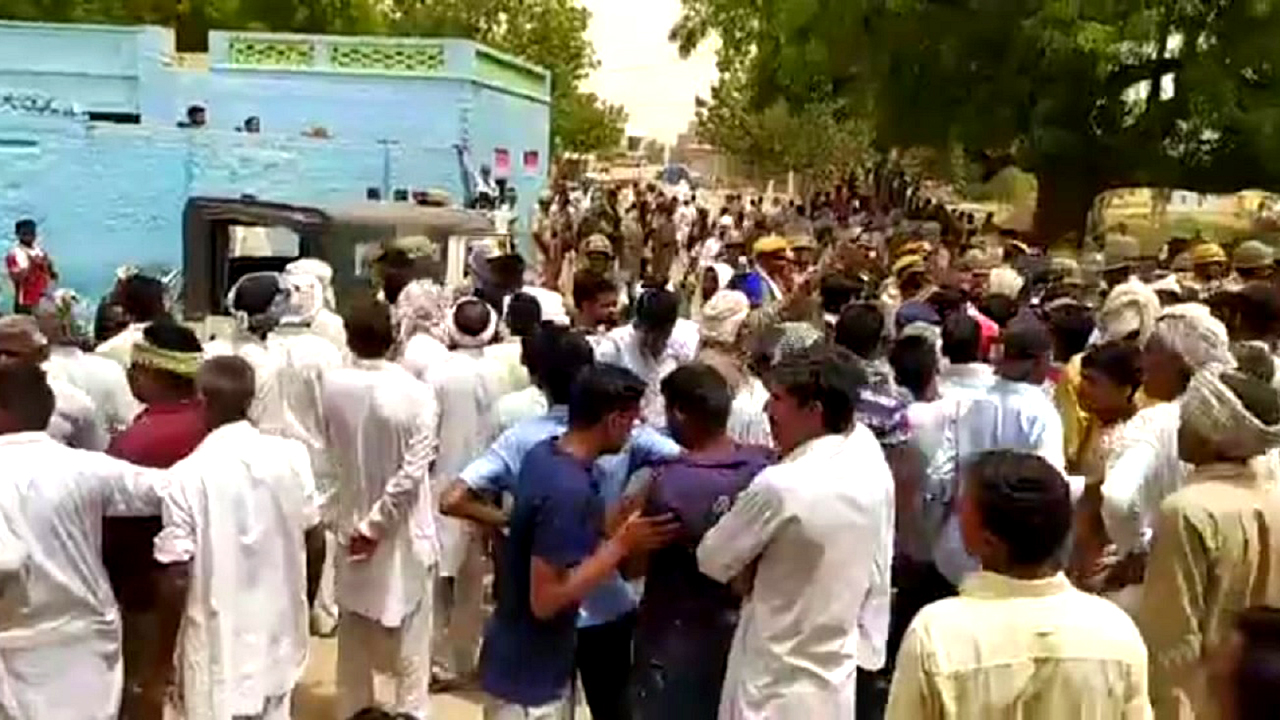 In scorching summer heat, household electricity connections cut off in a village in Rajasthan, protesters arrested

Since September 2019, villagers under the banner of Bijli Upbhogta Sangharsh Samiti, in Hanumangarh district of Rajasthan, have been peacefully protesting the arbitrary and extreme hikes in electricity bills. On 28 May, two activists of Bijli Upbhogta Sangharsh Samiti, Shailendra and Sandeep, were arrested for peacefully opposing the state electricity department’s inhuman action of cutting off electricity connections of bill-defaulters in Nethrana, in Hanumangarh district of Rajasthan. A groundXero report by Pritha Paul.

Since September 2019, villagers under the banner of Bijli Upbhogta Sangharsh Samiti, in Hanumangarh district of Rajasthan, have been peacefully protesting the arbitrary and extreme hikes in electricity bills. They say the price they pay for electricity has soared unreasonably and the people had no option but to “boycott illogical bills”. The issue of rise in electricity charges are related to the Rajasthan government’s decision to buy coal from Adani group at exorbitant high prices and pass the burden on the ordinary consumers. The issue is one that concerns the working classes of entire Rajasthan but has not received much attention either from the big media houses or even from the opposition political parties in the Congress ruled state. The latter have either opportunistically tried to use the movement to their advantage or have threatened the villagers to yield. Bijli Upbhogta Sangharsh Samiti does not associate itself with any political party. Its members and leaders are residents of the villages in the Hanumangarh District, primarily from the villages of Nohar and Nethrana. The Bharatiya Janata Party (BJP) in the state has been trying to claim credit for the people’s movement, which they want the public to believe to be a rejection of Congress and a support for BJP. Ironically, BJP has created the most leeway for corporates and capitalists to exploit the working classes through privatisations and different legislations, issues that the protesters of Bijli Upbhogta Sangharsh Samiti are staunchly against. On the other hand, Balwan Poonia, a member of Communist Party of India (Marxist) and the Rajasthan Legislative Assembly, recently threatened the villagers to stop their disobedience towards the government and aggressively “advised” them to pay the hefty bills demanded by the electricity distribution company. The problem that these politicians seem to be oblivious of is that the amount in the bills often exceed the income of the household. In Hanumangarh district, the residents have shown incredible courage and determination in standing up against the Government and the capitalists who have made life difficult for them.

For the past two and a half years several consumers in Hanumangarh have been on a civil disobedience movement against what they see as “rampant loot”. They say the price they pay for electricity has soared unreasonably and they are now refusing to pay. The Bijli Upbhogta Sangharsh Samiti, a committee representing power consumers, said the people had no option but to “boycott illogical bills”.

One of the protesters I met in January 2021 came to the protest along with her aged, tired and unwell mother-in-law. The latter insisted she tag along despite not being able to walk in the protest march due to her failing health. She sat on the pavement to rest for a while, and we sat with her. The daughter-in-law revealed that she has a busy day ahead and after the march she will head straight to the house in which she works as a domestic help. This is also the house from where she borrowed money to pay an electricity bill of Rs. 6165, an amount too huge for them to be able to afford. Thus, she has to work in the house until she can repay the loan. I wonder if that will ever happen. The bill she borrowed money for was only one of many and the amounts only seem to be rising. Another man had come to join the protest from 8 kilometres away. He too had taken a loan to pay his electricity bill. Most of the people who have not paid the bills had not paid them simply because they could not afford to. This hopelessness and disappointment is perhaps what gave rise to the spirit of resilience and persistence in them. Too often, officials from the electricity department come to the villages to cut off the electricity supply of the defaulters. Even in this scorching summer heat which has raised the temperature in Rajasthan to up to 47 degrees Celsius, every day, the villagers witness at least four to five hours of power outage either continuously or at intervals. The villagers are adamant. They continuously organise dharnas, sit-ins, marches, all peaceful but immensely resolute in determination. They refuse to give in. The Samiti has clarified repeatedly that they are not in support of any political party. The Samiti believes all of the mainstream political parties to have only one agenda, to secure votes from the general public and win elections. Once that is done, the people’s issues and aspirations are tossed aside and trampled over.

In January, news circulated that the government departments in Rajasthan did not pay electricity bills worth a total of Rs 14.83 crores. The villagers were outraged that they were being pestered for an amount of less than 5 crores when the government itself had dues they could not pay. The Congress-led government, however, has refused to engage in dialogues with the protesters, and is instead using state power to crush the spirit of the movement. Protesters are often detained from the protest sites on no valid ground and numerous false charges including that of disruption of peace have been pressed against them. On 27th May 2022, at around 2 pm, the protesters were called to the local police station in Gogamedi to be informed that the electricity department officials will be visiting Nethrana the next day to cut electricity connections of bill-defaulters and the police warned that they must not oppose the action. The protesters refused. In the evening, to prevent the people in Nethrana from organising protests and opposing the arbitrary decision of cutting off their electricity connections, summons were issued against 21 protesters under section 113 of CrPC, most of them the organisers, on the anticipation that on 28th May, they may disturb public peace and tranquillity or may engage in acts which may have similar effects. The summons directed them to be present at the Sub-divisional Magistrate’s court on 28th May 2022 at 10 am to show cause.

The protesters decided to hold a peaceful demonstration the next day against such unjust actions. On the 28th, protesters gathered in the local bus stand, awaiting the arrival of electricity department officials along with police personnel. Sumit Kumar, a Rajasthan High Court advocate and Johana, a social worker and activist arrived at the protest site from Jaipur to express their solidarity and assist the protesters legally. One of the members of the Bijli Upbhogta Sangharsh Samiti, Shailendra, announced that they have gathered to peacefully demonstrate against state injustice and that anyone who attempts to incite violence will be strictly ousted from the movement as that is not their agenda or aim. At around 8 am, the police arrived in huge numbers. Locals claim that there were about 300 police personnel and 500 protestors. Though the protesters were engaged in peaceful sloganeering, the police attempted to disperse them. At around 9 am, the police detained Sumit and Johana and at around 1 pm, they arrested Shailendra and Sandeep, another member of the Sangharsh Samiti. Still, the protest was not to be dampened. The villagers gathered at the police station and demanded their mass arrest. They raised slogans outside the police station and ultimately Sumit and Johana were released but Shailendra and Sandeep were kept in detention.

Meanwhile, electricity connection in around 800 houses in the village has been cut, and the metres taken away by the officials. 800 more houses await a similar fate. The village is drowned in darkness. On the 28th night, I spoke to Shailendra’s niece on the phone, a little girl of about six years of age. When I asked her what she was doing, she told me, “andhere me baithe hai” which translates to “we are sitting in the dark.” Is this not violence? Does peace only mean unopposed and unrestricted exercise of absolute power by the state-capitalist alliance against the ordinary people? Any resistance to that constitutes violence. But what about the peace that is falling asleep under the fan while reading a book on a summer night? What about the violence that is snatching away a good night’s sleep? The things we take for granted are unfortunately things that some others are fighting tooth and nail for. The villagers might be in the dark, but they are radiant in their struggle for their rights, and they bear the torch for the rest of us, showing that there is suffering in resistance but there is also strength, and above all, perhaps, there is satisfaction.

On 29th morning, the villagers gathered again at the local bus stand to demand the release of their colleagues. Shailendra and Sandeep were finally informed that they had been booked under section 151 of IPC and were presented before the magistrate. As soon as they were granted bail, however, they were taken into custody again owing to another FIR concerning the movement, under section 332, 504, 143 and section 353 of IPC. 10 other protesters have been named in the second FIR, but they have not been arrested yet. No one knows how many times the police will use this trick to keep the two protesters in jail. But the villagers are resolute. They will continue to demonstrate every day from 11 am to 5 pm, not only till their colleagues are released but until the false charges against all the villagers are dropped. The clock just struck 5:13, the villagers are perhaps heading towards their darkened homes shining bright amidst a very dark world.