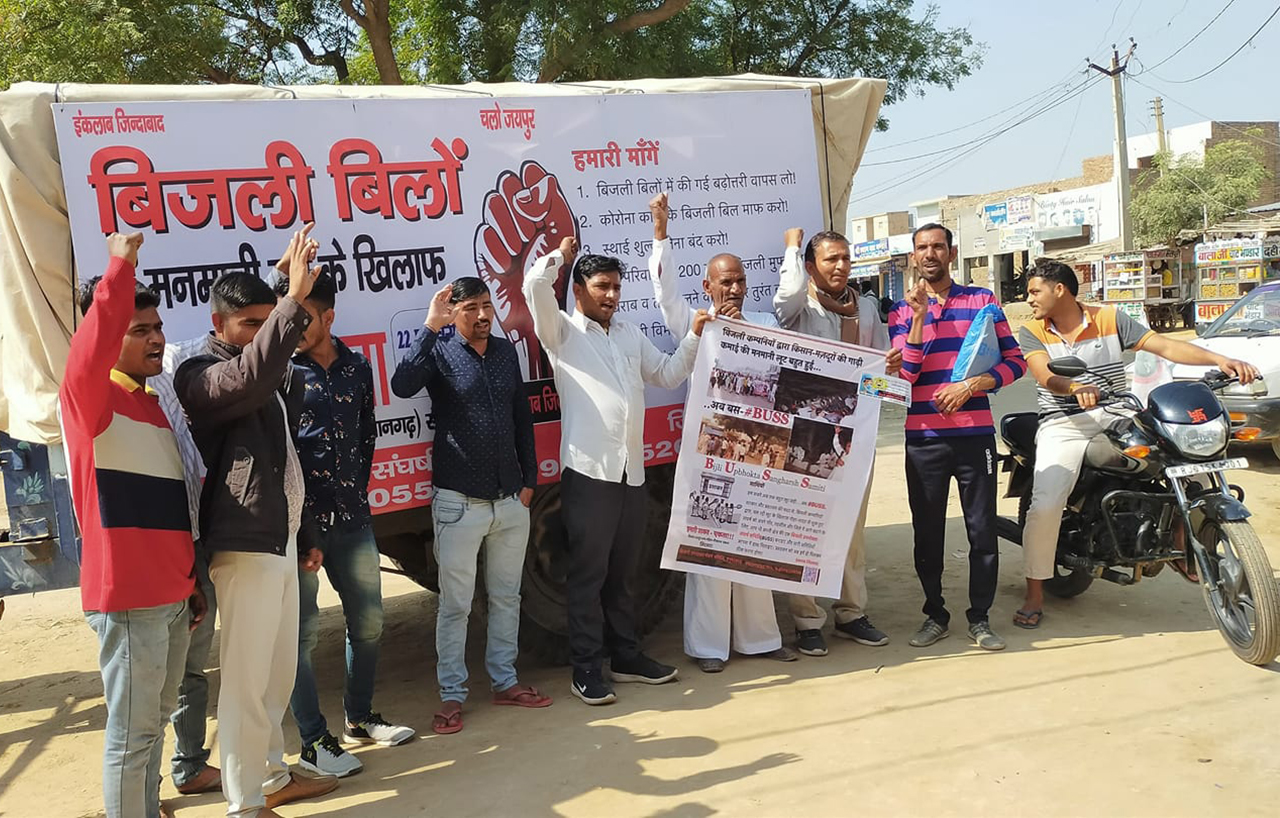 Power consumers in Rajasthan have been suffering from excessive hikes in electricity tariffs for the last few years. In several regions of the state, the people have stopped paying electricity bills not only as a form of the ongoing protest but also because they cannot afford to pay it. The entire incident points to the fact how the governments are privatizing public utility services for the benefit of the corporates like Adani at the expense of the common people, and how the people are organizing and resisting such measures. A Groundxero report.

Last Thursday Adani Power Ltd (APL) informed stock exchanges: “We would like to inform that the Hon’ble Supreme Court has dismissed the review petitions filed by Rajasthan DISCOMs in the matter of the SC Judgment dated August 31, 2020, pertaining to recovery of compensatory tariffs by Adani Power Rajasthan Limited, a wholly-owned subsidiary of the Company.” APL’s statement refers to a judgement regarding the long-term dispute between the company and three DISCOMs (public sector electricity distribution companies) in Rajasthan that caused massive hikes in tariffs for the electricity consumers in Rajasthan. On top of the anti-people repressive stance of the administration, the judicial discrimination is only going to add to the their plight.

For example, couple of weeks back, on the 8th March morning, a large team of officials from the Jodhpur Vidyut Vitran Nigam Ltd visited a village Nethrana in Hanumangarh district in Rajasthan along with a large police force. Their purpose was to disconnect the electric power connections of the villagers, who, according to the department, owed an amount of 1 crore 83 lakh rupees as unpaid electricity bill (EB) to the department. For what reason did the villagers let electricity bills amounting to such a large sum remain unpaid? The answer to this lies in pursuing privatization of public utility services by the state government to benefit the companies at the expense of the consumers. 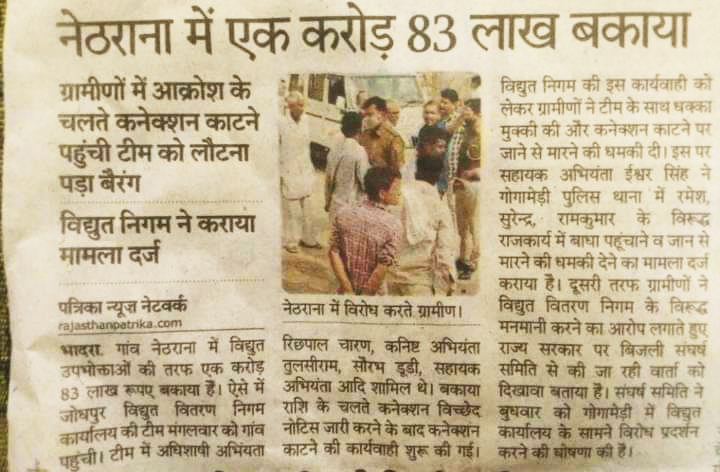 The story of EB hike in Rajasthan: Corporate-Government Nexus

According to a report published in India Today last year, “Rajasthan is among the worst-performing states in India in terms of heavy debt and transmission losses despite having a good generation capacity.” The residents of the state have been bearing excessive bill amounts with no support from any of the mainstream political parties beyond pushing election agenda. The mechanism behind the prolonged exploitation is to be found within the manipulation of the industries related to power supply by government-corporate partnership.

In this context, a specific partnership is of relevance, namely the one between the Rajasthan Rajya Vidyut Utpadan Nigam Limited (Power Corporation of the Rajasthan Government) and Adani Enterprises Limited, running the Parsa East and Kanta Basan (PEKB) coal block. A partnership that happens to be the single exception to the 2014 SC judgment cancelling all such collaborations. This partnership and in general the role of Adani enterprises around Rajasthan EB hike is a good premonition for the entire country, citing how big corporates control every step through which the end customers are forced to overpay for the products they avail, including basic necessities. 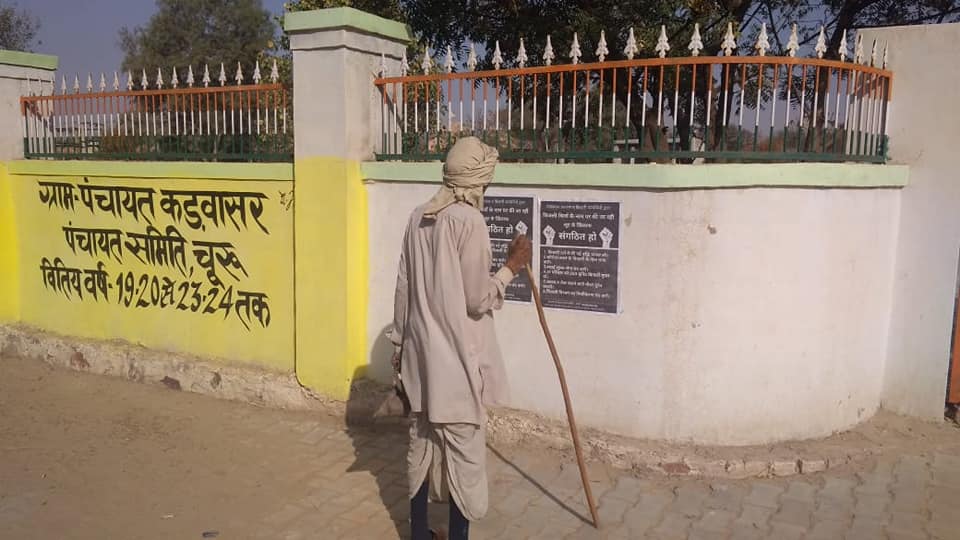 As for the story of EB hike in Rajasthan, a 2008 bidding, won by the Adani Power Rajasthan Ltd (APRL), could be seen as the beginning of the plight for the consumers. The State Government of Rajasthan, the Central Government and APRL – each had a role to play in aggravating it. For example, once Adani Power Ltd received the contract, it was the Rajasthan Government that sited insufficient surplus coal, partially violated its own MoU signed with the APRL and refused to allocate domestic coal to APRL from the PEKB coal block. Consequently, the APRL imported the more expensive Indonesian coal and claimed compensation for its loss, though it has also been alleged that APRL had overpriced the purchase. The situation worsened when the Jodhpur, Ajmer and Jaipur DISCOMs lost their case against APRL in the Supreme Court and were thus liable to pay a compensation amount of more than 2500 crore rupees to APRL, following an interim order issued by the Appellate Tribunal for Electricity (APTEL) in September 2018, later upheld by another order issued by the Rajasthan Electricity Regulatory Commission (RERC). 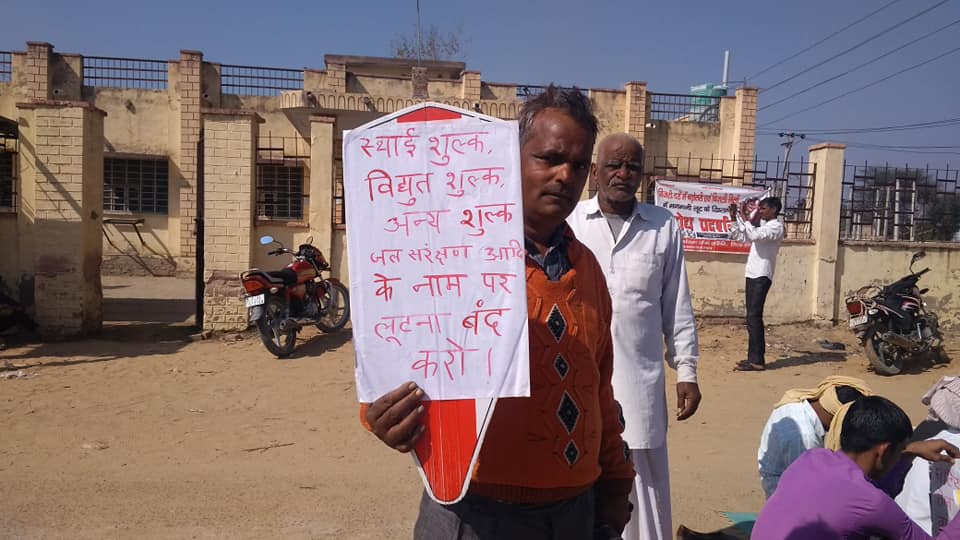 All these orders in favour of the APRL have been questioned and challenged legally, given the fact that the huge compensation is effectively being extracted from the 1.2 crore power consumers of these DISCOMs, who in turn raised the power tariff by 11%. The consumers were forced to pay electricity bills at a higher rate i.e an additional amount of 95 paisa per unit as tariff and 115 rupees as fixed monthly charge. The hike was expected to yield an additional Rs 4,800 crore annually for the state government. 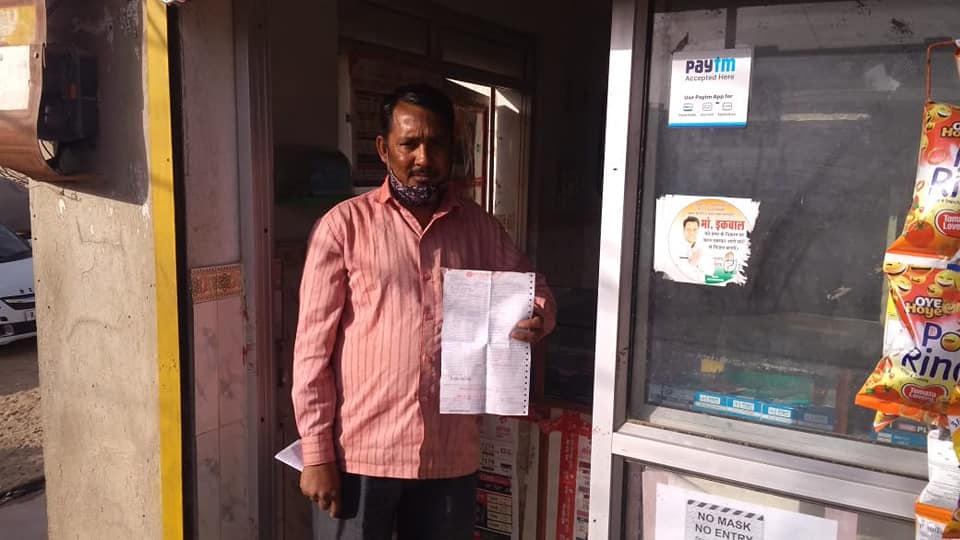 The September 9 demonstration was attended by about 700 people from 40 villages. Within four days, a 57-day sit-in and a relay hunger-strike followed in front of the subdivision office in Bhadra. During this period, the Sangharsh Samiti organized public meetings, submitted memorandums to the tehsil offices, and the idea of public boycott of electricity bills began to spread in the area. But despite two months of such protests, the SDM refused to speak to the protesters. The Samiti began to prepare for campaigning in the entire Hanumangarh district. 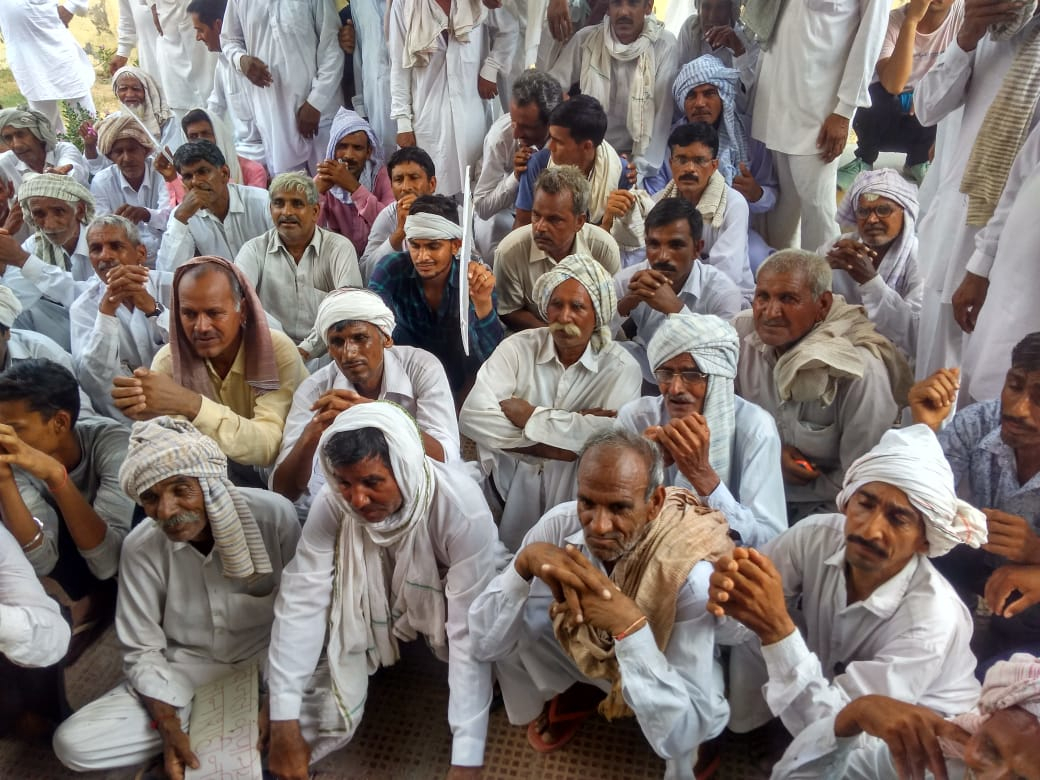 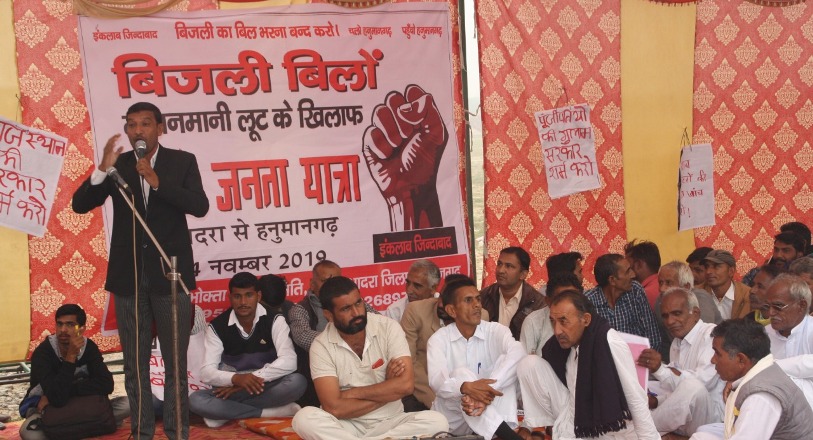 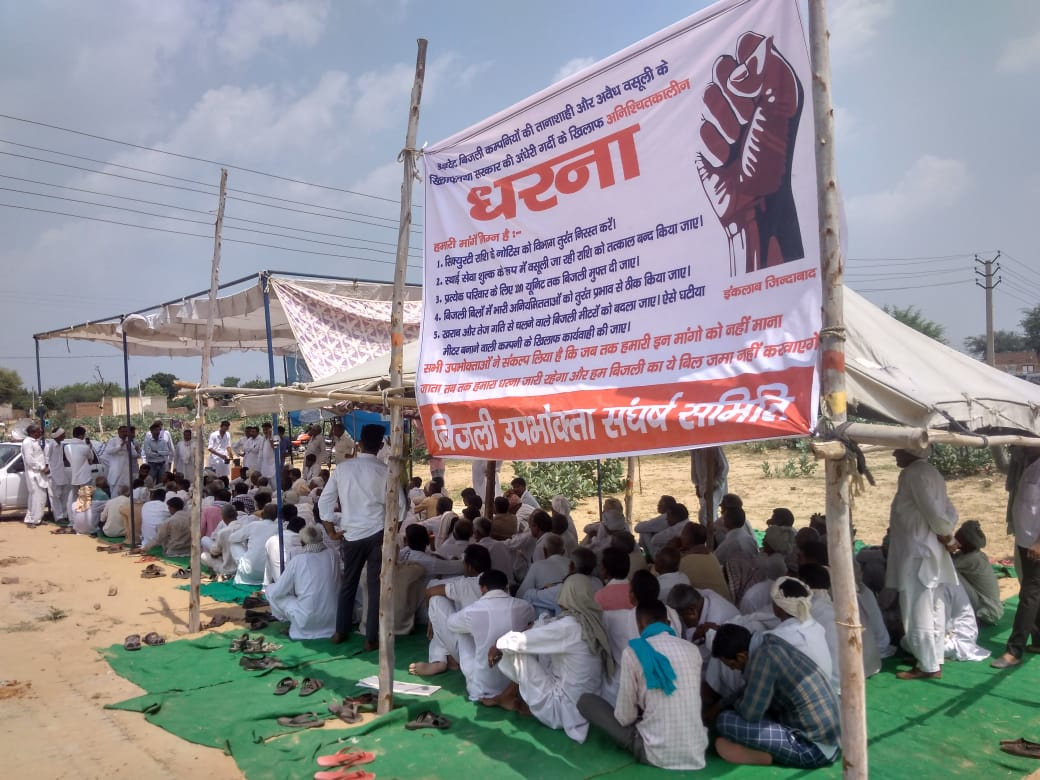 In March 2020, the administration initiated a negotiation talk, for which hundreds of people arrived. Some demands were accepted, but not all. Moreover, the repression on people continued even during the corona period. Once the lockdown was lifted, even though the struggle was intensified in the district, further attempts by the protesters to meet the administration remained fruitless. 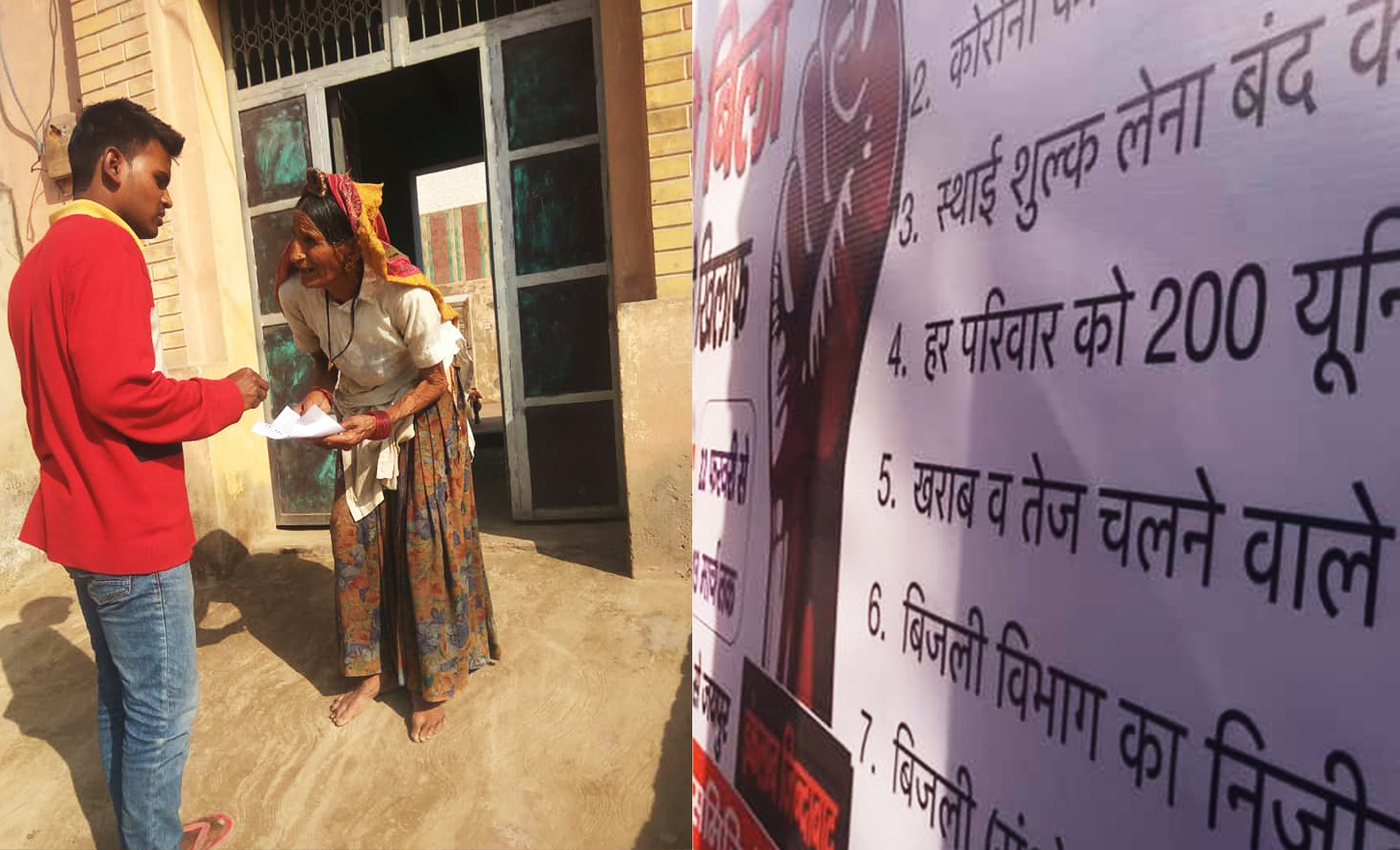 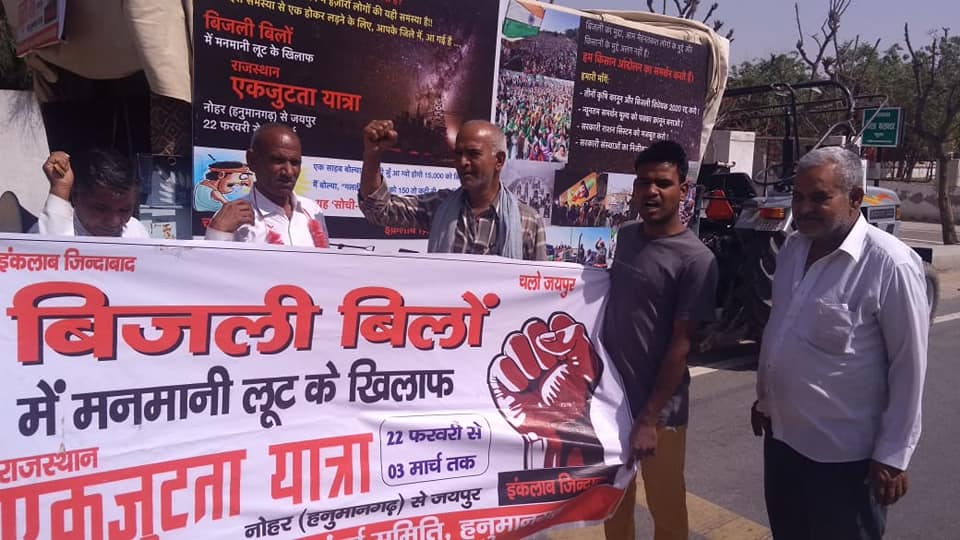 Privatization of the power industry: Not only EB hike but casualization of jobs

According to the protesters, the struggle against EB hike and farm bills are the same. Both are fighting the loot of resources by private companies and the anti-people neo-liberal policies of the government:

“During the last one and a half years and throughout this journey, we have not found a single area, where people have not been disturbed by illegitimate electricity bills. There is resentment against this loot everywhere and in many areas there are different types of struggles active against it. Many have stopped paying bills – not only because they are angry, but they can’t afford it. A BPL family consisting of only one [female] member received a bill of 23,000 rupees. The house has one fan and one bulb and when the Samiti raises the issue, the bill is reduced to 1,600 rupees, acknowledging that it was a mistake! Perhaps all of this is a big mistake and the 1500 rupees bills should actually come to 150 rupees! The punitive tax treatment of the DISCOMs, power companies and administration is also rampant; people are being subjected to imposition of arbitrary bills, notices, threats, power disconnection, removal of meters etc. Apart from electricity, people are also facing a myriad of everyday issues such as water scarcity, poor roads, environmental change, heavy unemployment, inflation, difficulties of online education. In this situation, people have welcomed the path of struggle and have taken steps towards joining the movement.”

In the past years, due to privatization of the DISCOMS, jobs have increasingly become temporary in the Electricity Department. The Sangharsh Samiti has received support from a part of the casual and contract workers of the department as well.

The Congress government in the state of Rajasthan has been adopting double standards in this matter. On one hand the party is advocating support for the farmers – whereas in Rajasthan where the party holds the power, it is allowing the people to be looted by the private companies.

Not that there is anything else to be expected. Whether it is AAP protesting against EB hike in Punjab, or UDF protesting against LDF in Kerala for the same, or BJP burning electricity bills in Maharashtra, none of these parties have a principled stand in the matter. They only cash in on public grievances and oppose when in opposition with electoral motives.

Criminalization of protest continue in Hanumangarh; so does the struggle

Let us come back to the morning of March 8, when a team of officials visited Nethrana village to cut the power supply. As was the norm, before the visit the area was disconnected to stop the villagers from using loudspeakers and gather in protest. Nevertheless, the villagers managed to come together and stop the officials from accomplishing this task. The incident was duly termed as an act of crime. Inder Singh, an officer in the Vidyut Vitran Nigam Ltd, filed various charges including ‘attempt to murder’ at the Gogamedi police station against several protesters, including village elders.

Right at that moment, a part of the Sangharsh Samiti was in Jaipur. They had already met the Power Minister Bulaki Das Kalla, who had in turn referred the Samiti to the Chief Secretary Dinesh Kumar and assured that the matter will be taken into consideration by the government. Accordingly, the Samiti was preparing to meet the Chief Secretory. Why would protestors in Nethrana be subjected to such treatment while a negotiation was on its way? Could it be an attempt to take advantage of the absence of a part of the Samiti? – asks the protesters as they sit unintimidated, determined to continue the struggle despite offensive actions on the administration’s part. 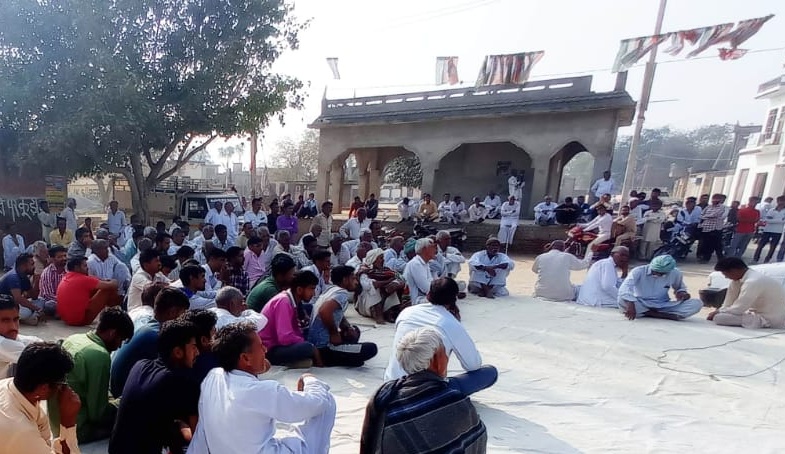