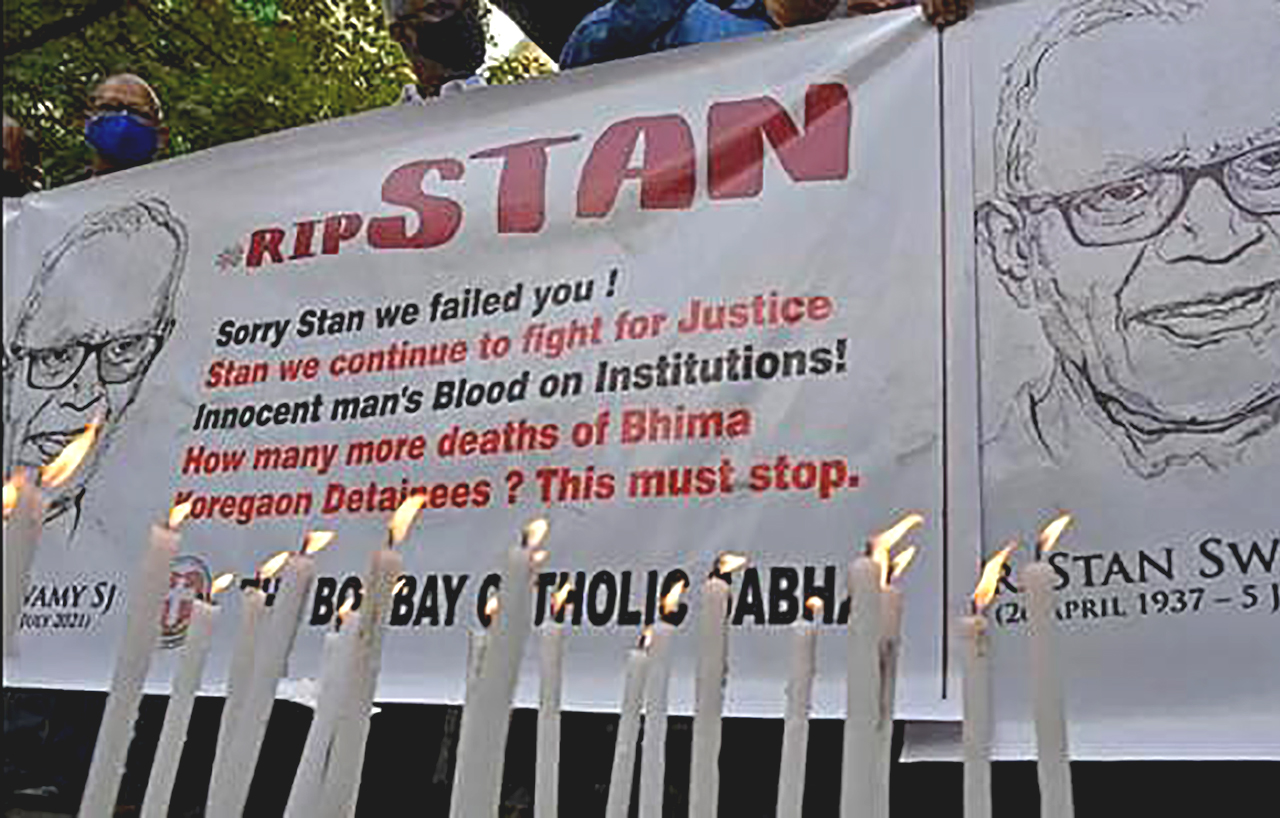 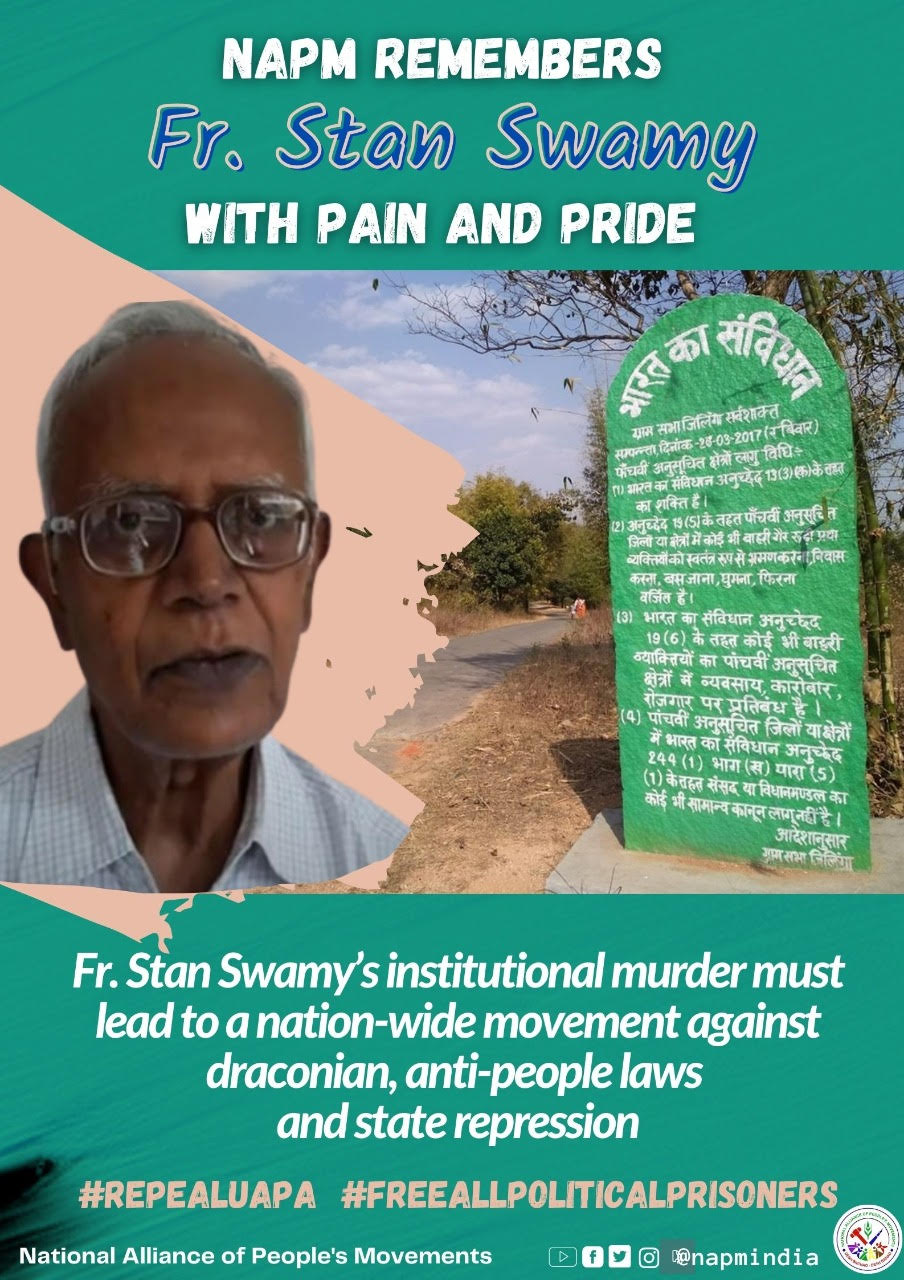 The news of the cold-blooded killing of Fr. Stan Swamy by all the institutions that held him arbitrarily in custody for over 9 months has shaken not just the ‘conscience’ of India, but of the entire world. This incident shall remain a permanent blot on India’s claim of being a ‘democracy’, which oversaw the custodial torture and consequent ‘death’ of an 84-year-old human rights defender, living with Parkinsons, for a crime he never committed. As the world mourns this spartan saint, whose only mission was to fight for justice for the oppressed, we are left with many unanswered questions about the state of our nation and the future path of struggle.

Hailing from Tamil Nadu and moving into faraway Jharkhand, Stan spent many decades of his life amongst dalits and adivasis, learning from and engaging with their everyday struggles against state and systemic oppression. A firm believer in the power of peace and constitutional rights, he fought until his last breath against forced land and resource alienation and for justice to thousands of undertrial adivasis, rights of Gram Sabhas under PESA and release of all persecuted prisoners. He also earned the ire of the BJP Govt and the NIA for his powerful role in solidarity with the Pathalgadi self-rule movement and his well-researched PIL seeking the release of more than 4,000 adivasi undertrials across jails in Jharkhand.

While we all are inconsolably mourning the killing of Stan by the Centre and the NIA, it is a matter of some relief that this moment has indeed become an occasion for national and international outrage, spontaneous protests at hundreds of places and has set stage for the world-at-large to know more about Stan’s meticulous body of work and the injustice meted out to adivasis and dalits either due to dispossession and displacement from their lands and forests for corporate projects & profits, denial of fair rehabilitation or false incarcerations for extended periods.

For the first time, in over 3 years since the fake Bhima Koregaon (BK) charges were filed and arrests made, leaders of 10 political parties have written to the President of India, calling upon him to ensure that the BJP Govt. releases all persons arrested on politically motivated charges in BK or other cases, under UAPA. While this is a delayed welcome step, we do know that unless these parties (many of who have been in favour of UAPA) take a clear public position against UAPA, their limited pleas will not have an impact. It is high time all parties and groups which feel that democracy and opposition in India is being throttled by the BJP, must take an open and unambiguous stand against UAPA and sedition.

We record our appreciation for the efforts of the lawyers in this case as well as the occasional benevolent interventions of the Court (such as shifting Fr Stan to Holy Family Hospital). However, we cannot but convey out deepest angst at the manner in which the judiciary, in general, has chosen to deny bails to most political prisoners in the UAPA matters (including Stan), even as trials are pending for years and years! Despite glaring evidence like the Arsenal reports pointing to how the accused activists have been implicated in a malafide manner, neither was the trial process hastened nor were bails granted, especially to the elderly and sick, in Covid times! We hope, even if posthumously, the Mumbai High Court takes up, in right constitutional spirit, the legal challenge Fr Stan has posed to Sec 43 D (5) of UAPA, which makes bail provisions extremely stringent. This would have an implication for the release of all others arrested as well.

From Gandhi to Gauri or more recently Mahavir Narwal to Fr. Stan, we all know that the ideological killers of all these brave-hearts are the same. On the one hand, their singular aim to convert this nation of diverse identities into a monolith Hindu Rashtra needs to be confronted and defeated head on. On the other, their pro-corporate agendas of pushing ahead the Farm Laws and Labour Codes needs broader resistance. The 7 months strong farmers’ movement is a stellar example of mass people’s resistance.

Our challenge lies in building and supporting similar, collaborative and sustained movements of the working class and oppressed peoples, against dilution of labour laws, environmental laws, draconian laws, corporate attacks and resource loot in Schedule-V areas as well as for ensuring accessible public health, education and livelihood, income security for all. Human rights defenders, social activists, people’s organizations are facing an unprecedented clamp down today. Only a united and defiant push-back by all democratic forces can keep the fascists and authoritarian rulers in check.

Stan has fought his battle powerfully and moved on. Taking inspiration from him, it is now for us, as a people, as a nation, to decide how do we take the struggle ahead. We hope that all the current outrage is channelized constructively into a nation-wide and sustained movement against draconian, anti-people laws and state repression. Laws like UAPA and Sedition which have always been invoked to persecute political activists must be repealed summarily. Institutions like NIA that are an affront on the federal spirit need to be disbanded.

The right to bail, even in UAPA matters, as powerfully upheld by the Delhi High Court recently must be widely publicized and understood as flowing directly from constitutional liberties. Right-wing hate-mongers, be it in the Elgar Parishad case or in the anti-CAA protests, who even now are continuing to vilify deceased Stan and other activists, are the ones who need to be behind bars. A broader movement for release of the Bhima Koregaon 15 as well as all political prisoners, including adivasis, dalits, muslims, transgender persons across the country and prison reforms is the need of the hour. Let us all join forces and work collectively to build upon the momentum for addressing all these.

We also extend our solidarity to the grassroots movements in Jharkhand who are committed to taking forward the work initiated by Stan, including the release campaign of more than 4,000 adivasi undertrials and preserving the Bagaicha resource space in Ranchi, nurturing it as a centre of political learning and action. Acknowledging the empathetic statements by Jharkhand CM both after Stan’s arrest and his departure, we call upon the Hemant Soren Govt. to take a clear stand against UAPA, furnish truthful affidavits in the Ranchi High Court on the PIL filed by Fr Stan and facilitate the early release of all adivasi prisoners across jails in Jharkhand. That would be a true salute to the departed soul of Stan Swamy. Johar.