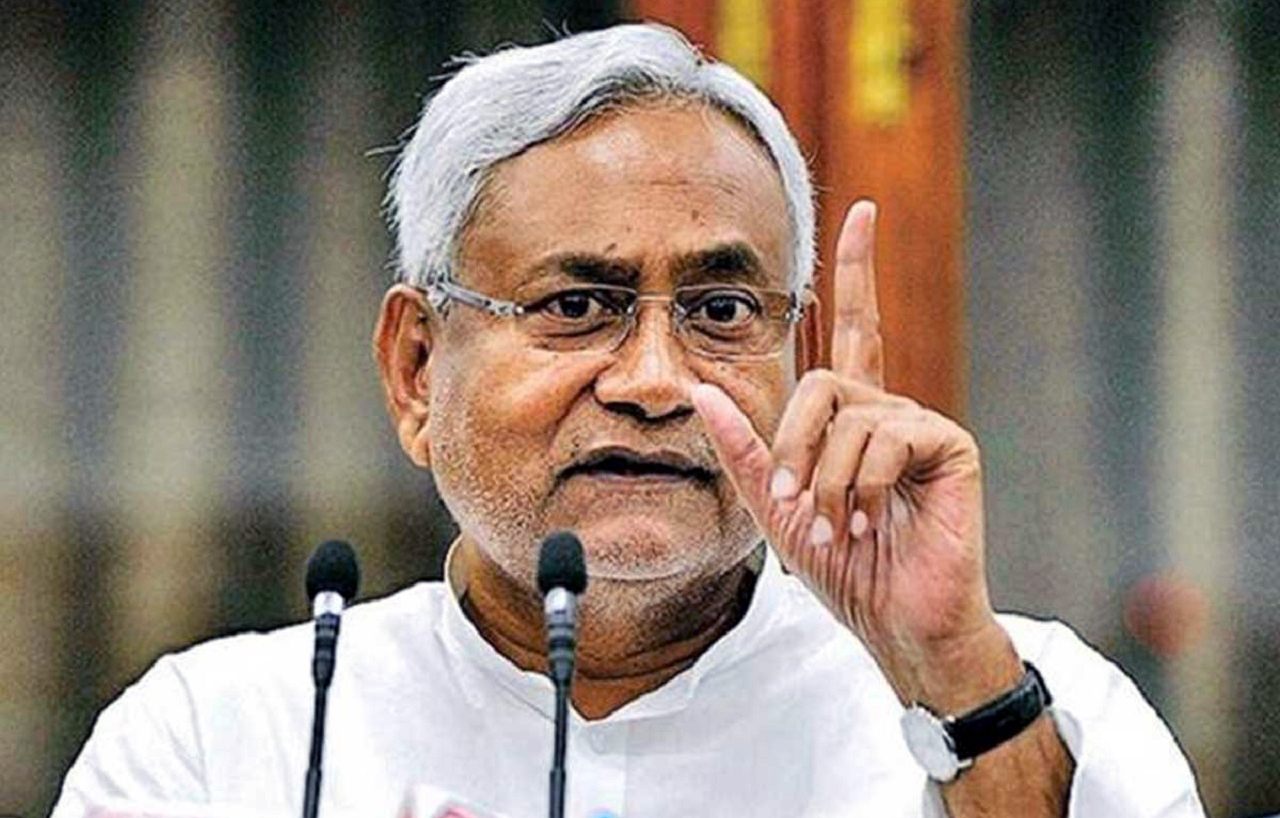 In Nitish Kumar’s BJP-backed rule in Bihar, the state police has issued a circular stating, henceforth, no government jobs and contracts will be given to persons booked by the police during staging protests against the government. A report by Anish Ankur.

Nitish Kumar’s current tenure as Chief Minister of Bihar is proving to be very challenging, as he is having to face not only an emboldened opposition led by Tejaswi Prasad and the resurgent left parties, but also the general restlessness and the anger of the masses, particularly the youth, who now are demanding that the government  fulfil its promises made before the elections. The youth are already out on the streets asking him about the 19 lakh new jobs. They are no longer ready to be hoodwinked by the old divisive communal and casteist rhetoric.

Nitish Kumar, reduced as he is now, to a junior partner of the BJP, has his hands tied by the big brother. He knows the promises were ‘jumlas’ or lies told to win the election. He has been left with no option, but to learn from the political masters’ methods of handling the farmers’ protests in Delhi, and he is now trying to use them in Bihar, to curb the growing resentment of the masses against his rule.

The two recent police orders issued by his government — criminalising ‘offensive’ social media posts, and now, denial of government jobs and contracts to persons staging protests against the government — show that he has chosen the path of curbing peoples’ right to express views and demands through undemocratic and authoritarian administrative measures to keep the Big Brother happy and thus ensure his own chair.

Not even a fortnight has elapsed since the passing of the new social media dictum that the Nitish government has issued another controversial directive. According to a new circular issued by the Bihar state police on February 1, from now on, government jobs or contracts will not be given to those who have participated in anti government protests. The order has triggered a political storm in the state. Opposition parties as well as the civil society in Bihar are vehemently criticizing this order. Ever since the political weight of BJP has increased within the ruling NDA alliance, such draconian orders are regularly being issued with an aim to restrict the increasing popular discontent of the masses in general and the youth in particular.

The directive issued by the police headquarters, on 30th January said “If anyone is found to be involved in a law and order situation, staging protest, road blockade etc., and in a criminal act against which police file a charge sheet, that will be clearly mentioned in his conduct or character certificate. These persons should be ready for grave consequences because they will not get government jobs and contracts.” It also directs station house officers (SHOs) to mention in the Police Verification Report (PVR) any charge-sheet issued against persons involved in cases related to road blockades or destruction of public property. It also says “If a person has been found guilty by any trial court, the same should also be mentioned in the PVR.” 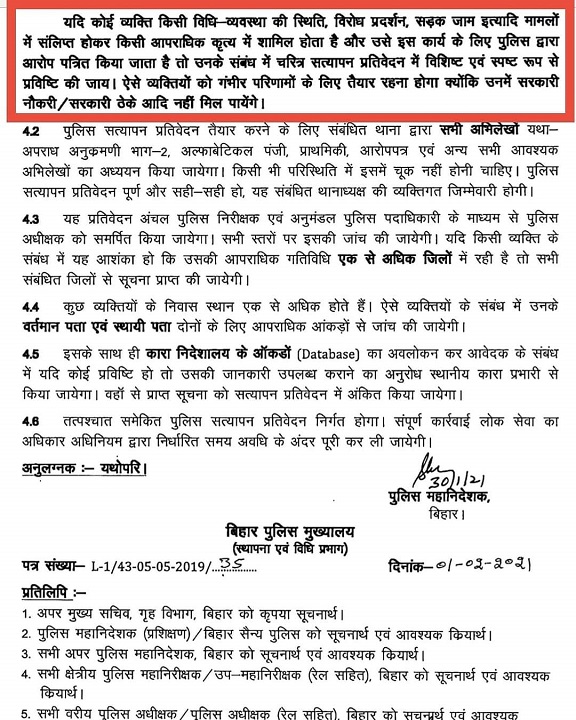 This is the second police circular within a fortnight that has generated political heat in the state. Earlier, on January 21, the Bihar Police had issued a similar notification that said ‘offensive’ social media posts against the government, ministers, MPs, legislators and state officials would be treated as a cybercrime and invite penal action.

The latest directive signed by DGP S.K Singhal states, “If any person is involved in any criminal act by engaging in any law-and-order situation, protests, road jams and are charged by police for this, specific mention of this will be made in the PVR by SHOs.” Such persons will find it difficult even to get a license for a firearm or a passport. Under the new directive, nine services have been identified that would require the Police Verification Report. These are, license for firearms, passport, character certificate, contractual jobs in government, work contracts in government departments, boards and commissions, licences for petrol pump and gas agency, government assistance or grant and bank loans.

ADG (headquarters) Jitendra Kumar on Wednesday told reporters, “If a person has been involved in a criminal activity and there is a record of it, we will mark it in their PVR. Based on it, employers, be it government, private sector or semi-government, can decide as per their discretion and policy if they want to hire them.”

The latest police circular is being met with harsh reactions from political parties. Leader of Opposition Tejaswi Prasad Yadav criticised the directive and accused Chief Minister Nitish Kumar of acting like a dictator. Expressing his resentment, he tweeted “Nitish Kumar is providing competition for Hitler and Mussolini. He says anyone resorting to dharna and demonstration will be debarred from government jobs and tenders. It means he will neither give jobs nor allow any protest. He seems to be getting increasingly afraid,” Tejaswi Yadav also added “Protesters cannot demonstrate at designated places. People have been sent to jail for writing against the government. Nitish ji, we understand that you are completely tired. But at least, have some shame.”

Countering Tejaswi Yadav’s argument, BJP spokesperson and former MLA Prem Ranjan Patel commented “Tejashwi Yadav perhaps doesn’t know this is a very old order whereby one has to procure a Character Certificate for government contracts and jobs. Everybody has the right to protest in democracy but not at the cost of damaging the public property. Tejashwi himself violated the rules by instigating the demonstrators recently.”

Senior RJD leader Shivanand Tiwari also condemned this order “Nitish Kumar is following the Centre’s policy of terming protesters as anti-nationals. The Bihar government is trying to snatch away the democratic rights of the people.”

Ruling party JD (U) spokesperson Rajiv Ranjan Prasad defending the move on law and order grounds said, “there is nothing unusual with the new circular of the Nitish Kumar government of denying government jobs and tenders to protesters. If anyone is involved in a protest supporting any criminal act or involved in it, it is obvious that making these people a part of government administration or providing them government tenders will break people’s belief in law and order.”

Terming this order as Bihar model of dictatorship, CPI (ML- Liberation) national general secretary Dipankar Bhattacharya said “Just like the dictatorship of Narendra Modi, Nitish Kumar is developing the Bihar model of dictatorship. Just a few days ago, Nitish Kumar criminalized critical social media posts against the Bihar government. Now the young people will not get government jobs if they take part in protests against the government. This move is a conspiracy to end our right to dissent. Our party   has demanded immediate repeal of this order.”

In the same tune CPI (M) state secretary Avadhesh Kumar termed the circular, an outright attack on fundamental rights. He said “today teachers are struggling for their reinstatement, youth are unemployed, health-workers, students, farmers, labourers, government servants and women are all fighting with the government for their demands. The Bihar government, instead of heeding to their demands, has come up with a ‘Tuglaki Farman’ which is highly undemocratic.”

This circular have not only outraged political circles, but even the civil society groups have expressed their anger. Various forums committed to democratic rights and civic concern have come out openly against this circular. As Nandkishore Singh, a senior member of Patna based ‘Citizens Forum’, pointed out “For the last one decade, the Bihar government is encroaching upon the democratic rights of the people. The government is regularly taking anti-people measures but the masses are no longer prepared to accept these policies which are highly detrimental to their interests. As the BJP influence is growing in this present government it is resorting to such harsh undemocratic measures because people are showing signs of increasing restlessness. Almost every day they are agitating, protesting and organizing road blockades. The participation of youth in these resistance movements is also increasing. Therefore to silence the youth, this high handed order has been brought. It’s simple aim is to prevent the young people from taking part in anti government protests.”