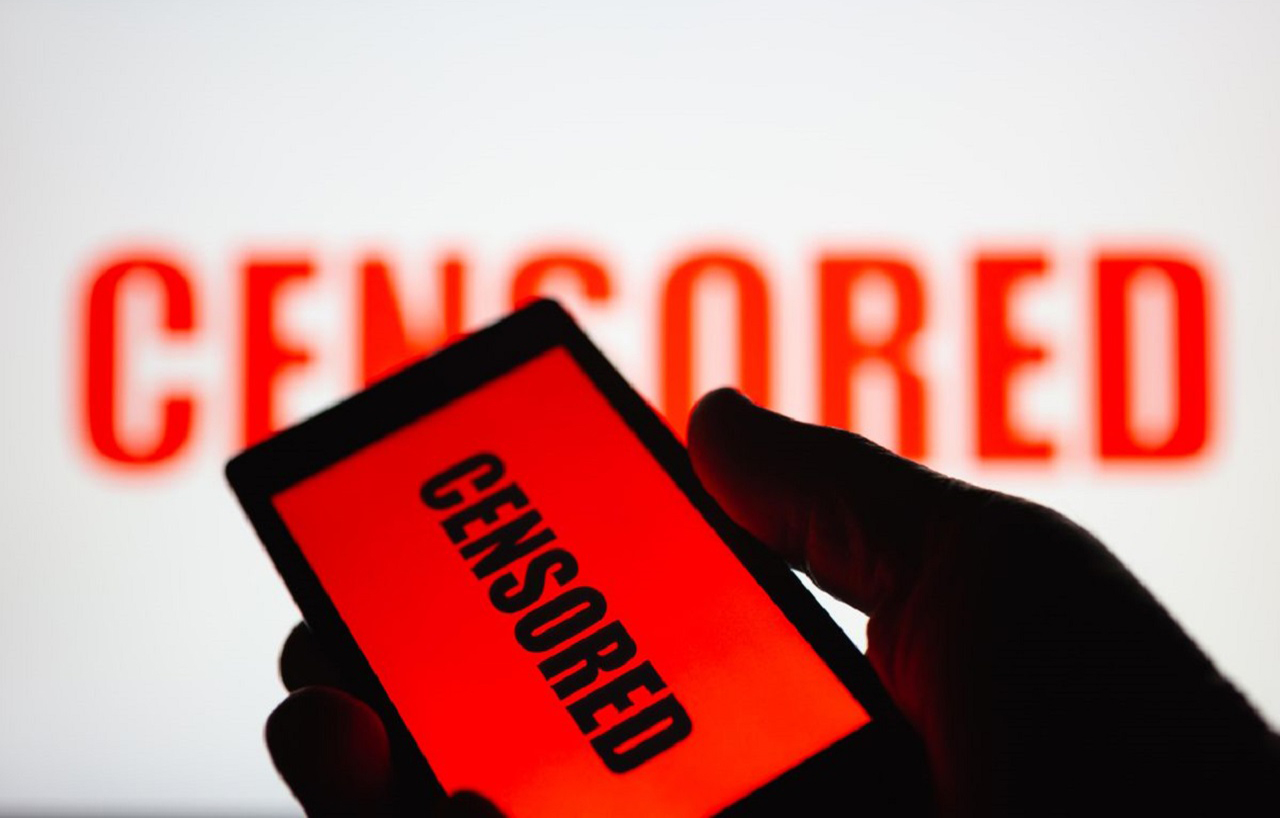 The Bihar government’s recent circular treating “offensive” social media posts as an act of cybercrime points to the dismal state in which the media as a whole has to operate in the state for a while now, writes Anish Ankur from Patna.

After print and electronic media, the social media has become the latest target of Bihar government. Ever since the NDA government came into existence in Bihar in 2005, the media in the state has had to operate within an environment of serious censorship. The recent government’s recent order regarding treating “offensive” social media posts as an act of cybercrime points to the dismal state in which the media as a whole has to operate in the state for a while now. Print and electronic media are more or less controlled by the advertisement policy of 2008. Social media, which operated under different norms, is now being controlled through the recent circular. The sorry state of affairs in Bihar have drawn the attention of even the Press Council of India (PCI), which had constituted a committee to investigate the precise nature of government pressure on media in Bihar.  Like in the past, Nitish Kumar government’s this order too has come under severe criticism from opposition parties as well as, the civil society at large.

“Offensive” in Bihar is a highly politicized word. If you put out comments or posts on social media like Facebook, Twitter, Whatsapp etc, criticizing the government ministers, MLAs, MPs or government officials, you can land in trouble. The latest circular to this effect has been issued by the Additional Director General (ADG) Nayyar Husnain Khan, the head of Economic Offence Wing (EOU), the nodal body for cyber-crime. 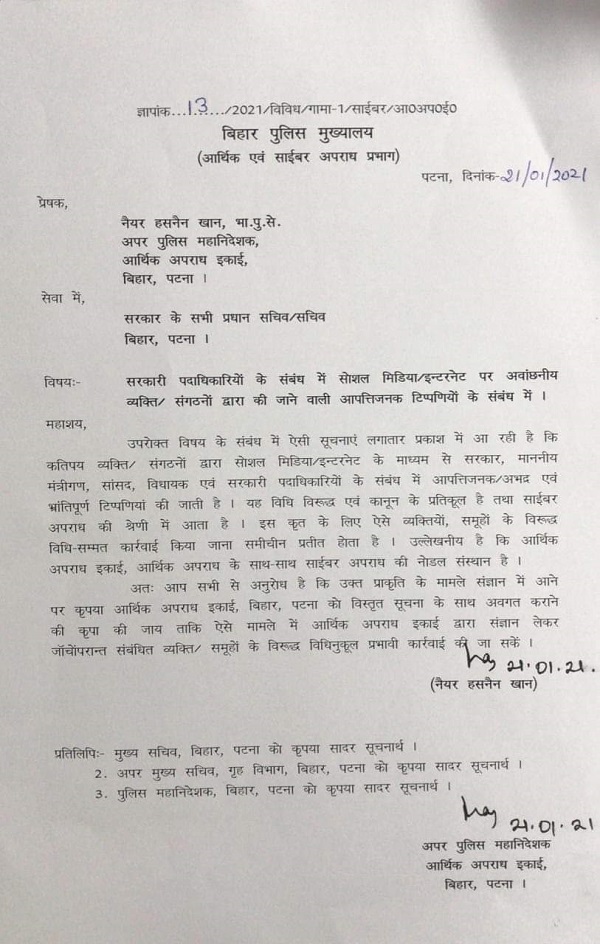 Copy of the controversial circular

The circular issued by ADG (EOU) to all principal secretaries, states

“Such acts are against the law and come under the category of cybercrime. It is imperative that appropriate action is taken against such acts and persons putting posts having offensive/abusive tenor. So, it is requested to all that on information of any such offensive posts in the social media, the EOU is informed so that an inquiry is made and necessary action, as per law, is taken.”

“We will act against any attempt to malign the image of any political leader or government official if the department receives a complaint from the victim. The EOU would lodge an FIR after proper enquiry against the accused under the Indian Penal Code (IPC) act and the Information Technology (IT) act.”

One of the two Deputy Chief Ministers of the state, Tarkeshwar Prasad (BJP), praised the government’s decision by saying that, “It is an important step, as these days one can see, how people put up objectionable and offensive posts against government officials and anyone on social media. This is wrong and needs to be checked.”

The moment this police order became public, the Bihar government came under fire from political parties as well as by the civil society groups. RJD leader, Tejaswi Yadav, dared the Chief Minister to arrest him under the new directive after accusing him of promoting corruption and patronizing criminals. He also alleged that Bihar police was involved in illegal sale of liquor.

In a press statement, Dipankar Bhattachrya, the General Secretary of CPI (ML- Liberation) underlined the context of this order

Crime and injustice are on the rise again in Bihar, promised jobs are missing; people are demanding justice and responsive governance; and the Nitish Kumar government responds with a gag order to throttle the freedom of social media users.

According to Anil Kumar Roy, associated with ‘Citizens Forum’, Patna

“Under the law, only those involved in the government are ‘honourable’. The rest of the people have no ‘honour’. It is therefore a ‘crime’ to make blasphemous remarks on the honourable.”

“But those who are “honourable” can lie. They can declare anyone as “traitor,” “Khalistani,” “Pakistani” etc., can chant ‘goli maaro saalon ko’ .They can also put up fake messages and information in matters related to national security. These “honourables” are beyond laws while the common man is thrown behind bars. This decree of Bihar police has shown the secondary status of the common citizen.”

The current order reminded people of Jagannath Mishra’s infamous ‘Bihar Press Bill’, 1982. At that time, the then Chief minister of Bihar, Jagannath Mishra, tried to control media because, in the post- emergency period, a host of committed journalists came out from the Socialist, Communist, Naxalite and JP movement, with activist backgrounds, and played important roles as journalists not only within the state, but also in several other parts of the country.

Therefore, when the Jagannath Mishra government tried to gag the press, the journalists in Bihar fought tooth and nail to preserve the freedom of the press. The journalists were joined by other sections of the civil society, and consequently, the bill had to be withdrawn.

Currently, given the fact that all the major news dailies are under strict government control ever since Nitish Kumar came to power, social media platforms like Facebook, Twitter, Instagram and Whatsapp are the only options left before the people to express their opinion regarding the wrongdoings of the government. The current circular is taking even that limited power away from people, thus, going against the basic foundational norms of a democracy.

Taking advantage of such an overall environment, the government uses its status as a primary source of ad-revenue, to arm-twist the media houses to function as its undeclared mouthpieces. It is not a surprise, then, that the press in Bihar has often functioned without much freedom. Its ability to be critical of the government has often been seriously compromised, and the situation is nearly a total erasure of the principles of press freedom, and the kind of journalism that has emerged therein, cannot, by any means, be called ethical journalism. In other words, the media has failed to be the “watchdog of the rulers.”

At that time, the leader of the opposition in the Legislative Assembly of the state, Abdul Bari Siddiqui had alleged,

The Advertisement Policy-2008 was prepared by bureaucrats and never tabled in the Legislative Assembly of the state for consideration. Having been obliged by the government advertisements, the newspapers either avoid publication of news related to crime, ransom, land grabbing by the leaders of the ruling establishment or their supporters, murders, and the activities of the land mafia, or they are underplayed and published in brief as small news items.

The government is paying the cost of keeping the newspapers mum by implementing a centralised advertisement policy in the state, under which advertisements are being given arbitrarily to the favoured newspapers.

This statement of Abdul Bari Siddiqui, the leader of opposition, was recorded before the Press Council of India (PCI) constituted Fact Finding Committee. This Fact Finding Team (FFT) was constituted in 2012, after PCI received several complaints regarding the pressure exerted on the media in Bihar by the state government. There were reports of unrest prevailing amongst the media fraternity in the state, stories of journalists being harassed and humiliated were circulating within the civil society at large.

The control over media and newspapers has always been the hallmark of Nitish Kumar’s government. He had to face the wrath of Justice Markendu Katju when he was the chairman of the Press Council of India. In 2012, Markendu Katju, then as chairman of Press Council of India, in a gathering at Patna University campus, remarked that there was no press freedom in Bihar, and that this was not the case when Lalu Prasad was the chief minister. As Katju was speaking, the then Patna College Principal Lalkeshwar Prasad Singh, who also happened to be the husband of ruling JD(U) MLA, raised objections and made allegations against Markendu Katju about his prejudiced view regarding the NDA government. Owing to his proximity to the ruling party, Lalkeshwar Prasad was made Chairman of Bihar School Examination Board (BSEB). However, he was arrested in the ‘topper gate’ scam in 2016.

Markendu Katju, then, had constituted a three member committee comprising of Rajeev Ranjan Nag, Kalyan Barua and Arun Kumar, on 24 Feb, 2012, to look into the complaints and submit its findings.

During the course of the enquiry, the Fact Finding Team visited Patna, Muzaffarpur, Munger and Gaya. The PCI even put out advertisements in local dailies, including Bihar editions of major newspaper publications, as part of their investigation. Eventually, the three member committee submitted its 17 page report.

However, a dangerous trend being witnessed in Bihar is that the right to write the truth has been lost in the State. This is not only a violation of the rights that are guaranteed under the Constitution of India, but also poses a threat to free and fair journalism, resulting in an unsavoury situation in the state. Due to government pressure over the media, the news relating to even small agitations are being blacked out in the state like Bihar, which otherwise is known for raising matters of public concern. News relating to agitations, public concern do not find place in the newspapers, for they dare to raise uncomfortable questions for the government because they point fingers on the weaknesses and faults of the governance. 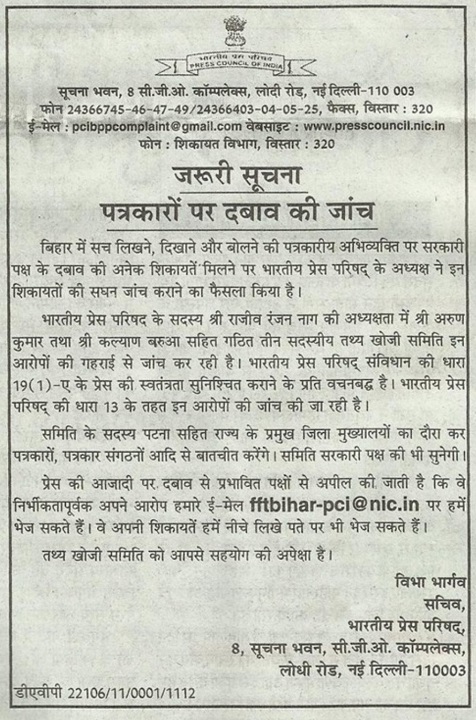 In its concluding remarks the PCI report compared the state’s situation with the emergency period:

Free and fair journalism in Bihar is facing a situation of censorship the likes of which was during the emergency in our country. The journalism of Bihar has long been known in the country for its courageous writings and of journalists putting even their lives at stake, are now gagged, muted and handicapped. Journalists, by and large, felt suffocated with many of them pleading their helplessness.

The report pointed out that the ‘Advertisement Policy – 2008’ is the instrument through which media was controlled in Bihar. It said

The visiting PCI Fact Finding Team Bihar after conducting a detailed inquiry is now of the opinion that an appropriate atmosphere for the functioning of an ethical journalism working as a real “watchdog of the society” seems to be absent in Bihar. Under such an ad market situation, as presently prevailing in Bihar the newspaper managements have been found to be more than willing to surrender all the norms and ethics of journalism. All this is to achieve what is called in managerial terms “ad revenue targets”. But this ad-revenue target is being achieved – at the cost of the healthy development and well-being of the society, of democratic values and more so of the established norms and principles of the ethical journalism.”

The Fact Finding Team also finds mention of the term “interest of the state or work” in the Bihar Advertisement Policy-2008 which is pregnant with meanings. It could be interpreted in many ways by the government officials to harass those media houses, who dare go critical of the state government.

If we go through the details of the data regarding the practice of the government giving advertisements to the media, then we can easily understand the gravity of the situation. According to information received under RTI (Right to Information) application, 498 crore have been spent in advertisement to newspapers and electronic media only in between the period of 2014 to 2019. In the year 2014-15, the government spent 83 crore on media advertising, which increased to 133 crore in 2018-19.

Nitish Kumar banned cartoons during the Durga Puja in 2013

As complete control over print and electronic media has been attained, social media platforms, which have emerged as the space where people could express their opinion against the government, are now being targeted.

“Since the JD (U)-BJP government headed by Nitish Kumar is facing a crisis of legitimacy, it is very intolerant towards any kind criticism Nitish Kumar has always implemented the neoliberal model of development. The human cost of this model is very high. Therefore, the attention of the people should not go towards it. The curb on the media was a natural result of applying this model. The recent order about the social media gag should be seen in this perspective.”