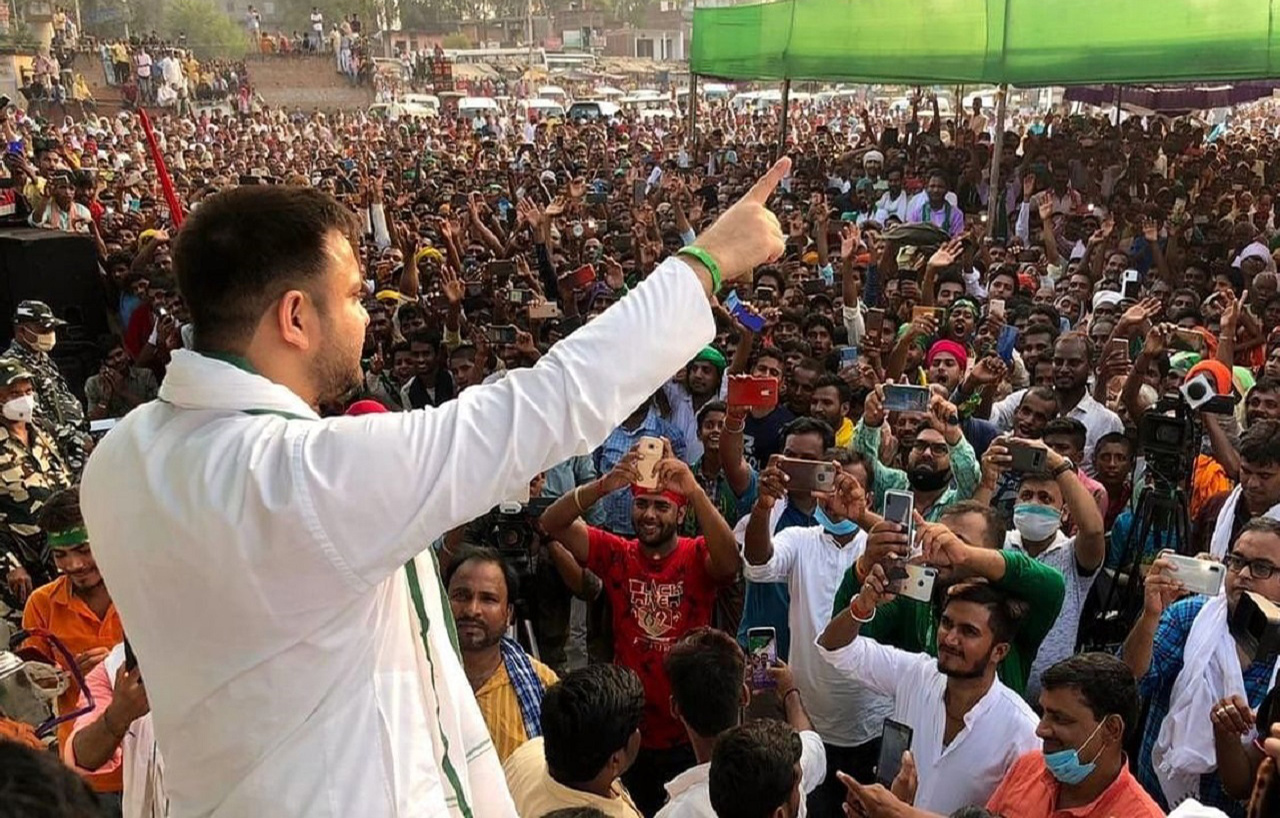 BJP’s attempt to impose its narrative of nationalism and communal polarization seems to be not working in this election in Bihar. The people, reeling under the impact of the pandemic and the lockdown, want to hear about the real issues affecting their lives. The manifestos of the contending political formations has gained more importance among the people than the divisive communal and casteist rhetoric, writes Anish Ankur from Patna.

Never in the recent electoral history of Bihar had manifestos of political parties gained such an important place. Manifestos released by political parties during the assembly election campaign have become a talking point among the voters in Bihar. Manifestos of both the main contending political formations — National Democratic Alliance (NDA) and Grand Alliance (GA) — released just some days ago are trying to compete and outsmart their contenders, particularly on the most sensitive issue of unemployment and jobs. Earlier manifestos were considered to be just a piece of paper, which nobody took seriously. It used to be released formally before election and after that was forgotten and thrown into the dustbin. But for the first time election manifestos are being taken seriously.

These manifestos have increased the political temperature of Bihar. The manifesto of Rashtriya Janata Dal (RJD) which promised one million jobs for the youth and unemployed have created a political storm in the elections. To counter and belittle this promise NDA leaders like Nitish Kumar mocked RJD leader Tejaswi Yadav. In an election rally Nitish Kumar asked “From where will the money come from for so many jobs? Will it come from jail (oblique reference to incarcerated RJD leader Lalu Prasad)”? Deputy Chief Minister and BJP leader Sushil Kumar Modi termed it as an impractical promise that cannot be implemented. He also said that to provide one million jobs in the state it will require 58,000 crore rupee, and he too asked from where will this huge money come from. All the BJP leaders criticised the RJD for the one million job promise calling it a fantasy.

But when BJP released its manifesto it promised not one million but 1.9 million jobs for the Bihari youths, who are facing a double whammy of pandemic, reverse migration as well as economic slowdown. The promise of 19 lakh new jobs is seen as a counter move to stem the growing popularity of Grand Alliance leader Tejasvi Yadav.

Prime Minister Narendra Modi has begun the Bihar election campaign from Sasaram. He will address twelve election rallies during the three phase assembly elections on 28 October, 3 November and 7 November. The politics of ‘promise and package’ were started by Narendra Modi himself during the last assembly elections in 2015, when he announced a one lakh crore package for Bihar in a dramatic and pompous way. According to social activist Jaiprakash “That promise of Narendra Modi was meant to attract voters but it failed miserably as his party lost the election and the one lakh crore package became a laughing stock among the Biharis as it was primarily meant to hoodwink the Bihari people. People are now asking where has that one lakh crore rupee gone?”

The BJP’s Bihar election manifesto kicked up a storm, when it promised to provide a vaccine for the Covid-19, when it will become available, free of cost to the people of the state, if BJP is re-elected. The manifesto, released by Union finance minister Nirmla Sitaraman, said “The NDA government in Bihar has set an example before the country in the fight against Corona. It’s our resolve that once the vaccine against the coronavirus has been cleared by the ICMR, we will make it available to the people of Bihar free of cost.” This promise triggered a flood of criticism from opposition parties as well as common people. As Mahesh Prasad, a life insurance agent, termed it “An attempt to bribe the people of Bihar.” He further asked in a humorous way “When the vaccine is not yet prepared then how promise can be given to common people?”

This year almost every political party prepared their manifesto after much deliberations with activists, academicians etc. As chairman of Congress manifesto committee, Anand Madhav said “We have not prepared this manifesto in a closed door drawing room but our research team have, from the last one year ago since parliamentary elections, conducted about 16 peoples conventions and interacted with different class, communities, civil society organisations, experts and activists. During the pandemic we maintained our communication through virtual medium and social media.” RJD this time prior to release of the manifesto have done extensive exercise. They even sought the advice of alliance partners particularly the left parties. As CPI (M) leader Arun Mishra said “Prior to the release of the manifesto they sought our input and advice.”

The manifestos of left parties like CPI, CPI (M) and CPI (ML) are known for their seriousness and people’s demands they raised. But, earlier, nobody used to pay attention to them. These parties not only made promises but also provided alternative methods to achieve that.

Agrarian crisis and health issue in the manifestos

All the parties this time have tried to address the problems of pandemic, migration, unemployment and most of all the agrarian crisis. Concern about farmers distress, health conditions and unemployment questions have been shown by almost every party, even bigger parties like BJP and Congress. Most of the solutions to agrarian crisis in the manifestos have been limited to cosmetic changes within the neoliberal economic policy framework. Barring NDA most of the political parties are critical of three agrarian bills recently passed by the BJP in the Parliament. The farm bills are silent on the MSP system and the farmers’ organisations all over the country are opposing those bills as pro-corporate, anti-farmer steps. The BJP in its manifesto has promised MSP (Minimum Support Price) not only for rice and wheat but for oilseeds also. BJP manifesto advocates bigger role for private sector while JD(U)’s manifesto talk about another ‘Saat Nishchaya’ (Seven Resolve) like toilet construction, as well as, incubation centre, free wi-fi in colleges and universities, student loan credit scheme, Nal-Jal Yojana (Tap and water scheme), skill development etc. Left parties have demanded implementation of the recommendations of D. Bandyopadhyay Committee on land reforms and strict control on the oppressive activities of microfinance companies.

Why this time political parties are giving so much importance to manifestos? Social-political analyst Anil Kumar Rai said “No doubt political parties tried to address the livelihood issues. They have realised that unless the core and concrete peoples issues are raised no empty talk and promise is going to work in the election. People are fed up with the promises. BJP, just like in 2015, tried to polarise voters on communal lines but in vain. The Corona crisis has been the big eye opener for the common masses. They have suffered a lot. A lot of people died for want of health facilities, from hunger and deprivation. They are no longer prepared to be hoodwinked by old leaders and parties. They want something substantial. Therefore political parties have shown a little seriousness at least in their manifesto.”

The attention political manifestos are getting among people as well media is a pointer of this new reality that people are demanding accountability from their representatives. They are expecting something new from them. As Gajendrakant Sharma, an activist of teachers’ movement commented “These manifestos will be a weapon for the masses to hold their representatives responsible. The way manifestos are getting media as well as people’s attention is a pointer of this simple fact that people are no longer prepared to be ruled by old and traditional methods of only caste and community loyalties.”