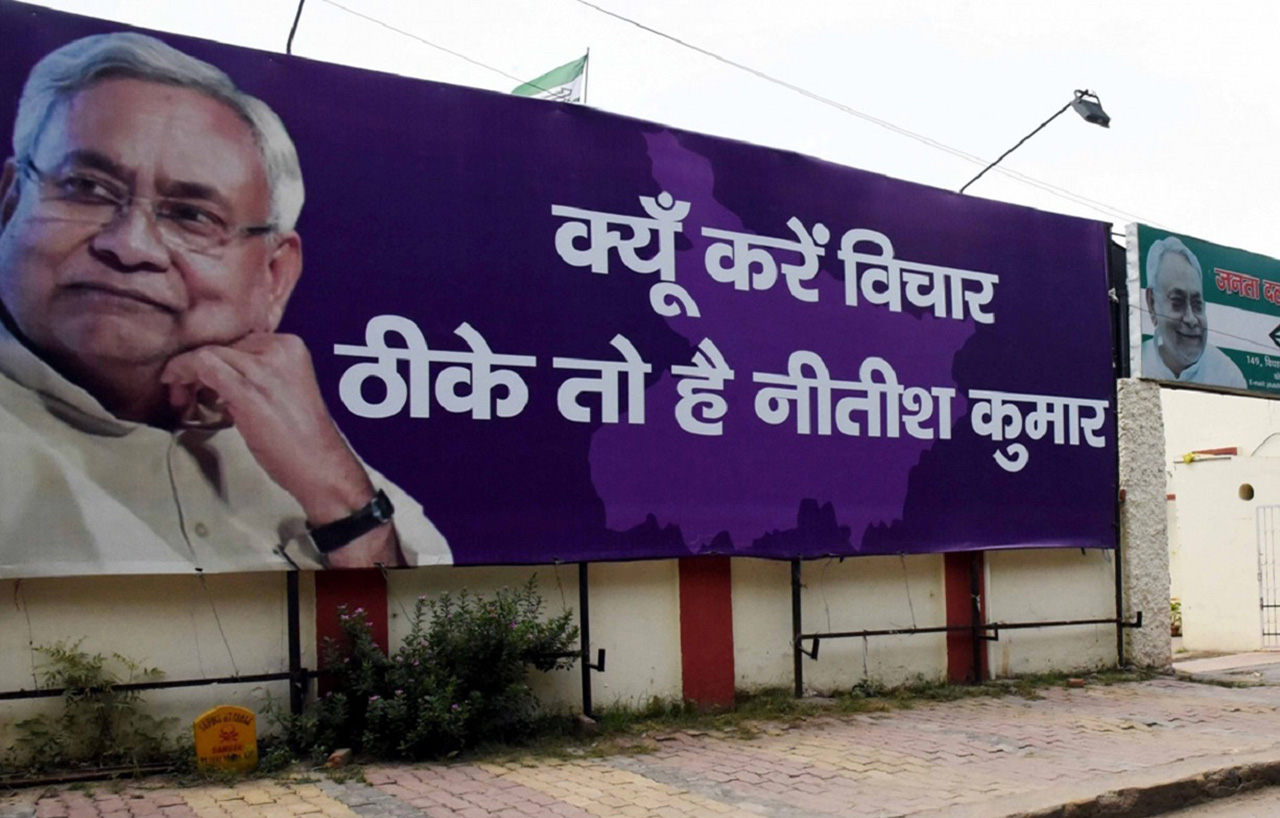 Bihar is the only Hindi speaking state of India where the BJP has never been able to win an election on its own strength. In the upcoming assembly election, BJP’s main enemy is not outside the NDA alliance but within the alliance. In BJP view without Lalu Prasad, Grand Alliance is not a big challenge therefore it has turned attention towards Nitish Kumar. They have found in the upcoming assembly election an opportune moment to marginalise Nitish Kumar in Bihar politics. The LJP’s move to leave the NDA and put up candidates against JD(U) seems to be part of a well planned out strategy by the BJP, writes Anish Ankur from Patna.

After the Election Commission (EC) announced a three-phase schedule from 28 October for the Bihar assembly polls, the first major election in India after the outbreak of the Covid pandemic, political parties are busy trying to form electoral alliances. Apart from two principal alliances in Bihar — the National Democratic Alliance (NDA) and the Grand Alliance (GA) — other alliances are in the process of being formed. Both the NDA and the Mahagathbandhan (GA) after intense negotiation and bargaining have reached and announced a final seat sharing arrangement. It seems, however, that there is considerable infighting in both the contending alliances. Before the two major alliances come face to face with each other, they are busy settling scores within the alliance itself.

Bihar’s election scenario has become very interesting. There is a lot of tension within the NDA, as both the Nitish Kumar-led JD(U) and the BJP are busy manoeuvring in an attempt to outsmart each other. The BJP’s main challenge, it seems, is not the Tejaswi Yadav led Grand Alliance but its own alliance partner, Nitish Kumar’s JD(U). BJP is using the Chirag Paswan led Lok Janshakti Party (LJP) to cut Nitish Kumar down to size. In much the same way, in the Grand Alliance, Tejaswi Yadav, the Rashtriya Janata Dal (RJD) leader is busy settling scores with Kanhaiya Kumar of the CPI. Both alliances have found themselves in crisis even before they were able to take proper shape. Those smaller parties who could not find space in two major political alliances are forming other different alliances altogether. Almost every party is facing the ire of its grassroot-level leaders and activists.

If we go by the electoral alliance of the last parliamentary elections, we find that the Grand Alliance has lost many of its alliance partners. Initially GA consisted of: the RJD led by Tejaswi Yadav, former deputy chief minister of Bihar; the Rashtriya Lok Samta Party (RSLP) led by Upendra Kushwaha, former central minister; the Hindustani Awam Morcha (HAM) led by Jitan Ram Manjhi, former chief minister; the Vikassheel Insaan Party (VIP) led by Mukesh Sahni, known as ‘Son of Mallah’ (Son of Fisherman); and the Indian National Congress (INC). But now, some of the alliance partners have departed from the GA: HAM and VIP crossed over to the NDA, while RSLP formed an alliance with the support of Mayavati-led BSP and Asaduddin Owaisi’s AIMIM. BSP have little presence in those districts bordering UP while AIMIM glowing influence is in Seemanchal districts like Kishanganj, Araria etc. with sizeable minority population. AIMIM has also a single MLA in the current Bihar assembly. AIMIM presence can adversely affect the Grand Alliance prospects in this area.

Other electoral formations are the Pappu Yadav-led People’s Democratic Alliance (PDA) which got the support of new Dalit leader of UP Chandrashekhar Ravan and Prakash Ambedkar of Maharashtra, and the Bhartiya Sablog Party led by former union minister and BJP leader Yashwant Sinha and ex-MP and former RSLP leader Arun Kumar.

The loss of the smaller parties by GA has been compensated by the induction of two left parties i.e. the CPI, and the CPI(M). The CPI(ML) was already in the alliance in the last parliamentary elections with the RJD. Seat sharing arrangements for 243 assembly seat elections have been finalised within the GA, in which the RJD will be fighting 144 seats and Congress have been allotted 71. The left parties have comparably fewer: CPI (6), CPI(M) (4), and CPI(ML) (19) seats.

The CPI have for long been considered the biggest left party of Bihar but in the upcoming 2020 assembly elections they managed to get only one-third of the seats alloted to CPI(ML). The CPI(ML) got more seats than the two other national left parties combined. The CPI(ML)’s hard bargaining tactics also helped in getting the desired number of seats. Political observers opine that the reason for Tejaswi Yadav’s generosity towards the CPI(ML) is his personality clash with CPI leader Kanhaiya Kumar. As poll watcher and lawyer Madan Prasad Singh pointed out:

“Tejaswi Yadav-led GA’s main political purpose is to defeat BJP in Bihar but the paradox is the prominent anti-BJP face nationally Kanhaiya Kumar have been deliberately kept out in electoral negotiations and his party CPI is almost humiliated after ticket distribution. It seems Tejaswi’s main concern is not to defeat BJP but to prevent the rise of Kanhaiya. “

Meanwhile, the NDA worked hard to keep their flock together. The NDA is composed of three major parties: JD(U), BJP, and LJP. In the last parliamentary elections these three parties together bagged 39 out of 40 seats. In the upcoming assembly elections, initially the LJP was demanding to contest from 42 seats but when JD(U) and BJP showed a lack of willingness to concede to this demand, the LJP, in a dramatic move, announced its decision to leave the allaince and declared that it would contest those seats where JD(U) is fighting and support BJP in other seats. The seat sharing arrangement between the JD(U) and the BJP is 122 and 121 respectively. From JD(U)’s quota, Jitan Ram Manjhi-led HAM was allotted 4 seats while the VIP bagged 7 seats from the BJP’s quota.

It has now become clear that the LJP’s decision to contest on JD(U)’s seats was prompted by the BJP, although the BJP denies it. According to social activist Gopal Sharma:

“BJP is playing [a] double game in the NDA. On the one hand it is in an alliance with JD(U) while on the other supporting LJP in its move to counter Nitish Kumar. This means BJP will be fighting on all the 243 assembly seats in which it will fight 121 seats on its own symbol and rest of the seats will be contested on LJP ticket. LJP is just an outer mask of BJP.”

This understanding is confirmed by the fact that a lot of BJP leaders are fighting elections as LJP candidates. Former RSS leader Rajendra Prasad, ex-BJP MLA Usha Vidyarthi, and several others are also in the fray as LJP nominees.

The relationship between JD(U), BJP, and LJP can be understood from the popular LJP slogan: ‘Modi Tujhse Bair Nahin, Nitish Teri Khair Nahin’ (We don’t have enmity with Modi, but Nitish will not be spared.)

Bihar is the only Hindi speaking state of India where the BJP has never been able to win an election on its own strength. Riding on Narendra Modi’s popularity, the party tried hard to test it’s strength in 2015 but it failed to challenge the formidable alliance of Lalu Prasad, Nitish Kumar and Congress. In 2020, however, Lalu Prasad is behind bars and Nitish Kumar is under immense pressure from the BJP-LJP combine. Although Nitish Kumar-led JD(U) is formally a part of the NDA, it seems as if BJP’s top priority is to finish off Nitish Kumar rather than fighting the RJD-led Grand Alliance. BJP has crafted a new model in Bihar assembly election where, as political commentator Vinit Rai put it:

“BJP’s main enemy is not outside [the] alliance but within the alliance. In BJP view without Lalu Prasad, Grand Alliance is not a big challenge therefore it turns it’s attention towards Nitish Kumar. They have found an opportune moment to marginalise Nitish Kumar in Bihar politics.”

Bihar assembly election will be held on October 28, November 3 and November 7. Will everything go according to the well-crafted BJP script? No doubt the BJP have played a very smart political move but whether it will work or not, only time will tell.

This is the first election that is being fought since the Covid-19 pandemic outbreak. Elaborate arrangements have been made, and sanitisation and social-distancing protocols have been put in place for one of the biggest electoral exercises in the world amid a pandemic. The Election Commission said that arrangements have been made for 7 lakh sanitizers, 46 lakh masks, 6 lakh PPE kits, 6 lakh units of face shields and 23 lakh units of hand gloves. The number of voters per booth has been reduced from 1,500 to 1,000.

In 2015, Bihar recorded a high voter turnout of 58%. This time around the challenge is immense owing to the ongoing pandemic and also the fact that 18 districts have been hit by floods.