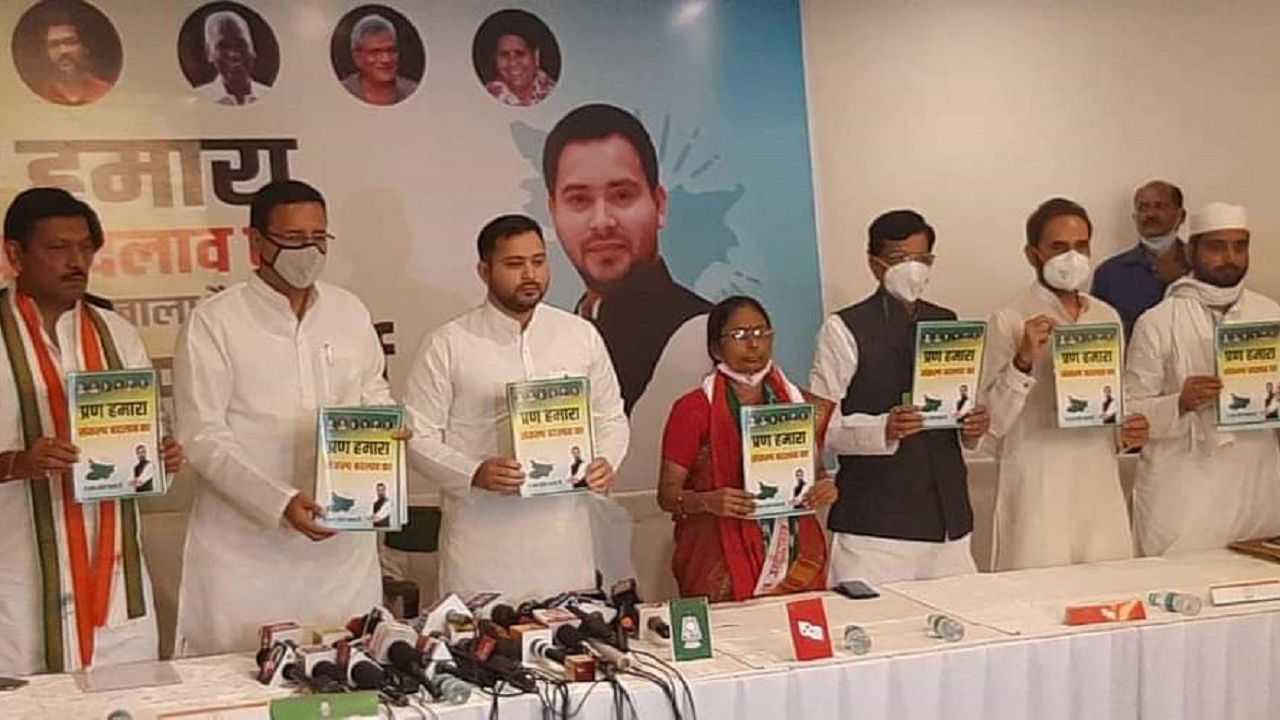 Will the RJD-Left Alliance Succeed Again in Bihar?

The internal strife within the National Democratic Alliance (NDA) is still continuing despite efforts by the BJP leadership to dispel the confusion about the Lok Janshakti Party (LJP). There is, meanwhile, a gradual realisation in NDA camp that the well-crafted move to undermine Nitish Kumar electorally may bounce back and extract heavy political cost from the NDA. In the eyes of the public, at this juncture, the NDA is looking more unstable than the Mahagathbandhan, an alliance of RJD, the Congress, and Left parties. Therefore, NDA leadership is desperately trying to keep their house in order, recognising that a failure to do so will cause heavy political damage, writes Anish Ankur from Patna.

Initially poll analysts predicted an easy victory for NDA because the caste arithmetic was in their favour. Moreover, their landslide victory in the parliamentary elections just a year and a half ago served as a morale booster for NDA. But as the political campaign is progressing things are looking very difficult for the NDA. The way Mahagathbandhan leaders like Tejawavi Yadav (RJD), Dipankar Bhattacharya (CPI-ML) and Kanhaiya Kumar (CPI) are getting enthusiastic response from the ordinary masses – their rallies are bigger crowd pullers than those of the NDA leaders – has upset their political calculation.

The alliance between RJD, Congress, and Left parties is better coordinated. At the ground level also the political activists of these three parties are cooperating with each other. There is another debate going on in Bihar: if the electoral experience of the last three decades are taken into account then whenever RJD and Left parties have joined hands they never had lost election in Bihar. Hence a question everyone is asking is will the past success be repeated in Bihar again? Some political pundits have started predicting that Mahagathbandhan or Grand Alliance (GA) is surely going to perform better.

Left parties have had a very good presence in Bihar politics since 1967 when the CPI was part of the first non-Congress government of Bihar. In 1972 CPI was the main opposition party of Bihar but after the 1974 movement the influence of CPI started to wane. In the 1980s CPI (ML) Liberation was also trying to get a foothold in the electoral arena of Bihar under the banner of the IPF (Indian People’s Front).

In 1990 Lalu Prasad became chief minister of Bihar with the help of Left parties, particularly CPI and CPI (M). In fact, the Lalu Prasad government was dependent on the left parties for its survival. In 1991 parliamentary elections this combination grabbed 48 parliamentary seats out of 54 seats of united Bihar. In the 1995 assembly election, the Lalu Prasad-led Janta Dal (JD) won a landslide victory in Bihar with the support of CPI and CPI (M). The same success was repeated in the 1996 parliamentary elections when the United Front government led by H.D.Deve Gowda was formed in which Left parties and JD were part of the front. In 1997 Lalu Prasad broke away from JD and formed his new party Rashtriya Janta Dal (RJD) after his name figured in fodder scam. In the 1998 parliamentary elections Lalu Prasad-led RJD and Left parties fought separately and it inflicted a heavy cost on both of them and the BJP formed a government at the centre under the leadership of Atal Bihari Vajpayee. Same result was repeated in 1999 when the two parties were in the fray separately. The same trend continued in the 2000 assembly elections and Lalu Prasad-led RJD strength reduced in the assembly considerably. Nitish Kumar became chief minister of Bihar for seven days. Lalu Prasad managed to survive somehow.

“Even so, it won 74 of its 124 seats in this region. In central Bihar the RJD increased its vote share by nearly 6 percentage points but lost seven seats. This is largely because it did not have an electoral understanding with the CPI.”

The setback was the same for the Left parties too. As Sanjay Kumar added

“The results are a setback for the Left parties as well. Taken together, the CPI, the CPI(M), the Communist Party of India (Marxist- Leninist) and Marxist Coordination Committee won 40 seats in 1995, this time their collective strength tally fell to 13. Both CPI and the CPI (M) faced an overall decline. After a long time, the CPI contested without a mainstream party as its ally and fared badly: it won only five seats. Down by 21 seats since 1995 and lost its position as the dominant left party in the state. The CPI(ML), which contested fewer seats than CPI, won six seats, one more than the CPI.”

But 2004 parliamentary elections were fought in alliance with Left parties, and the combination fared very well: Lalu Prasad became the Union Railway Minister. But again in the 2005 assembly elections the coordination between RJD and Left parties was not good and it led to an ouster of the RJD from power after a gap of 15 years.

The politics of social justice and secularism after 1990 never succeeded without the active support of Left parties. Now, in 2020 assembly elections, after a gap of another 15 years, the old alliance of RJD and Left, has been formed again. This time all the Left parties CPI, CPI (M) and CPI (ML) have joined hands with the RJD and Congress. It never happened before because in the last parliamentary elections of the 2019 the CPI (ML) was part of RJD-Congress alliance when it fought the Ara parliamentary constituency but CPI and CPI (M) fought separately because Tejaswi Yadav-led RJD refused to support the candidature of CPI leader and former JNUSU president Kanhaiya Kumar from Begusrai parliamentary seat.

Left parties influence can be seen not only on the election manifesto of RJD but its election campaign also. For the first time in the state election campaign RJD, a party whose name was associated with social justice and secularism, is giving primary focus on economic issues like employment considered to be the plank of Left parties. Unemployment has become almost the central issue of Bihar’s election. The promise of 10 lakh jobs for the unemployed youth by RJD leader Tejaswi Yadav has caught the attention of youths and it put NDA leaders on the back foot.

NDA leaders like Nitish Kumar and BJP leader Sushil Kumar Modi are trying to dismiss it as an impractical promise made just to score political points and it cannot be implemented. To counter this promise they are challenging Tejaswi Yadav, asking how he plans to fulfil this promise? Upset by the raising of real issues, BJP leaders have started to play their tried and tested tactics of communal polarisation. State home minister Nityanand Rai statement “If Mahagathbandhan, won in Bihar assembly elections then it will be a heaven place for terrorists of Kashmir.” Left parties, together, are fighting just 29 seats together but are facing the ire of BJP leaders. BJP national president J.P. Nadda said in an election rally that “ Leftwing extremism (LWE) will increase in the state if the Grand Alliance returned to power.” In the same way, BJP Bihar affairs in charge Bhupendra Yadav attacked RJD for giving space to left:

“The Rashtriya Janata Dal (RJD) has given space to left parties like the Communist Party of India (Marxist- Leninist) Liberation in the Mahagathbandhan. If their government comes in power, LWE activities will increase in Bihar and the phase of 1990 to 2005 when massacres frequently occurred will return.”

Left leaders Kanhaiya Kumar and Dipankar Bhattacharya are moving across Bihar and everywhere people are thronging to hear them. Their speeches on social media are getting a large number of views. In the mainstream media too, Left campaigns have started getting space.

There is a lot of enthusiasm among the social base of RJD and Left. According to Patna district secretary of CPI(M) Manoj Chandrvanshi

“RJD [is] no doubt a major political force in Bihar but it lacks the ideological basis around which its own mass base can be mobilised. Its old caste equations have become almost redundant and didn’t work in the last two and three elections. RJD understood it and now it turned towards the left not only for political alliance but also in its manifesto and campaign. The way Tejaswi Yadav is raising the issue of employment is a pointer of this simple fact that RJD cannot gain its lost legitimacy without the help of Left parties.”

The attention Left parties are getting is due to the relentless struggle they have waged in the last 5-6 years against the anti-people policies of NDA government in the state as well as centre. Left moral force and its ideological basis have provided the necessary cementing force for the Grand Alliance. Therefore at this juncture it looks more cohesive than NDA at the ground level.

In this scenario everyone is curious to know whether RJD and Left combine can repeat its own success story again? Only time will answer this question.

Changing Dalit politics in the electoral landscape of Bihar