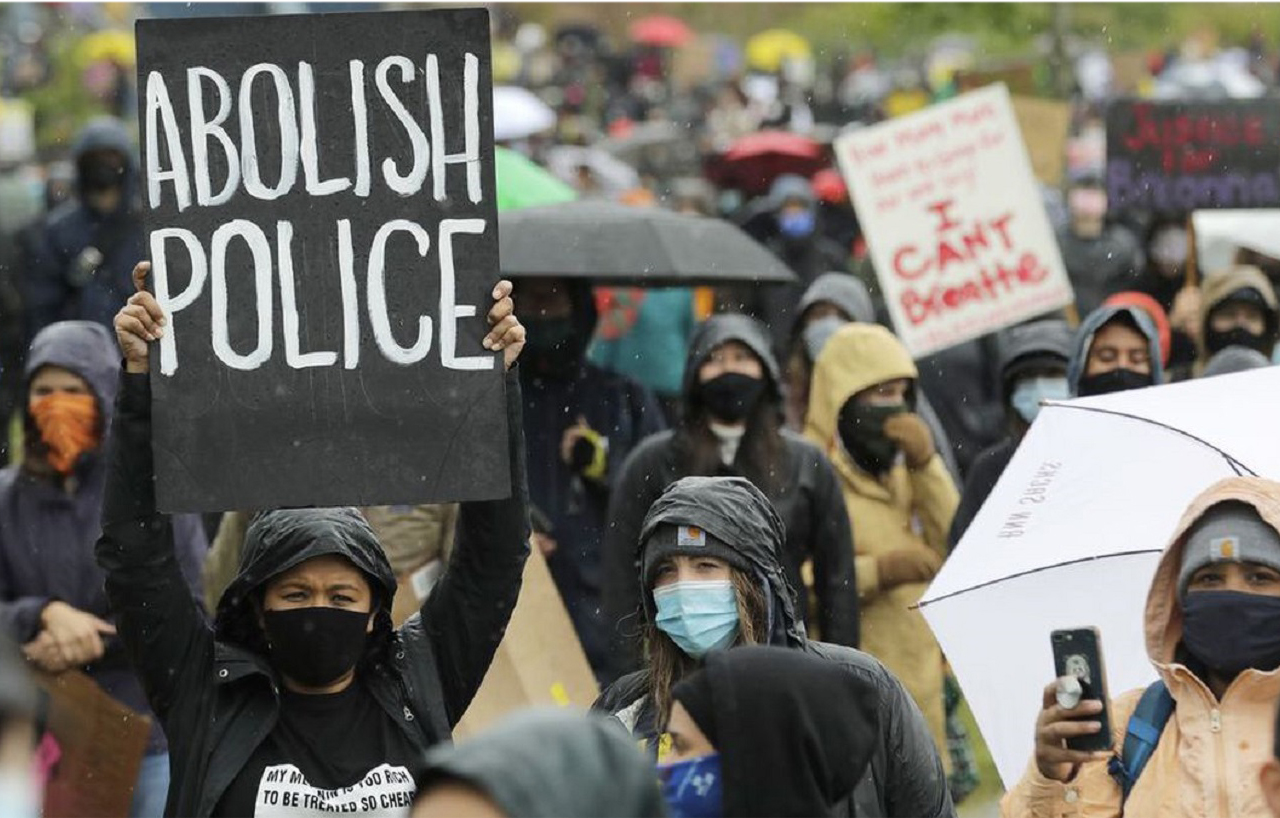 The Democracy of the 8 Billion

The millions of Americans in the streets are not just demanding an end to the carceral state, they are demanding that the state serve ordinary citizens instead of plutocrats — a demand which will resonate throughout the entire world. The age of the plutocrats is over, and the fight for transnational democracy has begun writes, Dennis Redmond.

Yet over the past two weeks, tens of millions of Americans have marched in every city, town and hamlet to protest against violent and racist policing. Communities and neighborhoods which have never witnessed mass protests in their modern history have been inundated with crowds, chants and protest signs.

Like all world-shaking protest movements,[1] the American uprising of 2020 had a short-term trigger as well as a long-term cause.

Its immediate trigger was the horrifying eight-minute murder of George Floyd by four Minneapolis police officers, who strangled a human being to death in broad daylight in the city of Minneapolis, the capital of the northern state of Minnesota — with the full knowledge that they were being recorded. This was a 21st century lynching which could not be explained away as the legacy of Jim Crow or the racism of the southern states who were members of the Confederacy back in the 1860s.

The long-term cause of the uprising was the decades-long looting of the American economy by the plutocrats, who have utterly destroyed the American middle class.

Floyd’s murder was the final straw for Americans reeling from decades of falling wages, rising debts, and plutocratic looting, and then hammered by the national government’s criminally incompetent handling of the COVID19 crisis and ensuing thirty percent unemployment. Americans masked up, carefully following all the necessary anti-virus protocols, and went out into the streets.

In response, local states called out the national guard, state governors and mayors proclaimed curfews, and police forces went on what can only be called a nationwide police riot. The police committed thousands of assaults on nonviolent protesters, unleashed chemical weapons such as tear gas and pepper spray on peaceful demonstrators, and blinded journalists with rubber bullets. As of June 12, the US Press Freedom Tracker counted 405 attacks by police on reporters.

This wave of police brutality had exactly the same effect on the protests as pouring kerosene on a raging bonfire. Journalists became even more determined to cover the protests, while ordinary citizens were furious. Each police beating, assault, and act of violence was recorded on thousands of smartphones and instantly uploaded online, triggering fresh waves of protesters.

By early June, the movement had spread to every hamlet, town, city and state in all fifty American states, while solidarity marches began to take place all across the planet. As of June 12, protests have occurred in 3,145 towns and cities around the world. In America proper, the protests were not just ubiquitous, they were universally popular. The Washington Post conducted a poll on June 9 and discovered that a mind-boggling 74% of Americans supported the protests.

Within the span of a single month, the Black Lives Matter protest movement created in 2015 went from the fringes of the political landscape to the conventional wisdom of three-quarters of American citizens.

Major corporations, sports industries, and media firms have rushed to announce their condemnation of all forms of racism and their support for Black Lives Matter. The tidal wave of change has been so vast that arch-conservative Republican Senator Mitt Romney announced his support for the Black Lives Matters movement and marched in a protest march, while the auto racing league NASCAR banned the display of the Confederate flag — one of the oldest symbols of white supremacy in America — at its events.

To appreciate the world-historical significance of this moment, it is worth pausing for a moment to consider the history of the 231-year-old struggle by African Americans against US white supremacy and for American democracy. This struggle took place in three major cycles.

The first cycle occurred between 1789 and 1860, when white supremacy took the form of chattel slavery of African Americans and the denial of the civil rights of women, poor Americans, indigenous Americans, and Irish and non-Protestant white immigrants. In response, Americans organized abolitionist and suffrage movements, built the Underground Railroad to smuggle slaves to freedom, and fought the 1860-1865 Civil War to abolish slavery.

The next cycle of struggle took place between 1865 and 1970, when white supremacy took the form of formal and informal racial segregation, the denial of the right to vote by African Americans in numerous southern states, and tens of thousands of lynchings of African Americans by white mobs and terrorist groups such as the KKK. This struggle culminated in the mass mobilizations of the New Deal and civil rights movement, the Great Society welfare reforms of 1933-1966, and the national uprising of the Black Panthers during 1968-1970 .

Between 1970 and the present, a third cycle has been taking place. This is the struggle against the mass incarceration of nonwhite communities and the poor. Countless sociological studies have shown that African Americans do not commit more crimes or use more illegal drugs on average than white, Latinx or Asian American citizens. Yet since 1965, the US criminal justice system has targeted and arrested African Americans at much higher rates than any other social group.

In a recent article, Associated Press journalists Margie Mason and Robin McDowell observed that in the state of Minnesota, where George Floyd lived, African Americans represented just 7% of the total population but an astonishing 36% of the state’s prison population. Police officers regularly assault and mistreat ordinary African American citizens:

In the last five years, the Minneapolis Police Department has used force 11,000 times, according to a review of police data by The Associated Press. Black people accounted for 60% of those cases, even though they represent only 19% of the city’s population. Body pins were most commonly used, followed by punching, kicking and shoving.[2]

Stop and think about what that last sentence just said: “punching, kicking and shoving” is another name for physical assault.

This is in flagrant contradiction to one of the core features of citizenship in a democracy, namely the presumption of innocence. The duty of the police is not to punish the guilty, but to arrest suspects who are presumed innocent until proven guilty by a court of law. The tragic reality is that vast numbers of American police are criminals with badges, who kill the citizens they are being paid to serve and protect at three to ten times the rates of other industrialized nations.

Why has the American state been so brutal towards its own citizens? Because that state has been taken over by plutocrats.

Mass incarceration is part and parcel of the post-1973 plutocratization of American politics. For five decades, the US plutocracy have been avoiding paying taxes while gutting public healthcare, education and social services for most Americans. The result has been a disaster. American life expectancy has fallen to the level of middle-income polities, real wages have collapsed, and most Americans sink into debt peonage. Yet the plutocrats got away with this by using their loot to buy off both political parties, and by scapegoating African Americans for the horrific consequences of plutocratic rule.

America’s carceral racism is the mask of plutocratic rule — and the uprising against the former is also an epochal rebellion against the latter.

For the first time in modern American history, a majority of citizens have openly rejected the despotism of the planet’s 2,116 billionaires and are beginning to embrace a new political project. This project is what we will call the commons of the 8 billion, a.k.a. the current population of the planet.

The goal of this latter is not to build a national organization, to take political power in a specific nation, or to transform even a group of nations. Its goal is to permanently transform every single polity, great and small, across the entire earth.

The economics of this commons are those of unions, working-class political power and a global Green New Deal. Its politics are those of universal equality, ecological sustainability and egalitarian participation. Its culture is that of open source creativity, non-commercial fan communities and transnational audiences.

The 2020 American uprising marks the moment that the political commons of the 8 billion has become a motive force of world history. The millions of Americans in the streets are not just demanding an end to the carceral state, they are demanding that the state serve ordinary citizens instead of plutocrats — a demand which will resonate throughout the entire world. The age of the plutocrats is over, and the fight for transnational democracy has begun.

[1] It says something about the worldwide failure of capitalism that two of the most pro-capitalist, consumerist and politically conservative societies on the planet — Hong Kong and the United States — exploded into the biggest pro-democracy protests in their respective histories in 2019 and 2020. Even bigger protests are yet to come.

The author, Dennis Redmond, is an independent scholar of digital media, videogames and transnational media.