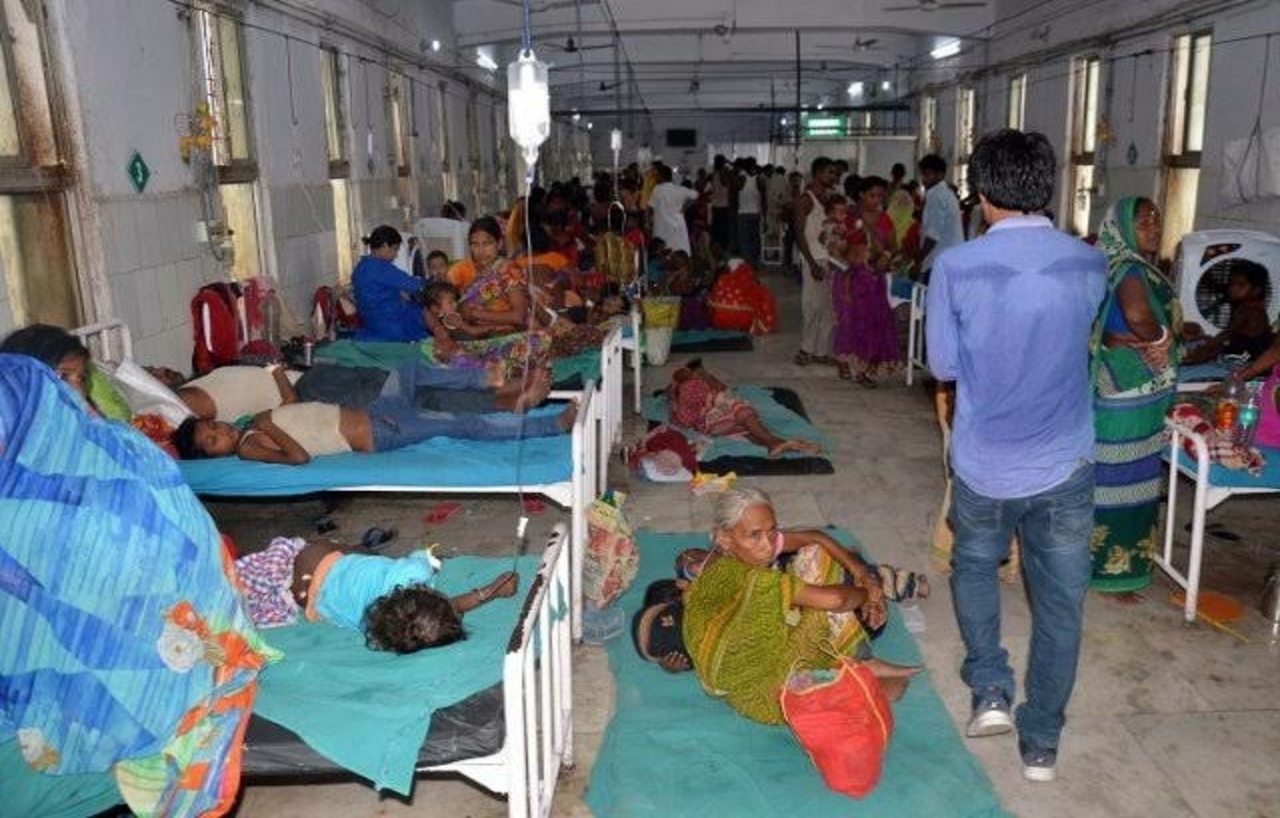 Recent news of child deaths due to AES (Acute Encephalitis Syndrome) has started coming not from epicentre Muzaffarpur, but from Gaya – another main city of Bihar. The spread of AES from north to south is a matter of serious concern for the health department, which is already under fire for failing to contain AES deaths as the disease has been recurring every year during extreme summer and causing much devastation. AES deaths have exposed the hollow claim of the Bihar Government regarding improved health situation over the years. Anish Ankur writes.

These deaths have not only raised big questions over medical facilities available at the government run nutrition programmes for children in the age group of of zero to six years, this tragedy has also brought under scanner the state government run ICDS (Integrated Child Development Scheme) under the Social Welfare Department.

While malnutrition is believed to be a key factor in the AES deaths, the budget of the ICDS programme, which has been meant for nutrition of children and pregnant women and lactating mothers, has been drastically cut down in the last four-five years from Rs 1713 crore during 2013-14 to Rs 988.7 crore during 2017-18.

Altogether, 48 percent children under five in the state have stunted growth while 44 percent children under five are underweight, as per the National Family Health Survey (2015-16) report. The ICDS was started as a rural care programme on October 2, 1975. Its intended purpose was to improve the health of children (in the age of zero to six years) pregnant women and lactating mothers, and Anganwadi Kendras were created to implement these nutrition programmes. More than 91,000 Anganwadi Kendras are functioning currently in the state, on paper.

According to All India Progressive Womens’ Organisation (AIPWA) National General Secretary Meena Tiwari, “During the outbreak of AES at Muzaffarpur some of our members who spoke to the AES victims’ parents and also to the Anganwadi employees, told us some shocking facts – that in the first quarter of the year, the Anganwadi Kendras in their areas had for months remained closed and they were not provided the ORS (Oral Rehydration Solution) packets. Some of the Anganwadi employees were engaged in election duty so the centres remained closed.”

The Sri Krishna Medical College (SKMCH) in Muzaffarpur – epicentre of the recent AES deaths – lacks some basic facilities despite five decades of its inception. The State-run hospital was built in 1970 in the name of Bihar’s first Chief Minister Dr Sri Krishna Singh. It was inaugurated by then Chief Minister Daroga Prasad Rai. The medical college does not have post graduate seats to produce doctors with specialisation in pediatrics. It does not even offer PG programmes in Gynecology and Surgery despite earlier assurances for the same.

The State Health Secretary had been asked to prepare a proposal to introduce courses of specialisation only after Chief Minister Nitish Kumar visited the hospital on 18th June.

According to recent promises made by the Government, SKMCH which at present has 610 beds will be upgraded into a hospital with 2500 beds. An addition of 900 beds will be made within one year and the rest will be done in successive years. The number of beds in pediatric ICU – which currently has fifty beds – will be increased to 100 beds. Students who have completed MBBS from SKMCH get Rs 15000 during their one year internship. Ironically, these interns have not got the amount for the last two and half months.

Union Health minister Harsh Wardhan had said that the government would increase the number of MBBS seats from 100 to 250, but nothing has happened so far. In fact, the Medical Council of India (MCI) had reduced the number of seats to 50 because of poor infrastructure. This was increased back to 100 in 2014, after the deaths.

The Indian Society of Critical Care Medicine says a hospital with 100 beds should have an ICU with a capacity to accommodate 8-12 beds. One bed should have an area of 125 – 150 square feet. But in SKMCH, all the beds are close to each other. The partition between them is much below the prescribed limit. Entry to the ICU should be limited and there should only be one gate for entry and exit. But no compliance of such guidelines is visible at SKMCH.

Government claims that situation has improved

Talking about the health delivery system, CM Nitish Kumar boasted about ‘significant improvements’ in health conditions in the state from 2006. “Earlier, about 37 persons used to visit PHCs in a month. But nowadays, the number of patients visiting PHCs had gone up to 10,000. Even immunization has risen to 88 percent which needs to cover each and every child,” he had claimed.

The State Health Minister in his reply in the Legislative Assembly to questions regarding health expenditure, claimed that “the mortality rate among children in AES cases had come down to 21 percent this year as compared to 38 percent recorded in 2013, thanks to substantial spending in health sector.”

But if we try to find out the veracity of the government claims, we find a totally different picture. According to Policies Research Studies, Bihar health budget was Rs 8,234 crore in 2016-17. But for the year 2017-18, the budget was cut short by Rs. 1000 crores and became Rs. 7,002 crore. Urban health budget was reduced by 18 percent and rural health budget by 23 percent. The million dollar question, then, is that when total budget is about Rs. 7000 crore, how can it expect to build a proposed super-speciality hospital of 1500 beds with a budget of Rs 1500 crores, and a multi-speciality hospital with 2500 beds at an estimated cost of Rs 2500 crores?

In 2018, the state cabinet had taken a decision that the Patna Medical College and Hospital would be turned into the world’s largest hospital. It, at present, has 1700 beds which would be upgrade to 5,462 beds. The government claims that this will be completed in seven years and the budget fixed for this purpose is Rs 5,540 crore. This means, this proposed upgradation will have almost the entire state’s health budget. For over 5,000 beds, the hospital would need at least 1,500 doctors. Does the government have so many doctors? The state does not have 5,000 doctors and seats in government medical colleges have not been increased for a long time. This entire scenario exposes the hollow claims and promises of the State Government.

Bihar Government is going on the same neoliberal path where the prime driver of health care in the state is the private sector. In the last one and a half decade, Patna and other major towns witnessed a mushrooming growth of private nursing homes where patients are charged with exorbitant fees. Bihar has the highest dependence on private health-care services among Indian states, the lowest government spending on health and an estimated 22 lakh households face “catastrophic” health expenditure – a new analysis of central government data has suggested. The analysis, based on the Union Statistics and Programme Implementation Ministry’s National Sample Survey Organisation (NSSO)-2016 data, says Bihar spends Rs. 348 per person on health, less than half of India’s average spending of Rs 724 per person per year.

According to National Health Accounts (NHA) estimates released this year in March, patients bear a big chunk of health expenses across the country – as high as 61 percent of the total health expenditure. The total expenses incurred on healthcare in India stood at Rs 5,28,285 crore in FY 2016, of which the household Out Of Pocket Expenditure (OOPE) on health is Rs 3,20,211 crore. On the other hand, the government’s health expenditure (GHE) stood at Rs 1,61,863 crore (30.6 percent of the total health expenditure). Patients end up spending out of their pockets on medicines, doctor’s fees, bed charges, diagnostic tests, drugs and products such as vitamin supplements at public and private hospitals and pharmacies, despite various public health schemes. In Bihar, the share of OOPE against the overall expenditure was the highest among the states, at 79.9 percent, against the national average of 60.6 percent. The centre and state governments spent Rs 4,756 crore on health in Bihar, while the state’s OOPE stood at Rs 19,890 crore [Source: National Health Accounts (NHA), FY 2016].

Bihar Government’s obsession with private health institutions can be gauged from the fact that recently a prime land has been allotted to Delhi based private health industry giant, Medanta, in the premise of Jai-Prabha blood bank in Patna. Despite protests by activists associated with the JP movement. Nitish Kumar, who claims to be a loyal disciple of JP, himself gave the ‘go ahead’ nod for Medanta. Jai-Prabha hospital had been made in the memory of the Janata movement leader Jaiprakash Narayan, and his wife Prabhavati.

Although Bihar government had passed Clinical Establishments (Registration and Regulation) Act, 2010 to regulate private nursing homes, in effect it is almost helpless in the face of a Patna High Court order restraining it from taking punitive actions against private hospitals. Several private hospitals are flouting the Act. None other than the Health Minister Mangal Pandey himself had admitted in the floor of the house that “There are many hospitals in Patna, which do not have facilities and equipment that are mandatory under Clinical Establishments Act. But their registration (Under the Act) can be done only if we are allowed to take action against them.”

In a shocking revelation about medical care facilities in Bihar, the State Government has given an affidavit in the Supreme Court stating there are only 5,205 doctors available in government run health centres, against the sanctioned strength of 12,206 posts. The State Government also told the Court that there are only 5,634 nurses, against the sanctioned number of 19,155 posts. In other words, 57 percent of doctors and 71 percent of nurses posts are lying vacant. In case of lab technicians and pharmacists, the vacancy stands at 72 percent and 58 percent of the sanctioned strength, respectively. The affidavit also said, “It is respectively submitted that the overall human resources available in health system in the state is not as per standard norms.” It said that requisition for recruitment of 4,012 general duty medical officers and 2, 425 specialists doctors has been sent to the Bihar Technical Services Selection Commission.

Such data shows the miserable state of health services in the state where the Government has abdicated its responsibilities. The poor citizens cannot afford private health facilities, so they have no other option except government health centres. The public health centres are deprived of resources and funds and no one wants to go there if other options are available.

The AES deaths have set off alarms on the situation of health in Bihar. Under pressure of public outcry, the Government seems to be taking some corrective measures, but whether these efforts will lead to any improvement in the health scenario, only time will tell.

Anish Ankur is a social and cultural activist from Bihar. You can read his earlier reports on the AES deaths here and here.