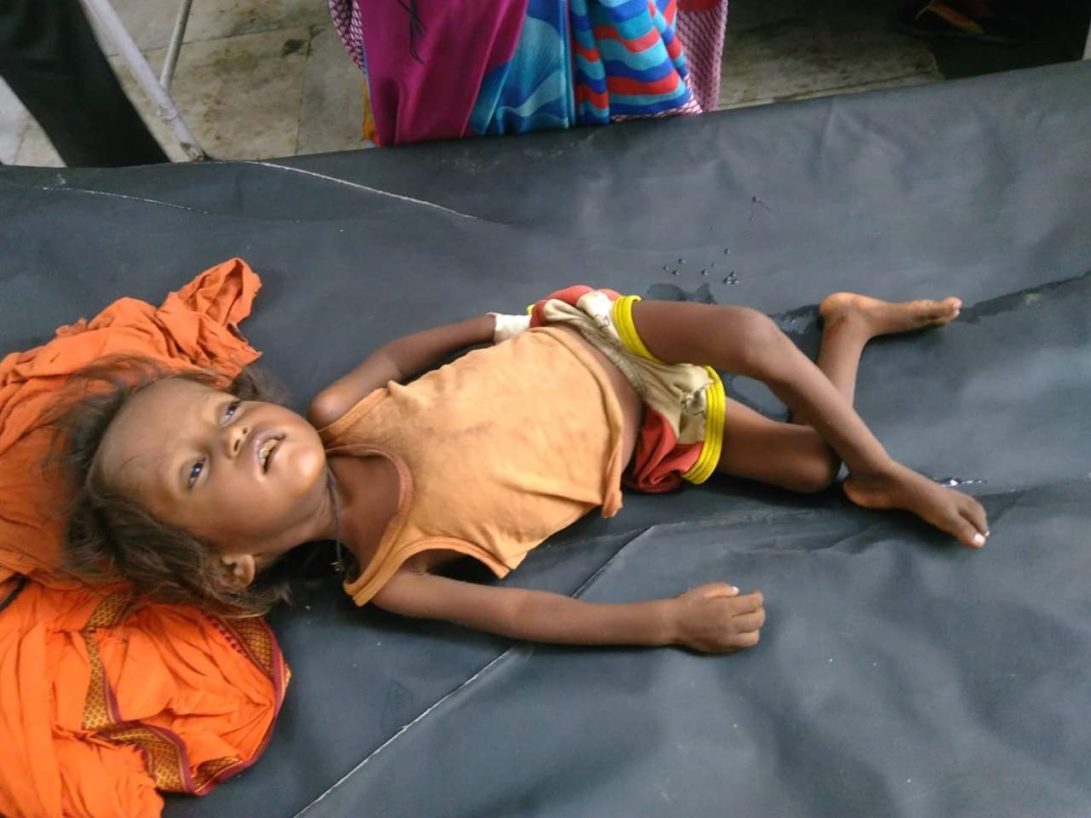 Malnourishment, Not Litchi, is the Prime Cause of Children’s Deaths in Muzaffarpur

Hundreds of children have died in Bihar’s Muzaffarpur due to Acute Encephalitis Syndrome (AES), a deadly disease that strikes the region year after year. The tragedy once more points to the dismal rural health infrastructure in the country. A report by Anish Ankur.

The day Narendra Modi was taking oath, once again, as the Prime Minister of India at New Delhi, news of children’s deaths began pouring in from Muzaffarpur’s  Sri Krishna Medical College and Hospital (SKMCH) in Bihar. Since then, more than 160 children (unofficial sources say, more than 300), had died of a mysterious disease called Acute Encephalitis Syndrome (AES), or, ‘Chamki Bukhar,’ as it is called in local dialect. AES has spread to nearly half of Bihar, covering over 20 districts. The cause of the outbreak is still unknown, and the disease has mostly affected the Maha dalit  famlies like Sahnis, Mushhars, Ravidas and Paswans. Scientific research has not been able to conclusively prove that AES is caused by some virus, bacteria or toxin in litchi. Meanwhile people have started reacting, and vented their anger when political leaders visited them to assuage their hurt sentiments.

The death of the poorest sections of the society have exposed the dismal  condition of public health infrastructure in Bihar, as well as the efficacy of the much talked about central scheme ‘Ayushman Bharata Yojna’. During recently held parliamentary elections, ‘Ayushman Bharata Yojna’ was one of the most talked about welfare scheme for downtrodden people by the pro-Modi campaigners. The Bihar government has announced ₹4 lakh as compensation to each family that has lost a child to AES. Hearing a PIL on the issue, the Supreme Court has asked for a action taken report from state as well as the central government.

Since then, more than twenty five days have passed, but children are still dying every day. Union Health Minister Dr Harshvardhan, Bihar Health Minister Mangal Pandey, Bihar Chief Minister Nitish Kumar, Deputy Chief Minister Sushil Kumar Modi, Union State Minister of Health Ashwini Chaubey have visited the hospital but nothing substantial has changed so far there in. Union Health Minister Dr Harshwardhan announced in a press conference, that a 100 bed Paediatric Intensive Care Unit (PICU) will be built very soon, but he became mum when local journalists reminded him of a similar promise he had made in 2014 when he had visited the hospital after the death of 98 children from the same AES. Such was the callous attitude of BJP leaders that Ashiwini Chaubey was caught taking a nap even during the press conference and Mangal Pandey was more interested in knowing the score of India-Pakistan World Cup match than the children’s death. Both of them were caught on camera and it soon became viral on social media. Everyone — from local MLA to MP to health minister (both at the central and the state level) belongs to the BJP, but yet nothing serious has been done to fight the epidemic.

Although a team of doctors have been sent by Delhi, and a ward meant for prisoners’ treatment has been turned into a Paediatric Intensive Care Unit (PICU), conditions are far from satisfactory. The number of doctors, nurses and other medical personnel, who are attending to the patients, are still far from enough.

Sanjay Kumar, Principal Secretary, Health said “This year will be a turning point. The bed capacity will be increased to 1,500 and we will have a virology lab to better investigate vitals of patients and determine disease causes.”

Most of the AES-afflicted children are being treated at the state run hospital (SKMCH) while some are admitted at the Kejriwal Maternity Clinic (KMC). The ailing children lie on the floor of the paediatric wards, in the corridor, near washrooms. If a child is brought in the middle of the night, the patient and their attendants have to wait because even the floor space is full of children and their family members.  Each bed is being shared by two to three patients.

More than two decades after the AES first struck in 1995 in Muzaffarpur as an epidemic, this disease still not only persists but continue to spread. Between the years 2000 to 2010, more one thousand children died of AES. There was sharp increases in 2012 and 2014, when 395 and 372 children, respectively, lost their lives. Through the years, AES cases have been reported from several districts in Bihar: Gaya, Patna, Aurangabad, Saran, East Champaran, Sitamarhi and Vaishali. Government figures show that in the peak years of 2012 and 2014 Muzaffarpur accounted for 35-40% of hospital admissions of children from AES.

To minimize children’s deaths, NGOs and government health teams are camping in Muzaffarpur. Dr Kafil Khan, who hit headlines in 2017 after Gorakhpur BRD hospital tragedy where over 60 children died of lack of oxygen supply, has also reached Muzaffarpur to assist families affected by the disease. He is holding camps to spread awareness about the disease, giving medicines and referring serious cases to hospitals. A large number of youths from Patna and other parts of the state also went to Muzaffarpur to help and spread awareness about AES among the people. They are arguing people to get their kids treated as soon as the first symptom of AES appear and due to this patient rush to SKMCH have increased. If the symptoms are not treated within first few hours after appearance, thirty percent of those affected can die. AES usually affects very young children who are severely malnourished.

Arun Kumar Mishra, a CPI(M) leader, who visited SKMCH said, “By talking to doctors, we came to know that if children inflicted with the disease reach the hospital within an hour, they can be saved and many have indeed been saved. But for the poor people, it is very difficult to bring the afflicted children within the first hour to the hospitals. They need to travel long distance as most of the nearby primary health centres in rural areas are non-functional with no doctor, no nurse, no medicine. One has to reach the district headquarter to get any treatment.”

Cause of disease and death

But what is the cause of this disease in this particular area?  According to Dr Gopal Shankar Sahni, the Head of Paediatric Department, SKMCH “Many of the children with symptoms of AES of JE (Japani Encephalitis)   notably reported convulsion, coupled with high fever, died of hypoglycaemia, a condition of low blood sugar.” Some researchers suggest, a toxin found in litchi fruit was responsible for causing the Hypoglycaemic Encephalopathy.

Arun Shah, a paediatrician and private practitioner, who has been working in the city since 1984, insists that the increase in AES cases is a result of malnourished children suffering brain damage after eating litchis, particularly unripe or overripe ones. In a research paper published in 2014, Shah and virologist T. Jacob John had pointed out that the children in Shah’s clinic in Muzaffarpur were found to have extremely low blood sugar levels and signs of brain damage. While viral or bacterial infections that cause encephalitis (an inflammation of brain cells due to an infection), were well known in Muzaffarpur and neighbouring districts, many of them became sick and died due to Encephalopathy (brain damage, in this case, due to an environmental toxin).

In 2016, a detailed investigation report, published in The Lancet Global Health by the National Centre for Disease Control, India, and the U.S. Center for Disease Control and Prevention, found “confirmation” that litchis contained a chemical called Methylene Cyclo Proyl Glycine (MCPG). These are naturally occurring toxins that cause hypoglycaemia and metabolic derangement in children.

When a child is malnourished, her body, having exhausted its reserves of glucose from the digestive tract and the liver, typically turns to fatty acids in biochemical desperation to supply blood sugar to the brain. The theory suggests that MCPG thwarts this mechanism. This can send the brain into hypoglycaemic shock triggering convulsions and, if unaddressed, can even cause death.

Arun Shah said that he has decided to embark on a scientific empirical study to conclusively prove that malnutrition is the single biggest cause of Muzaffarpur’s tragedy.

Analysis of medical data sheets of 37 children reveal that fever and seizure are overwhelmingly common symptoms. Besides, other factors responsible for making people vulnerable to this disease are lack of puckka house and toilet in the house, exposure to mosquito and impaired consciousness.

The administrator at KMC pointed out “Some 99 percent of the children admitted to KMC since the first of June, belong to families whose socio-economic conditions are very poor. Children went to sleep without dinner. This, coupled with hot and humid weather, brought their blood sugar down drastically.”

Moreover, Bihar’s position at the bottom of the National Health Indices makes novel diseases harder to detect and known diseases harder to treat. According to the National Family Health Survey (NFHS) of 2015-2016, 48% of children in Bihar were stunted, compared to the national average of 38%. Bihar also performed poorly in terms of its ability to spend and implement schemes that provided nutritious food to the children and expectant mothers. Two-thirds of eligible children did not get healthy meals, the NHFS report noted.

Instead of focusing on these serious social issues, there is an attempt to blame the litchi for the death of children. It is now a popular knowledge that the children who died, had eaten litchies. But is there any connection then between litchis and AES? Dr GS Sahni, head of the department of paediatrics at SKMCH said “My first-hand experience shows there is little connection. We have reported a one-year-old child’s death due to AES. Could he eat litchi? Most deaths are in the age group of two to three-and-a-half years, when children can hardly eat litchi on their own. “He further added, “litchi toxin can increase SGPT (a liver toxin) level abnormally, but AES patients’ SGPT levels were found marginally high. Litchis are not available after the second week of June but AES cases are reported till mid-July if there are no rains.”

Scientists at the Muzaffarpur based National Research Centre on Litchi are surprised and say  there is not enough evidence to support the litchi theory. Director of this centre, Vishal Nath says “The fact is that there is no connection between the disease and litchi, which has been here and at various other places in the state and the country for ages. People are still eating litchi in Patna, Delhi, Mumbai and many other places and they are fine. Instead of trying to pass the buck, there should be an attempt to come out with concrete medical evidence.”

During the parliamentary elections, the Prime Minister Narendra Modi, while campaigning in Muzaffarpur  had promised to airlift the ailing children to Delhi for better treatment. But now that the elections are over, PM Modi neither visited the hospital nor even condoled these unfortunate deaths. As social activist Gagendra Kant Sharma puts it “Narendra Modi knows it very clearly that he will not have to pay the political cost of his criminal apathy.”

In the upper house of the Parliament, it is not the BJP but Vinoy Vishwam  from Kerala, of Communist Party of India (CPI), who raised the issue and the Rajya Sabha stood in silence in memory of the dead children. Criticising the central and Bihar government for their lukewarm approach towards the children’s deaths in Muzaffarpur, Vinoy Vishwam said “It was a massacre, not deaths that has happened here. Sending battalions of doctors is of no use unless adequate medicines and infrastructure are there in hospitals.”  He also commented “Kids from poor families are dying, while the authorities talk about Yoga and health protection.”

Anish Ankur is a social and cultural activist from Bihar. Cover image courtesy to the author.