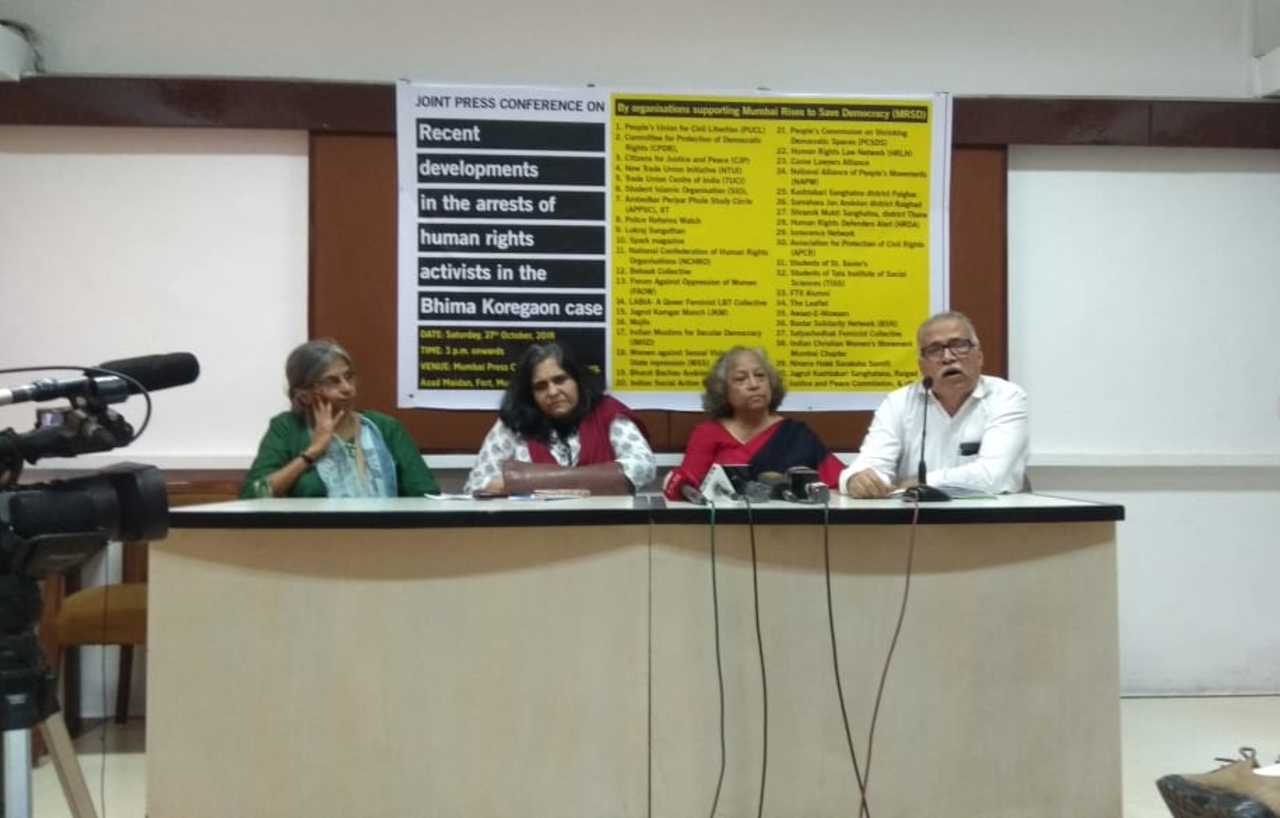 Mumbai Rises to Save Democracy (MRSD) press release condemns the continuous hounding of the human rights activists, people lawyers, trade unionists and other voices of dissent by the Indian state and use of draconian law like UAPA to imprison them for years without bail. The press statement also highlights the failure of the Maharashtra government to contain the violence unleashed by the right wing Hindutva groups. A report by GroundXero based on the press release.

The members of civil society and more than 40 organisations including women’s rights organisations, dalit rights organisations, adivasi mass organisations, legal aid and research organisations, environmental groups, trade unions, students etc., came together under the banner of Mumbai Rises to Save Democracy (MRSD), at Mumbai Press Club, to register their condemnation of the continued hounding and reprisals by the state of human rights activists arrested allegedly in the Bhima Koregaon case.

Till the very last day of the temporary relief of house arrest granted by the Supreme Court vide order dated September 28, 2018 in Romila Thapar & Ors. v. Union of India, the Sessions court in Pune rejected the bail applications for Advocate Sudha Bharadwaj, Arun Ferreira and Vernon Gonsalves, who were arrested allegedly in the Bhima Koregaon case on August 28, 2018.

Background of arrests, Romila Thapar’s petition and the court cases

After the arrests and simultaneous raids on the houses of activists Arun Ferreira, Vernon Gonsalves, Sudha Bhardwaj, Gautam Navlakha and Varvara Rao; and raids on houses of Stan Swamy, Anand Teltumbde, Kranthi Tekula, Susan Abraham, KV Kumaranath, Prof. Satyanarayana on August 28, an urgent petition was filed by five eminent personalities in the Supreme Court on the question of arbitrariness of the arrest and curbing of dissent. Justice Chandrachud, while delivering a dissenting judgement (2:1) on September 28, laid bare the entire petition and discussed various points of law rigorously, striking at the heart of the matter — the utter violation of due process as per the provisions of the CrPC and the UAPA and termed the arrest as attack on dissent. The majority judgement authored by Justice Khanwilkar and signed by the then Chief Justice Deepka Misra, in all but a few lines noted that the Pune Police is responsible and can be trusted to carry out the investigation following due process. Although the dissenting judgment grants the demand for an SIT, the majority judgement extended the house arrest of the five rights activist for four weeks allowing them to seek other remedial measures in the trail court and the Supreme Court.

A review petition on the above judgement was filed in the Supreme Court. It was listed for a chamber hearing on October 26 , which was, incidentally, the last day of the house arrest. While no order was passed on October 26, leaving much ambiguity, the review petition now stands rejected by an order passed earlier today. Similarly, the order, rejecting the bail application for Sudha Bharadwaj, Vernon Gonsalves and Arun Ferriera, was filed in the Pune session court and was delivered on the same day. Earlier Pune sessions court had adjourned the extension of house arrest of Arun Ferriera and Vernon Gonsalves, thus rejecting the grant of interim relief. As a result, this gave no time to the three activists – Sudha Bharadwaj, Arun Ferriera and Vernon Gonsalves – to seek legal recourse.

In case of Gautam Navlakha, Delhi High Court had released him from house arrest on October 1. The petition seeking the quashing of the FIR against Gautam Navlakha, Anand Teltumde and Father Stan Swamy also came up before the Bombay high Court on October 26. The Bombay high Court has granted interim relief against arrest to Navlakha and Teltumbde until Novemeber 1 and Swamy until October 31. Hyderabad High Court on October 25 extended the house arrest of Varvara Rao for three weeks, allowing him to move local court in Pune and Mumbai High Court for quashing FIR by Pune police.

This is not the first spate of attack by the State on rights activists. The first to be arrested were eight workers of Reliance Infrastructure in the month of January by the Anti Terrorist Squad (ATS) in relation to the Bhima Koregaon violence. They have been charged under various sections of the draconian Unlawful Activities (Prevention) Act (UAPA) and are yet to get bail even after months of being under custody. Incidentally, the charge-sheet filed in their case finds no mention of the Bhima Koregaon violence!

On June 6, 2018, five others were arrested —Sudhir Dhawale, the editor of the progressive Marathi magazine Vidrohi and one of the organiser of the Bhima Koregaon Shaurya Din Prerna Abhiyan; Professor Shoma Sen, the then Head of the Department of English, Nagpur University; Advocate Surendra Gadling, General Secretary, Indian Association of People’s Lawyers; Mahesh Raut, anti-displacement activist from Bharat Jan Andolan and a former fellow at the Prime Minister’s Rural Development (PMRD) and Rona Wilson, Public Relations Secretary, Committee for the Release of Political Prisoners. The planned raids and subsequent arrest of June 6 were similar to the ones in August 28.

On October 24, the Bombay High Court quashed the Pune Sessions Court order granting extension of 90 more days to the police to file the charge-sheet in the matter raising hope for a possibility of their bail. A stay was granted until November 1, to allow the police to appeal against the order. The police filed an SLP challenging the order in the Supreme Court which is fixed for hearing on Monday.

MRSD further condemned the rejection of bail plea and arrests

MRSD questioned the grounds of rejection of bail despite there being no substantial evidence against activists Arun Ferriera, Vernon Gonsalves and Sudha Bhardwaj. In a statement released at the Press Conference MRSD pointed out, “We extend our continued and whole-hearted support to the activists facing the reprisals. The manner in which the state has been hellbent on depriving the liberty of the activists, while openly violating every norm of natural justice throughout the investigation in the case, is appalling and an assault on democracy. On the other hand, there is a clear attempt to divert attention from investigation into the role of Hindutva groups in attacking the Bhima Koregaon visitors and prosecuting the real culprits (Shambhaji Bhide and Milind Ekbote), which has been pushed to the sidelines to protect the perpetrators of violence. We urge the conscientious citizens and media to highlight the lapses in the investigation and the criminalisation of these activists by the state.”

The statement further condemns the draconian law UAPA, which makes it extremely difficult to get bail and has stringent provisions, on account of which those arrested under the Act can be practically perpetually imprisoned without any trial. The has been regularly used against Muslims, dalits, adivasis, activists, lawyers, journalists etc. in order to curb dissent and spread a reign of terror.

The statement draws attention to the Bhima Koregaon Judicial commission hearings, which are going on to investigate the failures of Maharashtra government in being able to control the violence that ensued after alleged Hindutva groups attacked Dalit Bahujans at Bhima Koregaon memorial on January 1. They strongly urge the Maharashtra government to take stringent immediate action based on the original FIR lodged in the Bhima Koregaon case, which implicated Hindutva leaders Sambhaji Bhide and Milind Ekbote and to stop the diversionary tactics being employed to falsely implicate and target activists with long standing credibility of working for the rights of the people. In the wake of news reports of the police having dropped criminal cases against the two Hindutva leaders for rioting in the past, there is a strong suspicion of foul play to protect these individuals with criminal antecedents.

1. The immediate and unconditional release of democratic rights activists, workers, families falsely arrested in alleged connection to the violence at Bhima Koregaon
2. That the false UAPA charges against the activists, workers, Dalits, Muslims, Adivasis be dropped
3. That the real culprits of the Bhima Koregaon violence, Hindutva leaders Shambhaji Manohar Bhide and Milind Ekbote who instigated and planned the attacks on visitors to Bhima Koregaon, be arrested and prosecuted under law
4. That the draconian UAPA be repealed
5. That the attacks, criminalisation and reprisals by the state on dissenting voices in civil society, democratic rights activists and to stifle constitutional freedoms be stopped immediately.