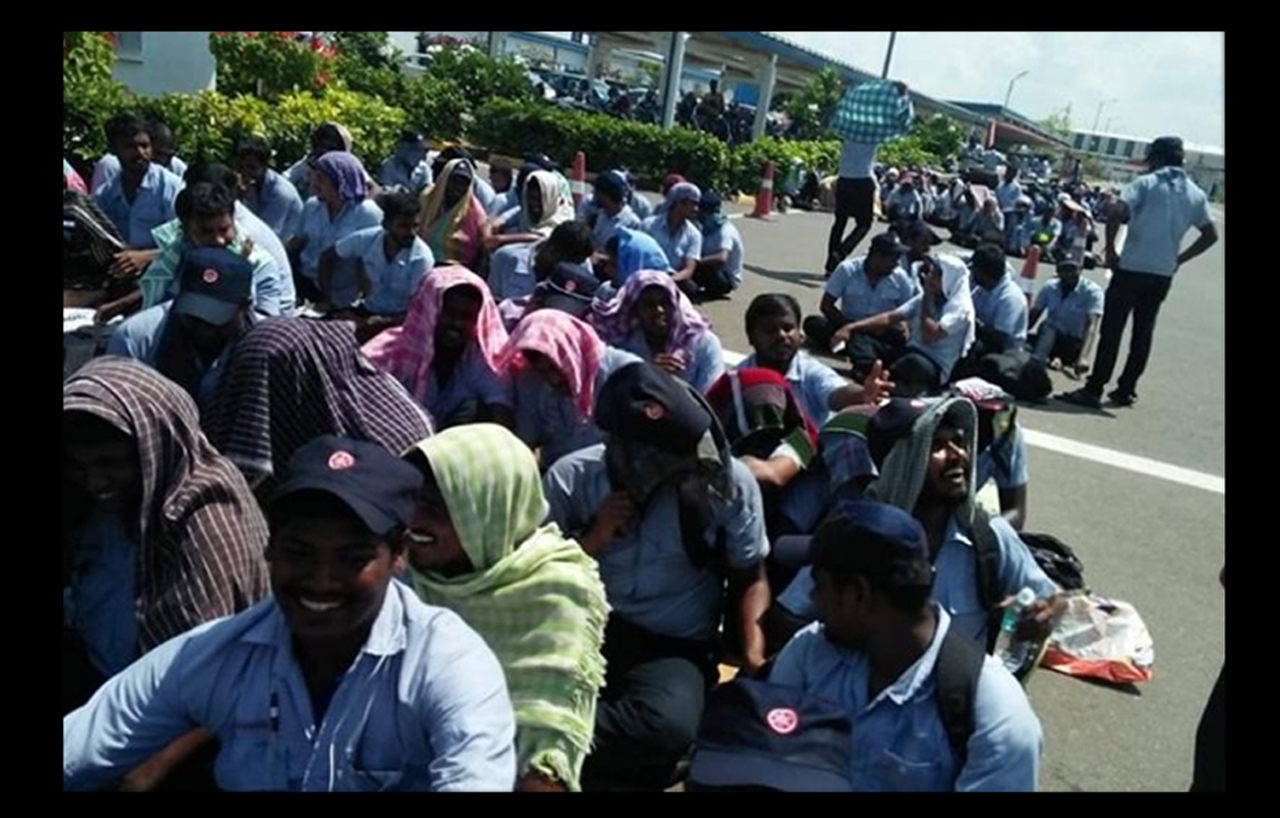 Auto manufacturers in the Oragadam belt, near Chennai, including Yamaha and Royal Enfield, and a few auto ancillary units are witnessing a labour protest for past few days. While the workers are determined in forming unions to fight for their rights, the management are steadfast in their opposition to this. At the Yamaha Motor India’s plant at Oragadam, more than 750 permanent workers went on strike from September 20 and the workers at Royal Enfield went on strike from September 24. We present below a report on the strike by Yahama workers. This report has been prepared by tnlabour.in – blog on labour issues in Tamil Nadu.

Over 750 permanent workers of Yamaha India Pvt Ltd, have been on strike since September 20, after two of their co-workers were summarily dismissed by the management for participating in union activities. The workers had registered a union with CITU and had given a charter of demand and raised an industrial dispute on September 10 on which conciliation proceedings were going on. The workers who were also union office bearers, had requested permission for attending a conciliation meeting called by Labour Department on an industrial dispute raised by the union.

But the management denied permission to the workers. Hence the workers took personal time off after intimating the management and went for the conciliation meeting. Even though there was a process for taking 2 hours off every month for personal work in Yamaha but when they reported to work on Friday, September 10, they found that their access cards had been revoked.

This prompted a spontaneous reaction among the workers and they went on strike. The workers sat on a sit-in protest in the factory demanding immediate reinstatement of the dismissed workers without any disciplinary proceedings. The workers and the union representatives have alleged that the management has sent bouncers to the workers’ families to intimidate them. The union has registered a complaint in Kanchipuram police station, though no FIR has been filed so far.

Yamaha India, a subsidiary of Japanese manufacturer Yamaha has three plants in India – one in Surajpur, Faridabad and Vallam. The Vallam plant, situated near Chennai, was started in 2015 and manufactures Fascino, Ray Z, Ray ZRr scooters. In 2017, Yamaha announced plans to expand the Vallam facilities. Currently, the production is at 2200 scooters per day. 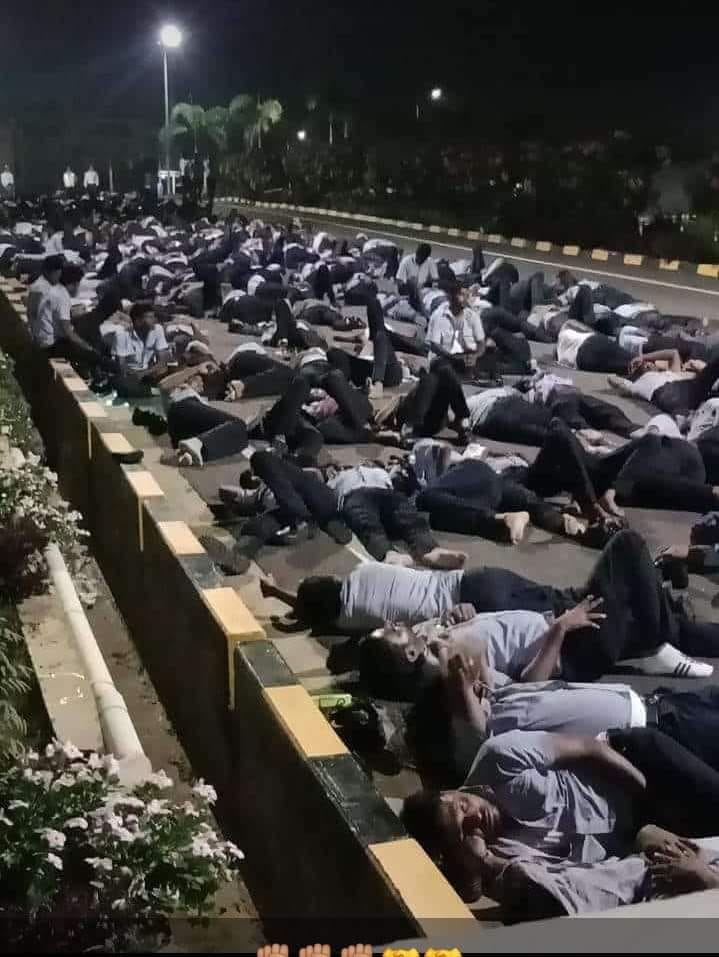 There are 814 permanent workers including 24 women workers, and 2000 contract workers and trainees in the factory. Some of these workers have had prior experience in related automobile factories such as Ford and Royal Enfield. The permanent workers, with over 3.5 years of experience, are earning about Rs 14000 per month.

According to workers and Muthukumar, CITU Kanchipuram District Secretary, the current strike is against the abusive treatment of workers in the factory, which was the primary reason that led the workers to form a Union. Muthukumar points out that Yamaha is not a supplier but is an OEM manufacturer and has a legal and moral obligation to ensure the rights and conditions of workers are maintained with high conformity.

He said that in the past, workers who have come with training and experience have been asked to take up janitorial work such as cleaning the toilet or housekeeping work. Workers have been called using derogatory words often. This has led to feeling of indignity among workers. Hence workers started organizing, demanding humane and dignified treatment at shop floor.

The workers went about legally to raise their issues by registering a union and raising an industrial dispute under Industrial Disputes Act on which the Labour Department called for conciliation meeting. But the management has not attended the conciliation meeting. Comrade Muthukumar sees this trend as a blatant violation of laws by MNCs who do not see any reason to adhere to even basic norms pertaining to workers.

Muthukumar says that in addition, the management had also made enquiry into personal profiles of the eight union office bearers, violating their personal privacy. Out of these 8 union representatives, the management had targeted the two workers from the most economically disadvantaged families (both workers do not have a father) and has gone after them, says Muthukumar.

These workers were given termination letter on September 20 without any due process, which they refused to accept. They were denied entry into the bus on September 21. However the workers boarded the bus with the help of other workers but were denied entry into the factory. According to the workers, the only reason, these workers were targeted is because they were leading the unionising efforts.

This action forced the workers to initiate a spontaneous strike and on-site protest. The workers recognized these dismissals were not only an act of victimization, but if left unchallenged would also mean they lose any guarantee of employment in spite of being ‘permanent employees’. Understandably, the workers have made this the only point of their demand, making sure that their dismissed comrades are reinstated.

However, the intransigence of the management continues, say the union representatives. In the dismissed workers accounts, Rs 50000 has been credited with no information on why this has been done. The management is said to have sent bouncers to the houses of the 8 union representatives and have intimidated that the workers will be dismissed if they do not stop the strike. They have also accused a worker of stealing and absconding. The union has filed a criminal complaint with Kanchipuram Superintendent of Police but no action has been taken so far. The management has not appeared on a conciliation meeting called by the Labour Department on September 23.

However, the strike has captured the imagination of workers and working class activists throughout India. Outpourings of solidarity continue from various sections of workers. Workers of Royal Enfield and Hyundai have supported the workers by arranging food for the workers. MSI Automotive workers who themselves are striking, have given solidarity to Yamaha workers. 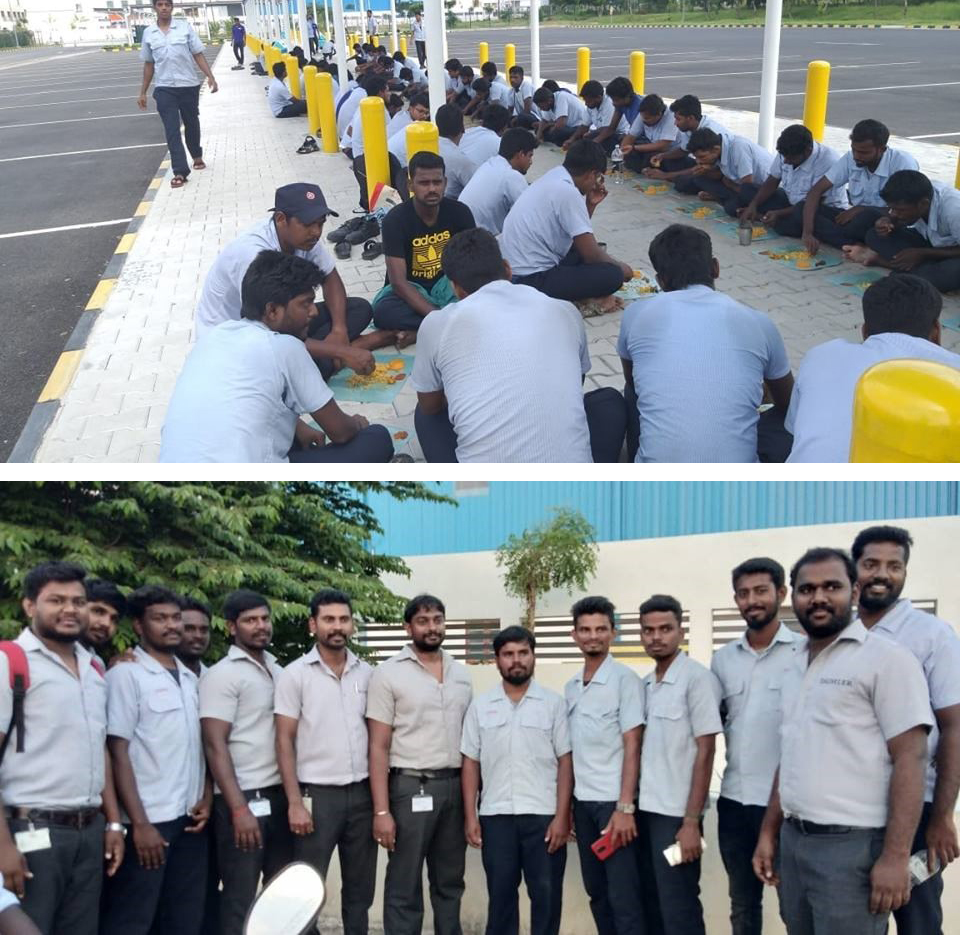 Above: Hyundai Motor Employees Union members(HMIEU) show their solidarity with Yamaha Motor workers and also have a lunch with them. Below: Daimler India Employees Union contributes Rs.6000 to the striking Yamaha Workers for their food expenses.

The working conditions in Yamaha are quite similar to repressive management tactics that were witnessed in Maruti, Hyundai prior to 2012, where low wages, harsh working conditions and abuses at shop floor were the norm. After tragic incident in Maruti in 2012, where a HR manager died, the management had followed the process of keeping permanent workers in better conditions, while exploitation of contract workers had continued.

With the Central Government sanctioning of Fixed Term Employment(FTE) and National Employment Enhancement Mission(NEEM), the automobile sector management seems to be on the repressive path again. Renault Nissan has announced VRS to its permanent work force, Royal Enfield is said to be implementing FTE and NEEM in its Oragadam and Vallam factories. A concerted action by the unions by organising all the workers in the factories can effectively take on this challenge by capital.