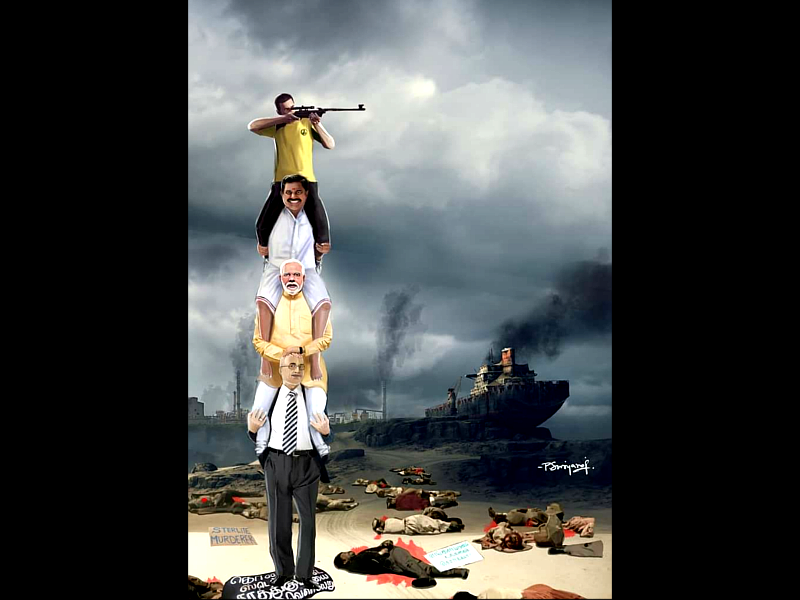 This report is reproduced from tnlabour.in. The original article can be found here.

Workers and workers’ organizations across Tamilnadu rallied against the brutal police action against ‘anti sterlite’ protests in Thoothukudi that left 13 killed and injured scores of people. Workers from MRF, TI Metal, Dongsan, Bhadra, IT workers, agricultural labourers, fish workers are few that have participated in gate meetings and protests lending solidarity to the ongoing protests and demanding permanent closure of Sterlite in Thoothukudi. 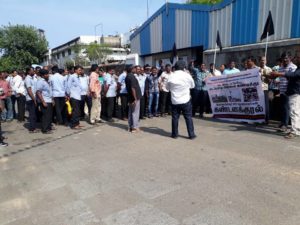 The residents and community organizations in Thoothukudi have been struggling for decades against pollution by Sterlite Industries’ copper smelting plant. The company has been found in violation of several environmental and labour laws in the country since its operation in 1997. Environmental activists have documented groundwater and air pollution in the neighbourhoods and have petitioned various institutions including TNPCB and NGT to shut down the polluting factory and bring the polluter to justice.

The company also has a track record of predominantly employing contract labour in its plants. As told by an ex-worker to Thozilalar Koodam, an attempt to form a union in the factory led to failure partially due to lack of support by left unions in the region. Since then, the company has used migrant labour as contract workers. Several cases of death and injuries have been documented by activists while the company has continued to operate with impunity.

Hence its not surprising that communities started agitating since March 24th, demanding permanent closure of the plant. The protests were triggered after a permission was granted to the company to expand its operations. There has been larger working class support for this, with several working class groups including fisher communities, loaders, and port workers lending their solidarity to these struggles through strikes and other protests.

After the protests in early March, the company had sought police protection from protests that was granted by an High Court order. The people of Thoothukudi, who were vehemently against the expansion, had petitioned the courts against the expansion citing misrepresentation of environmental impact and pollution levels. The clearance itself had been obtained only after the NDA government had diluted environmental regulations by doing away with public consultation for expansion projects. (Read this article on how NDA government helped Vedanta group obtain clearance using technical procedure bypassing mandatory public hearing).

The court had moved at a very slow pace on this issue reserving its verdict On May 18. This order, de-facto, allowed the company to continue its construction activity. By delay, default and deliberate negligence of violation, the executive and judicial institutions have supported corporate agenda, even as the community was opposing this project. These institutions of governance have ignored the damage caused to common property resources such as land, water and air but have rushed to protect ‘private property’ by calling in the police to protect the company.

On May 22nd, organizations and communities led a peaceful protest to mark the 100th day of the struggle. The police had, as usual, imposed section 144, limiting the protest spot away from the institutions and company’s premises. This did not pass muster with the communities and the committee leading the protests, who have seen their due representation to institutions fail again and again. The community was determined to represent itself to District Collector’s office on May 22nd. According to local witnesses, lakhs of people had to pass over 300 barricades set by the police, leading to people getting furious.

The police action subsequently leading to police firing, clearly escalated the violence and have led to 13 people killed in three separate police firings over 3 days. The institutions, since then, have belatedly gotten together their act, leading to ban against expansion byHigh Court and closure of the plant by TNPCB.

However, at the same time, there has been a massive crackdown on communities(similar to the police atrocities on fish workers post Jallikattu protests). Internet has been shutdown, police continue to raid peoples’ houses and arrest scores of community members. Media, Government officials and even Sterlite CEO have started harping ‘outside’ and ‘nefarious’ elements, leading astray the peaceful protests, notwithstanding the fact that institutions have failed to protect the interests of workers and communities that has led to the massive loss of lives and rights. To blame the police officers for the deaths, but failing to address all the actions and in-actions by the courts and government that led to this moment is short sighted and deceptive.

Workers and working class organizations have vociferously condemned and protested against the police firings at Thoothukudi and have demanded that Sterlite factory be banned.

On 22nd May evening, the day of the massacre, Pricol workers held a condemntation meeting at the factory gate in Coimbatore. 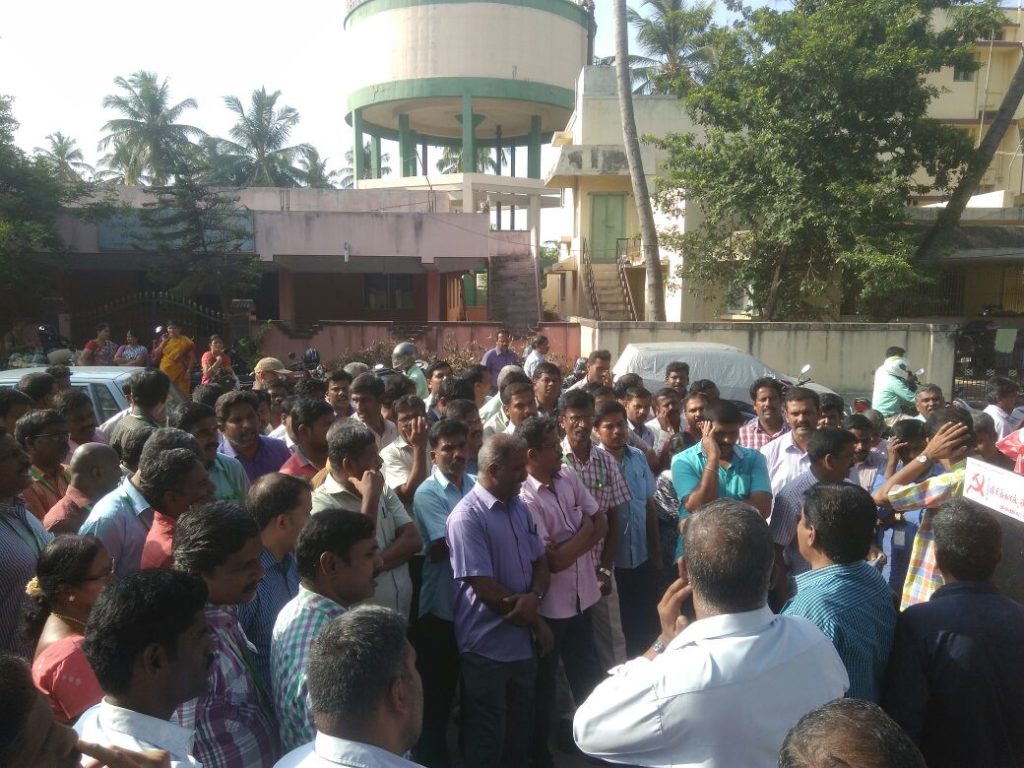 On 23rd May 7:30 AM, TI Metal Forming Workers Union affiliated to NDLF held a demonstration outside the factory gate at Avadi. It paid respect to the slain martyrs and condemned the state terrorism that kills its own people for the sake of multi national corporates. 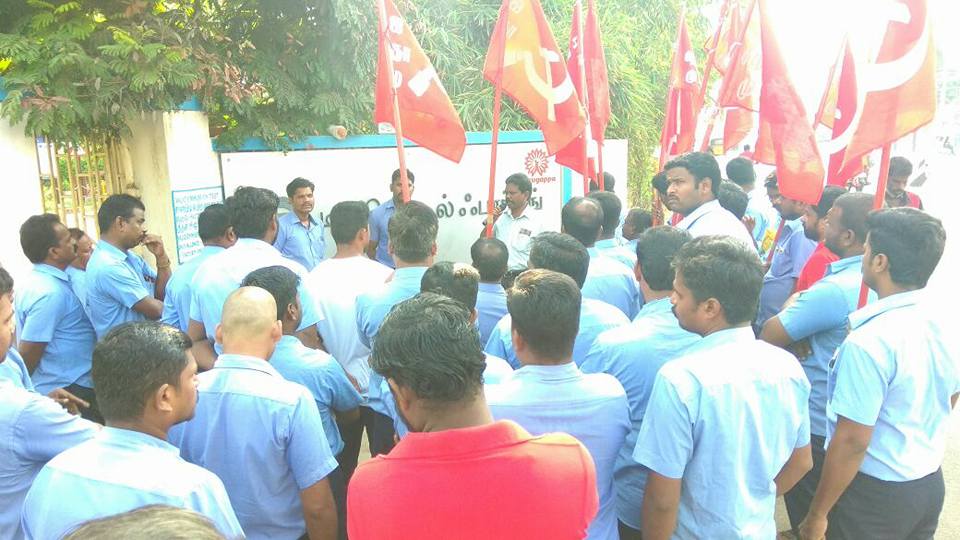 On 23rd May 3PM, over 200 MRF workers assembled near the factory gate to condemn the State Government calling it as a stooge to Central Government. The protest was organised by Thozhilalar Seeramaippu Iyakkam. 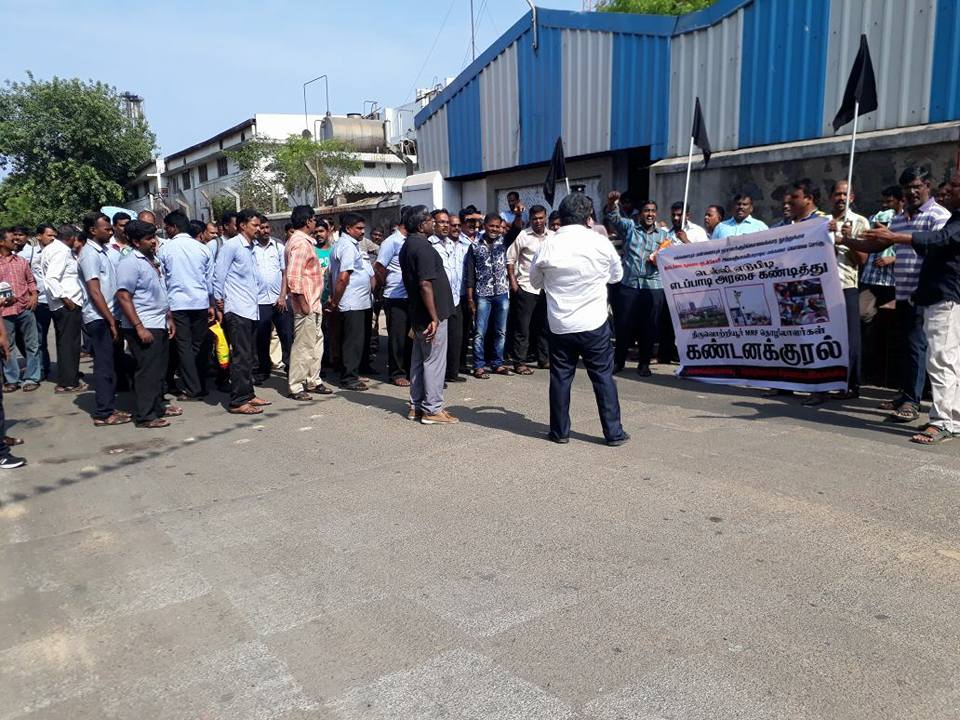 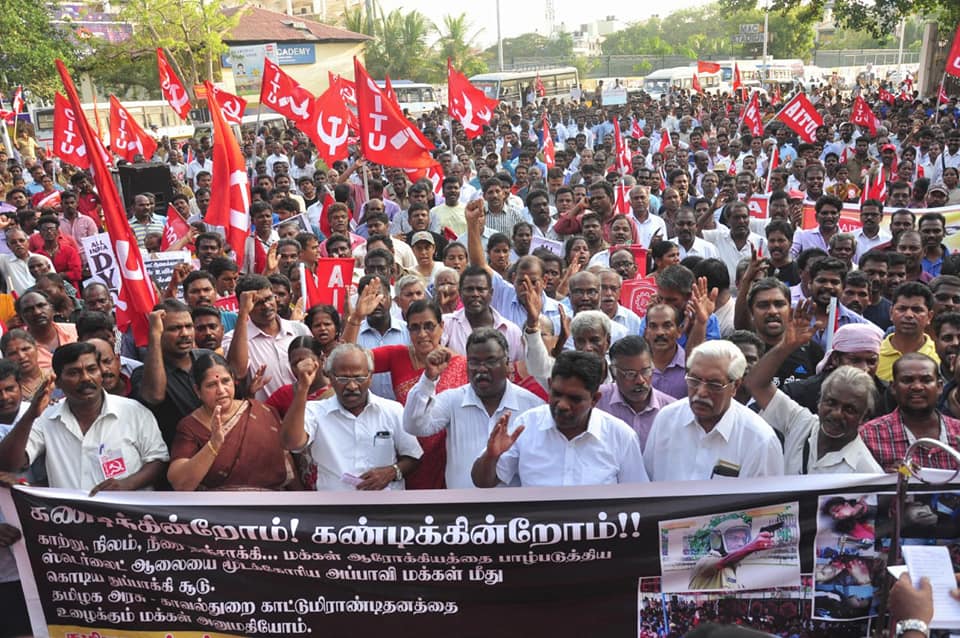 On 23rd May, AIARLA workers participated in a protest led by CPIMLL in Kumbakonam against the police firings at Thoothukudi. 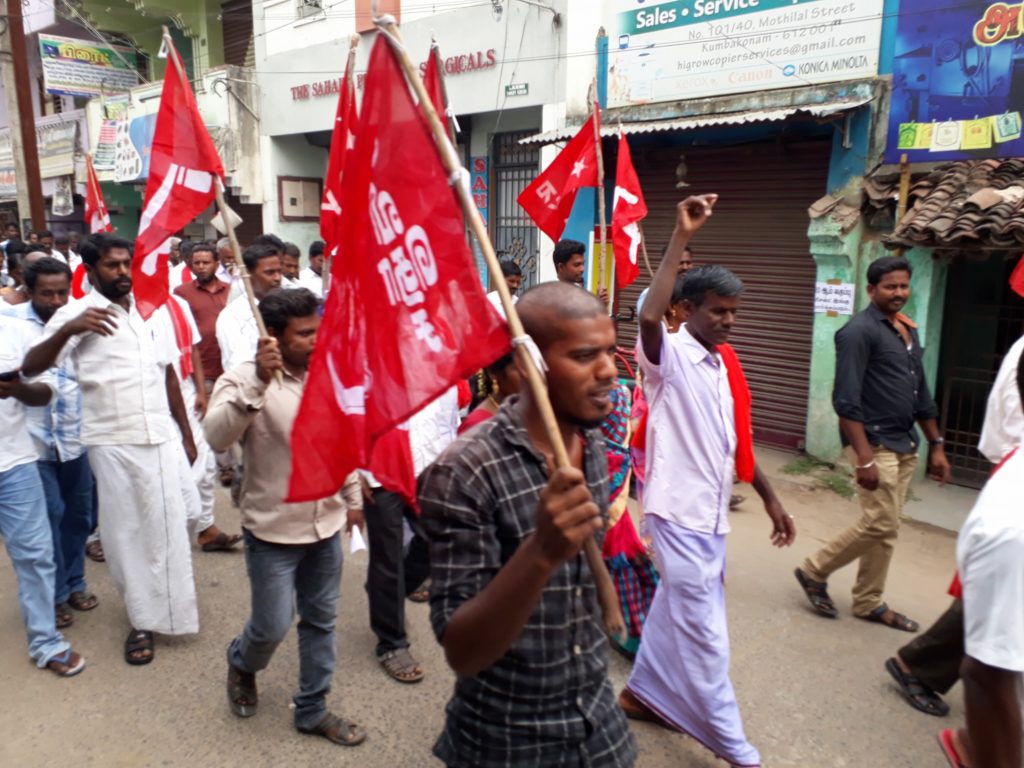 On 24th,May, IT workers from Tech Mahindra City held a human chain in Chennai demanding ban to sterlite and expressing solidarity for Thoothukudi protest. 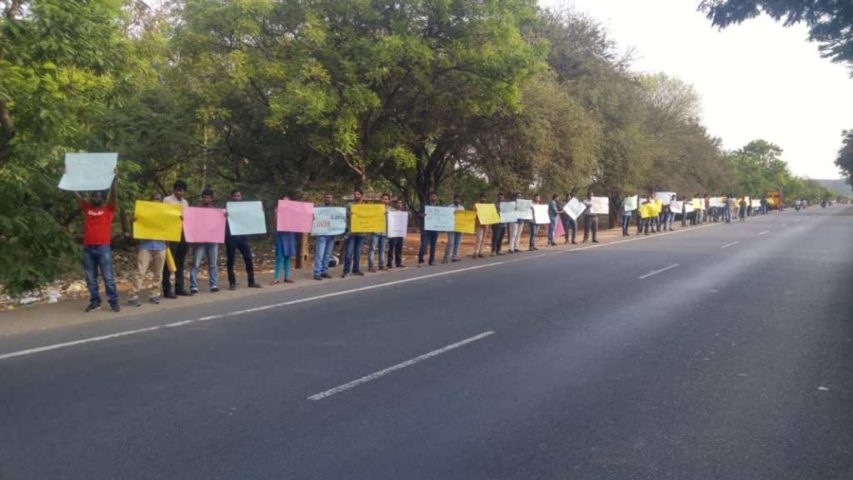 World Federation of Trade Union representing more than 9.2 crore workers in 126 countries has release a press statement condemning the murder of 12 protesters. ‘Once again bourgeoisie ranks the people’s health and life lower than its profits and the riot-police defended these profits by murdering workers. The WFTU demands the definitive closure of the plant and the immediate punishment of the responsible ones for these murders.’, has said WFTU. 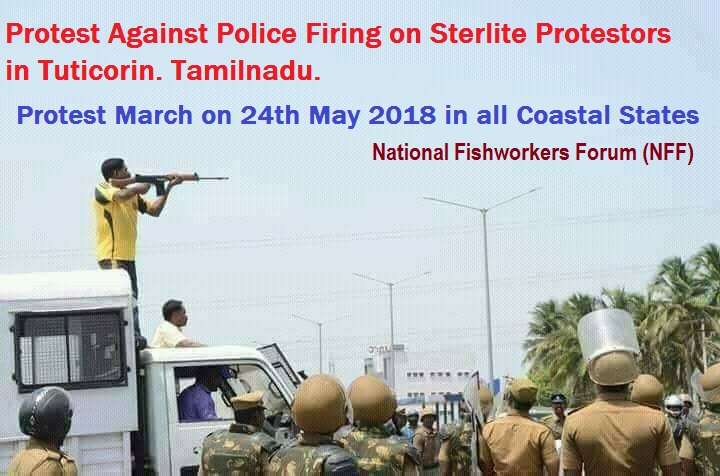 Human rights activists and Civil rights organisations CDRO, NCHRO and PUCL have released statements condemning the brutal killing calling it akin to Jallianwalla bagh style massacre. They have especially noted the targeted killing of individuals. CDRO has especially noted that ‘The proposed plan for peaceful protest before the plant premises was well known to the authorities much earlier’. PUCL has said that ‘What however occurred on 22nd May, 2018, was a complete travesty of constitutional rule and a total breakdown of the rule of law and orderly governance’ and that ‘The Tamil Nadu Police could not have committed such acts without the tacit or unspoken permission from the TN State Government.’. CDRO has demanded that the police officials and district administration be suspended. NCHRO has demanded that a judicial probe be ordered.