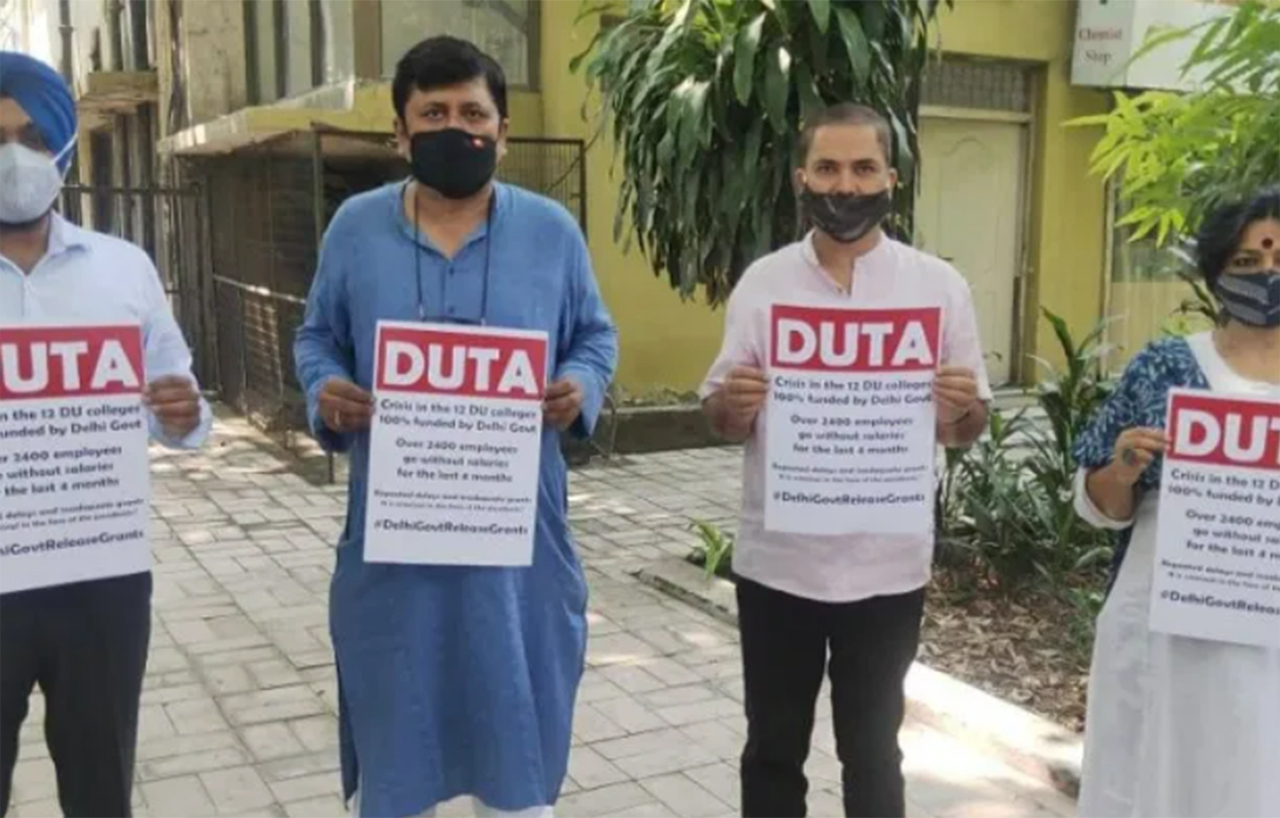 Delhi University faculties fired from service amidst the Pandemic

The services of twelve ad-hoc assistant professors working for several years in a college affiliated to Delhi University were suddenly discontinued earlier this month putting them in a precarious position amidst the raging pandemic. The report was initially published in Workers Unity.

Even as the second wave of Coronavirus epidemic exploded in Delhi, affecting millions of people, twelve ad-hoc assistant professors working for years in a college affiliated to Delhi University were fired. Five of them, including a pregnant woman, were battling the deadly virus along with their families at the time when the order was issued.

According to the Indian Express, one of the sacked teachers stated that seven out of these twelve teachers were from the reserved categories (four OBCs and three SCs), and most of them were sole earning members in their families.

The Delhi University Teachers Association (DUTA) has strongly condemned this inhuman and arbitrary decision of the college administration. On May 27, DUTA went on a day-long strike to protest against this order without any prior intimation by the governing body of the Vivekananda College affiliated to DU.

Talking to News Click, DUTA President Rajiv Ray said: “Acting Principal Dr Nina Hindrajog has refused to listen to any voice of reason and is running the college as her fiefdom.”

Earlier, six members of the Academic Council and the Executive Council had also written a letter to the Vice Chancellor PC Joshi against this decision.

Reports of ad-hoc assistant professors being fired on the pretext of lack of available work has been coming out frequently; it has also been reported that the university has asked for such lists from the affiliated colleges. These twelve ad-hoc assistant professors from Vivekananda College have been sacked for the same reason; their contracts have not been renewed after April 29

The Delhi University employs 4,500 ad-hoc assistant professors, who are reappointed every four months. These professors say that their working conditions are exploitative. Even pregnant teachers are forced to serve without being granted maternity leave.

According to News Click, one of the ad-hoc assistant professors, requesting anonymity, said that his removal was a disaster for him and the family.

He said, “The future of ad-hoc assistant professors in DU is so tumultuous that most people do not even get married and those who get married postpone the idea of ​​having children. I served the college for eight years and hoped that it would stand with us in the dark times. This decision has given me sleepless nights and inexplicable mental agony. Who will give us a job in the midst of an epidemic? It also did not care for the eight-month-old pregnant teacher who was simultaneously battling the Coronavirus.”

DUTA President Rajib Ray said that this was in gross violation of the letter dated December 5 by the Ministry of Human Resource and Development, which clearly stated that no ad-hoc assistant professors were to be removed from their posts. He further added that this is the time when people need their jobs the most – the administration cannot do this to these people now.

He also said that an overwhelming majority of the college teachers have shown support for retaining the services of the ad-hoc teachers. The union has demanded that Hina Nandrajog be immediately removed from the post of acting Principal as she has already completed the five year term and is violating Delhi University rules by acting as Principal for more than five years.

Rajib Ray added: “DUTA has been drawing attention to the fact that these twelve teachers have been teaching in this college for the past several years. The longest serving teacher amongst these twelve has been teaching since 9/1/2014 and others have been teaching since 2016 and 2018. It is a matter of great shame that the acting Principal has taken away the livelihood of these teachers at a time when these teachers and their families are struggling to cope with a national health crisis.”

Update: As per News Click report: “The governing body of the colleges remains the highest-decision making body for its affairs. Recently, in a meeting, the governing body had decided to continue with the removed teachers.”