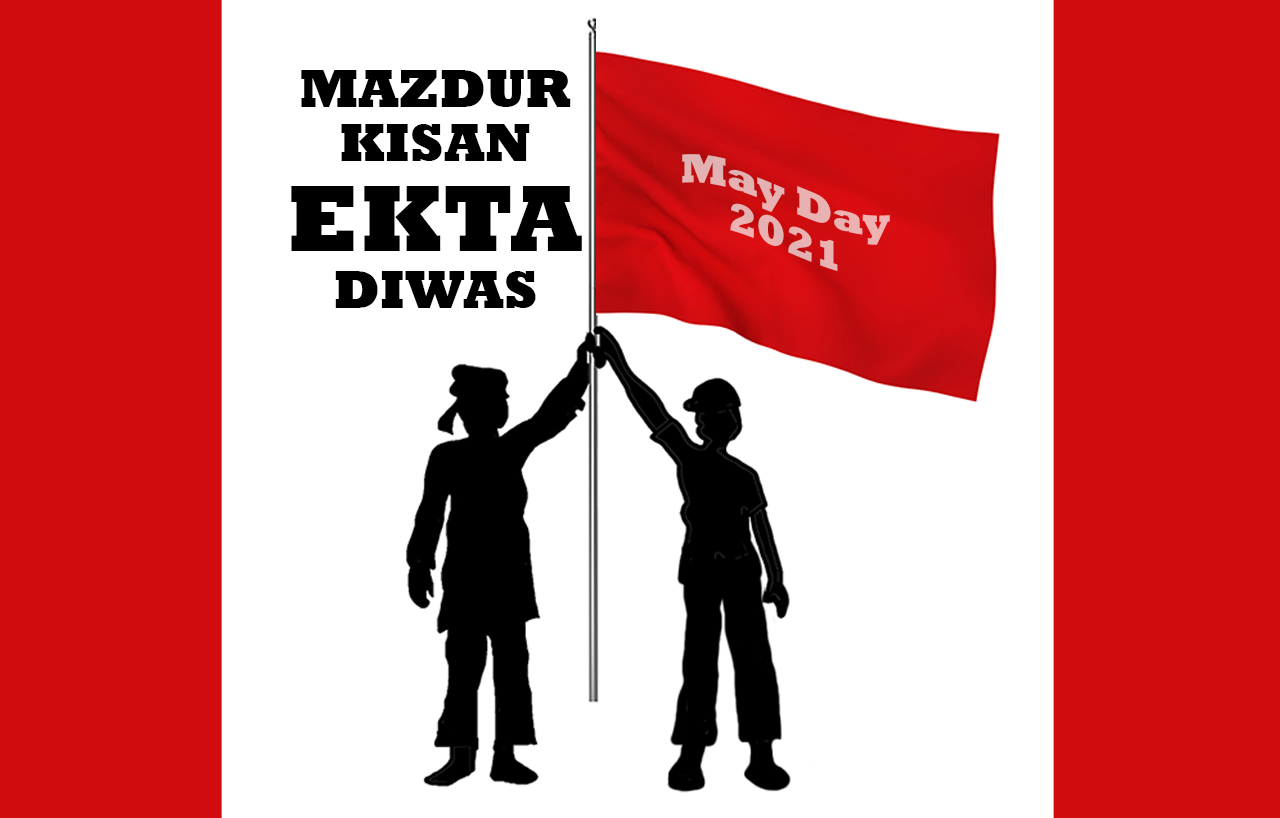 This May Day is in the Name of Worker-Farmer Solidarity

May Day 2021 was celebrated in India by trade unions and farmers together, as decided in a joint meeting on April 28, Samyukt Kisan Morcha and the Central Trade Unions. Discussions continue on how to take the joint battle forward, against the draconian laws attacking the rights of the workers, farmers and civilians. A Groundxero report.

After a joint meeting on April 28, the Samyukt Kisan Morcha (SKM) and the Central Trade Unions decided to celebrate the May Day jointly, as Mazdoor-Kisan Ekta Diwas, by highlighting the demands and rights of workers, farmers and the rights and livelihood issues of the Indian people. It was also decided that such programs should take place more widely across the country. The following demands were put forward:

The joint forum will meet again this month to further discuss joint actions and future programs. As we stand at a historical crossroad in the history of Indian working class movement, It remains to be seen whether this May Day could also denote a beginning of deeper critical and constructive engagement with the issues of the marginalized workers – the farm labourers, dalit workers, women, who are constantly at the risk of feeling othered within the ongoing battle against the State-Corporate nexus.

Through the joint initiative, this May Day saw a further development of what has been termed as a “rock-like solidarity” between the farmers’ united struggle and the trade union movement in India. The joint programs organized primarily by the All India Kisan Sangharsh Coordination Committee and the Central Trade Unions began on November 26, last year. The farmers gave the ‘Delhi Chalo’ call for November 26-27 against the three draconian farm bills, organized by over 500 farmers’ unions based in Punjab, Haryana, Rajasthan, Uttar Pradesh, Uttarakhand, Kerala and other states. The trade unions organized a national strike on November 26, joined by 250 million workers across the country, against the tyrannical anti-worker labour codes as well as in support of the ongoing farmers’ movement. The farmers’ and the workers’ unprecedent demonstrations in terms of mass support and collective dissent against the central government stalled the nation. 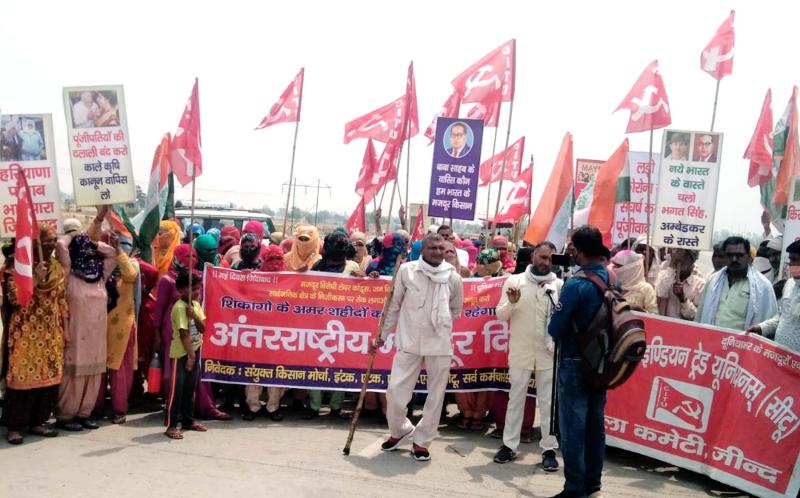 Joint rally by farmers and workers on May Day, Jind

The demands of the workers and the farmers coincide not only as in an ideological battle, but in the day-to-day hardship that the Indian working class has been increasingly facing due to the blatant privatization in both agriculture and industrial fields, worsening contractualization norms, unemployment, precarious employment, informalization, migration, amending laws around PF and pension, amending laws around electricity consumption, systematic deprivation of the underprivileged class from public distribution system through the Essential Commodities Amendment Act, health and education facilities, increasing disempowerment of the specially abled – the list is endless.

Moreover, strategic fanning of hate in terms of religion, caste and gender and the resulting gaping discrimination are turning India into one of the unhappiest countries in the world – the brunt being borne by the working class. The way the Central Government has completely failed to handle the coronavirus situation has added to their misery. Five months from the massive demonstrations, the need for the farmers’ and the workers’ unions to come together and continue with more militant and inclusive demands is more vital than ever at this moment. 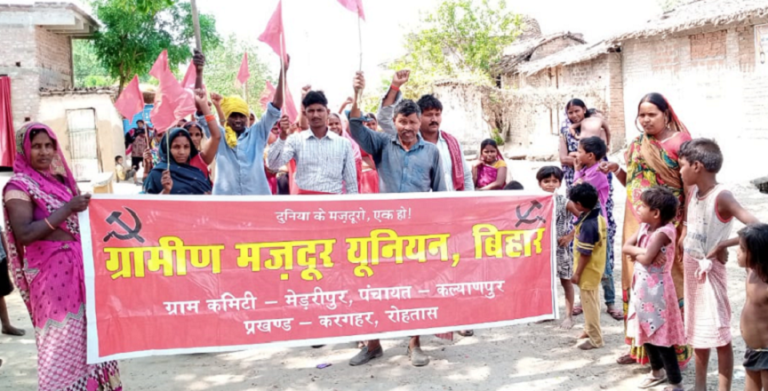 May Day celebration in a village in Bihar

The joint meeting of the Forum of Central Trade Unions with the United Kisan Morcha unanimously resolved to advance and unite the struggles against the disastrous policies of the anti-people, anti-farmer, anti-worker Modi government. The joint forum discussed the exploitative policies that the government has been implementing in every field; how the victims of the ruined economy are being further pushed to the ground, as the Indian Government kept eliminating indigenous manufacturing capacity of the country.

It was noted in the meeting how all industries including services, natural resources, health and education were being privatized as they spoke. The working class was turning into slaves of the corporate companies; and how the government, in a mutually serving entente with these multinationals, was curbing democratic rights, freedom of expression and right to dissent. 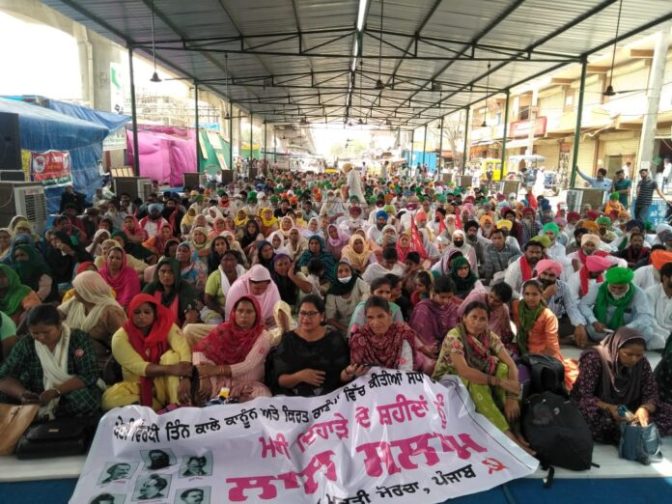 May Day celebration at the Delhi border

Such disastrous policies are easily reflected in the government’s brutal insensitivity in addressing the second wave of the coronavirus epidemic, which has led to thousands of deaths across the country, which would have been preventable if not for the government’s megalomania. This is an inevitable result of the disorder created in the public health system through privatization. Even the vaccination policy implemented by the Modi Government is promoting profiteering, costing the lives of the people not only in India but other poor countries. The joint meeting condemned the government on its failure to meet the challenge of the epidemic and to provide (by choice) free immunization for all.

Other than the CTUs, the farmers’ movement has been and continues to be supported by many civil society groups, independent activists and civilians and smaller trade union activists, in particular the Mazdoor Adhikar Sangharsh Abhiyan (MASA) that currently represents 15 trade unions across the country. This May Day is in the name of the hope, solidarity and undaunted revolutionary spirit that we have seen in the past few months among the people, who the the joint committee of farmers and workers represent. 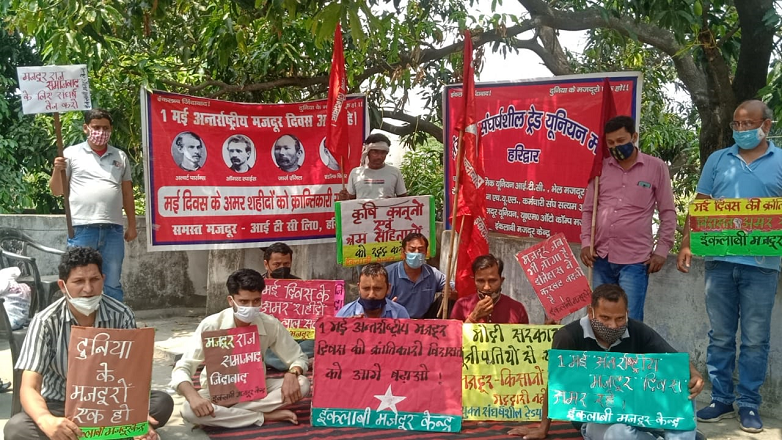 On May Day, thousands of workers reached the farmers’ dharna sites on the borders of Delhi. The leaders stated how under the guise of corona, the central government launched direct attacks on farmers, laborers and common citizens. They said, at a time when the country is going through an epidemic, instead of fighting the epidemic, the government has worked to create many epidemics like three farming laws and four labor codes. They also explained how the BJP and allied parties were afraid of Kisan Mazdoor Ekta, and tried to incite the workers against the farmers in many ways. Solidarity programs were held in Delhi, Uttarakhand, Haryana, Rajasthan, Bihar, West Bengal and other states.

Women farmers on May Day