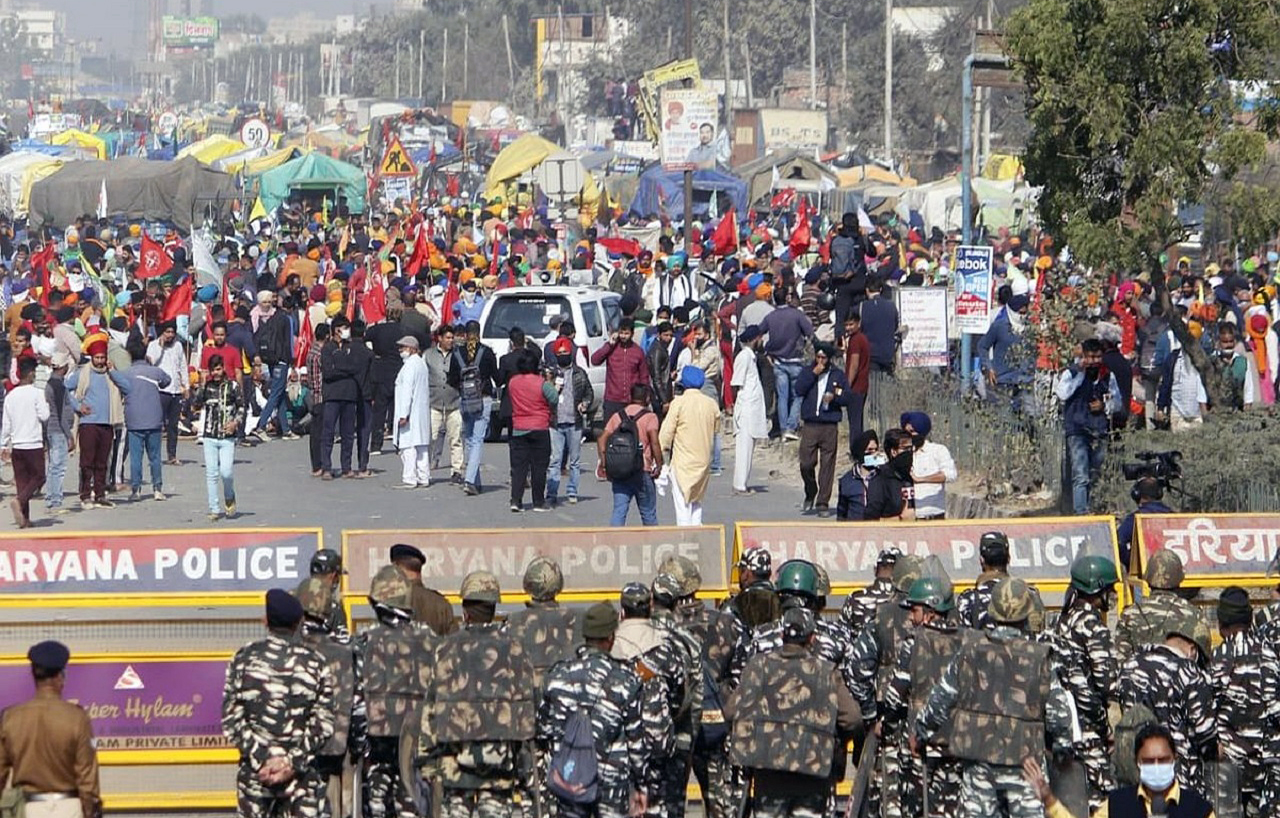 The Samyukt Kisan movement of AIKSCC, RKMS, BKU (Rajewal), BKU (Chaduni) and other farmers’ organisations has called upon the GOI to immediately address the issues of the farmers and solve them, rather than create subterfuges about talks, with no solution in mind.

This was stated in the combined press release of all struggling organizations, even as tens of thousands of farmers continued their march into Delhi, surmounting huge obstacles and repression by police under direction of BJP government. The waiting lines of their rally are already extending more than 80 km from Delhi borders.

The joint morcha of farmers criticized the Uttar Pradesh government for its brutal, barbaric repressive behaviour against farmers’ protests in the state. Protestors from Uttarakhand have also been camping in Uttar Pradesh since they have been disallowed to proceed further and detained by the UP police.

This massive gathering is part of the process of events in this historic and unprecedented movement of farmers who are here to protest in Delhi till their demands are met. Farmers bodies stated the farmers have not come to stay, but to get their demands fulfilled. The Govt should not side track this main issue.

The farmers bodies came down heavily on the GOI for complete failure to address the issues being raised by the farmers, viz. annulling the 3 Acts and withdrawing the Electricity Bill 2020. While the Govt. is still justifying these Acts as helpful to farmers and their income, farmers all over the country want these Acts repealed. These Acts will not only undermine Govt. procurement and MSP, they will completely subjugate entire farming to Contracts by Companies, Indian and foreign corporations and deprive farmers of their land and respectable livelihood. Experience of contract farming has been disastrous and farmers know how it increases indebtedness and sale of their land. Farmers leaderships have attacked these laws also for destroying the PDS system, loss of control over food costs, promotion of black marketing and undermining food security.

Countering the government propaganda that farmers are being egged on by vested interests like political parties and commission agents in this agitation, farmer organisations pointed out that this movement is beyond party politics and any sponsored event would never have seen such massive groundswell of mobilization, or calm determination to get demands met, or such a sustained movement for months on end. They said that the Govt. should stop spreading canards and get down to sincerely addressing farmers’ demands rather than avoid them.

They questioned the government’s sincerity in offering talks since what the GoI is keen on doing is to defend what it has already done. This is apparent from the fact that the Govt. goes on saying that it will “explain” the benefits to the farmers, without presenting any concrete agenda even once that they are fully ready to go back on what has been enacted.

“The lack of sincerity of this government is apparent in numerous ways. Empty assurances and statements will not be believed by farmers any more. The government chose to ignore farmer protests for months on end now, and tried to malign it in numerous ways. It spent crores of rupees of taxpayers’ money in a publicity blitzkrieg in the name of ‘farmers being misinformed’. This very attitude and approach of the Govt. is unacceptable”, said the statement.

The farmers’ leaders also countered the fact that these protests are mainly Punjab-centric. The Govt. also had extended its invitation for December 3rd talks only to Punjab farmer unions, pretending and arguing that other farmers are happy with their reform. “It is clear by now from the fact that farmers from various states are attempting to get into Delhi including from Haryana, Uttar Pradesh, Uttarakhand and Madhya Pradesh, that the resistance is pan-India”, the statement read. Further, while national media may choose to ignore, state governments will vouch for the fact that agitations are underway in numerous states including in Odisha, Tamil Nadu, West Bengal, Maharashtra, Karnataka, Telangana, Andhra Pradesh, Jharkhand and so on.

The argument that reforms are painful but needed is untenable since no evidence of the positive outcomes for farmers, in India or in other countries, has been shown by the Govt. so far to show that farmers have not been further indebted, they have not been deprived of their land holdings, prices for farmers have been remunerative, incomes have shot up and that the government need not support farmers any more, once left to so-called free markets. Farmers are not naïve to believe that agri-business corporations are not out to profiteer and are there with farmers’ best interest as their key objective.