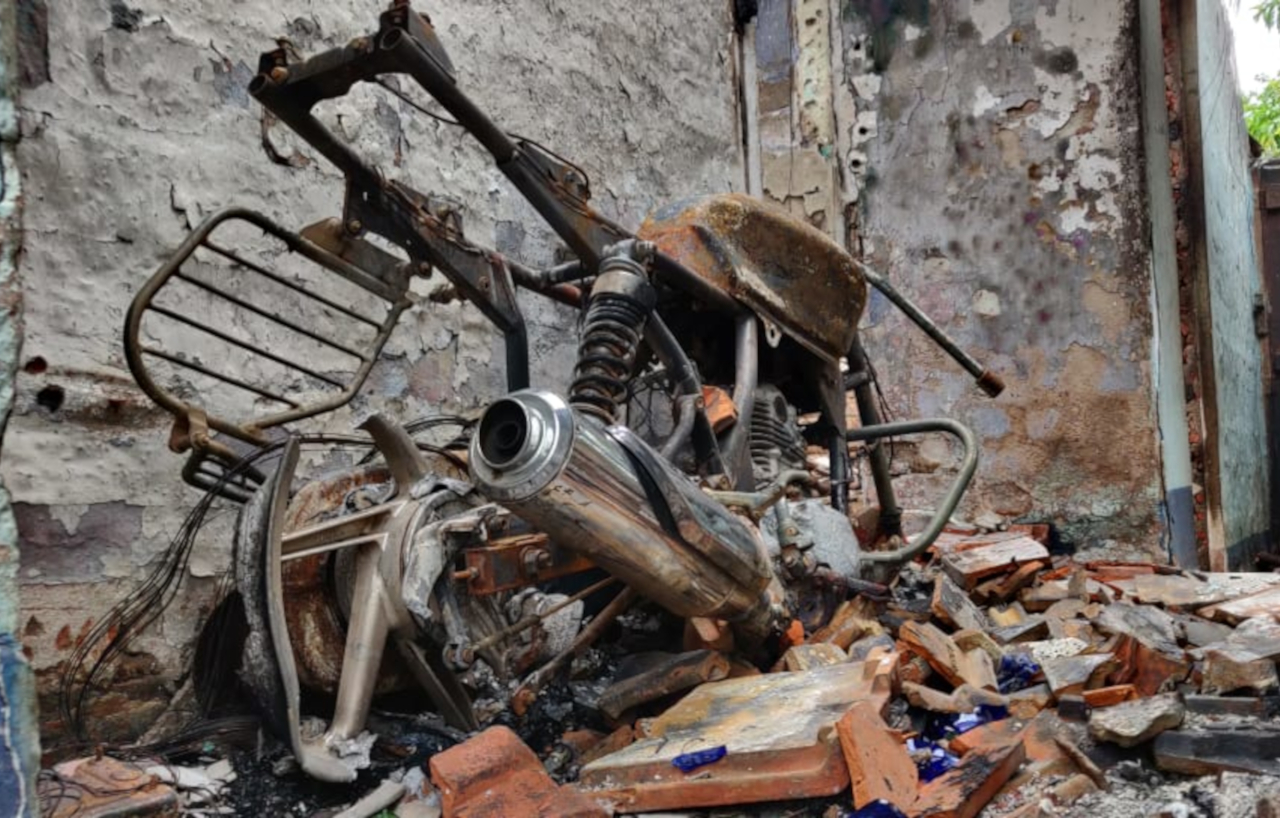 Fact Finding Report on Telinipara Communal Violence (2020): What was Lost on the River Side

The communal violence in Telinipara in Hooghly district of West Bengal occurred amidst the raging pandemic during the lockdown in early May 2020. Everyone knows there was unrest, conflict and communal violence. But what had actually happened in Telinipara? What triggered the violence, and what are its immediate and far-reaching effects? This is the second report by Aamra— a study group on Conflict and Coexistence, of their post-RamNavami riots in West Bengal. The English version of the first report on Bhatpara was published in GroundXero in six parts. We are now publishing the full report on conflict and violence in Telinipara in parts. This is the sixth part of the fact finding report.

What was lost on the river side

(a) The jute mill neighbours

On behalf of Aamra, Ek Socheton Proyas, we noticed a huge demographic diversity in this area: the regional Hindi-speaking (Kurmali, Bhojpuri etc.) poor communities in the area adjacent to Victoria or Gondalpara jute mill, traditionally Urdu-speaking (now Hindi-speaking) Muslims, or poor Hindi-Urdu-speaking Muslims, Hindi-speaking Goala (cow herding communities) associated with cattle sheds, both Hindus and Muslims workers engaged in tailoring or other odd non-permanent jobs. Most of them have lived here for more than three generations. Strangely enough, the locals categorize themselves as Hindus, Muslims and Bangalis. The educated, job-holding middle-class Bangla-speakers, who reside outside the working-class neighbourhoods, are termed as Bangalis. They have remained somewhat segregated from the Hindi-speaking Dalit Hindus. The understanding of the backdrop behind the riot in this area will remain incomplete if the population and cultural differences are not studied deeply.

The localities along the Hooghly river bank, such as Chandannagar, Bhadreshwar, Champdani, Rishra, Srirampur, Baidyabati etc., were politically and culturally heavily influenced by the merchants from Holland, Greece, Germany, France and Portugal, the Dinemar (merchants from Denmark became Dinemar in the local accent) and the merchants in the British East India Company. During the Muslim rule in Bengal, a large number of Non-Bengali Muslims began to live first in Bhadreswar and then other places around it. Both before and after independence, the economic power in these areas was slowly grabbed by the Sahus, Tiwaris and Agarwalas. The jute mills depended, to a large extent, on the jute farming in the undivided Nadia-Murshidabad region, and the convenience of carrying the raw material through the waterways. It was the poor and dalit communities from the neighbouring states who became employed as mill workers, and the mills in the riverbanks became surrounded by workers’ slums – what is now called ‘line’. In this context, it is relevant to mention that George Auckland built the first jute mill in Bengal in Champdani (in 1872, according to Omali, Hooghly District Gazetteer) or Rishra (in 1855, according to Sudhir Kumar Mitra, Hooghly Jelar Itihas O Bongosomaj, 1948). What we have heard during our fact finding is that, the four jute mills where the workers in the riot-affected area are employed are Angus, Bhadreswar, Victoria and Gondalpara.

But in our recent fact finding following the unrest, ‘Aamra’ saw that neither the workers’ unions nor the Bhadreswar municipality pay any attention to the minimum necessities in these slums. The unions are only concerned about layoff, retrenchment, wage increment, and other such economic demands. Whereas, the slum-dweller workers – irrespective of religion – keep suffering from scarcity of drinking water and severe health issues, which heavily affect their everyday lives, these issues remain unaddressed by any civic bodies. The local statistics reveal how frequently the waterborne or viral contagious diseases have spread in this area. When we spoke about renovating the Ghats for crossing the river, a few recent accidents were mentioned as well.

1) The first question is, is riot a novel phenomenon in Chandannagar-Bhadreswar-Champdani? The answer is negative. A local colleague working in ‘Aamra’ informed us that in his early youth, he had experienced 4 months of curfew due to a riot that had taken place in the area in 2005. Likewise, a retired state government employee remembered that after a riot during the United Front’s rule, CM Jyoti Basu had ordered ‘shoot on site’. Therefore, it is clear that there is a history of riots in the Chadannagore-Bhadreswar-Champdani area.

2) As for Telinipara, the question that needs to be asked now is this: though the riot started there, it was spread, although in a sporadic manner, to Chandannagar Urdibazar and other areas in Bhadreswar; so should this be at all called ‘Telinipara danga’ (Telinipara  riot)? In fact, should it be called a danga (riot) at all? As a team, we have stuck to the commonly used terms. But there has been almost no direct confrontation between the two communities. Murder and sexual assault – the two universal characteristics of a riot – have not taken place. However, severe vandalization, fire, damage of property, intimidation and creating an atmosphere of fear with the purpose of mass eviction – these have indeed been the features of this commotion. We have documented the physical injuries, but have not been able to verify that ‘many people have been injured’.

3) Houses and shops have been burnt selectively. The Hindu families in Rajabazar or the Muslim families in Dinemardanga are both convinced that the other community want to evict them – so the riot might commence all over again, any day. Though they have experienced somewhat similar incidents in the past, the Muslim families told us that they had not seen such well-planned and organized attacks before.

In the recent past, communal issues have increased in number in West Bengal. ‘Aamra’ has engaged in deep investigation from Kaliachak to Dhulagarh, Basirhat to Raniganj-Asansol, or very recently in Bhatpara-Telinipara. If one tries to look for a pattern in the West Bengal riots, the recurring motif seems to be the revival of a political and politicized religion, which is not different from what has been happening in the entire nation in the past decade. ‘Aamra’ summarizes it as ‘Hindu became more Hindu, Muslim became more Muslim’. Telinipara shows a similar development. The jute mill oriented economy, along the bank of the Hooghly River, is not new to riots. Dalit Hindus and poor Muslims have lived side by side, with their ‘differences’, their mutual intolerance did sometimes turn into instances of unrest, but they have settled down, in due course, to the hand-to-mouth existence that they led.

This time, though, a continuous political provocation has played an important role, and ‘Aamra’ is seeing it as accompanied by a cultural change as well. The rationale that once promoted cohabiting is losing its ground to the rationale that promotes intolerance. The oral complaints documented by ‘Aamra’, the images of commotion and losses shared in the social media, the statements made by the political leaders – these repeatedly remind us that almost a similar incident took place a year back in Bhatpara, Naihati, on the opposite bank of the river.  Outsiders carrying weapons, selectively burning and looting shops and houses, organizing attacks, setting fire, the police and fire brigade being kept at a hold through political intervention, not attempting to stop the riot, the administration itself dividing informally in various political camps – these make one worried that further unrest might be on the table before the upcoming Vidhan Sabha election.

Just as in Basirhat, the extreme Hindutva organizations were actively working among and provoking Namasudras and Paundra Kshatriyas, seeds of hatred have been planted within the Hindi-speaking Dalit Hindus in Bhatpara and Telinipara. Even during the Raniganj-Asansol fact finding, the members of both the communities pointed fingers at ‘organized provocation’ around Ramnavmi. They stated that they had seen the Ramnavmi celebrations and processions for years, and have indeed interpreted them as natural religious expressions, but the way the festival has changed its form in recent times, had scared them. ‘Aamra’ has noted that loot, arson, eviction of the other community – these are becoming increasingly frequent. Making these small riots happen in various parts of the state is part of a larger organized plan.

The victims in Telinipara have told ‘Aamra’ that after this riot, they felt, “We have lived here all these years, but perhaps we cannot go on; we may have to really leave now.” Leave and go where? They do not have an answer. ‘Aamra’ has felt that eviction is not the primary purpose behind these riots though; the long-term purpose is to convert a scared community into ‘second-class citizens’, who would gradually lose their voices. It is precisely this confidence that the fundamentalist religion tries to instil in its followers in an organized manner, thus drowning the unemployed youth in an addiction of riots. Many of the young men have the neo-religious songs about Ram jingling as the ringtone on their cell-phones. In Telinipara as well, this was precisely what has happened with the youth, and it has happened in an organized manner.

1) The wall that has now come up, thus, is wide and strong. Relief camps were organized in the riot-affected Paikapara region. Many victims from both the communities came there. Several other initiatives were also taken in order to understand the feelings of the two communities, to bridge the gap. One can say that it will not be easy to demolish the wall just yet.

2) The communal unrest took place during these dark days of lockdown and pandemic. This will remain as a bloody example of how the coronavirus was used for communal purposes. The Bangla-speaking people engaging with the politics of religious polarization, the increase of communal mentality in the workers’ slums, the void within trade union movements – these are the various indicators that we must note.

3) The local TMC leadership is divided between Hindus and Muslims. The Hindu leaders are campaigning in support of the Hindus and the Muslim leaders, in support of the Muslims, and hence are taking direct part in the process of dividing people in the violence. More than the formal, organization presence of RSS in the area, the social and cultural presence of Hindutva as a philosophy, has made matters far more complicated.  The RSS-ized intelligence could be felt behind the organized attacks, the use of social media and such, making us feel, as if Telinipara is sitting on a time-bomb.

4) The role of the two BJP MLAs in the regions, situated on the two banks of the river Ganga, is clear beyond any suspicion. Yet, no legal steps have been taken against them. As for the accused TMC councilor, the party has not even called for an internal inquiry, rest aside anything else. No use of the laws against cyber-crimes related to hate speech on social media has been deployed. However, internet was disconnected for a fortnight in the area.

5) It is beyond any doubt that the administration allowed this ‘riot’ to happen. Riots have become necessary before the 2021 election, for the purpose of communal polarization. And this is the nature of the present we are living through.

6) For the last four years, the two banks of the Hooghly river (and the rest of the state) are experiencing an increasing number of religious celebrations and pujas under governmental patronage. These large scale, extremely glittery celebrations reveal the other face of the revival of a political and politicized religion. In an area, inhabited by a mixed, diverse crowd, the communities are indeed engaged in a bizarre sort of competition. It is as if, all the gunpowder has already been gathered. Just one matchstick would do the final worl.

7) The Hindi belt begins in the west of West Bengal and ends in Rajasthan. Hindutva has almost entirely polarized the society living in this immense area. In the east lies Bangladesh – the polarization project of the Shariyati Islam is almost complete there as well. Thus, West Bengal has increasingly become dotted with signs of polarization. If the society is thus won over by political and politicized religious philosophies, the battle for a more secular and democratic society might be as good as lost.