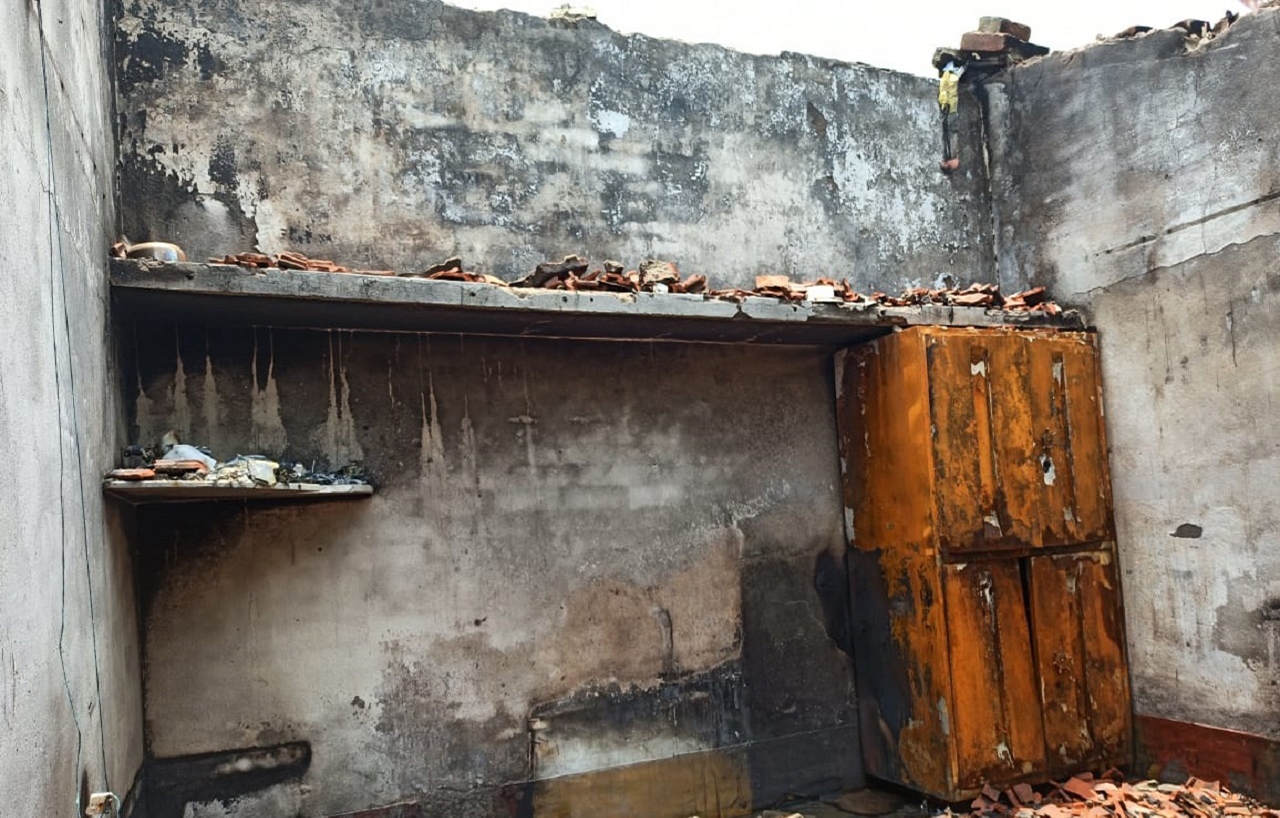 The communal violence in Telinipara in Hooghly district of West Bengal occurred amidst the raging pandemic during the lockdown in early May 2020. Everyone knows there was unrest, conflict and communal violence. But what actually happened in Telinipara? What triggered the violence and what are its immediate and far-reaching effects? This is the second report by Aamra— a study group on Conflict and Coexistence, of their post-RamNavami riots in West Bengal. The English version of the first report on Bhatpara was published in GroundXero in six parts. We are now publishing the full report on conflict and violence in Telinipara in parts. This is the second part of the fact finding report.

Fire of hatred and the ashes left behind

On September 4, 2020, a letter was sent to the Hooghly district magistrate, on behalf of ‘Aamra‘, asking the administration among other things how many houses had been demolished, how many houses had been set on fire, how many families had been looted in the communal conflicts. No reply has come so far. In the course of our investigation, the joint team of Aamra and local friends have repeatedly faced the fire of communal hatred and the ashes left behind by the violence in its aftermath. Here are a few fragments.

The vandalised mazar of SatyaPir

Satya Pir or Satyanarayana worship is one of the popular folk beliefs and practices originating from Bengal that symbolizes syncretism of Hindu and Muslim religions and cultures. Both Hindus and Muslims gathering at Satyapir’s mazar at different places, offering Shinni (a typical prashad made during SatyaNarayan Puja) and taking vows still carry the syncretic tradition of coexistence. We know that this tradition can be seen in different parts of the Indian subcontinent. Khadem (caretakers of a mazar, serving as custodians of the mazar) earn their livelihood from fairs held during annual Urus (the death anniversary of the Pir or the Sufi saint) that take place around such mazars. The common people go to the mazar of the Pir with the belief that they will get cure from diseases, get to solve family or social problems, and the Khadem earns by selling them tabeez or maduli (amulet), jol pora (holy water), etc.  Qawwali and Fakiri songs are performed at the mazar. The SatyaPir Thaan at Bhadreswar on GT Road is one such mazar. Due to the cosmopolitan character of the area, there are plenty of Urdu, Hindi, Oriya, Telugu and Bengali speaking people residing here. Satyapir’s mazar became a common revered place of worship for all — Hindus, Muslims and Christians alike. On June 12, 2020, Hindutva rioters attacked the mazar. The structure made of brick-sand-surki was completely destroyed and pulled down. In reality, the symbol of religious and cultural coexistence was destroyed.

Satya Pir’s mazar is located at Babubazar in Telinipara next to GT Road in Bhadreswar. This 200 year old mazar was founded by Haji Badr Uddin Saheb. It was a simple ordinary structure made of mud, not so majestic, till a few decades ago. Local people told us that 30-35 years ago, Radheshyam Ghosh, a local resident, who owns a famous sweet shop at College Street in Kolkata, Dhakeswari Sweets, got ‘Swapnadesh’ (a divine order in dream) and he rebuilt the mazar. His name is written on the gate. He is now old and sick, and can’t visit the shrine.

We talked to different people to understand how much damage the riots on 12th May have done not only to the mazar but also to the social fabric of coexistence. We talked to Abdul Mallick, the present Khadem of the mazar. Before him, his father Sheikh Jumma Mallick was the Khadem and after his death Abdul Mallick continued to look after the mazar. He seemed very excited at the beginning of the conversation. “What is the use of talking about all these things now, what was bound to happen to me has already happened, I am still being harassed” — this was his expression. We tried to understand his excitement, his anxiety. He continued with his daily ‘business’ while talking to us. Capitalizing on the people’s conventional ‘belief’ in the miracle power of the shrine, he was giving ‘amulets’ to some and ‘garlands’ to others. Who was taking them? Common people, from all communities and all languages.

Aamra – Were you present at the shrine when it was being vandalised?

Khadem– I left at twelve o’clock. We arrive at nine in the morning and leave at twelve. I come again at five in the evening and leave at half past seven or eight. In between people come and I ‘dust’ their bodies, offer them ‘holy water’, give jaundice-garland to those who had jaundice. This is the door that they broke down and I have put in a new one (showing us the door while talking).

Aamra – Did you get the news when it was happening?

Khadem- I got the news then. People who live nearby here informed me. Look, your shrine is being vandalized here, your car has been set on fire, everything is being looted and taken away on shoulders.

Khadem: The local people did it. It has nothing to do with faith, it is party politics. My vehicles have been taken to the police station, they are still not returning them. They say there is a police case. I have the blue book, I have all the documents. I just don’t have the vehicle insurance. OK, I didn’t get the insurance, but why isn’t the police returning the vehicles to me? Have I filed a case in anyone’s name? I haven’t filed any police case.

Aamra – Such a religious place was attacked …?

Khadem– They are regretting it now. What is there to regret now? When they could not stop it that day!

Aamra– No one came forward and tried to stop it?

Khadem– No, no one did such a thing. Everyone saved his own life, says we saw it happening. Who will come? There were so many people who came and attacked, if one or two people had tried to stop them, they would have been beaten up. If I was present that day, they would have even killed me. Can anyone stop them? Now many things can be said or maintain silence. Everyone knows who did it.

Aamra – You are blaming politics. But it didn’t happen so long, why now?

Khadem – As I said for politics. There was politics before, but it wasn’t like this.

Aamra – Do you think people can live together again? Again everyone will come to this mazar, to Uras?

Khadim: Yes, they will come.

Aamra – How old is this mazar?

Aamra – Have you received any money for its reconstruction? What damage has been done to the mazar?

Khadem – I went to the municipality. They are saying that we are giving eight to some, ten to some. So many have lost so much. I told them that if I am given ten, I will not take it, it will do nothing for me. Then the vice chairman called me and gave me twenty thousand rupees. So I was able to buy this beam. I have rebuilt the front wall. But it is not possible for me alone to do this renovation of the mazar. All the money I had inside the iron cabinet was looted. The cabinet was broken.  Nothing inside the cabinet was left. See this is the picture of the cabinet. Inside the box there were brass items, there were copper scales and weights. Inside the mazar there were big flower vases, there were lights made of Belgian glass, they broke everything. They broke the front shutter lock too. See they tried to open the shutter from above. They took away everything that was inside. They couldn’t break the shutter completely. If they had succeeded, more things would have been looted. It’s my son’s shop. His name is Sheikh Abdul Mallick. Everything inside the house was taken outside and set on fire. Took away all the tables and chairs.

Aamra – When is the Urus here?

Khadem – On second Saturday in the month of Falgun. People from both the two communities come. Hindus come more in number. 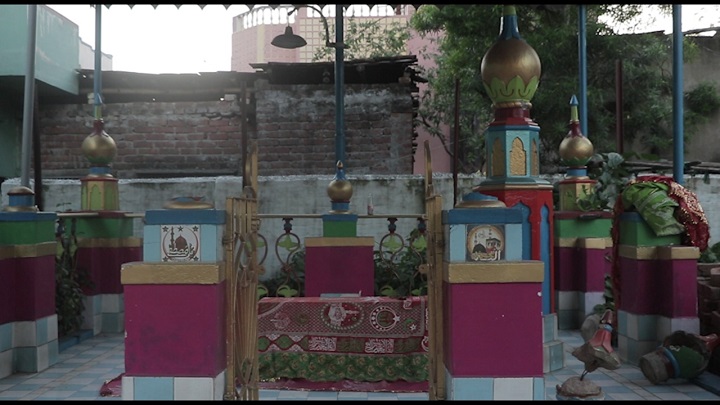 In front of the broken temple

A temple in the Rajabazar area adjacent to the Victoria Jute Mill was vandalized. Several local Hindu families expressed outrage over allegedly putting underwear on the idol. On June 16, 2020, during our fact finding, the families took our team members to the temple site and showed the signs of damage. Standing beside a few completely burnt down houses, a woman from a Jaiswal family demanded adequate compensation for the damaged temple also. The temple was reportedly attacked on May 10. When asked if anyone had been arrested in connection with this incident, the woman said, “No, no arrests have been made.” We couldn’t talk to her any further on this matter.

Read Part 3: Face to Face with Tears and Sufferings