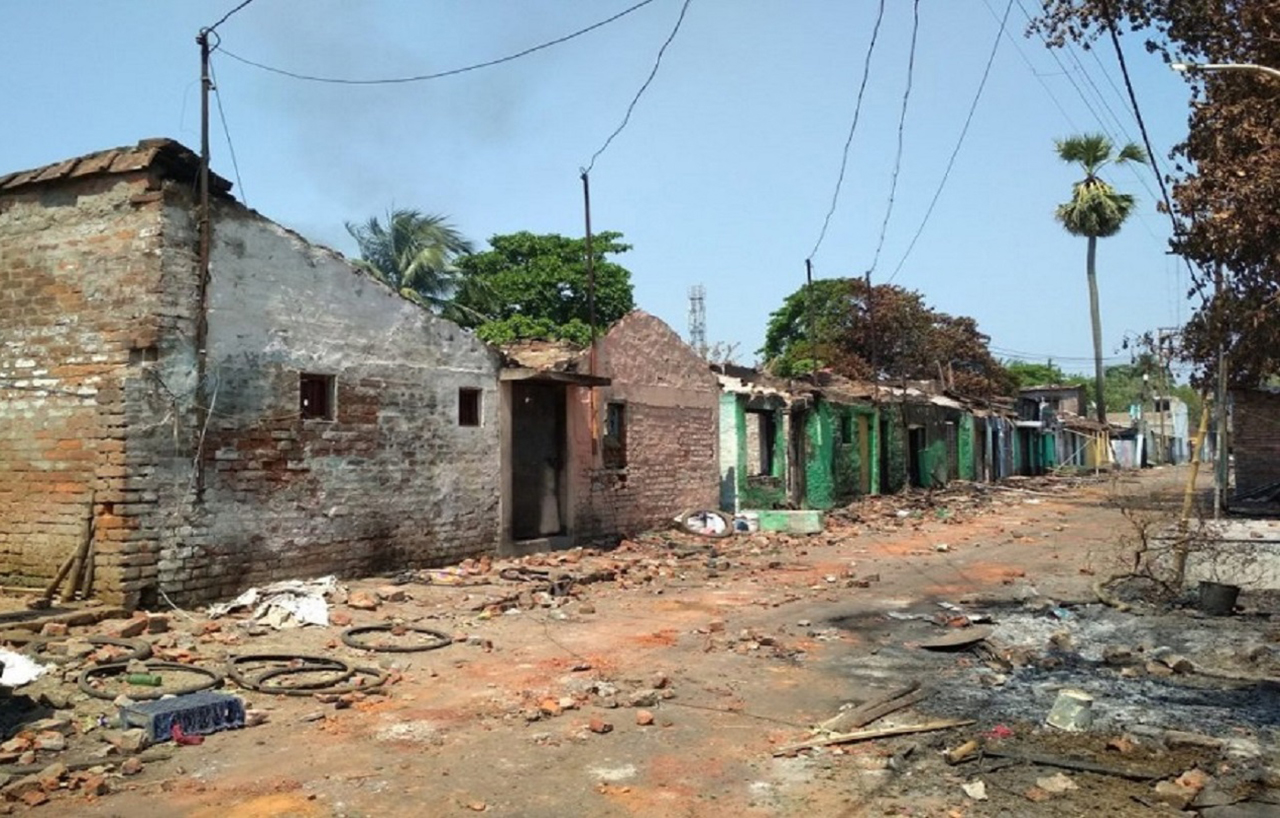 The communal violence in Telinipara in Hooghly district of West Bengal occurred amidst the raging pandemic during the lockdown in early May 2020. Everyone knows there was unrest, conflict and communal violence. But what actually happened in Telinipara? What triggered the violence and what are its immediate and far-reaching effects? This is the second report by Aamra— a study group on Conflict and Coexistence, of their post-RamNavami riots in West Bengal. The English version of the first report on Bhatpara was published in GroundXero in six parts. We are now publishing the full report on conflict and violence in Telinipara in parts. This is the fourth part of the fact finding report.

Telenipara and Gondalpara are two adjacent towns. This Hindi medium school is in Gondalpara. The riot affected Hindus took shelter here. In all, 25 families took shelter in this school. On 3rd June, our team reached this shelter camp at around 11am in the morning. A few women were present in the camp. The others were at home. The men were at home because houses damaged in the riot were being repaired by the Municipality. We met Pannalal Shaw, 13 no. ward commissioner belonging to BJP. He told us that houses are being repaired by fund provided by the municipality and the State Government is providing relief to the camp. He also told us that the State Government will not run this camp for long. When we asked him the reason for this was that he gave a meaningful smile but didn’t say anything.

The riot victims from Muslim Para, Kali Mandir etc. came here. Savitri Devi, a resident of Muslim Para, said, “I saved my life by coming to this school. Otherwise I don’t know what the Muslims would have done to us?”

Aamraa – Did this happen suddenly or you had some inkling of trouble beforehand?

Savitri – No, my son. Things like this have never happened here before.

Aamraa – Why did it happen?

Savitri – They want to drive us away.

Savitri – Many of us live in rented houses. They can keep Muslim tenants if they can drove us away or…

Savitri – They can build big buildings.

Women members of our fact finding team talked separately with the women in this camp and later with the women at Fayez Ahmed Fayez Urdu High School camp. The riot affected women in both the camps talked about problems regarding undergarments, sanitary napkins and clothes. On 11 June, our team distributed those things among women in both the camps. Play toys were distributed among the children in the camps.

The riot affected Muslim families took shelter at the Fayez Ahmed Fayez Urdu High School. On 3 June, 2020, we met them for the first time. We talked to the riot victims inside a classroom in the school. We didn’t ask everybody’s name. The names of only those persons who willingly gave their names and consented to their names being published in the report are disclosed in the report. Others have been termed as “a person” in the transcription of the conversation we had with them.

Selim Khan – I work at Gondalpara Jute mill. The mill is closed for two years. There are about 350 people in this camp. Sixty one families from Gondalpara Gor area, twelve families from the Nehru School area, there are families from FG Street and Aagoatala. The maximum persons are from the Gondalpara Gor area, more than 250. All our houses have been burnt. The government gave us shelter in this camp, so we are here. Our only appeal to the government is to rebuild our homes. Except our lives, everything else belonging to us has been burnt into ashes.

Aamraa – When did you arrive at the camp?

Aamraa – When did the incident occur?

Aamraa – Tell us what happened then?

Selim Khan – Everything happened suddenly. It started on 10th June. Around 8 at night, bricks and stones were thrown at the junction. We were all at home. It was Ramjan time. We were offering namaz inside our homes. Suddenly we saw bombs being hurled, bricks and stones being thrown. We were taken aback. People were running. But there was peace after that. Nothing happened on 11th June. Those who had ran away returned back to their homes. Then, on 12th June, the trouble started again at 12.30 am. We were surrounded from four sides, and bombs, bricks and stones were thrown on our houses. We had nothing in our hands … we are never involved in any fights… it’s on record. You can go and ask anybody, we are not that sort of person who creates trouble. They were bombing from all sides. Thousands of them had gathered at the factory ground armed with bombs and pistols. We ran away from homes and came to his side. After we vacated the houses, they sprinkled petrol and set everything on fire. Nothing survived.

Aamraa – For how long this went on?

Selim Khan – This loot and arson continued for eight hours in the entire Telinipara area. The police and the administration didn’t come.

Aamraa – You obviously did phoned the administration seeking help?

Everybody in unison – We made a lot of telephone calls. People from all places ringed them, pleading them to come and stop the arson. But they didn’t come.

Aamraa – Why didn’t they come? What did the Police say?

Selim Khan – The police kept saying we are coming, we are coming. They arrived after about 4 hours. Things came under control after that.

Ali – Arjun Singh, the BJP MP from Barrackpore, was seen in our Hooghly district. He along with Locket Chatterjee (the local BJP MP) infiltrated many outside persons in our area. None can do this apart from Arjun Singh. Only one or two persons were local, rest all were outsiders. All totally new faces. We can’t recognise them. We informed the police a number of times. They didn’t come. Maybe, the police couldn’t control the situation. It was only after the force arrived at 4 pm, the violence came under control.

Aamraa – Are you and your family living at this school now?

Ali – Yes, I am staying here. My house too is in the Gondolpara Gor area.

A Person (unwilling to disclose his name) – We all have come here from the same para (locality). All our homes have been burnt. Where will we live! The DM and a few organisations have set up this relief camp.

Aamraa – Is the government meeting the expenses for this camp?

Aamraa – By government we mean the local administration, the municipality…

Selim Khan – The municipality is bearing the expenses. We are being provided meals, twice a day, by the municipality. It is being done on the order of the DM sahib.

Aamraa – Where will we get the list of exact numbers of people who are living here?

Selim Khan – There is a list. You can get it from the school authorities.

Aamraa – Telinipara or nearby Chapdani has witnessed communal tension and violence many times in the past. We want to know from all of you how is the violence this time different from the earlier ones?

Selim Khan – There are a lot of differences. We had never imagined that such incidents would happen so suddenly. We are all busy with our work.  We were offering namaz or doing something else. All people are inside their homes in the lockdown. All of a sudden! How did it happen, none of us can imagine. They burnt all our houses. The violence of this intensity has never happened here earlier.

A person – All documents of our boys and girls have been burnt. I passed Madhyamik in 1990 and Higher Secondary in 1993. All my documents along with my house are burnt. Nothing has survived.

Aamraa – Have you informed the administration about those damages? Have they started working on this?

Selim Khan – The work had started. It went on for 10-12 days. Now it has stopped. It seems something has happened at the municipality.  We are unable to understand anything.

Aamraa – Do you have your own houses? Or do most of you live in rented houses?

Selim Khan – All have their own houses. There are few tenants. Few of us work in Gondolpara Jute mill and few at Telinipara Jute mill. Most of us live beside the Gor.

Ali – A few works outside.

Aamraa – What do you apprehend? Is this violence temporary or it can reoccur?

A person – We are very scared. We don’t know what will happen when. We are terrified.

There are two Urdu medium primary schools here, one for boys and the other for girls, named after social reformer Haji Mohammed Mohsin, The women and children had taken shelter at the girl’s school and the men at the boy’s school. When we went there on 10th and 17th June, most of the men had already returned to their homes. We talked with the women at the girl’s school. At that time, construction work was going on in the school. There was sand and cement everywhere. The women and children were amidst them. It was unhygienic.

Halima Bibi (name changed), aged 35 with a few children, was present in a room on the 2nd floor of the school. Food was being cooked there. She shared her experience with us.

Halima – Suddenly, they (the Hindus) attacked our para (neighbourhood)

Halima – (asking the date from her husband standing beside her) 12 May, during evening time.

Halima – A group came with swords in their hands. In our line (lane).

Aamraa – Where is that place?

Halima – 9 No. Line. They also attacked 10 No line. Sounds of screaming and shouting. Then bombs were thrown.

Aamraa – Your kids (looking towards them) Where were they at that time?

Halima – They were at home. Faring death we were all inside our house. At night we came to this camp. Even today, the kids are living in fear.

Aamraa – The scars of violence stays in the minds of children. What are you doing to make them forget that day?

Halima’s husband – Even we can’t forget. How will we make them forget!

Read Part 5: Those Who Set the Fire