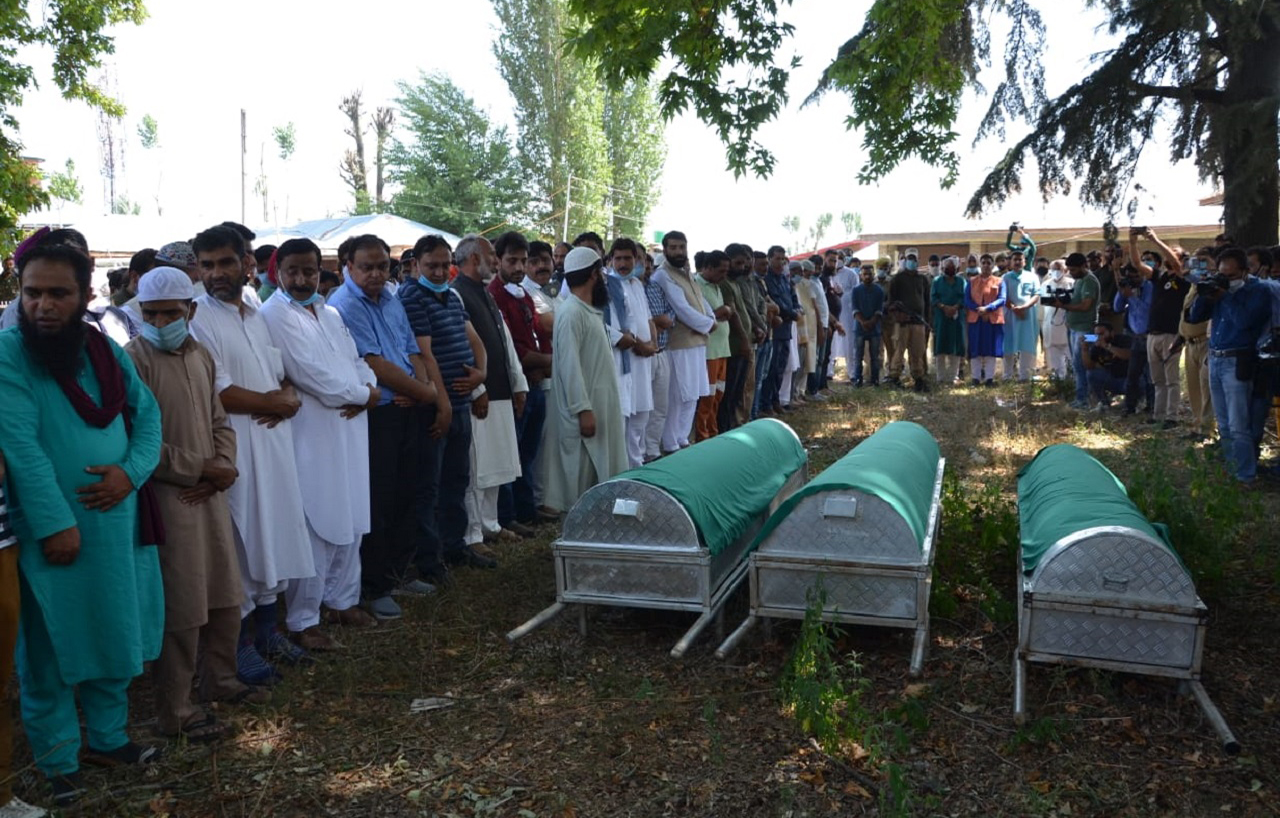 On July 8, around 9 PM, Sheikh Waseem Bari, his father and his brother were killed in a suspected militant attack in Bandipora district of Kashmir, about 60 km north of Srinagar. Younis Ahmad, a local journalist visited his house and spoke to his family and people around.

The three dead bodies of BJP leader Sheikh Waseem Bari, his father’s and his brother’s, were brought down the concrete stairs carefully one after the other on July 9 afternoon, amid religious chants and crying, into a tent pitched on an empty space outside his house in Bandipora district, about 60 km north of Srinagar. Three coffins lay waiting on a side. Wrapped with white clothes, the bodies were kept alongside each other on mattresses, one of which had blood stains on it. Nearby, barely a few meters away, some men inside a tarpaulin-covered area were busy with last-minute preparations before the bodies would be given a final bath each. Until then, people and media personnel made a thick circle looking at the bodies for one last time. BJP leaders, Altaf Thakur and Ravinder Raina, along with a few other men sat beside the bodies, silent with their heads down.

Calling Waseem a ‘tiger’, Raina, who is J&K BJP President, blamed Pakistan for the killings and said that Pakistan cannot stomach the party’s popularity in the Valley.

Since the abrogation of Article 370 in August last year, Pakistan’s Prime Minister Imran Khan has on various platforms, increasingly lashed out at the BJP-led government at the centre, and called it “fascist” and “Hindu Supremacist”. He also accused India of changing the demography of Kashmir by issuing domicile certificates to Indian nationals who are not the permanent residents of the union territory.  Sheikh Waseem Bari’s death, thus, needs to be seen as another manifestation of the complicated and precarious political formations in the Valley that have developed over the last seven decades. The questions that Sheikh Waseem Bari’s death raises, cannot have any easy answers.

The bunker-looking structure at the mouth of the alley that leads to Sheikh Waseem Bari’s home had some cops from J and K police inside. But on July 8 late evening, around 9 PM, when militants attacked from close range and killed Bari, his father Bashir Ahmad and his brother Umer inside a shop his father ran, eight of the ten PSOs who were present at Bari’s house at the moment and tasked with protecting him and his family were all upstairs in their rooms. There was no retaliation and the two militants, one of whom the Kashmir IGP Vijay Kumar said was a Pakistani and belonged to Lashker-e-toiba and another a local militant, managed to escape. Interestingly, Bandipora Police station and a CRPF camp are just at a stone’s throw from where the killings took place. Kumar termed the attack as pre-planned, and said that all the PSOs have been suspended and arrested for their negligence.

Had just returned from a visit to his in-laws

Moments before his killing, Waseem had returned from a visit to his in-laws.  As soon as he arrived home, he wanted to meet his father and brother downstairs in the shop. “Waseem And I had just returned from my parent’s home, and Umer and daddy,” referring to her brother-in-law and father-in-law respectively, “were in the shop,” said Falaq, wife of Waseem, to this reporter and one more who were given access to speak to the family. She was barely audible as her throat didn’t support her after continuous crying. “He locked the door from outside fearing a cat may barge in and harm our 2-month-old son, and then I heard 6-7 gunshots. It was a PSO who opened the door for me. Downstairs, I found Umer and his father lying on the ground as if in an embrace and Waseem just nearby,” Falaq added.

Earlier, before the funeral, when Ravinder Raina entered Waseem’s house to pay his condolences to his wife and sister, Falaq, surrounded by other women, asked him as to why the attack couldn’t be prevented.

“They shot indiscriminately at the three. Where were the PSOs? Why didn’t they retaliate?” Falaq asked Raina, as soon as he entered the room full of women.

In the next room, Waseem’s sister Gousia, who is married, but has been staying at her father’s home after an accident some time ago, in which her mother died and she was badly injured,and from which she has not yet fully recovered, lay face down, occasionally changing her posture and opening eyes. She couldn’t speak a word and stared blankly when her aunt and other women tried to awake her. She closed her eyes again and rested her head on the shoulder of a woman sitting next to her.

Waseem, said to be in his thirties, was BJP’s Kashmir programme coordinator and former district president (Bandipora). He is survived by his wife, his 2-month-old son, a daughter who is 17 months old, and his sister Gousia. Some of the people who this reporter spoke to, said that baring his infant son, there is no male left in the immediate family.

The attack has been widely condemned both inside and as well outside Kashmir. According to a tweet by Union Minister of State in Prime Minister’s Office (PMO) Dr Jitendra Singh, Prime Minister Narendra Modi enquired about the killing of Waseem over the phone and extended his condolences to the family.

Omar Abdullah, Vice President Jammu and Kashmir National Conference and former chief minister of the erstwhile state, in a tweet said, “Sorry to hear about the murderous terror attack on the BJP functionaries and their father in Bandipore earlier this evening. I condemn the attack. My condolences to their families in this time of grief. Sadly the violent targeting of mainstream political workers continues unabated”.

It is pertinent to mention here that in a similar attack on June 8 this year, a 40-year-old Kashmiri Pandit sarpanch Ajay Pandita was shot dead in south Kashmir’s Anantnag district. He was affiliated with the Congress.

Younis Ahmad is a journalist and writer based in Kashmir.