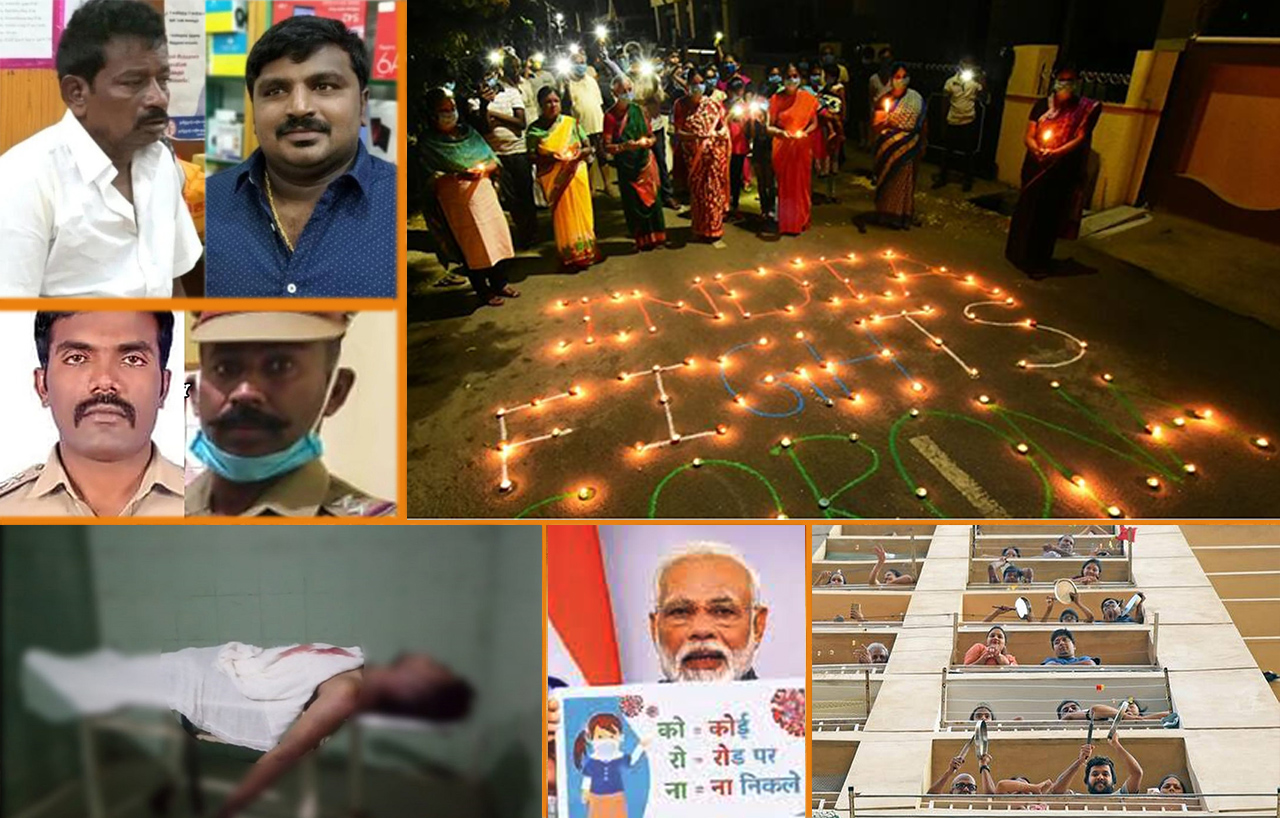 About Thoothukudi and Other Custodial Police Violence During Lockdown: Part 3

A documentation of the custodial deaths during lockdown that also looks for the answer to some such questions around the class nature, caste nature and religious nature of such deaths. This is the third part of the Groundxero report.

The Thoothukudi murders have once again drawn our attention to custodial and other forms of violence perpetrated by the police. Although India is currently facing a public health crisis, the police have been used during this period for playing the roles of admonisher, abuser, torturer, and murderer instead of a guide that helps coordinate medical aid and other forms of relief. Although few expected otherwise, perhaps some of us have been waking up to the fact that the naked violence and apathy of the Indian administration for its citizens is not necessarily reserved for the military zones of Kashmir and the forests of Chhattisgarh and Manipur, or even the minority ghettos, that is, for the others. The deceased in Thoothukudi are after all not so different from us – the middle class Hindu. Although they are Christians, the identity of Jayaraj’s family was strongly rooted in a powerful land-owning caste. Also, unlike the migrant workers – a wide range of socio-economic-cultural-religious groups that have been artificially clubbed together into a large, faceless category during the lockdown – Jayaraj and Bennicks belonged to an established class of traders. Had it not been the case, would their deaths have prompted widespread media coverage and social media outrage? This article is a documentation of the custodial deaths during lockdown that also looks for the answer to some such questions. For the purpose we also reread some works by K. Balagopal, the late civil rights activist, who has written extensively on the subject of police and torture.

Part 1 : A trail of habitual and systematic atrocities by the Thoothukudi cops

Part 2 : Thoothukudi murders in the light of the general lockdown scenario

Subservience of a section of the upper/middle class to the State: Unsurprisingly, a section of the higher strata in the Indian society (for whom the police exists to save it from the working class and government and the army exist to save it from Pakistan, and now, China) defended the actions of the police during lockdown on social media – “What else can police really do? People just don’t listen!” Such arguments often flow towards what one might call the Siachen Syndrome, or in other words, heatedly pointing out that the government and the police do us a great favour by doing their job. This façade of righteousness and law-abiding subservience, however, naturally falls apart when the inconveniences strike closer to home.

Nevertheless, once again we, a section of the same socio-economic class, react to certain deaths – such as Floyd’s or Jayaraj’s and Bennicks’ or others’ – to the point of demanding justice for the dead at least on social media. Such deaths appeal to our hearts, our inner sense of justice. The contradiction arises when we recognize that “true” justice for the dead effectively means justice for living, and moreover, those sacred rights of the living are likely to come only at the cost of what we have learned to identify as our own right to consumption. Just as the rights of workers are directly contradictory to the “right to profit” of our family businesses, the rights of the marginalized ‘police suspects’ to even a fair trial is contradictory to our rights to safety, since who doesn’t know that poverty begets crime! Once we realise this, we learn quickly that it is better to be safe than sorry. These are just some of the ways of thinking that shape the way we react to such incidents.

A few cases of custodial torture/murder of Muslims and Dalits: The J&K Deputy Superintendent Davinder Singh, who gladly boasted about his reputation for custodial torture to the press, got bail during lockdown. The inhuman custodial torture inflicted by Singh and other police officers on Afzal Guru as well as Guru’s mock trial and hanging did not create a social media storm and definitely did not lead to Singh’s arrest, though thankfully, Singh’s proved association with Lashkar-e-Tayyaba and Hizb-ul-Mujahideen did. If horrifying violence is a trigger for our empathy, and our inherent sense of fairness and justice is another, why were the media/social media protests missing then and why are they missing today? Is it because the media did not carry out spectacular descriptions of Guru’s plight? Or is it because we aren’t comfortable raising our voices for the rights of a suspected terrorist? It seems that our mind prioritizes certain atrocious deaths over others. We not only argue with ourselves over whether the tortured or the dead is guilty or not guilty, but also whether he is worth our time and empathy – partially determined by how threatened we feel by his demands for justice.

The question arises not only in the cases of alleged terrorism. A couple of months before the lockdown started, during the anti-CAA protests, a 66 year old Maulana and several minor residents of his orphanage were picked up by the Muzaffarnagar (UP) police as suspected protesters. Despite the allegation being false, the Maulana and the hostel residents were stripped and beaten in the biting cold and several minors were sexually tortured in police custody, just like Jayaraj and Bennicks were. The news barely made it to the media and was fairly ignored by the social media. In another recent case of custodial torture associated to the anti-CAA protest, a young Muslim lawyer was given electric shocks by the UP police while being held in custody, in order to extort fabricated testimonial.

Recently in Rajasthan’s Barmer, a young Dalit scrap shop owner died in police custody. He was the eldest among his siblings, had a wife and a 5 year old child. When his family finally got to see his body, they said, his mouth was wide open, though there wasn’t much blood involved. Till the beginning of March, none of the police officials were punished, though the family got compensated financially and with a job. Then the lockdown began. The news barely made a ripple.

Jayanta Bora, a young Assamese student was picked up by Assam police and Indian Army on 15th June and was brutally killed in police custody. The national media was completely silent about this extra-judicial murder.

Bakul Mian, a Bangladeshi national who came along with two others to India with a valid passport and tourist visa was unable to go back home because of the lockdown. He was subsequently arrested by the police and, despite repeated pleas, was not released. Bakul allegedly died in jail custody in Assam. Neither the Indian government, nor the Indian mainstream media or even social media seemed aware of the incident, let alone interested.

We spoke earlier in this series about the case of the Dalit fisherman Vijayrajan and his young 13 year old brother and cousin being subjected to violent custodial torture. Nobody heard about it.

The reports of the National Crime Records Bureau (NCRB) and various rights groups document custodial torture/deaths of Dalits and Adivasis every year. Young boys and girls and a few middle aged ones – caught for petty theft, drug peddling, prostitution etc.  – are arrested for cases both real and fabricated, and a section of Adivasis, as alleged terrorists as well. Both the mainstream media and social media are silent on these issues. An answer to why this is lies in an article in The Print, where the author discusses the historical silence of the upper caste audience at the massacre of Dalits. Our internal process of deprioritizing most cases of custodial torture/murder comes from that internal sense of justice that we acquire as we grow into our socio-economic position. It would not be too much of an exaggeration to compare this internal sense of justice with the police’s urge to ‘teach a lesson’. Both are products of the social-political-economic forces that shape us; in the former case, it manifests as indifference, while in the latter it manifests as violence and aggression.

It is however far from the truth that we are more accusatory than supportive towards the protests around Floyd or Jayaraj-Bennicks’ deaths. Let us end this section on a positive note. While it is true that millions of cases of atrocity have remained and will remain unaddressed, it is also a useful strategy to escalate certain suitable cases to the point where the resulting campaign benefits the millions who are still alive. The campaigners must be cautious though. In one way it is good that that the Thoothukudi victims have a name and a face, unlike say the migrant workers dying on the road back home or the Dalit youths dying in police custody across the nation. Whether this case is powerful enough to inspire a movement where the name would become a symbol rather than an individual identity remains to be seen.