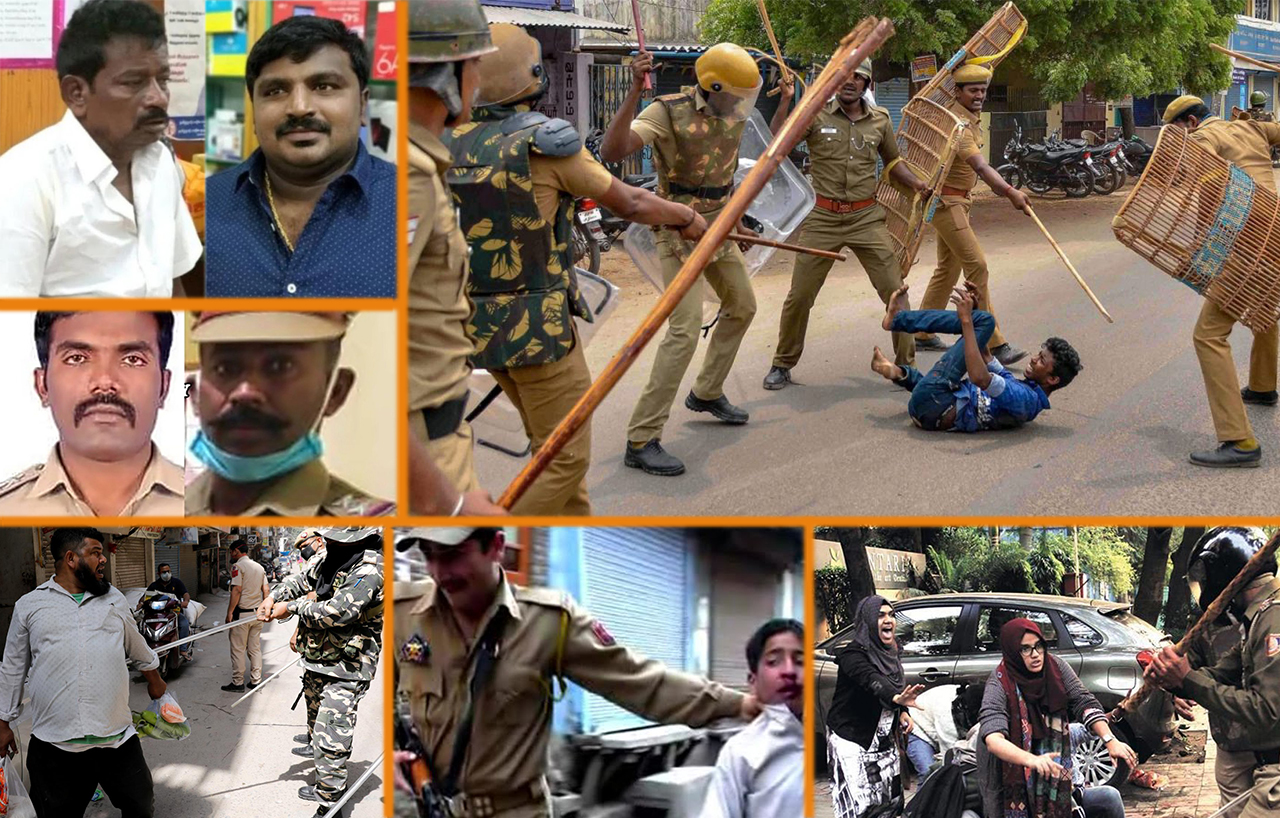 About Thoothukudi and Other Custodial Police Violence During Lockdown: Part 1

A documentation of the custodial deaths during lockdown that also looks for the answer to some such questions around the class nature, caste nature and religious nature of such deaths. This is the first part of the Groundxero report.

The Thoothukudi murders have once again drawn our attention to custodial and other forms of violence perpetrated by the police. Although India is currently facing a public health crisis, the police have been used during this period for playing the roles of admonisher, abuser, torturer, and murderer instead of a guide that helps coordinate medical aid and other forms of relief. Although few expected otherwise, perhaps some of us have been waking up to the fact that the naked violence and apathy of the Indian administration for its citizens is not necessarily reserved for the military zones of Kashmir and the forests of Chhattisgarh and Manipur, or even the minority ghettos, that is, for the others. The deceased in Thoothukudi are after all not so different from us – the middle class Hindu. Although they are Christians, the identity of Jayaraj’s family was strongly rooted in a powerful land-owning caste. Also, unlike the migrant workers – a wide range of socio-economic-cultural-religious groups that have been artificially clubbed together into a large, faceless category during the lockdown – Jayaraj and Bennicks belonged to an established class of traders. Had it not been the case, would their deaths have prompted widespread media coverage and social media outrage? This article is a documentation of the custodial deaths during lockdown that also looks for the answer to some such questions. For the purpose we also reread some works by K. Balagopal, the late civil rights activist, who has written extensively on the subject of police and torture.

1. A trail of habitual and systematic atrocities by the Thoothukudi cops

Murder of Jayaraj and Bennicks: The recent custodial double murder committed by the police in Sathankulam (Thoothukudi, Tamil Nadu) has inspired outrage in the national media, on social media and in civil society, the focus largely being the brutality (including inhuman thrashing and custodial rape) that cannot be justified. The deceased – P. Jayaraj (58) and his son J. Bennicks (31), who ran a mobile accessories shop, were traders from the Christian Nadar community, based in Thoothukudi.

We now know that the primary assailants – sub-inspectors Balakrishnan and Raghuganesh and their superior Inspector Sridhar – are habitual offenders who have so far managed to avoid consequences of their misdoing. However, in this case, the three of them were first suspended and followed by the the transferring of the case to the CBI by the State government after an HC instruction, were arrested under murder charge along with two constables named Muthuraj and Murugan. In the last few days, the absurd version of events (that Jayaraj and Bennicks first abused the police and then rolled on the ground of their own accord, leading to their internal injuries) provided by the police has been busted. CM Palanisami (AIADMK) has stopped trying to pass the deaths off as caused by respiratory illness and cardiac attack, and dilly dallying over whether to call the incident a custodial death or not. Despite the probe by the judicial team led by Kovilpatti JM being disregarded and disrupted by the Sathankulam police, a number of eyewitnesses – both civilians and police officials – have testified to the criminal act. They have even spoken about the presence of five ‘Friends of Police’ in the Sathankulam Station who assisted in the beating as well.  These men were part of Seva Bharathi, an RSS-affiliated group.

The Thoothukudi SP has been replaced and put on a ‘compulsory wait’ and both the ADSP and DSP have been transferred for intimidating the on-duty Kovilpatti JM. A compensation of Rs. 20 lakh has been handed over by the State government to the family of the dead; both the DMK and AIADMK have announced separate compensations of Rs. 25 lakh each on top of that.

This is, however, not the first instance of police brutality, even in recent times.

Murder of Mahendran, assault on Raja Singh and others: Just about a month back, the same Sathankulam officers picked up and tortured 9 others, including a minor, for days, and beat one of them to death in connection with the alleged murder of a police informer. Mahendran (29), the one thrashed to death, was the brother of a ‘suspect’ in the aforementioned murder. Among the rest, Raja Singh is now an important witness in the present case as he was in the same jail as Jayaraj and Bennicks. Allegedly, the same group named Friends of Police – “a Community Policing initiative and a Joint Governmental Organization” that “constitutes the thrust towards humanization and socialization of the police force” – was present at the time of the custodial assault on Raja Singh and others in this case as well.

Assault of 9 Christian pastors: 9 pastors from Rameshwaram and Palaniappuram on a four-day ministry distributing Christian literature were mercilessly beaten by the same two sub-inspectors in February this year after a false complaint of forced conversions was lodged by a local BJP member. Even a man with disabilities wasn’t spared from the thrashing. The National Christian Council moved the DIG of Police through the State Human Rights Commission and Minorities Commission, but at the end the victims were asked to withdraw the complaint in exchange for an apology from the SI. If the SIs were transferred as the Christian group had demanded, Jayaraj and Bennicks may not have died such a horrible death.

Other cases: SI Raghuganesh is infamous for treating people inhumanely when in his custody. SI Balakrishnan, who has been transferred several times for misdoings, has been charged with associating with the sand mafia as well as sexual harassment. Among other known cases, Balakrishnan had once robbed a Thirukkurungudi resident of his bike, stripped him and thrashed him, leading to serious bodily harm, and forced him to give his thumb impression on a blank paper. In this case, Balakrishnan had in the end asked to be forgiven in exchange for an apology, citing that his entire life and career would be at stake if he was convicted. The case was eventually settled outside court – as told by the victim’s advocate.

The criminal brotherhood: The Sathankulam case might look like a villainous act committed by a few stray lower-level police officials – the “bad guys”. We must stop telling ourselves this fairy tale, and look at this incident as an inevitable result of the systematic offence carried out by the government and the police in the name of protecting the country – especially in this moment of crisis. If we are to be outraged, if not actively participate in possible reforms, let us at least be outraged at it in its entirety.

First of all, the Sathankulam murders must be recognized for what it is: one out of millions of cases of custodial crimes, false encounters, illegal transfer of prisoners, deliberate denial of medical care in police / jail custody, and so on, covered up by the department with adequate help from the rest of the administration. It is this ‘brotherhood’ that provides the impunity that the police enjoys:

… what is really remarkable is the ease with which the entire governmental machinery tell lies to defend an ordinary SI of police. Ministers, Superintendents of Police, Executive Magistrates, Doctors and jail officials collude as a matter of course, as if it is the most natural thing to do, to save the skin of a subordinate policeman who has committed murder in his custody. Perhaps it is an instinctive recognition of the fact that it is not really the subordinate policeman who has killed the victim, but the compulsions of the system which cannot survive if it honours its own criminal law—let alone the Constitution purportedly held aloft by it. (Deaths in Police Custody : Some Anatomical Considerations, K. Balagopal, EPW)

Late civil rights activist Balagopal’s words resonate in the Sathankulam case as well. The violently hierarchical Indian administration is an amalgamation of the Hindu ruling-caste/varna authoritarianism demonstrated in the likes of Manusmriti and the colonial authoritarianism taught by the British. So it is not unexpected that this administration would find it convenient to rely on a ‘criminal brotherhood’ in the name of police. Balagopal has pointed out elsewhere that this ‘brotherhood’ was in general “bitterly divided by a rigidly authoritarian regimen of internal discipline, unequal avenues of sycophancy, uneven access to graft, and the consequent jealousy, hatred and mutual suspicion,” and has been trained to come together to help cover up its own misdoings. However, there is no reason to visualize the police force as agency-less, profit-less dancing dolls in the hand of the corporate-politician entente, though perhaps, as individuals some of them indeed are. This would only explain their need to assert power where it is easy and possible to do so.

Secondly, one must recognize the difference between the Sathankulam murders and the murder of George Floyd in the US, which has led to massive civil society uprising and talk of an alternative to the existing police system. While in India too, there is a severe need for rethinking the role of police and judiciary, the Sathankulam case must be looked into with its own nuances of caste and class. Had the characters involved in the incident belonged to a different combination of socio-economic positions, the reactions from civil society could have widely varied.

Thirdly, however hackneyed this may sound, SI Balagopalan and Raghuganesh and Inspector Sridhar are the natural products of a hierarchical punitive system, in which those in the higher ranks are not answerable for harming their subordinates. This rule is applicable for not only the police but all of Indian society. The system is doused in hypermasculine idealization, paranoia, xenophobia and communal and caste discrimination, and is systematically devoid of any significant training in compassion and basic rights – whether in the mainstream schooling of children or the police training. A society that hails the strongest and most prolific killers as ministers would naturally look up to the aura of power to intimidate and violate that the Indian police radiates.

The public outrage: As an instant reaction to the Thoothukudi double murder, the Tamil Nadu Traders’ Association called for a one-day strike. On social media, the incident became viral after Radio Jockey Suchitra read out the details of the death, as a statement against shying away from (and hence negating) the violence as a distant truth. The All India Catholic Union strongly demanded for urgent police reforms. The DMK naturally kept following up closely.

The state’s civil rights groups such as CPDR, NCHRO and People’s Watch published immediate statements condemning the events and demanded a fair investigation. Thoothukudi has had the reputation of being a nightmare in terms of police massacre thanks to the Sterlite case, where the police unleashed by the state-corporate nexus took 13 workers’ lives and left more than a hundred injured through unspeakable violence.

The Tamil Nadu Milk Dealers Welfare Association declared that they would stop delivering milk to the houses of cops. This came also as a natural reaction to the harassment many of the milk delivery persons had faced at the hands of the cops, despite the government allowing milk supply to continue during lockdown. This protest is small but significant as it comes from a group of direct victims of police atrocity, the dimensions of which we, the law-abiding working-from-home upper/middle class cannot really gauge.

This brings us to the subject of severe police atrocity in India – in particular during lockdown – with a focus on which faction of the society the victims mostly come from.

Part 2 : Thoothukudi murders in the light of the general lockdown scenario