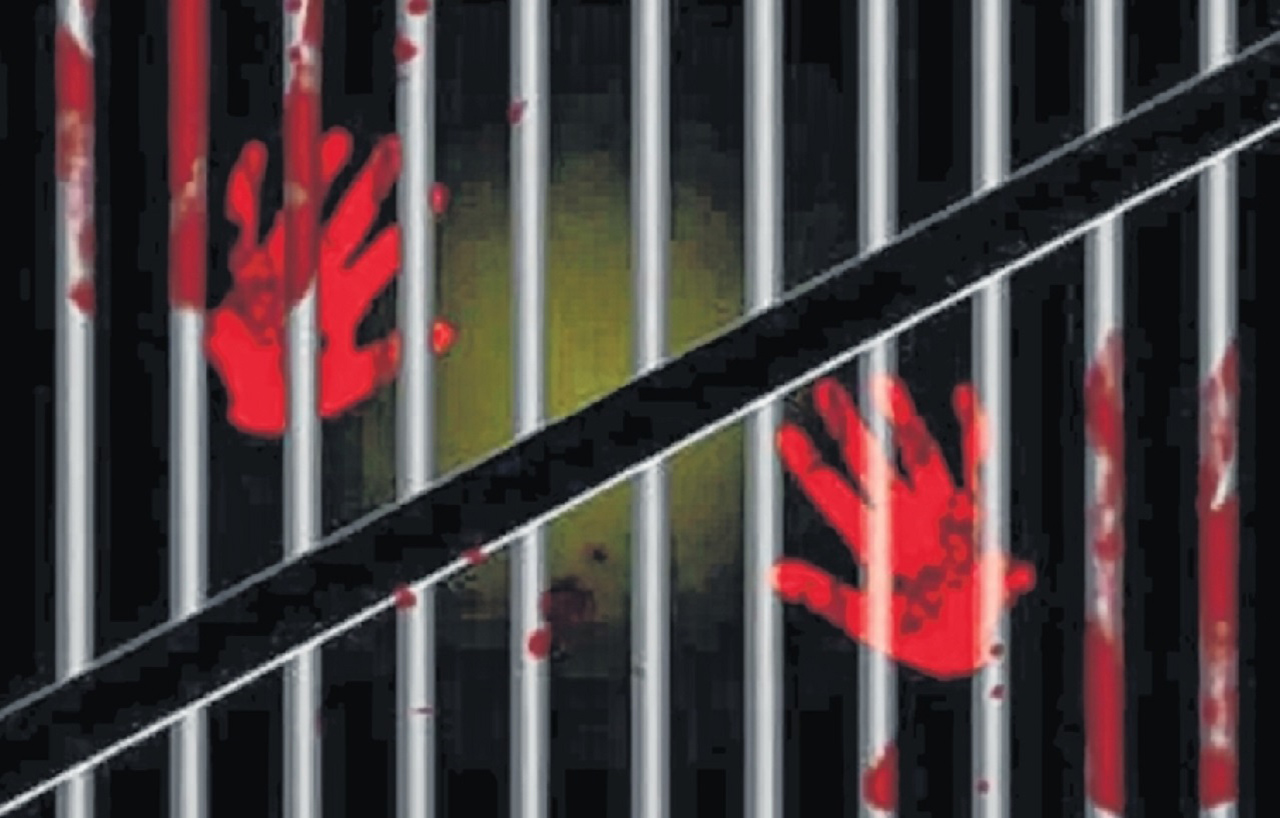 The custodial torture and killing of a shopkeeper and his son, on last Friday, by the police in a small town of Sathankulam in Thoothukudi district of Tamil Nadu, for violating lockdown regulations, has sparked massive outrage all over the state. Condemning this incident, several trader union bodies, various political outfits, activists, and the local people staged protests in various parts of the State demanding immediate arrest and suspension of the police officers responsible for the incident.  Shops and commercial establishments were closed throughout Tamil Nadu on Wednesday (24th June) and Friday (26th June). Different human rights organisations have termed this police brutality as the worst form of state atrocity.

Committee for Protection of Democratic Rights (CPDR) has released a report on this shocking incident of custodial torture and killing of the father-son duo.

“Their cries weren’t heard just by us standing outside, but the entire town.”  – Manimaran, Jayaraj’s Friend

“Imagine, if a man doesn’t even have his front and backside. That is how my brother looked when his friends saw his dead body. … I didn’t have the heart to go inside and see him. My friends saw how he was soaked in blood. And in the end, they just killed them brutally.” Percy, Benniks’ Sister

The incidence and the arrest

Friday, 19th June had begun like any other day for a 31-year old Benniks, a mobile shop owner, in the small town of Sathankulam in Thoothukudi district of Tamil Nadu. Previous night his father, Jayaraj (59-year-old) was pulled up by the local police for keeping the shop open fifteen minutes beyond the stipulated time of 8 pm enforced by the government of Tamil Nadu. The shop was closed immediately, and the matter was thought to be over. Little did Benniks and his father knew that how things will shape later in the day on 19th June!

In the evening of 19th June, at around 7.45 pm, SI. Balakrishnan, along with some policemen, came to Benniks’ shop and a verbal argument had started between Jayaraj and the police leading to the arrest of Jayaraj. Benniks, who was in the shop at that time, questioned the action of the police. At the suggestion of the police, Benniks and some of his friends rushed to the Sathankulam police station.

When Benniks demanded an explanation, he was hit by a policeman, and he could escape the blow due to the timely intervention of his friend. However, his friends were then sent outside the police station where a few lawyers had also gathered. They could hear the beating up of Benniks first and then of Jayaraj, and this ordeal continued till midnight as different police officials took turns to carry out the torture. Later that night, around 10 pm an FIR was filed by SI P Raghuganesh based on the charges made by Head constable S Muthuraj and Constable Murugan. It was mentioned that the father-son duo had kept the shop open till 9:15 pm on 19th June and they had threatened the police from discharging their duties. However, it is evident that the duo was held inside the police station at that time!

Based on the FIR, they were booked under Section 188 (disobedience to order duly promulgated by public servant), 353 (use of force to deter public servant from duty), 269 (negligent act likely to spread infection of disease dangerous to life), and 506(2) (Punishment for criminal intimidation) of the Indian Penal Code.

“When we saw the two, they were dripping with blood and badly hurt. Their clothes were soaked in blood. Then at the hospital, they were questioned by a couple of cops. They didn’t even have the energy to speak up. We had put a blanket on the seat where they were sitting so that they wouldn’t slip away with all the blood.” said Manimaran.

Both Benniks and Jayaraj bled profusely being beaten up mercilessly by the police personnel as well as police volunteers as mentioned by the witnesses. At around 7 am the next day, the duo was taken to the hospital. The bleeding was profuse. Even the police officers asked friends of Benniks and Jayaraj to get new dress as their clothes were visibly soaked with blood. Their blood pressures shot up so high that the two could not be produced in that condition before the Judicial Magistrate for three hours.

When the police produced the father-son duo before D. Saravanan, the Judicial Magistrate, latter gave an automatic remand without caring for mandatory physical fitness of the people produced after being held overnight in police custody. It is alleged that the victims were kept at a distance of 10 feet from the Magistrate, and hence no physical observation was possible. They were sent to Kovilpatti sub-jail, some 100 km away from Santhankulam.

On the night of Monday, 22nd June Benniks died at the Kovilpatti Government Hospital after complaining of chest pain while Jayaraj expired in the wee hours of the following day.

The custodial death of these two men has sparked massive outrage in TamilNadu. A large number of people, including shopkeepers and traders, staged a dharna in Santhankulam. Shops and commercial establishments were closed throughout Tamil Nadu on Wednesday (24th June) and Friday (26th June). Social media is full of detailed descriptions of the torture and condemnation against the killing. Different human rights organisations have termed this brutality as the worst form of state atrocity. Thoothukudi MP Kanimozhi wrote a complaint to the Director-General of Police calling this a serious violation of human rights and demanded stringent action against the policemen.

The Madras High Court has sought a report from the Tamil Nadu police on these double custodial deaths. A Madurai bench of the High Court, comprising Justices P N Prakash and B Pugalendhi, instructed the police to inform the public about the suo-moto cognisance the court has taken of the deaths. The court ordered that the post-mortem of the deceased shall be conducted by a team of three doctors and the post-mortem process has to be video- recorded.

The police are denying the custodial torture. However, understanding the public outrage, Arun Balagopalan, Superintendent, Thoothukudi informed the journalists that the two sub- inspectors and constables were placed under suspension and the Inspector has been transferred to “wait-list”.

Chief Minister Edappadi K Palaniswami issued a statement condoling the deaths. He also announced a solatium of Rs 10 lakh each for Jeyaraj and Benniks. Kanimozhi has given the family a compensation of Rs 25 lakhs. AIADMK has also announced Rs 25 lakh ex-gratia.

Judging from all the information available, CPDR-TN finds this to be one of the most barbaric incidences of torture and custodial death in TamilNadu. Thoothukudi, which has been in the news in recent past (see CDRO’s fact finding report on police atrocities on anti- Sterlite protests in 2018 ), is once more in the news for police excesses. It shows the sad state of affairs there. Even overall, Tamil Nadu is one of the most notorious states in terms of police excesses.

According to ‘India: Annual Report on Torture 2018’, a report published by Asian Centre for Human Rights, the National Human Rights Commission (NHRC) had received reports of 147 custodial deaths in 2018. In 2018, Tamil Nadu topped the list among southern states with 76 custodial deaths.

As pointed out by senior advocate, Sudha Ramalingam, the National Crime Records Bureau (NCRB) data shows that, though judicial enquiries have been conducted for 12 cases in Tamil Nadu, charge-sheets have not been filed in any case, and there have been no arrests made.

This brutal twin murder brings up the question that is the pandemic favouring an acceleration of the transformation of Tamil Nadu into a total police state?

2. A speedy and time-bound trial must be carried out as early signs of district police adopting a delaying tactic, in the name of COVID pandemic, is visible.

3. It is clear that such a barbaric act cannot be the handiwork of only one or two persons. Hence, all police officials present in the police station, including the Inspector, should be immediately arrested.

4. It is alleged that, at the time of beating up, volunteers of Friends of Police organisation were also present inside the police station and had taken part in the torture. Those volunteers who were present inside the police station should be arrested. Further, Friends of Police is an unconstitutional and illegal body which acts as an extended arm of the police. Such an organisation should be disbanded.

5. The medical examination report of the government doctor, who had given fitness certificate to Jayaraj and Benniks before they were produced before the Judicial Magistrate, must be made available to the public.

6. The actions of Sathankulam Judicial Magistrate and Kovilpatti Prison authority need to be probed, and till the verdict is out, they should be put under suspension.