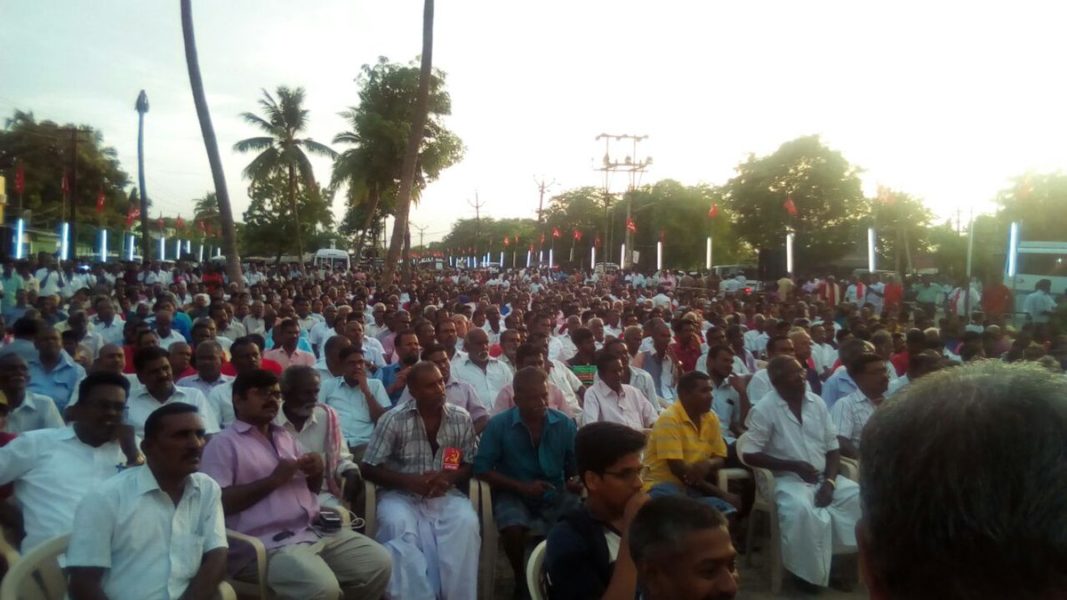 Amidst widening state repression of the struggle in Thoothukudi, Advocate Vanchi Nathan, State Coordinator of People’s Right Protection Centre who also served as the legal advisor to the Committee for the Struggle against Sterlite has been arrested, as have six members of Makkal Athikaram who have been booked under the authoritarian National Security Act. Lois Sofia reports on the public meeting organised by CPI-M, the hurdles put in its way, and the story of the police charging almost 2000 people for simply attending a public meeting.

On June 18, the Communist Party of India (Marxist) held the first public meeting in Thoothukudi since the bloody events on May 22nd, when the police killed and grievously injured scores of people who were protesting Vedanta Ltd’s copper smelting unit, Sterlite Copper. CPI-M leaders Brinda Karat, U. Vasuki, P. Sampath, K.S. Arjunan and Kanagaraj attended the meeting. 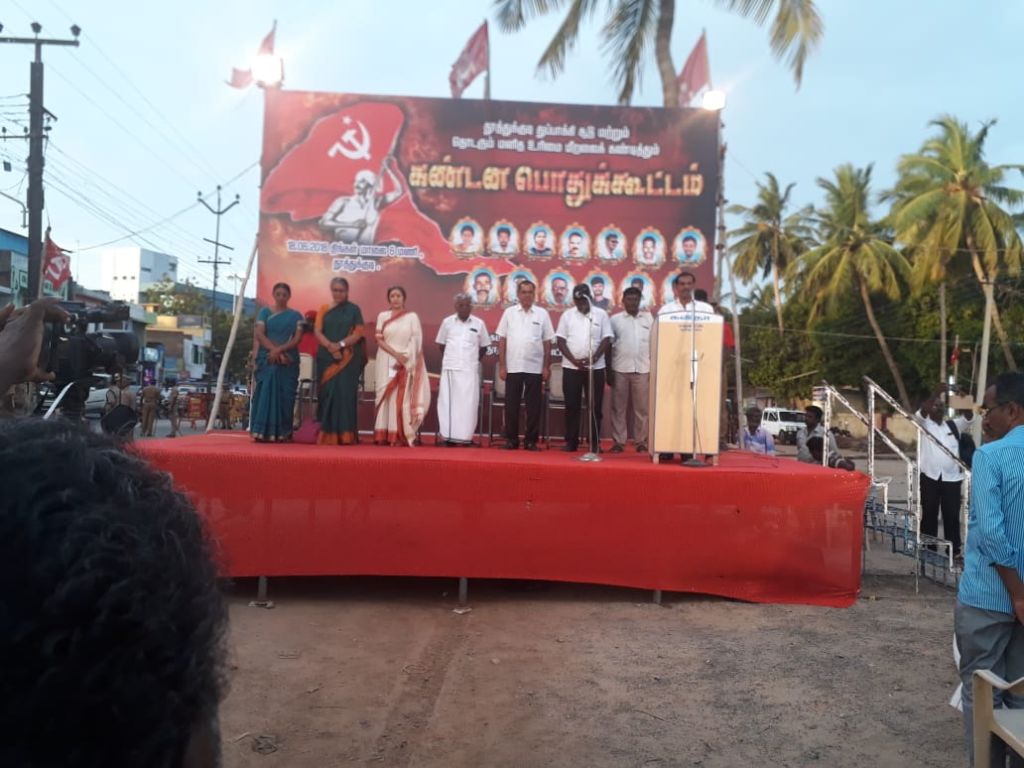 There was heavy police presence and eyewitnesses report that armed police were videographing and surveilling everyone who gathered, including from atop neighbouring buildings. In a brazen effort to block the event, the Tamil Nadu police had rejected permission to hold the meeting on Friday June 15th, late in the evening. Since the event was scheduled for Monday, June 18 and the courts were closed for the weekend, lawyers representing the CPI-M approached judges of the Madurai bench of the Madras High court at their homes to obtain permission. The court granted permission for a meeting, as opposed to a rally, subject to the conditions that not more than 1000 people would attend, that it should be conducted only between 6 and 8 pm, and directed that nobody besides Brinda Karat and U. Vasuki be allowed to speak at the meeting. The police fenced the venue to ensure the crowd was limited to a 1000 people.

When Politburo member of the Communist Party of India (Marxist) Brinda Karat addressed the crowd, she recounted the conversation she had earlier in the day with the grieving daughters of Jhansi, who was shot dead by the police on May 22nd in Therespuram, several kilometers away from the Collectorate where most of the killings occurred. Jhansi’s family and witnesses have said that she was a bystander who was on her way to her daughter’s home with some fish when police killed her. Ms. Karat held the Modi government at the Centre responsible for the horror unleashed in Thoothukudi and the AIADMK government at the state as the secondary culprit, and finally, the local administration and police. She charged the BJP-led NDA government of practising crony capitalism and questioned how it could give the green light for expansion of a plant which had been fined Rs. 100 crores by the Supreme court only a few years ago. She spoke about the political donations Vedanta had made to both the Congress and the BJP in violation of the Foreign Contributions Regulations Act, and how the NDA government retrospectively amended the laws to make them and any future donations legal. 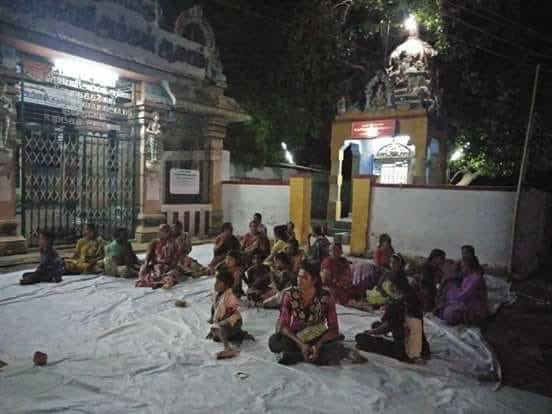 Women in Madathur spending the night in a temple to protect themselves from the police. Source: Twitter

Brinda Karat spoke against the police’s move of charging six men under the draconian National Security Act for protesting against Sterlite. She asked how people who protest a private company’s environmental pollution could be arrested under the NSA. The Modi government, she said, has been misusing this law to stifle criticism of its policies and the Tamil Nadu government is following in the former’s footsteps. She also rebuked the illegal actions and thuggery of the police over the last weeks and commended the lawyers who came together to provide legal assistance to the arrested protesters. She mentioned how women in some villagers have been sleeping in temples to evade the plain clothed policemen who break into their homes, threaten and conduct searches every night.

After the public meeting on Monday night the police filed a complaint claiming that their tally put the number of people who were present to be above 1000. Police from the Thoothukudi South station filed a complaint against 1720 people including CPI-M Thoothukudi district secretary, K.S. Arjunan and 215 women who participated in the meeting under Section 188 of the Indian Penal Code (disobedience to order duly promulgated by public servant). The Tamil Nadu police are engaged in an exercise of squashing dissent all over the state by foisting false cases and arresting environmentalists, student activists, lawyers, farmers and ordinary people (we will be publishing a detailed piece on this shortly). These repressive actions of the police by means of overt surveillance and initiating a case en masse to intimidate people convened at a public meeting to condemn police violence, human rights violations, etc. should be seen in this broader context. K.S. Arjunan approached the Madras high court’s Madurai bench challenging the complaint and the case was heard on June 20th. The court refused to accept the government’s stand that it would close the case and instead ordered the complaint be struck down. The court also clearly observed in its order that a case cannot be made against a public meeting which ended peacefully on the basis of the numbers that were present.