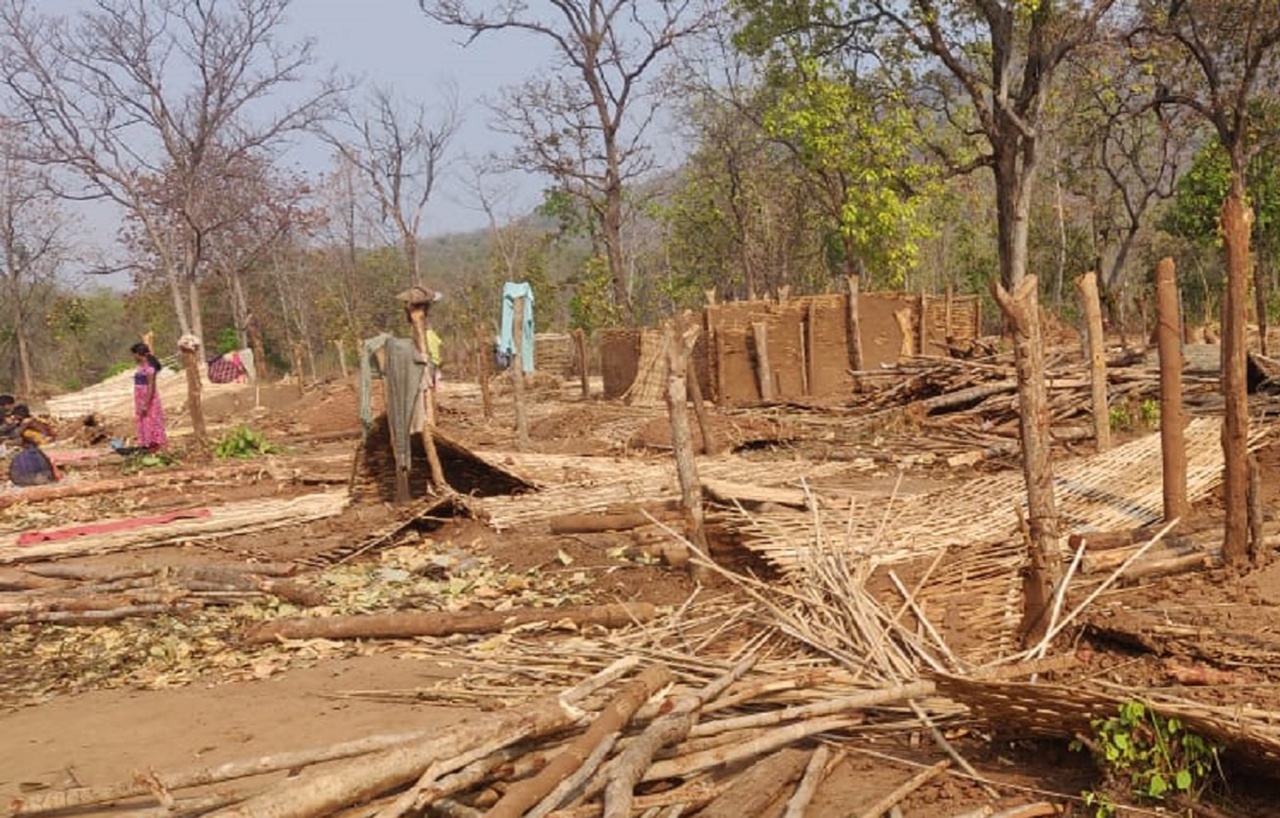 An Adivasi village demolished by the Forest Department in Odisha during the ongoing lockdown, leaves at least 32 families without any shelter, reports Surya Shankar Dash.

The Karlapat Wildlife Sanctuary is located in Odisha and at a distance of about 15 km from Bhawanipatna, the district headquarter. The Khandualmali hill range located in the forest is a major bauxite deposit of Odisha and companies like BHP Billion, L&T, Vedanta, etc. have been trying to obtain mining lease for it. The Adivasi people of the region have organised themselves under the banner of Khandualmali Suraksha Samiti and resisted these attempts by the mining companies. This has also led to widespread repression by the Police who have branded the movement as a Maoist backed insurgency with at least three people having been killed in staged encounters (Nov. 2015).

While on one side the Government of Odisha is extremely proactive in displacing Adivasis from their homeland it is equally apathetic to their needs and requirements. The people of Nehla village have been lobbying with the Forest Department and the District Administration to relocate them ever since landslides in 2017 affected their village located on a hill slope. Every monsoon they lived in great fear of their village being washed away and people getting buried under the mud. Earlier this year they identified a clear land in the plains and built a new village.

On the 24th of April 2020, the Forest Dept. forcefully demolished the village leaving the 32 Adivasi families homeless. The demolition is not only a violation of the COVID19 lockdown it is a grave criminal offence amounting to an atrocity under the SC ST PoA Act. The next morning when legal activist Siddharth Nayak arrived at the location he was manhandled and detained for several hours by the police in an attempt to prevent the villagers from taking legal action.

The adivasi village demolished by the Forest Dept.

“I am absolutely shocked with the way the Forest Dept. personnel behaved with me. They manhandled me, pushed me around, detained me for hours, took away my phone, motorcycle keys, and Aadhar card. A journalist from a TV channel accompanying me was also mistreated and his camera was taken away. They refused to believe me that I am an Advocate. I asked them to verify with their senior officials whom I had met several times along with the same villagers to discuss the matter. I even showed them online reports about the Niyamgiri case where I was a petitioner. But they just refused to listen and continued with their misbehaviour. One can imagine that if they behave like this with me then what would be their attitude towards the Adivasi people. All I was trying to tell the Forest Dept. is that if they would have at least waited till the COVID19 lockdown period was over then the people could have tried to make alternate arrangements. It is really surprising that during a national lockdown period the Forest Dept. is busy demolishing Adivasi villages.”

The only shelter available for the Adivasi villagers are the trees which can hardly protect them from the scorching summer or the heavy Kala Baisakhi rains occurring all over Odisha. It is ironic that the same Forest Dept and District Administration use the most violent and unconstitutional means to evict Adivasis from their ancestral villages when a mining company requires it but do not allow the voluntary relocation of villagers when they are unable to lead a proper life. The people of Nehla faced several problems in the previous location for which they decided to relocate.

The adivasi villagers living in the open under scorching Sun

Sunadhar Majhi, a resident of the village said:

“The Panchayat is far away and difficult to access and moreover it’s a Sanctuary area so we don’t have proper facilities. We have to walk 15 km through the forest to get PDS rice and other provisions. For generations we practiced shifting cultivation but now they say we cannot do it because it’s a Sanctuary. How will we survive? After the landslide we lived in great fear and finally decided to relocate two months ago. Now they are saying we cannot do this. Why? The village was earlier inside the Sanctuary and now also we are within the Sanctuary. We are still within the limits of Sagada Panchayat as before. How can they say we don’t have a right to settle here? We are the traditional custodians of this forest and it belongs to us. Moreover it is not as if we just suddenly decided to do it. For years we have been running from pillar to post, met the Collector, the DFO, etc. How long will we wait for them to fulfill their duties?”

The Adivasis of Odisha living in the Sanctuaries and Parks have always been persecuted by the Forest Dept. which often is hand in glove with the timber mafia, the mining mafia, paper industry, etc. Wherever forests remain in Odisha it is because of the protection from Adivasi communities rather than from the Forest Dept. During a global pandemic and national lockdown the decision of the Forest Department to demolish an entire Adivasi village leaving them without shelter, food and water is not surprising considering that the Odisha Government has been a regime of genocide and ecocide, rather it reminds everyone that the same rulers who orchestrated the massacre of Kalinga Nagar, the mass displacement at Lanjigarh, the devastation of  Sukinda, the pogrom of Kandhamaal, and the plunder of Odisha’s coastline are still in power. The Odisha Government has always been clever to publicize relief work during natural disasters to present a picture of itself as a caring and efficient Government but the reality remains that it will continue to subject its marginalized citizens to utmost brutality.

The author Surya Shankar is a filmmaker-activist from Odisha.