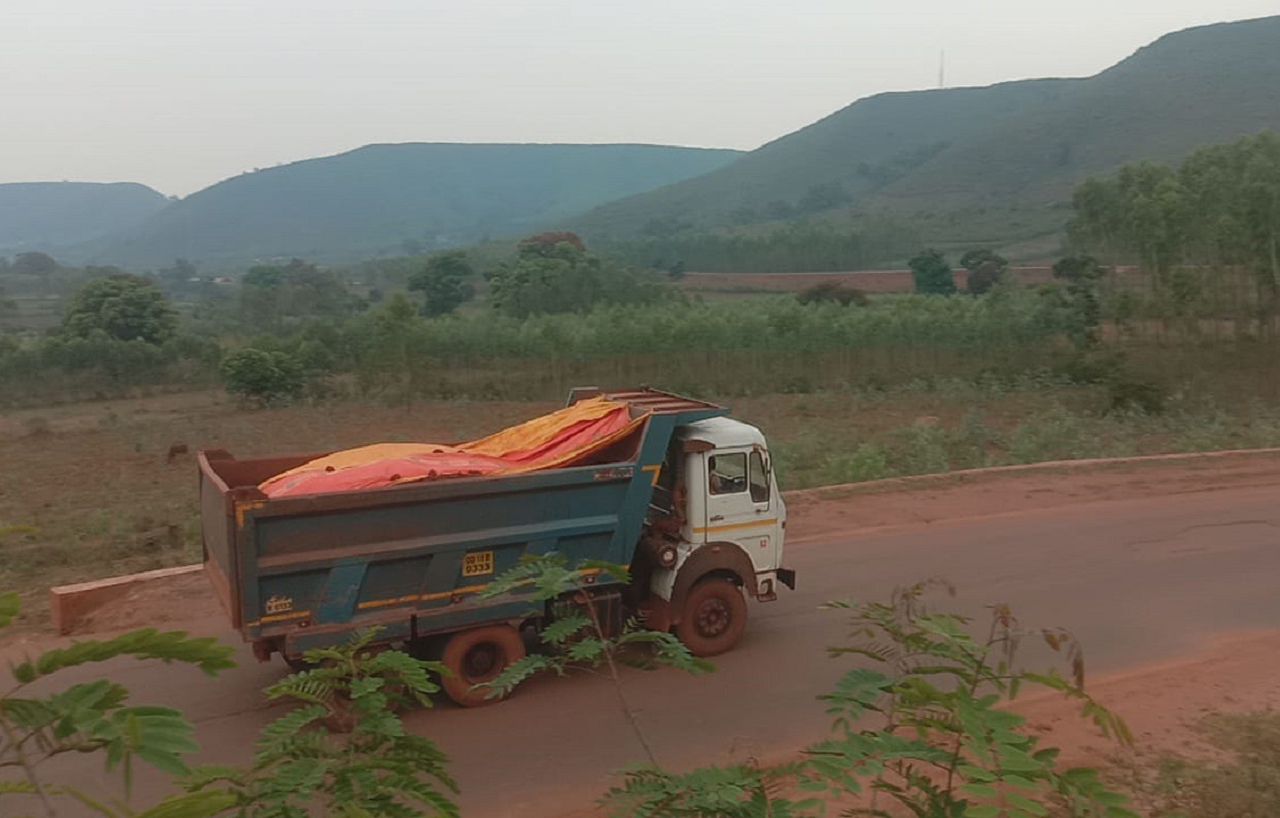 While the COVID-19 virus continues to make its way through the population, infecting larger numbers of individuals every day, the Adivasi Dalit communities of Odisha are at great risk due to the state government’s decision to allow mining activities and continue operations in mineral production factories across Odisha, writes Surya Shankar Dash.

Asurpada, a village located on the Rayagada-Kalahandi district border, is cut by a highway running through it connecting Lanjigarh and Rayagada. Technically a Panchayat road, it is used like a national highway, with hundreds of trucks bound for Vedanta’s refinery in Lanjigarh plying on it everyday. For several years, the villagers have protested against this illegal use of their Panchayat road and the dangers of a highway running through a village. Several accidents have occurred here with children and senior citizens being the most vulnerable. On 12 April, the people of Asurpada staged a road block because the trucks continued to ply during the lockdown.

Padmanabh Chowdhury, a resident of the village, said

“At least 200 trucks carrying bauxite, 50 trucks carrying coal and another 50 trucks carrying other material go on this road everyday. Most of the truckers stop by and use the handpump tubewell of the village and also cook in the adjoining mango orchard. These trucks come from Andhra Pradesh, Maharashtra and other parts of Odisha. Maharashtra is a COVID19 hotspot and that puts our village at great risk. We are told that the virus stays longer on metal surfaces and the hand pumps are metal.  The whole village is at risk and also the children play in the mango orchard. That is why we had to stage a road block.”

The roadblock was lifted the same day after the Police and District Administration promptly swung to action. Residents were abused and threatened with lock-ups if they failed to lift the roadblock immediately.

“The Tahsildar of Muniguda, the SDPO of Muniguda and the IIC of Ambadola Police Station all came here to lift the road blockade because it was affecting Vedanta. They did not come to secure our lives from COVID-19 contamination. Rather they abused us in the filthiest of language,” said Pritibas Hial.

Residents of the village alleged that after removing the road blockade the Tahsildar, the SDPO and the IIC went to Vedanta’s refinery in Lanjigarh and stayed there till the evening. Lanjigarh is outside their area of jurisdiction and in a different district altogether.

All through the period of the Lockdown, the mainstream media has been carrying press releases of Vedanta stating how it has helped lakhs of people in Kalahandi district. On one hand it indicates that the mainstream media has no problem simply publishing press releases from corporates as news stories without verifying the truth, and on the other it is clearly a strategy of Vedanta designed to keep certain facts buried beneath its propaganda. Facts like the Govt. allowing its factories to operate all through the lockdown, and that residents living around its factories suffer from numerous health problems caused by the factories.

In Lanjigarh where Vedanta’s illegally built refinery is located, people of several villages are affected by skin diseases, respiratory disorders, and undiagnosed illnesses. Villagers allege that Vedanta dumps its toxic waste in the Vamsadhara river regularly.

About a hundred kilometers south of Lanjigarh are the Kodingamali hills in Koraput district, where the Orissa Mining Corporation (OMC) carries out bauxite mining that feeds the Lanjigarh refinery. People of Kodingamali have been opposing the mining operations for months now, and last year had disrupted the mining and staged a roadblock for weeks despite rain and intimidation of the mining mafia.  Mining by the OMC continued throughout the lockdown causing great fear amidst the residents of the area with hundreds of trucks transporting bauxite to Lanjigarh.

“While the whole nation is under a lockdown and people are not stepping out of their homes because of the COVID pandemic, OMC is carrying out bauxite mining in Koraput’s Kodingamali for Vedanta. Hundreds of trucks are transporting bauxite from the mines causing great trouble for the local people. On one side Covid has terrified people and on the other OMC’s mining activity for Vedanta is causing widespread pollution. OMC’s contractors are using the lockdown to undertake even more mining than usual. How is it that when even a single bicycle is not permitted on the roads they are allowing hundreds of mining trucks on the highway? They are putting our lives in great danger. Please pressurise the Govt. to suspend mining activity during the lockdown.”

The ongoing lockdown for COVID-19 has also struck a tremendous blow to the agrarian economy and the betel leaf farmers have been one of the worst hit. In Dhinkia Charidesh more than 3,000 families dependent on betel leaf farming are going to lose revenue worth Rs. 30 crore at least, as betel leaves are stuck in the villages due to the lockdown.

Debendra Swain, a resident of Dhinkia who has also been at the forefront of anti-Posco anti-Jindal movement, said:

“Betel leaves are perishable items and with the rising summer heat, stocks worth more than Rs. 30 crore is going to be destroyed in a matter of days. This is just the stock in Dhinkia Chridesh, that has not been able to move along the supply chain, and a much larger stock is stuck if one were to account for the rest of Jagatsinghpur district, and the districts of Puri, Kendrapara, Cuttack, Jajpur, Bhadrak, Balasore, and Ganjam. At least Rs. 10,000 crore worth betel leaves from vineyards spread over more than 2000 ha across Odisha is going to perish in the summer across Odisha if immediate measures are not taken for transportation of the stock.”

“They have imposed a lockdown at the cost of life and livelihood of farmers and workers. Why couldn’t the government prepare for this? Why isn’t the government helping out the farmers and workers? Rather we saw police assaulting fishers at Jatadhara river and betel leaf farmers at Kujang. If they could allow mining and metal factories of private companies they why couldn’t they allow us to save our betel leaf stocks? I fear they want to use the COVID 19 pandemic and lockdown to further suppress our movements against forceful land acquisition, displacement, and environmental devastation.”

A letter from Tata Steel, Kalinga Nagar to the Odisha government dated 21 March 2020, pleads for the plant to remain operational during the lockdown to avoid ‘grave financial losses’ and ‘loss of employment to direct and indirect employees’. The letter seeks permission for at least 50% of its employees to be on duty and that Tata’s buses and vehicles from Bhubaneswar should be allowed as well. The same day the Collector of Jajpur released a letter granting permission to Tata Steel, Jindal Stainless, Visa Steel, IEL, Brahmani River Pellet, and JSW Cement factories in Kalinga Nagar to remain operational.

The Sukinda chromite mines are located about 35 km west of the Kalinga Nagar factories and are notorious for widespread hexavalent chromium contamination, even earning the region a position amongst the ten most polluted places of the world in a list made in 2007 by an American research organization. Hexavalent chromium is a dangerous carcinogen that has contaminated the air, water, and soil of Sukinda. During the lockdown, at least two mines remained operational, run by FACOR and IMFA.

Lambodar Mohanta, an activist from the region, said:

“It was because of the local politician’s support that these mines could remain open. While the companies take the executives by bus the workers have to cycle several kilometres from their villages to the mines. At least four hundred labourers are employed in these two mines and they are afraid they will lose their jobs if they stay home. Already we are suffering terrible diseases from the Chromium hexavalent pollution and now we are being exposed to COVID-19 because of the mining not being discontinued during the lockdown. They have already poisoned the Domsala river which used to be the primary source of water in the region. All claims of CSR and development activities by mining companies are just lies and at most they might have done some activity outside the affected area.”

The Odisha government and mining companies like Tata, Vedanta and OMC have used the COVID-19 pandemic as an opportunity to glorify themselves and suppress the horrific health problems they have created with the corporate sponsored mainstream media drumming up the propaganda blatantly. In all this the voices of the Adivasi Dalit people of Lanjigarh, Kodingamali, Dhinkia, Kalinga Nagar and Sukinda remain suppressed.

The author Surya Shankar is a filmmaker-activist from Odisha.