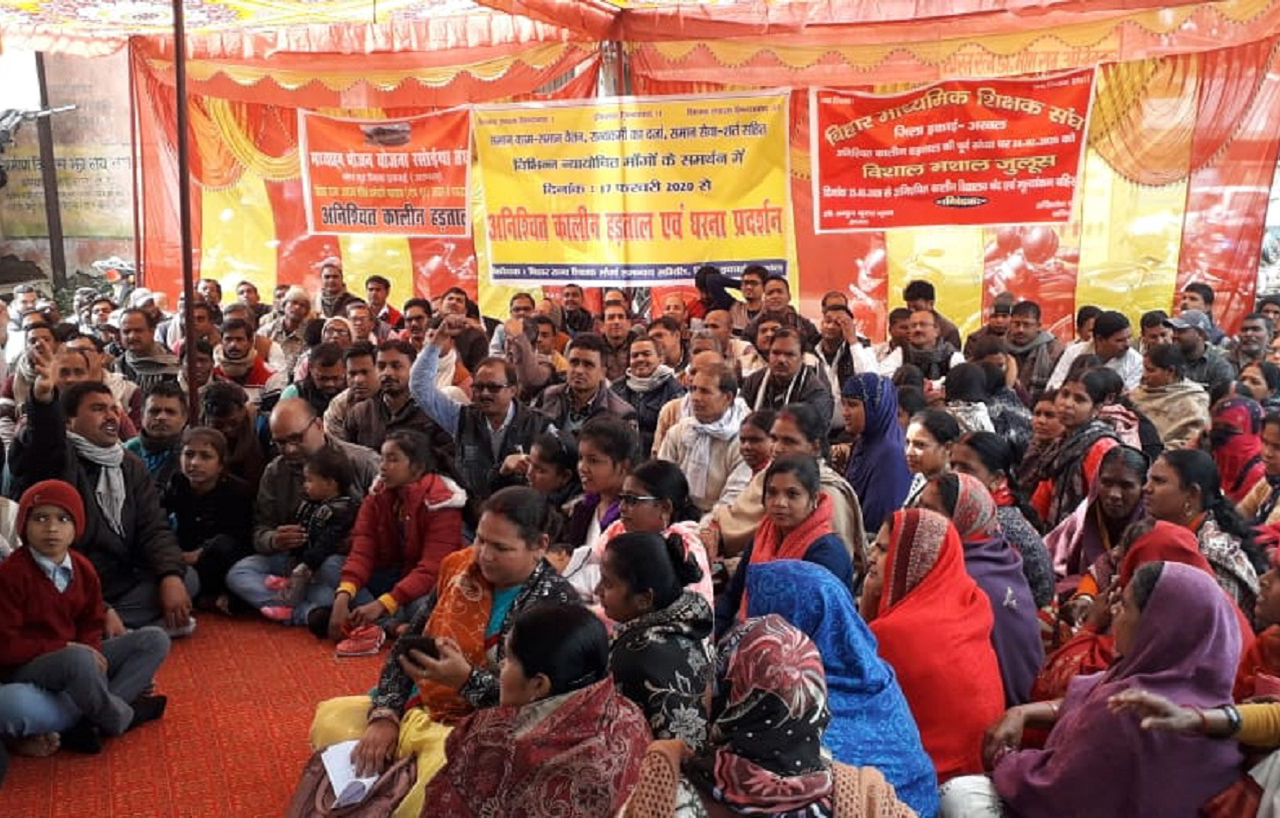 Bihar’s teachers struggle in the time of Corona

Bihar is facing one of the biggest teachers’ strikes in recent decades. Around 4.5 lakh primary and secondary school teachers, regular and Niyojit teachers across Bihar are on the indefinite strike for the last one and half months. Their demands are a dignified pay scale and better service conditions. The Bihar government had promised to implement these demands four years ago but failed to follow through despite repeated requests by various teachers organisations. Finding no other option, the teachers, at last, resorted to indefinite strike, reports Anish Ankur from Patna.

Bihar is facing twin challenges, one on the health front due to the Coronavirus epidemic, and the other on the education front because of the ongoing teachers’ strike. School buildings have been converted into  quarantine centres for those infected with the Coronavirus but despite this, the school teachers are facing suspension, threats and FIRs by the Bihar government. While the Bihar government is giving scholarships to school students for three months, their teachers are not being paid their salary because of their participation in the strike. The state government has issued a letter indicating that the striking teachers should not be paid their salaries during  the strike period. Till now there is only one death due to the Coronavirus but more than two dozen striking teachers have lost their lives during the strike period.

Primary teachers have been on the strike since 17 February while 40,000 secondary teachers joined the strike on 25 February. Following them, 1.25 lakh teachers qualified under the ‘Teachers Ability Test’ (TET) went on strike from 27 February. The ‘Bihar Rajya Shikshak Sanghrash Samiti’ (BRSSS), a joint forum of  28 primary teachers associations, has said that “unless their demands were not met they would not return to work.” Their demands are : to amend anomalies in salary, voluntary transfer, continuity in service,  Provident Fund (PF), benefits on promotion for 10, 20, and 30 years of service, appointment to principal post for contractual teachers, to formulate a management policy for upgraded schools and simplification of their salary process, and finally to to keep teachers aloof from non-teaching work.

“As far as the demand for salary and service conditions are concerned, we do not have any  new demand. We just want anomalies to be amended as assured by no other than the chief minister himself. He assured that keeping in view of [the] seventh pay commission, [the] salary of teachers will be adjusted. We have at least sent 15-20 letters to draw [the] attention of [the] chief minister but of no avail.” 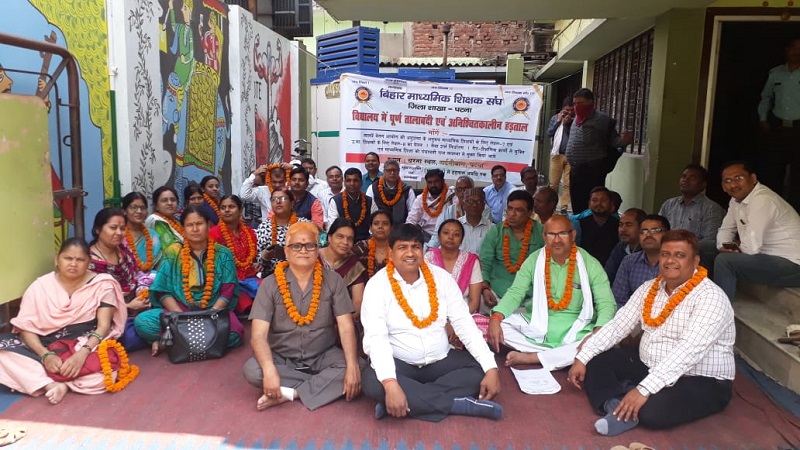 Explaining the service conditions, BSSTA president and MLC Kedarnath Pandey, who keeps raising the issue of Niyojit teachers in the Bihar Legislative council, said, “Keeping in view the recommendations of seventh pay commission, level -7 and level-8 of  pay matrix, which means a salary of 44,900/- and 47, 600/-, should be implemented.”

One of the other important demands is to make secondary school teachers outside the oversight of the local Panchayats. As Shatrughn Prasad Singh  explained “Nowhere in the country secondary education is in the hands of panchayats therefore they should be out of the purview of Panchayati Raj Institutions.” Describing the  numerous deaths of striking teachers, he further added

“Till now thirty teachers have died during the strike period. They are dying of heart attack, brain hemorrhage, and lack of money to purchase basic necessities of life. It is the biggest tragedy in the history of [the] teachers movement in Bihar. Earlier we were suffering from ‘Niyojanvad’ but now we are facing the violation of fundamental rights of teachers by [the] government itself. They cannot withhold the salary of striking teachers, it is totally  unconstitutional. Suspension of the striking teachers should be revoked immediately. After how many more deaths will the government listen to us.” 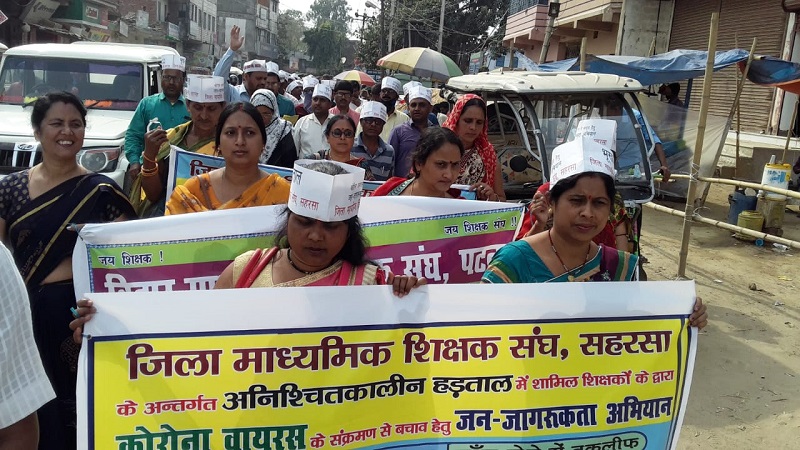 Root cause of the problem

In 2003 and 2005, contractual teachers called ‘Shiksha Mitra’ (education friend) for primary school (classes one to  eight) were getting Rs. 1,500 as a stipend and they were under direct control of the panchayats. Then in 2006, chief minister Nitish Kumar created a category of teachers called ‘Niyojit Shikshak’. Old ‘Shiksha Mitra’s were absorbed into the new ‘Niyojit Shikshak programme’. These ‘Niyojit Shikshak’s were appointed as teachers on fixed pay of Rs. 4,000 (untrained) and Rs. 5,000 (trained) for primary school, Rs. 5500 (untrained) and Rs. 6,000 (trained) for secondary school teachers (classes nine to twelve) up to the retirement age of 60. Their salaries were revised from time to time. It was a new experiment, as no other state in the country had the new category of ‘Niyojit’ teachers.

But are the Niyojit teachers the same as contractual teachers? Explaining the difference, Vijay Kumar Singh, editor of ‘Prachya Prabha’, a popular monthly magazine among  teachers, said “Niyojit teachers are not exactly like contractual teachers because their job security is fixed upto sixty years of age. They are not required to renew their contract but it is also true they are not like permanent teachers.”

By 2010 about 2.5 lakh teachers were appointed as Niyojit teachers. In April 2010, the Right to Education Act (RTE) came into force all across India. This act explicitly laid down procedures for the appointment of teachers. Earlier candidates who passed the secondary school intermediate examinations were eligible to be appointed. But, the RTE act made the ‘Teachers Eligibility Test’ (TET) mandatory for the appointment of teachers. The Bihar government adopted the TET in 2011 and in 2013-14, when there was a shortfall in the total number of teachers, the TET- passed candidates were appointed, but they were also bracketed as Niyojit teachers. In 2015, when Niyojit teachers went on strike for 42 days for enhancement of their salary, the Bihar government fixed a new pay scale, according to which these teachers would get Rs. 11,500 to Rs. 20,000 per month. At present, Niyojit  primary teachers receive a salary of Rs. 27,000 (trained, classes one to five) and Rs. 29,000 (trained, classes six to eight). Niyojit secondary teachers also get almost the same amount. Permanent teachers of the same category earn Rs. 60,000 (classes 1 to 5) and Rs. 80,000 (classes 6 to 8).

This anomaly was the basis of future struggles  by the Niyojit teachers. TET teachers formed several organisations. These teachers complained that since they did the same amount of work as permanent teachers, it was unfair that they got paid less than them. Thus the demand for “Equal Pay for Equal work” gained momentum.

Supreme court threw teachers at the mercy of state government

Niyojit teachers in Bihar saw a ray of hope in 2017, when the Supreme Court directed the Punjab government to pay basic pay-scale, which is given to the regular employees  for the same work. This decision inspired the Niyojit teachers of Bihar and subsequently a case was filed in the Patna High court , demanding ‘equal pay for equal work’. In 2017, the Patna High Court ordered in favour of the ‘Niyojit’ teachers, and found that is unconstitutional and a violation of  constitutional provisions if equal pay for equal work was not being paid.” The High Court also declared the state’s ‘Niyojit Shikshak Niyukti Niyamawali’, 2006 “unconstitutional under Article 14 of the constitution.”

According to administrative officers of the education department, if implemented it would have a huge burden of the already scarce state resources. Principal secretary of Human Resource Department R. K. Mahajan is reported to have said “To meet the expenses [of] ‘Equal pay for Equal work’, [it] will cost another 28-30 thousand crore rupees just to meet the salary. Government total allocation for education sector is 34,798 crore in 2019-20.”

Countering this argument, Rahul Vikas, a suspended primary school teacher of Begusarai and affiliate of TET since its inception  said

“Government says that we are short of resources but since primary education  is a fundamental right then it should be fulfilled anyhow. It’s up to [the] Government how they raise resources for that…  After enactment of RTE act in 2009, Bihar government should have amended their rules to suit the new requirement but they continued with their   old Niyojan Niyamavali of 2006 and more or less retained in 2012 also. When we appeared for the TET examination on the first page it was mentioned that we are giving an examination for a full fledged permanent teacher but we were cheated by the government. It is [a] very paradoxical situation when [the] government says that you can’t get [a] salary equivalent to permanent because we are not government teachers but employed by Panchayats. Our tragedy is that although we are working in government school but are not considered as government employees.”

National general secretary of AIFUCTO (All India Federation of University and College Teachers Organisation) Dr. Arun Kumar has written a letter to the Prime Minister to make an immediate intervention to end the deadlock. He stated, “Before going on strike, teachers’ associations have repeatedly sent memoranda reminding [the] state government about [the] bipartite agreement between teachers’ organisations and [the] state government. It is very unfortunate that  despite [the] appeal of teachers’ organisations and opposition parties, [the] chief minister is adamant to talk to teachers for their legitimate demands.”

Despite the threat of losing their jobs and FIRs, Niyojit teachers are determined to carry forward their fight.  Their resolute determination can be understood from the example of a suspended couple Anisha and Gajendrakant. Anisha, a teacher of  ‘Rajkiya Kanya Uchcha Madhyamik Vidyalaya’, Saharsa, was suspended and an FIR has been lodged against her for taking part in the strike while most of her male comrades backed out for fear of suspension and FIR. She has become a symbol of courage and conviction in the entire Saharsa district. Anisha’s husband Gajendrakant Sharma, is also a suspended secondary school teacher but in a different district, Arwal, 350 K.M from Saharsa. Lockdown have separated both of them but their fight continues. As Gajendrakant Sharma put it,

“[The] Government is using devious means to create [a] rift among teachers.  We understand their design so we are very alert. Our solidarity is our strength; they will not be able to break our solidarity.”