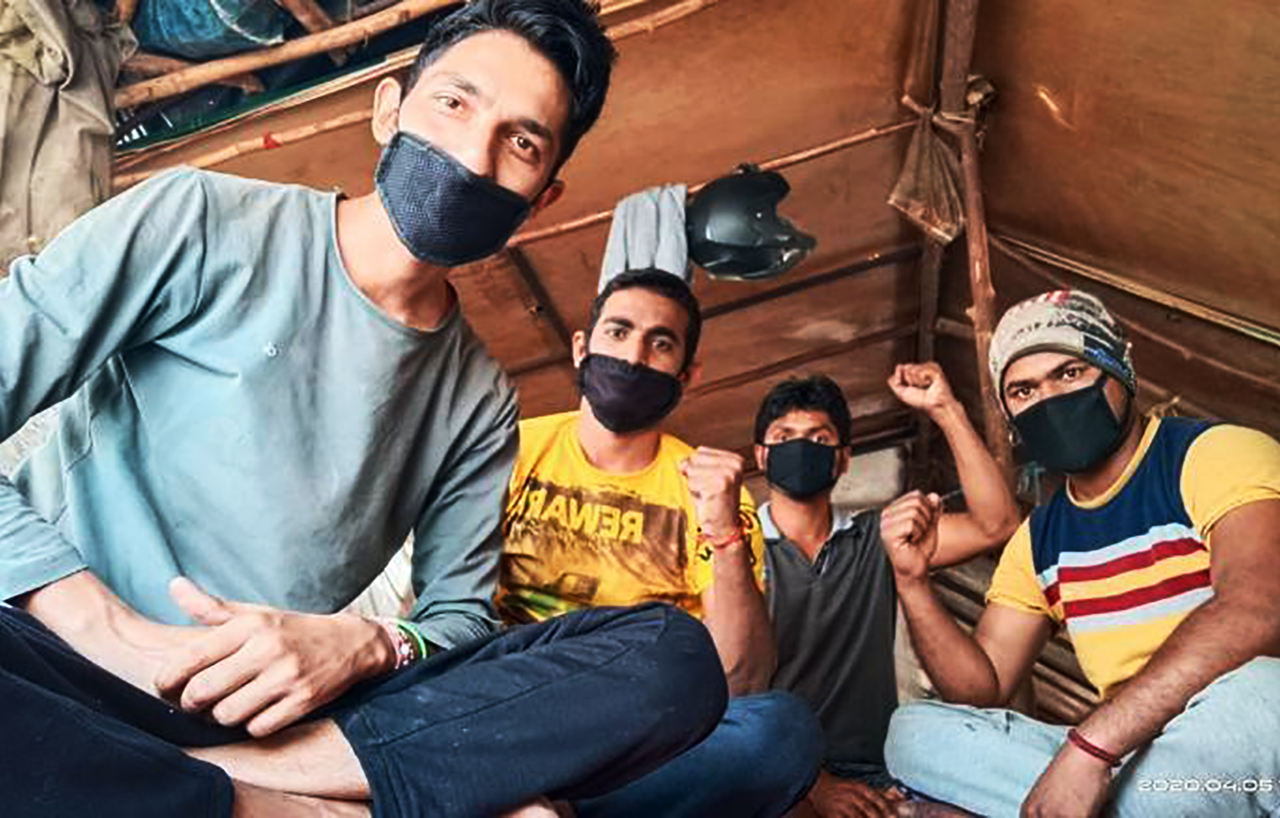 The workers of Bhagwati Products Ltd. (Micromax Informatics Ltd.) in Uttarakhand had won a significant victory against the company management as the Haldwani Industrial Tribunal declared a retrenchment order affecting 303 workers of the company illegal, and ordered the management to pay the retrenched workers the entire due salary for the period of 15 months from the point of retrenchment. Due to the ongoing coronavirus-induced lockdown, the factory is currently closed. However, 5 workers, aided by other workers of the company, continue to sit in protest.  The ongoing countrywide lockdown and its subsequent economic fallout will only add to the rampant retrenchment and other forms of oppression visited on workers by management. The future of these workers, along with thousands of other workers from various companies in Uttarakhand such as Voltas Limited, Shirdi Industries, Gujrat Ambuja, Amcor Flexibles, LGB, Karolia Lighting etc. looks highly uncertain.  A report from Uttarakhand.

Indian workers have been hit unimaginably hard in recent times and the coronavirus-induced lockdown will further aggravate their already precarious condition. The ruling class, in particular the BJP, is already using and will continue to use the contagion as an excuse to cover up how they have systematically sunk the national economy over the years through privatization and corporate monopolization of national resources and assets. They will surely use the epidemic as an excuse to distract us from the  vulnerable state that the majority of Indian workers are in and how the Indian labour policies have increasingly worsened it. One can only hope that the Indian working class would unite against the discrimination and grave injustices done to them over generations, that they will struggle to reclaim their rights and achieve a society and environment that puts care before profit.

Despite their limitations and painful failures, it is the various protest movements and multiple sit-ins across the country during the last few months – be it on the citizenship issue or the struggle by the contract workers of Honda company – that gave us some hope. The epidemic threat has changed the entire scenario. Yet, incidents like the victory of the Bhagwati Products Ltd. (Micromax) workers in Uttarakhand keep our hopes alive even amidst the ongoing turmoil. It took the workers a 15 month-long sit-in outside the factory gate, braving the coldest winter in decades, to reverse an illegal retrenchment order. Finally, on 2nd March 2020, the Industrial Tribunal, Haldwani, after hearing all the parties, declared the retrenchment illegal and ordered that the workers were to receive full salary with all dues for the past 15 months. The order was posted on 13thMarch.

Bhagwati Products Ltd. in Uttarakhand has a history of mistreating workers since it began functioning in 2008. All the workers from that time were retrenched by the end of 2011 and the existing workers have all been recruited from 2012 onward. In 2017, the workforce had a strength of 5000 with a considerable number of contract workers. In August 2017, all the contract workers were retrenched, and many permanent workers were transferred to the Bhiwadi and Hyderabad factories. It was at this point that the Bhagwati workers began to be united.

In September 2018, the Bhagwati workers applied to constitute a workers union named Bhagwati Shramik Sangathan. The formal verification of their application was done in December. Immediately, on 27th December 2018, the company management expelled 303 workers including 80 women, who had joined the union as members. All of these 303 workers have worked for less than five years in the company and hence are not eligible for gratuity. The President of the union, Suraj Singh Bisht, was suspended while the Working President Vandana Bisht was among the retrenched workers. 47 other workers were laid off as well.

In the following 15 months, the workers sat day and night in a relay hunger strike at the company gate. During this period they faced fabricated cases against them by the management and the police. It was also the beginning of a long legal battle that moved from the High Court to the Industrial Tribunal. 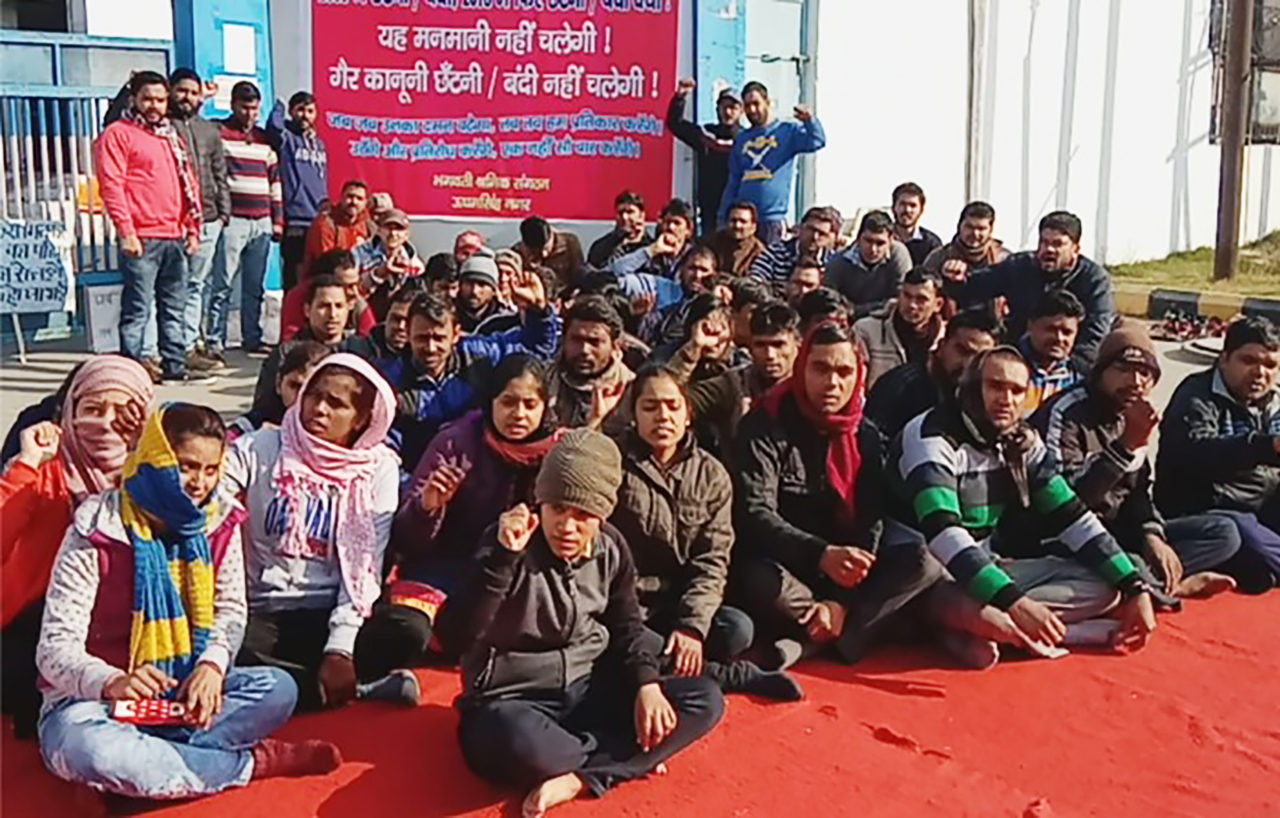 However, after the workers approached the High Court of Nainital, a one-judge bench consisting of Justice Alok Singh asked the BJP state government to intervene through the Chief Labour Secretary and ensure that the issue is sorted out within 40 days. The final victory came thanks to Advocate M. C. Pant’s timely reference to the case of Uttaranchal Forest Development Corporation and Others vs. Jabar Singh and Others (2007) that emphasized an important clause in the Central Industrial Disputes Act that the Bhagwati management had failed to comply with. Moreover, the management had declared a holiday on 27th December and when the workers came to work on 29th December, they were informed that they had already been laid off on 27th itself. The holiday and layoff on the same day indicated a clear case of pre-planned deception on the management’s side. The Tribunal pronounced its judgment in favor of all 303 plus 47 workers, ordering the management to pay them the full salary of the preceding months, while cancelling the layoff and taking all 303 workers back as employees.

It has become a common practice for companies these days to shift the bulk of their manual production from one place to another, the purpose being not to allow the workers enough time to organize and demand their rights. They remain in one place only until the subsidies and various concessions offered by the state governments run out. Bhagwati attempted the same. It was the same month of December 2018 when the company shifted the bulk of its machines to the factories in Bhiwadi and Hyderabad, while keeping the workers out of the Udham Singh Nagar (Uttarakhand) factory under the guise of paid leave. For now, the Nainital HC has issued an order preventing the company from continuing to shift the machines. Moreover, the management is (for now, at least) also bound by its own written statement that it is not going to close the factory in Udham Singh Nagar.

One of the reasons industries shift from one state to another is to prevent workers from uniting. In the case of Bhagwati Products as well, there is a direct relationship between the attempted unionization on the workers’ behalf and the retrenchment order in December 2018.

The Bhagwati Workers Organization (Pantnagar) was formed between September and December 2018. But due to the intervention of the management, their registration was not completed. However, the workers took another initiative and successfully formed a new union called the Bhagwati Employees Union (Pantnagar), which was finally registered on 26th February 2020 (Reg. no. 410). This was a step that inspired the Bhagwati workers. 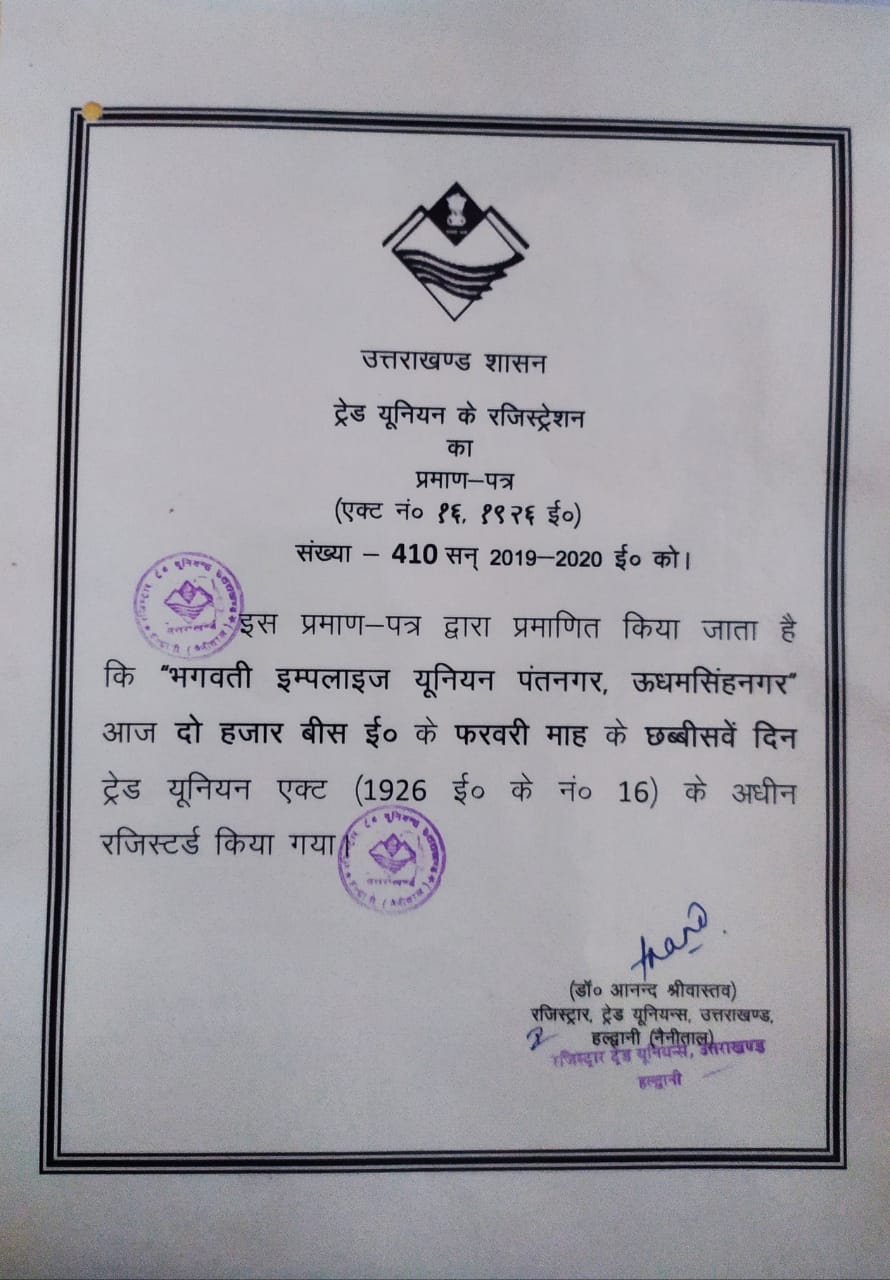 But in the current situation, when the judiciary and the administration are thoroughly compromised, what does a union entirely relying on legal strategies really amount to? This can be seen in the case of several other trade union movements in Uttarakhand, through their failures and glitches. At best, as in the case of Bhagwati, a certain amount of temporary justice and relief can be achieved for the permanent workers, while the contract workers are systematically replaced by NEEM trainees who are legally deprived of basic workers’ rights by design. However, now the coronavirus pandemic has led to severe inconvenience even among the organized permanent workers including the Bhagwati workers.

For example, the Voltas workers were supposed to receive monetary compensation from the management on 24th March 2020, after a six months long period of being unemployed. This is now being held back due to the lockdown. Shirdi Industries has been trying to shift their factory from Pantnagar since last year, and 90 workers have been illegally laid off by the management since 20th January 2020. It is uncertain when the workers movement will pick up its pace again. The LGB management was incensed by the SC’s dismissal of the suspension of the President of the LGB Workers’ Union and the management has increased the level of oppression on the workers in various ways. The Gujarat Ambuja Workers Union has organized a silent protest from 23rd December 2019 against the management that ordered the suspension of two workers. Since 28th January 2020, the workers along with their family members have been in protest sit-ins, which also is on hold now.

Naturally, none of these workers have received any support from the state labour department or the administration. The attacks on the workers are taking place in an environment of increasing contractualization of the Indian workforce, punitive measures against participating in strikes, forced overtime, precarity of work, and abysmal work conditions, all coupled with the implementation of many other amendments in labour laws that were vehemently opposed even by nearly all the central trade unions.

The struggle continues despite the virus

On 27thNovember 2019, the Micromax workers organized a symbolic protest by parading with the ‘dead-body’ of the management. It isn’t really ironic to note that the management indeed continues to be dead as far as the workers’ welfare is concerned. 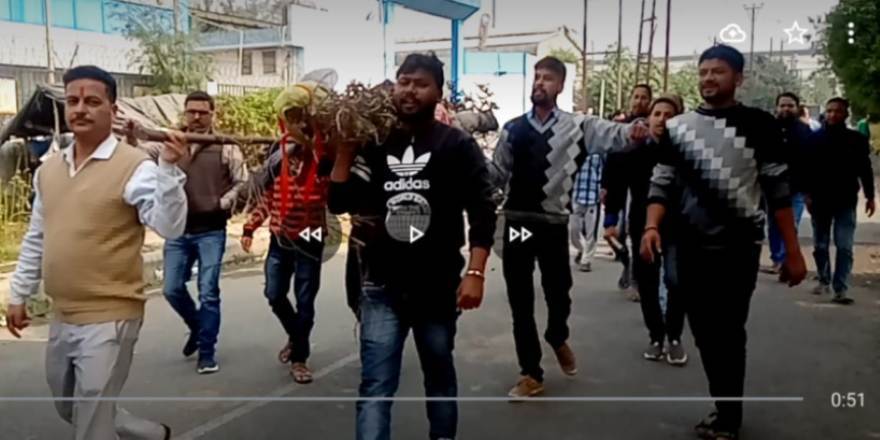 After the illegal layoff, many workers who lived in rented houses were forced to leave their rooms. Some of them made the sit-in protest site at the company gate as their temporary residence. Even after the unplanned lockdown of the entire country was announced by the Prime Minister to contain the spread of the virus, 5 workers of Micromax continued with the sit-in at the same site. The rest of the homeless workers were accommodated at the homes of their comrades. All the Micromax workers and some of the other unions have joined hands to arrange food and rations for the demonstrating workers and those who have become homeless.

While the workers are braving this crisis, the central government, state government or the local administration have remained mute and inactive, despite the many big promises they made, both in terms of providing enough food and ensuring wage security of the workers during the lockdown period. None of the Prime Minister’s antics of ‘banging thalis’, ‘ lighting candles’ or ‘switching off lights for 9 minutes’ is of any use to the millions of the workers who toil days and nights to keep the society running, and who now have been turned into a starving multitude.

In an effort to divert the attention from the unimaginable hardships caused to the migrant labourers and the overall chaos brought by this unplanned lockdown,  the RSS-BJP IT cells and the media have been relentlessly spreading fake communal stories and messages, scapegoating Muslims for this epidemic, leading to demonization of an entire community and inciting brutal attacks on Indian Muslim working class even during a time like this. As a workers’ magazine that covered the entire struggle of the Bhagwati workers has correctly pointed out: “Profit has its own Sanskriti [culture] that has space only for [the owner’s] lust for profit, not for humanity. Profit has only one religion –‘squeeze the surplus out of a worker as much as you can and then leave him to die on the roads.”

Feature image: The 5 workers at the company gate during lockdown