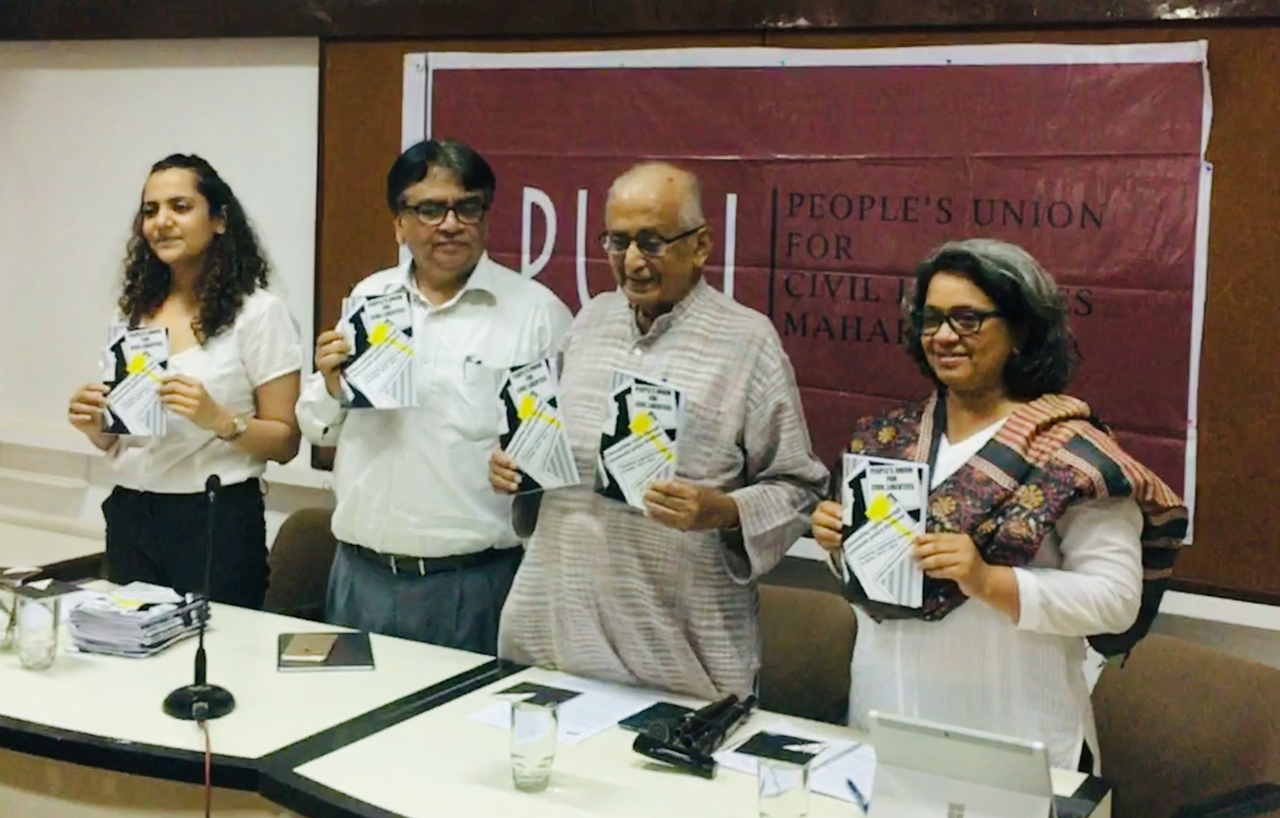 A report out of the People’s Union for Civil Liberties (Maharashtra) does what needs to be done: talk about the Modi government in a way that takes into account the totality of its assault on democratic institutions and fundamental rights via policy dilution. A report by Samir Dhingra.

In a time when ‘surgical strikes,’ military or otherwise, are celebrated, it is perhaps useful to recall that there exist other forms of conflict and, for the purposes of this article, reportage of the same. There are, for example, acts of terror that snatch up column inches in our newspapers. There is the more widespread psychological warfare, which through the use of carefully worded propaganda that is furiously communicated to millions alters a people’s collective consciousness, causing them to turn on one another in rage. A ‘siege’ is a prolonged conflict that wears the enemy down, usually by attrition.

How does one report on a siege? Ignoring the rabble-rousers and jingoists, even the “liberal” mainstream media has opted to present to us a daily list of excesses, of grievances unaddressed, of failing defenses and loss of life; predictably, this has over time blended into the background. The change is palpable: as a people we have become inured to violence and injustice. A sense of resignation underscores our reading of the daily news; we are troubled by everything, and yet remain unmoved. A sense of hopelessness pervades every redemptive action.

In these dark times, reports such as the booklet titled “Dismantling Rights Through Systematic Policy Dilutions — Tracking Legislative Changes in India: 2014–2019” brought out by the People’s Union for Civil Liberties (PUCL) on 22 April, show a way to describe such a siege. The booklet was released at a small meeting organized at the Mumbai Press Club. It is a carefully researched work and, while (by their own admission) admittedly far from comprehensive, gives one a clear indication of the extent to which the Modi government has assaulted democratic institutions and fundamental rights via policy dilution. This article is intended to be a teaser, intended to highlight examples in hopes of enticing the reader to read the entire PUCL report, from which all the quotations are sourced.

A few months after it came to power, the Modi Government passed the National Judicial Appointments Commision (NJAC) Act (2014), under which the Collegium system would be done away with, and be replaced by the NJAC. The opacity of the Collegium notwithstanding, the NJAC in principle would have allowed the executive branch to influence appointments and transfers of judges, thereby constituting an unambiguous threat to the independence of the judiciary and the constitutional principle of separation of powers.

Thankfully, only a year after this putsch, a five-judge bench struck down the NJAC, referring to it as “unconstitutional and void.” Despite this, the government has repeatedly interfered with judicial appointments and elevations, as in the cases of Adv. Gopal Subramaniam, Justice J. Patel, and Justice K. M. Joseph.

The Aadhaar (Targeted Delivery of Financial and Other Subsidies, Benefits and Services) Act (2016) was introduced in the Lok Sabha as a money bill, thus bypassing the need for the bill to be approved by the Rajya Sabha and thereby subverting constitutionally instituted safeguards against a misuse of power. Soon after it was passed, various government services began making Aadhaar registration mandatory despite widespread criticisms from activists and civil society who cited the lack of protections against data theft, potential for misuse of biometric data, and the possibility that Aadhaar would be used as a surveillance tool. Needless to say, none of these criticisms were addressed.

Its constitutionality was challenged in 2018, and while it was upheld, various provisions of the Act were struck down. This has been reversed by the Aadhaar and Other Laws (Amendment) Ordinance (2019) which reintroduces the very same provisions struck down by the Supreme Court, allowing for Aadhaar-based authentication in banking and telecom sectors.

Subverting constitutional mechanisms to sidestep safeguards against illegitimate uses of power is a recurring motif, as we will see.

The changes to taxation law introduced by the Modi government are problematic (although not strictly unconstitutional) for a number of reasons, as highlighted in the PUCL report. Among them are:

On 8 November 2016, in an alleged attempt to weed out black money, terror funding, and corruption, the Modi government summarily declared that large-denomination notes would no longer be legal tender, sending the economy into a tailspin. Daily-wage labourers in the agriculture and industry sectors, and small-businesses were the worst affected, and the move even led to a number of deaths. It is estimated that demonetization led to the loss of close to 11 million jobs. All of this is in addition to the fact that the move itself was a gigantic failure, as the Reserve Bank of India reported in 2018 that 99.3% of all demonetized currency was recovered, thus rendering the move ineffective in achieving its goals.

Significantly, the move to demonetize the bulk of circulating currency was taken without any legislative involvement and was widely lambasted by economists both in India and abroad.

The original Foreign Contribution (Regulation) Act (1976) was intended to prohibit any undue influence of foreign governments and corporations on domestic affairs. In particular, it barred political parties from receiving foreign funding.

The Finance Act (2016) amended the FCRA by changing the definition of “foreign source” in order to legalize private funding to political parties. Ultimately, amendments like this allow for the possibility of subordinating the interests of citizens to those of business and capital.

Once again, the change to the FCRA was smuggled under the cover of a money bill, thus allowing the amendment to sidestep further legislative scrutiny by the Rajya Sabha. Curiously, the very same FCRA is being used by the Modi government to target NGOs that have been critical of its policies.

Electoral bonds, too, were introduced and provided protective cover against legislative scrutiny from the Rajya Sabha via the Finance Act (2017). Political parties are not obliged to reveal their donor’s names. In fact, this extends to corporations as well: while it used to be the case that the Election Commission and the Income Tax Department had the authority to audit companies that made large donations to political parties, the amendments introduced under the Modi government no longer require companies to keep a record of the donations they receive or be audited in this respect.

… 16-18 years is an extremely sensitive and critical age requiring greater protection. Hence, there is no need to subject them to different or adult judicial system as it will go against Articles 14 and 15(3) of the Constitution.

To quote the PUCL report, “preliminary assessment into heinous offences by the Juvenile Justice Board in effect attributes guilt before trial.” As it clarifies further, underlying this legislative change is “the assumption that children and adults could be held to the same standards of culpability and that children are capable of participating in legal proceedings like adults.”

The Child Labour Prevention (Amendment) Act (2016) restricts the number of “hazardous industries” where the employment of children below the age of 14 was prohibited from the original eighty three to just mining, explosives, and those included in the Factories Act. It also allows children to work in family enterprises during vacations and after school hours, a provision that is bound to be exploited.

for making all forms of Talaq-e-Biddat, not only void, but also illegal, and a cognizable, non-bailable offence, punishable with imprisonment of up to three years.

This is despite the fact that in the Shayara Bano case, the Supreme Court unambiguously declared that the practice of “triple talaq” is in violation of Article 14 and consequently has no effect on the legal status of a Muslim marriage. All things considered, the bills and ordinances passed in this regard not only bypass proper parliamentary procedures, but also stink of an effort to “stigmatize and isolate the Muslim community.”

There are many other changes to the law that have had questionable motives or woefully inadequate or poorly considered, such as the Transgender Persons (Protection of Rights) Bill (2018), the various amendments to laws punishing rape, the Trafficking of Persons (Prevention, Protection and Rehabilitation) Bill (2018), and the Surrogacy (Regulation) Bill (2016).

The laundry list of policy changes that have been at best arbitrary and at worst downright regressive continues. GX has reported on some of these in the past:

The PUCL report contains a number of other examples, and we have just skimmed the surface here. To quote from the Conclusions,

…the most dangerous trend that is visible is the attempt to totally dismantle and crush all institutions of accountability in the country which are crucial to any functioning democracy… Most policy changes brought about are completely partisan, communally motivated, promote unsustainable and destructive development, and unfettered destruction of natural resources by the corporates… India is witnessing a constant attack on the independence of its various agencies and institutions such as the information commission, the judiciary, the quasi-judicial tribunals, and Lokayukta from executive political interference.

The liberal mainstream media (once again, setting aside the jingoistic and Hindutva-fuelled outlets) is supposed to function on the principle that it is duty-bound to to supply its viewers with the facts. (Curiously, apart from The Hindu, no reporters from the major English dailies attended the release.) This is commendable, but as we enter the age of “fake-news,” two problems immediately confront these organizations:

To bombard an individual with an endless sequence of facts is bound to be a disorienting, alienating, and exhausting experience. What, then, are the alternatives?

An attempt must be made to string together these facts into coherent narratives. Stories are easier to understand, remember, and communicate — they are more relatable, and unlike a collection of facts, they add up to something. Returning to our discussion of modes of warfare and reportage: to adopt a bird’s-eye view of a siege is priceless. A global perspective affords us the opportunity to tease out general trends, to ascertain the extent of damage inflicted, and most importantly allows us to anticipate further attacks and shore up our defenses.

This bird’s eye view must be woven together from many interlaced narratives, each following its own thread and with it, highlighting fresh contradictions. The media’s role is to act as a vehicle for these individual narratives, while factually verifying them and situating them in their appropriate context, enabling each of its readers or viewers to themselves take the flight required so that they may fully see and understand the siege.

The PUCL report on systematic policy dilutions does precisely this. In providing an enveloping narrative, it allows us to survey the extent of the assault on fundamental rights and democratic institutions undertaken by the incumbent government. Future historians of our troubled times will no doubt record the nature and mechanisms of Modi government’s warfare upon the corpus of this nation, and this report is bound to be of great use to them.