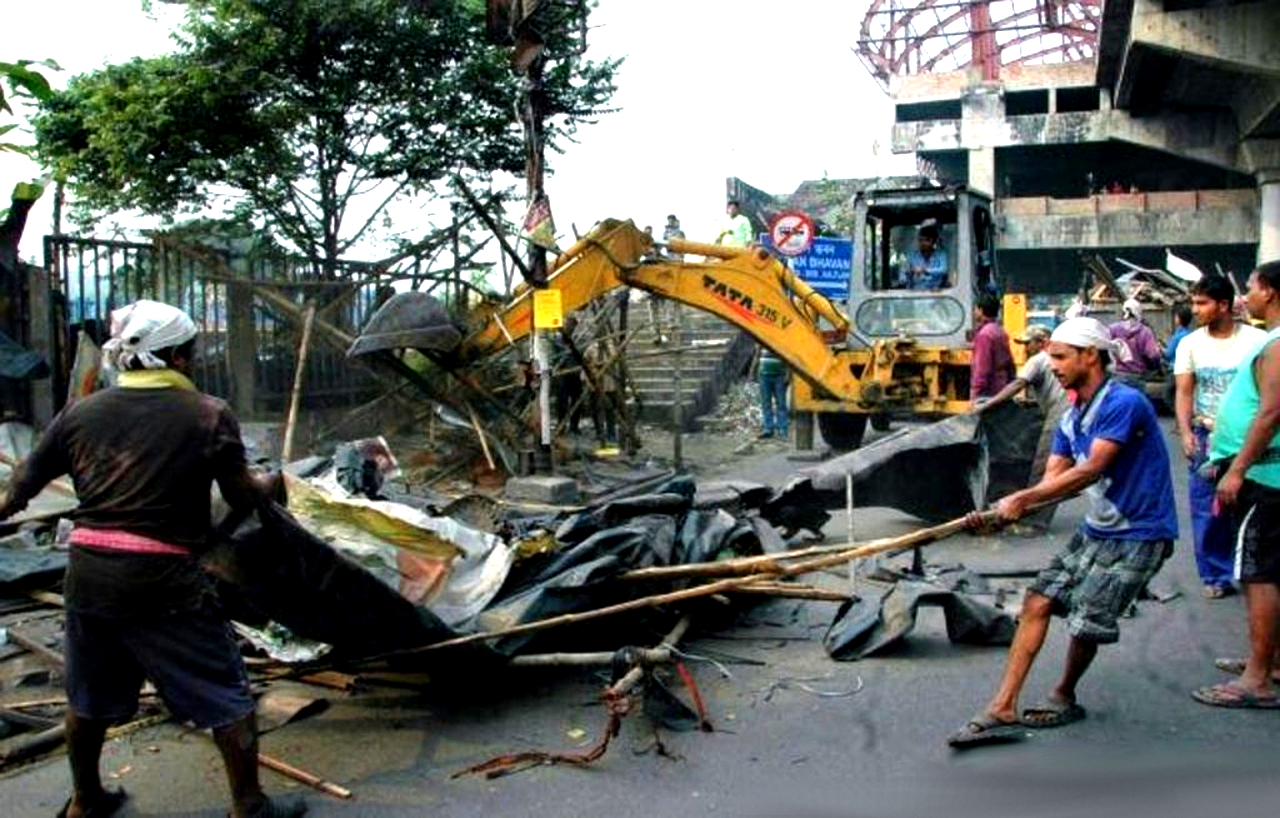 “Hawking is not illegal, Eviction of Hawkers is.”

While the Prime Minister talks of ‘pakoda’ selling as employment generation for the nation, and the Chief Minister declares ‘telebhaja’ (fried snacks) as an alternative ‘shipla’ (industry) for the state, the ground reality is totally different. Self-employed ‘street vendors’ are seen as a nuisance by civic authorities across the country. A Groundxero report on the recent spurt of evictions of street vendors in Salt Lake city near Kolkata in West Bengal.

Mayor of Bidhannagar Municipality Sabyasachi Dutta promised a ‘hawker free Salt Lake’. Salt Lake is one of the posh township adjacent to Kolkata, and an important economic and administrative center owing to the recently sprung up IT sector in New Town at Rajarhat. In this anti-poor corporate model of expansion of the city, long known for eviction of locals from their lands, it is the poor hawkers, their small ghoomties (structures by the roadsides) and stalls that have served as a lifeline for the middle class working population of these parts. They provide quick and cheap food and refreshment to the middle class working population in these areas. But in the current drive under the guise of ‘cleanliness’ and ‘beautification’, frequent attacks have been launched on the hawkers; time and again their stalls and shanties are bulldozed, kiosks are dismantled and the articles are seized by the police and the civic authorities.

The Bidhannagar Municipality launched a fresh round of hawker evictions just recently on the 30th and 31st of January, 2019. A large-scale hawker eviction took place across nine different ‘tank areas’ under Salt Lake municipality, from tank number 8 to 16. The excuse given for the evictions was the Calcutta Book Fair 2019. This is the latest in the recent policy of mass-scale hawker evictions in the pretext of an important event. Thousands of hawkers faced similar actions during the Under-17 FIFA World Cup, 2017. Almost 3000 hawkers were evicted in the Salt Lake region to ‘beautify’ the city for the event and the international tourists. Hawkers coming from different parts of the city or suburbs for their small businesses, are seen as a nuisance for occupying a portion of the footpaths, creating traffic snarls and even accidents and other urban civic ‘inconveniences and inefficiencies’.

This year’s recently concluded Book Fair was the most recent excuse used by the civic authorities to evict street vendors. The pavements on the roadside of tank areas 8 and 9 have been cleared off. The owner of a tea-stall in the DL block told us that the hawkers who sat near tank area 9, Karunamoyee Bus Terminus and places nearby, have been forced to move out of the area. Except for a coolfi shop near the petrol pump, all other stalls in tank area 9 have been removed.

GX spoke to Durga, a tea seller at the Karunamoyee Bus Terminus. Durga comes from Keshtopur, around 7 kms away. She used to sell tea, biscuits, cigarettes and cold drinks, on a make-shift wooden platform with a shed. Now she sets up the stall on a small table. As we enquired about why she was leaving this early, she exclaimed “I am leaving before the holla gari (police van) comes. This started around the U-17 World Cup and since then has been going on every now and then. Before the Book Fair the police raids escalated. Now they come at any time of the day. The way they treat us is very humiliating. My husband asked me to stop working but it is not possible for I have been in this business for last 14-15 years now.” With a pause she continued, “As the book fair was about to start the police vehicle moved around announcing that the hawkers should leave. Few days later police came and dismantled even our table, the shed, threw away all the items we sell. Their attitude is rude and inhuman. There was a telebhaja (fried snacks) shop here. The police came and spoiled everything. They dismantled that table and threw the batter soaked vegetables onto the road. They sometime even seize our utensils and accessories as well.” Talking of how much this has affected her business she said, “Previously, I used to sell ₹3.5-4k per day. Nowadays I make just ₹700-800, which means after managing everything, a profit of only ₹100-150. I fortunately earned ₹1000 today as the other tea seller was not there.”

In order to understand why such evictions are undertaken just before such mega-events, GX spoke to Murad Hossain of Hawker Sangram Committee. He said, “These events are just pretext…When cars block roads for hours in front of Loreto School or Calcutta Boys School, we don’t see police taking any action. But if a child takes a rickshaw to get down in front of these school then that is considered to cause traffic problems, the poor rickshaw puller is picked up by the police… This entire model of city ‘development’ is ultimately for the rich and in this model of development the poor are the ones paying the price.” He also shares how drastically different the reality is, from the narrative the public have been fed with. Speaking of Operation Sunshine, a massive hawker eviction program taken up by the Left-front Government, he says, “After the hawkers were removed from the streets in Operation Sunshine, in 1996, for the first time the jewellery shops in Hatibagan and Ballygung areas were looted. This had never happened before, since the British times. Other than that, night shows in the cinema halls of Hatibagan used to be full, but after Operation Sunshine the night shows almost stopped. In Gariahat the Shop Owners’ Association had submitted 11 deputations asking to remove the hawkers, before Operation Sunshine. Two years later, the same Association submitted a letter in Lalbazar (the city police headquarters) asking to resettle the hawkers as they saw a sharp decrease in their sales. Later they even held joint protests with the hawkers.”

Basudev Nag of People’s Brigade says, “Hawking is not illegal but eviction of hawkers is. As per law, the government is supposed to constitute a Town Vending Committee. Till such a body is constituted the Government cannot evict hawkers.”

On 25th and 26th of January, People’s Brigade called for a road blockade at Khanna crossing in North Kolkata in protest of hawker evictions. They were met with severe police repression. The hawkers were severely beaten and manhandled by the police force. Basudev Nag added, “The police threw us from one side of the road divider to the other. One of the female protestors was dragged by her stroll (orna), round her neck. There was no female police present there. Such protests make hawkers confident that they can resist such repression. At many places they are resisting evictions.” 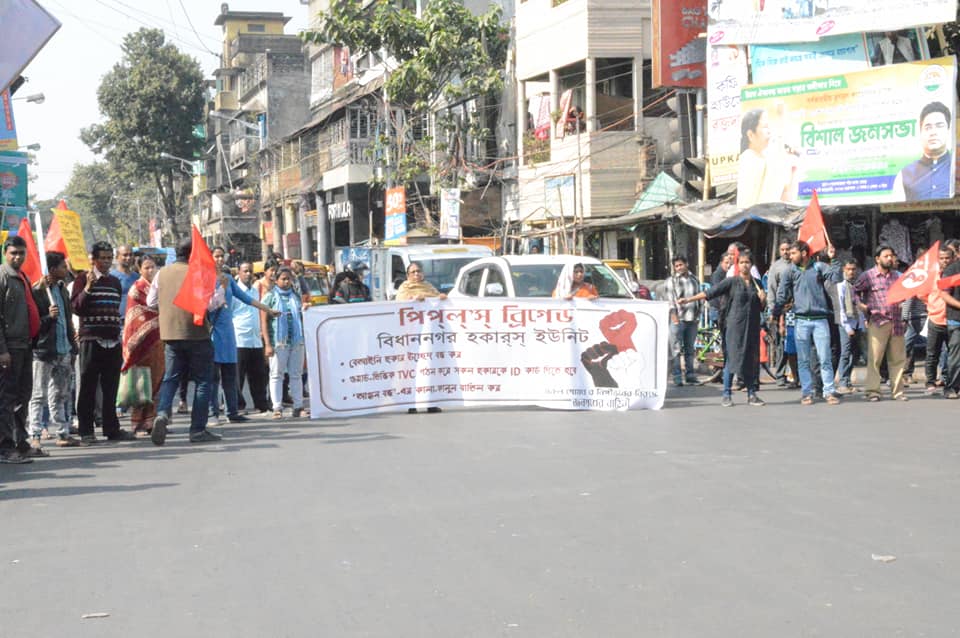 In 2017 the Kolkata High Court gave ultimatum to the State Government to constitute a Town Vending Committee within 12 weeks. The Street Vendors (Protection of Livelihood and Regulation of Street Vending) Act, 2014 mentions formation of a Town Vending Committee in each metropolis. The body will be headed by Municipal Commissioner or Chief Executive Officer; and the government will nominate its members representing the local authority (such as the medical officer of the local civic body, the planning authority, the traffic police, the local police, association of street vendors, members of market and traders associations, non-governmental organisations, community based organisations, resident welfare associations, banks and such other interests as it deems proper). The Act further states, “the number of members representing the street vendors shall not be less than forty per cent and they shall be elected by the street vendors themselves…” It also states that one-third of members representing the street vendors shall be from amongst the women vendors along with due representation for the Scheduled Castes, the Scheduled Tribes, Other Backward Classes, minorities and persons with disabilities from amongst the members representing street vendors. The body is responsible for performing surveys and identifying street vendors, then issuing identity cards or licenses to them. The body is also responsible for designating “vending zones” in the city. The Act also states, “No street vendor shall be evicted or, as the case may be, relocated till the survey specified under sub-section (1) has been completed and the certificate of vending is issued to all street vendors.”

The West Bengal government has violated the law ever since. To contest this illegal eviction a series of writ petitions were filed. The Kolkata High Court in its  August 4 2017 judgment directed the State Government to frame the rules under the Street Vendors Act, 2014 and formulate a scheme within twelve weeks. “No further extension of time for carrying out the task will be given to the State and appropriate action would be taken against the State if it is brought to the notice of the Court that the State has failed to comply with our order,” said the order. 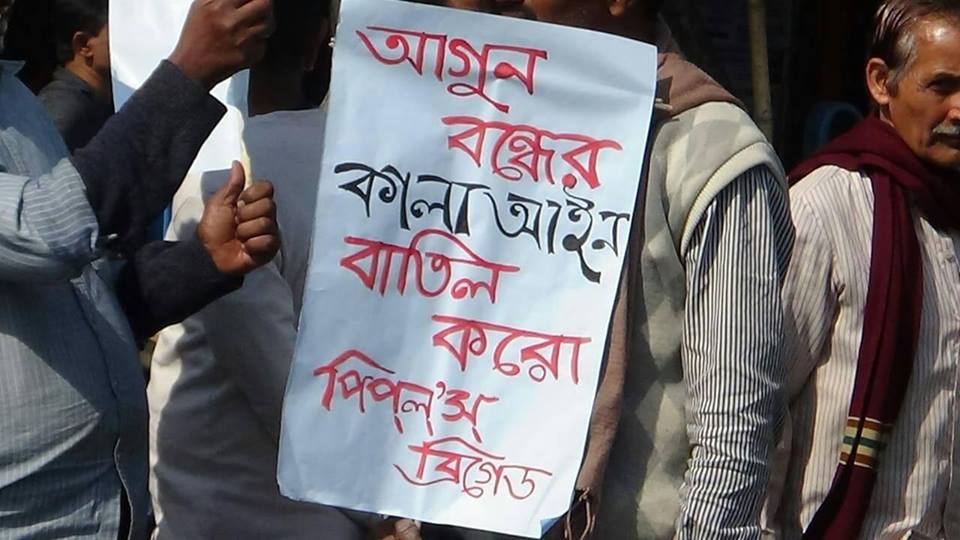 From the Road Blockade at Khanna Crossing

The State Government finally passed the West Bengal Street Vendor Rules 2018 on 7th August 2018, more than a year after the court order. The Rules did away with the due representation for the Scheduled Castes, the Scheduled Tribes, Other Backward Classes, and religious minorities, which is in contravention with the 2014 Act. A condition has been added through these Rules that would jeopardize the livelihood of a large section of the street vendors. For instance, the Rules state that use of ‘fire’ during vending shall result in cancellation of license. “The Rule passed by the state government is authoritarian. Most of the street hawkers are food vendors, thus going by this law all such vendors will be termed illegal,” said Mr. Basudeb Nag.