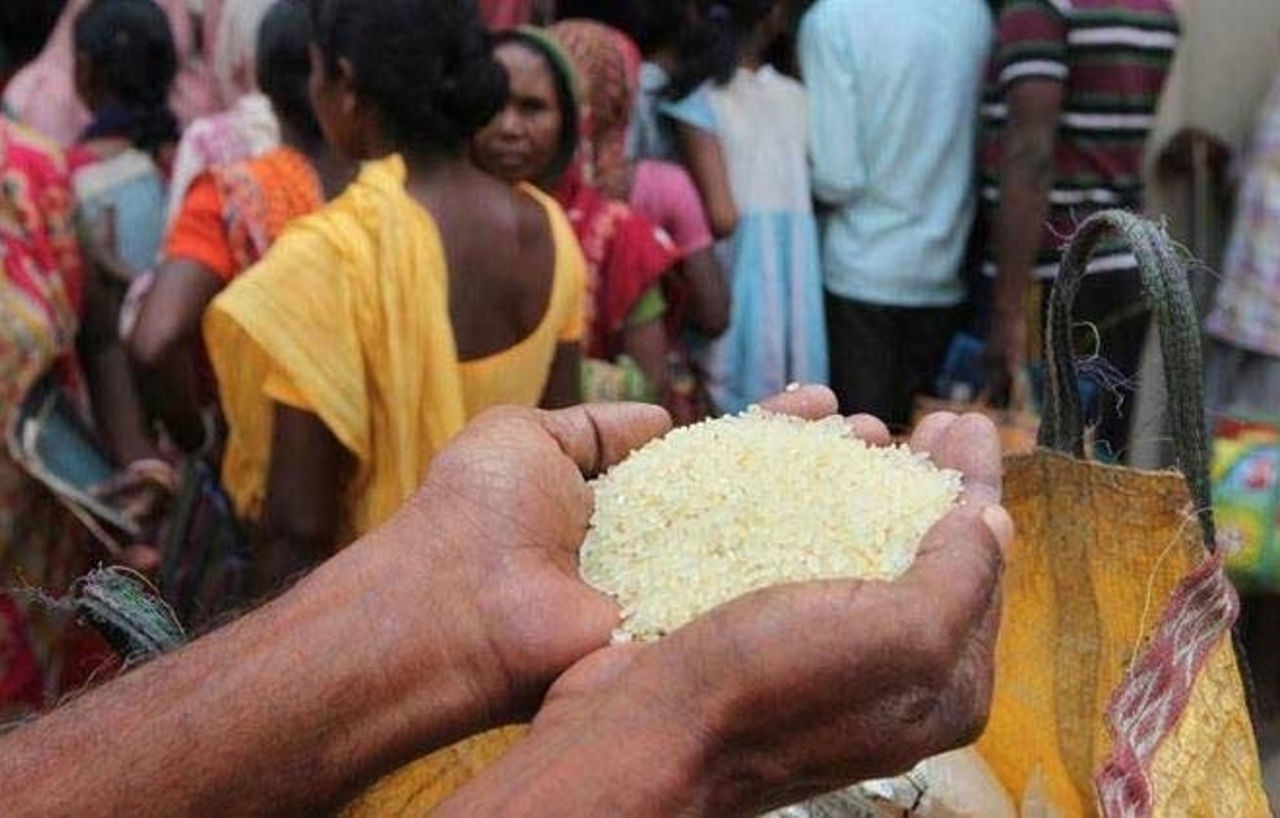 On this 15th of August, as the rulers of the nation were busy thumping their ‘big chests’ screaming sermons of world leadership and patriotism, Bimala Pandey, an old widow in Purulia, West Bengal, died of hunger while begging for a morsel of rice at her last moments. Starvation deaths are intimately linked with non-deliverance of crucial social security measures such as PDS, NREGA, etc. The highest Court meanwhile upholds Section 7 of the Aadhaar Act making biometric authentication mandatory for availing welfare schemes, guaranteeing further large-scale denials, and future deaths. A GroundXero report based on fact finding conducted by Right to Food Campaign.

A recent fact finding report looks into the death of Bimala Pandey from Lagam Tola, Panrua village of Jhalda-II block, Purulia. On 15 August 2018, India’s 71st Independence Day, The Telegraph carried a report stating that she collapsed to death while begging for rice at her last moments. On 23rd August 2018, a team from the Right to Food Campaign West Bengal went to meet with the family of Lt. Bimala Pandey and to investigate about the status of the National Food Security Act (NFSA) implementation in that area.

Abir, her son, informed that the family has no ration card or job card. He claimed to have asked Panchayat members many times for a job card, none had responded. His mother did not receive any widow or old age pension, although they had requested the political representatives many times about this. Abir added that they face discriminations from local ruling party. Only those who are close to the party receive Old Age or Widow pensions. In other words the family was totally deprived of any Government entitlements.

A group discussion was held with 15-20 villagers about their economic status and status of NFSA implementation. No new ration card has been issued after 2011, said the villagers. They also informed those who have ration cards receive 200g less of ration per unit that what they are entitled to, and the dealer sells that cut later in the black market. In case of NREGA, they do not receive regular jobs, most of them also don’t know what a “job card” is, or how to apply for one and get work. Villagers supported Abir’s allegations about discrimination in case of receiving Old age and widow pension. They informed that earning members from most of the families migrate to other states or cities in search of jobs. They also expressed regret that they had to watch Bimala starve to death. But their condition is itelf not much better than that of Bimala, to be able to provide her with regular food.

The fact finding report conclusively states, the efforts of the administration to reach out to people who are in dire need of help seems totally inadequate. MGNREGA has also failed to provide Bimala’s son with work. The fact finding team described this as a starvation death due to the absence of universal coverage, while the local administration denies any responsibility.

Bimala is a victim of negligence and improper implementation (or non-implementation) of NFSA, NREGA and pensions schemes. Over the last few years such accessibility has only been further hampered by implementation of Aadhaar-based biometric ‘authenticity’. The decision to make Aadhaar mandatory for accessing public distribution system is only going to kill more Bimala’s.

As many as 56 hunger deaths (at least) were reported in the last four years, of which 42 happened in 2017 and 2018 alone. This is a telling reminder of the precarious existence of the Indian poor. Many of them depend critically on social security pensions and the public distribution system (PDS) for survival. Denial of PDS rations or pensions account for most of the hunger deaths. Most of the victims are from disadvantaged groups, e.g. Dalits, Adivasis and Muslims, though starvation deaths are definitely not just limited to such groups. 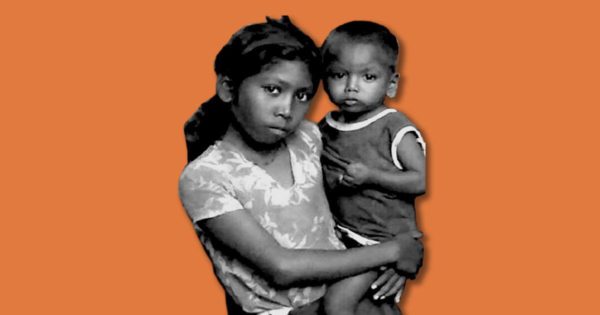 News reports of starvation deaths have been coming in a steady trickle over the past few years. One particularly tragic episode was that of eleven-year old Santoshi Kumari in Jharkhand. She died one year ago, on 28 September, begging her mother for rice as she slipped into unconsciousness. It was later learnt that her family had lost their ration card because it had not been linked with Aadhaar (In mid-2017, the Jharkhand government mass-cancelled Aadhaar-less rations cards).

On the occasion of Santoshi’s death anniversary, the Khet-Majoor Samity, with the help of Right to Food Campaign Delhi, Odisha, Jharkhand and West Bengal, compiled the list of reported hunger deaths from 2015 onward. Click here to find the list of compiled hunger deaths from 2015-18. The term hunger death means the victim died after prolonged hunger because there was no food or money in the house, and that, quite likely, he or she would have survived otherwise. This is only a partial list however, based on Google searches into English and Hindi media.

Out of 42 hunger deaths in 2017 and 2018, a large majority (25) were related to Aadhaar. At least 18 of these deaths were directly due to Aadhaar (see Details column highlighted in yellow and bold). Common reasons include losing one’s ration card or pension for lack of Aadhaar linking, and failure of Aadhaar-based biometric authentication (ABBA), which is compulsory – for practical purposes – in several states. Another 7 deaths possibly related to Aadhaar (Details column with only a yellow highlight). These are mainly cases where a person was denied PDS rations or a ration card for unspecified reasons, which are likely to be related to Aadhaar in some cases at least.

List of hunger deaths from 2015-18. Source: Right to Food Campaign

Reports of hunger deaths are particularly frequent in two states: Jharkhand and Uttar Pradesh (16 cases each). In Jharkhand, ABBA is effectively compulsory in most ration shops. Uttar Pradesh has implemented the National Food Security Act in a belated and haphazard manner.

PDS Scams on rise due to AADHAAR

As per an NDTV report, The Uttar Pradesh government has admitted that a scam worth crores, in which food grains meant for the poor, under the Public Distribution Scheme (PDS) was being diverted to the open market by ration shop owners and officials. Aadhaar numbers of genuine beneficiaries were being replaced with those of imposters, according to officials. The government says Rs. 30-crore worth subsidized food grains have been diverted to the open market in the last three months through 1.86 lakh fraud transactions.

In response to the FIRs filed by the UP government against the shop owners, the shop owners submitted their plea to the Allahabad High court which clearly states, “The user ID and password is prepared by area supply inspector too and higher officials of the food department of UP government in the districts. The website cannot be operated until and unless the user ID and password is opened by food inspectors”. In order to supplement their plea they added an audio evidence where a female food inspector is heard asking her staff to show that 90% of the month’s ration was distributed to original card holders.

The opposition alleged that Ministers in the Yogi Adityanath government have downplayed the scam, as Rs. 25-30 crore out of a yearly budget of Rs. 9,000 crore isn’t a ‘significant’ amount. “Since the time their government was formed, they have been talking of different models for PDS, sometimes they say Jharkhand model, sometimes Chattisgarh model but in over 16 months now, the only model that has come is a scam-based model,” said Manoj Pandey of the Samajwadi Party.

Hunger deaths, in any healthy democracy, would make headlines and become a matter of national debate and action. Some of the cases reported here did receive some attention, but even those did not lead to the sort of sustained pressure that would force the government to do what it takes to prevent hunger deaths. Most of them barely made it to the “news ticker” of screaming “Breaking News”. On the contrary, despite growing evidence of the counter-productive role of ABBA in the PDS, the Central government persists in its determination to make it mandatory across the country.

On the occasion of Santoshi Kumari’s first death anniversary on September 28, Right to Food Campaign is planning a Twitter Campaign with #BhookhKiBaat.