The ‘nation’ is what the government thinks it is. Anyone who thinks differently is ‘anti-national’. A faction of the young India is rising fearlessly in demand of ‘independence’ from this oppressive notion. Nilanjan Dutta writes on the Independence Day in these dark times.

In a country where more than half the population is under 25, it is worth a while to ponder how the independent minded young women and men perceive their present environs. The United Students’ Democratic Front, in a statement issued on 27 February 2016, had said:

Be it Dadri or JNU or Jadavpur [University] campus, our freedom of expression is facing brutal attack every day. Even the last fig-leaf of so-called secularism is falling off. Progressive scientific outlook is being attacked. All avenues of rational and cerebral intellectual exercise are being obstructed. The bodies of Dabholkar, Pansare, Kalburgi and Rohith Vemula lie like corpses of our own awareness and sensitivity, as question marks on our intelligence, conscience and consciousness. 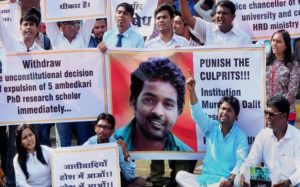 During the long spell of student movement at the Film and Television Institute of India, Pune, in 2015, graffiti appeared on a wall on the campus, quoting from Albert Camus’ The Outsider: “The only way to deal with an unfree world is to become so absolutely free that your very existence is an act of rebellion.”

This concept of cerebral freedom is alien to those who are accustomed to think only in terms of retaining or losing territory — be it physical or intellectual. Given that this is something alien, the only response they know is to attack it. 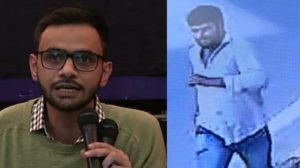 Two days before Independence Day 2018, student leader Umar Khalid was shot at during the day in a posh, busy area of New Delhi. Ironically, the programme he had come to attend at Constitution Club, in front of which the attack took place, was titled ‘Khauf Se Azaadi’ (Freedom from Fear), organised by a coalition called ‘United Against Hate’. The bullet missed him, but Khalid later confided that at that instant he was overwhelmed by the thought of Gauri Lankesh, the fearless journalist assassinated in Bangalore last year. In a statement, he said, “And two days before 15th August, the question also is what does “freedom” even mean if the citizens of this country have to be ready to die for their “crime” of just being vocal against injustice?”

Before the incident, a right-wing don had texted Khalid’s former campus comrade Shehla Rashid, “Just shut your mouth or we will shut your mouth forever. Tell Umar Khalid and Jignesh Mewani also.”

Who could say with certainty that it was an empty threat? Besides Gauri, CPI leader and historian Govind Pansare of Maharashtra as well as rationalists Narendra Dabholkar and M.M. Kalburgi of Karnataka have been killed in the past few years. And the gunshot that ringed out near the Constitution Club on 13 August afternoon affirmed that it was indeed real.

But bullets are not the only weapons of the dons of darkness. “For the past few years, like several female journalists critical of the Hindu nationalist politics and government, I have been targeted by an apparently coordinated social media campaign that slut-shames, deploys manipulated images with sexually explicit language, and threatens rape,” writes the indomitable investigative journalist Rana Ayyub in one of her recent columns.

One need not be as “famous” activists as Umar, Shehla or Rana to become targets of the silencing onslaught. We can take a few examples from last year.

Eight Lucknow University students, members of the Samajwadi Chhatra Sabha, were arrested on 7 June 2017. They had participated in a protest complaining that while the university refused to release funds for academic programmes, it funded a function inviting the new chief minister to the campus. They were reportedly carrying black flags to demonstrate before the chief minister’s convoy. The students were denied bail as they were accused of serious offences: unlawful assembly, rioting, assault or using criminal force against a public servant and criminal intimidation. 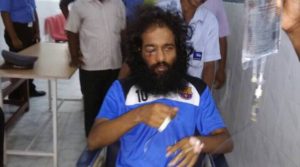 On the evening of 28 May, some 60 to 70 students had organised a discussion on the beef ban issue on the Himalaya lawns at IIT Madras. Cooked beef was served at the event. At night, one of the participants was threatened by a group of right-wing students. The next day, another student was threatened. At lunchtime the day after, two other students were attacked in front of the mess. One got a severe eye injury and had to be admitted to a hospital.

On 27 May, members of the Bhagat Singh Chhatra Morcha of Banaras Hindu University and Students for Change of IIT BHU held a joint protest at the university gate against the attack on Dalits in Saharanpur during a visit by the chief minister. They were abused, kicked, punched and arrested violently. After another round of reported thrashing at the police station, six of them were charged with joining an assembly that was likely to disturb public peace. However, they were released on bail after their fellow students laid siege to the police station. 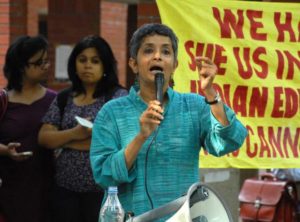 Earlier, in February 2017, there were violent assaults on the academic community by right-wing groups at Jai Narayan Vyas University, Jodhpur, and Ramjas College, Delhi. At the former, their ire was directed at an academic seminar in which Prof. Nivedita Menon of JNU was invited as a speaker. Bowing before their pressure, the university authorities even suspended Rajshree Ranawat, an assistant professor in English department and an organiser of the seminar and lodged a complaint with the police against Prof. Menon. At Ramjas College, the violence erupted over a seminar which had Umar Khalid and Shehla Rashid on the panel.

Reacting to these incidents, the All-India Forum for Right to Education, a body of academicians, appealed “to all democratic sections of the country, especially the students, youths, teachers and non-academic staffs of universities and colleges to take a serious note of this systematic pattern of attacks and resist this with all their united might”.

What is the “systematic pattern” that is emerging from the episodes we have noted above? As far as the last two are concerned, the right-wing forces did not want teachers or students from JNU to address their counterparts on other campuses, since they had identified JNU as a hotbed of “anti-national” politics. But in the case of others, there is no such alibi. It is just that they are not ready to tolerate any questioning of the authorities they revere and represent, any difference with the beliefs they embrace and extend and any deviance from the lifestyles they espouse and encourage, even if it involves something as personal as food habit.

It is this set of authorities, beliefs and lifestyles that constitute the ‘national’ for them. The ‘nation’ is what they think it is. Anyone who thinks differently is ‘anti-national’. It is precisely this strait-jacket notion that the young Indians are demanding ‘azadi’ from. We must heed their call as we count yet another Independence Day.

Nilanjan Dutta is a journalist and human rights activist.