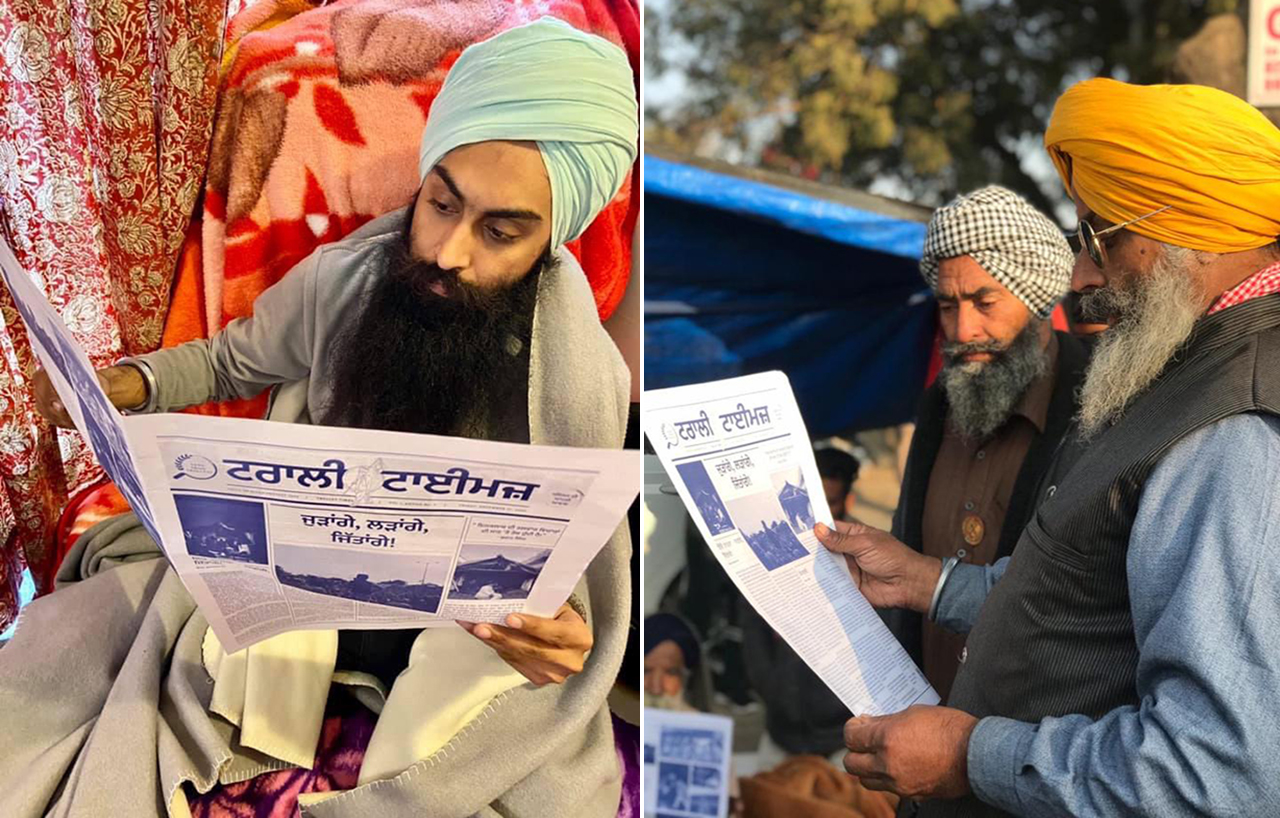 Lesson of the historic Farmers’ Movement : Developing alternative people’s media — a necessity to save Indian democracy

Alternative people’s media has now become a necessity to save Indian democracy which is under great jeopardy. The farmers’ need for an alternative form of media was acute because traditional media has misrepresented the farmers’ demands and struggles beyond a point they could correct and clarify, writes Shivam Mogha.

In 2020, India witnessed a historic farmers’ protest in which farmers mainly from Punjab, Haryana and some other parts of the country joined hands together to protest against agricultural laws passed in the parliament in quite an unparliamentary manner; no debate was allowed on the issue and stakeholders were not consulted in taking this decision. This resulted in discontent amongst the farmers and their unions, consequently the first round of protests erupted in the state of Punjab against the laws. Haryana and parts of Uttar Pradesh later joined them. The second round of protest was more comprehensive and visible as the farmers reached Delhi settling in at the borders to the capital city braving a plethora of hurdles. Farmers stayed there with very passionate rigour for almost a year till the movement won its main demand i.e repeal of the three laws in parliament, but the government betrayed the farmers by not accepting their other demands as promised.

The farmers’ movement provided a blueprint for a successful protest whose spirit was missing in the country especially after BJP came to power in 2014. Every protest against the Narendra Modi government was seen as a protest against the country itself and some sections of the society were targeted for not being the nationalist enough; every protest concerning them was handled by the government in a very brutal manner. Mainstream media played an important role in demonizing all dissenting voices, but when the farmers’ movement started, it pierced the maze of false narratives weaved by mainstream media (Godi media) and countered them with their own narratives. This aspect of providing an alternate narrative was very unique to the farmers’ movement because the arguments given by the farmers and their unions were received positively on the ground. This success comes at a time when the freedom of the press remains seriously curtailed in the nation, and populist sentiments gyrate towards exclusivist, sectarian and communal representation of reality. Information is twisted and manipulated to serve the interest of corporate media houses in league with the ruling BJP government; no longer is the media working as the fourth pillar of democracy in India. Indeed, we are living in times where truth is being constructed using the media as an instrument for advancing state propaganda.

As we know, the government had a vested qualitative interest in giving no value to the farmer’s protest, with attempts towards delegitimizing it. On the one hand, the union ministers had labelled the farmers “misguided”, “motivated by separatist sections” or “anti-national”; the PM himself called (also coined the term) those associated with the protests as andolanjeevis, branding the farmers and their support base as enemies of the state. On the other hand, the prime-time news-shows and debates telecast by popular mainstream media houses were brimming with stories of unfounded allegations such as the “Khalistani angle” of the protest, or questioning the ability of the farmers to speak in English, wearing jeans and eating pizzas. It is a matter of small wonder because the state anyway wants to keep farmers so very poor they do not eat what they produce. The statements by the ministers were backed by the narrative propagated through these media houses — a systematic distortion and stigmatisation of an empathetic perspective to demands of the farmers. Although there were other independent media houses, news channels, freelance journalists and local reporters who tried to challenge these claims and present the real picture, their output was limited due to the fact that they cater to a larger canvas of news. However, what was missing from the public debate was a very important and central voice of the protest i.e. of the farmers themselves.

The complete absence of people’s voice from the media forums and misrepresentation of any issue that asks accountability from the BJP and its leaders has led to new alternative media practices in recent times in India which arise out of the need to protest this monopoly over distribution of information.

Alternative people’s media has now become a necessity to save Indian democracy which is under great jeopardy. Challenging the narrative of the government was possible only when farmers expressed their experiences to speak, articulate, argue and present their conditions of existence and demands. The need was not simply to present the “real” in front of the country as it deterministically formed our reality, but also to construct, define and transform that reality for and with the protesters themselves. The farmers’ need for an alternative form of media was acute because traditional media has misrepresented farmers’ demands and struggles beyond a point they could correct and clarify. Journalists from mainstream media channels were seen grilling farmers on the technicalities of the farm bills. While expecting every protestor to be aware of all the particularities of the law is bizarre, an independent media was an indispensable requirement for the movement to communicate information and strategies amongst the farmers and the people.

The need for an alternative people’s media

Protests are sites of collective actions and do not sustain on their own. There are multiple factors functioning in a complex process driven by different agents to make it successful and one among many agents is the media. But, the mainstream media, in their unabashed practice of crass yellow journalism, started putting forward multiple claims and conclusions which were far from the farmers’ actual stance in the larger debate. This could have created chaos amongst protesters, further besmirching public perception of and reaction to the protest, digressing public debate away from the original issue.

People who were part of the protest at the borders were also keen on bringing out the “real truth” of the farmers’ struggle. An independent channel by and for the protesters as a mode of communication was required to further allow dialogue between the decision makers — the leaders of various Kisan Unions present at the protest; and between the leaders and common farmers sitting at the protest site as an interpersonal mode of representing activities happening around them. A communique in the language of the protesters led to the genesis of an alternate channel of media, arising out of the means and necessities as well as energies of people involved in the movement.

It is in this backdrop that the Trolley Times emerged. A newspaper that resulted out of necessity, founded by people with no prior media experience, but an experience driven by a farming background. There were no ulterior motives or hidden agenda, but to provide an honest and clearly articulated documentation of the aims and demands of their protest.

The newspaper introduced— the discussions taking place among the various leaders of the farmers ‘movement, the on-ground stories of protestors from different protest sites, views of common farmers on policies concerning them— to the public debate.

It not only questioned the government and the mainstream media, but also covered issues concerning caste, class and gender within the movement. What is unique about the media emerging from social movements and especially Trolley Times is the fact that it does not treat its readers as consumers but rather as participants who are supposed to engage with the news. The news is therefore so personal to their lives that protest media channels derive immense power to actually shape its readers’ worldview, making them question their existing views and drawing their attention to the earlier non-existent aspects of the movement.

A newspaper of the protestors utilised the media strategically as an organising force. An authentic newspaper run by the daughters and sons of farmers and other volunteers challenged the narratives dominating the public debate that stigmatised the movement.

My engagement with Trolley Times

I come from Muzaffarnagar district in Western Uttar Pradesh; an area where kisani is not just an identity but also a social consciousness. The kisan movement and its politics has a dominant presence and is seen as quite influential in this region. Historically, Choudhary Charan Singh, Mahendra Singh Tikait, and Ram Chandra Vikal had such a strong charisma among the people in Western UP that Baba Tikait was able to establish the Bhartiya Kisan Union with the support of farmers from all over India. West UP became the epicentre of farmers politics; this was the region where farmer’s organisations were not just unions but active political pressure groups. They also led many socio-political movements, and it was through them that I became involved in societal issues and began to engage with the social world around me. In 2011, when Baba Mahendra Singh Tikait died, the area saw the dismantling of the village bhaichara. I have witnessed the 2013 Muzaffaranagar riots and was part of the rehabilitation team working for the settlement of people affected by the riots. This was the time when I saw a change in nature of the very idea of ‘secular’ politics of BKU which splitted into many factions and there was no revival of the same Kisan-ness, until BKU (Tikait) organised a tractor march in 2017. Then the historic farmers movement started in 2020. It was first started in Punjab and soon garnered support from all the unions across Uttar Pradesh. On 26th of November, farmers reached the Delhi borders, bypassing all the hurdles, I was motivated enough to join them. I was doing my masters in Sociology from JNU at that time. I went to different morchas to become part of it. I wanted people to know more about this historic moment and l therefore strongly felt the need for a newspaper which could raise the issues of the farmers and the relevance of the protest at the national level. By that time, some of our team members had already started a newspaper. I was at Ghazipur Morcha but Trolley Times started from the Tikri Morcha. I knew Mukesh and Navkiran from the Trolley Times team very well. Mukesh called me and asked me to work for the Trolley Times. Without giving it a second thought, I joined this team brimming with excitement. I think a lot has been written on the idea of Trolley Times, but what I want to emphasise here is that this newspaper has captured the people’s imagination and became the active voice of the farmers’ protest. Every social and political movement has a historical legacy to tell and this is what Trolley Times does. It comes from the same legacy of historical newspapers like Kirti, Jang Sayal, Gadar, Pratap, which were a part of the social and political movements of our revolutionary past.

The long but necessary way ahead

While breathing today in any social space, we get a sense that the gravity of social justice issues is getting delegitimised, and also getting threatened from the sides of a large section of mainstream media, as well as ruling party-supported platforms. Any social movement demanding accountability from the government is seen as “anti-national.” This should be challenged by the media on the ground, the kind of media whose relations with its readers are not injected by any corporate. Every social movement should have its own independent media platform, so that communication with the protesters and the general masses will not get twisted by government-supported agents.

Shivam Mogha is a research scholar at Jawaharlal Nehru University’s Centre for the Study of Social Systems. He was a co-editor of Trolley Times, a newsletter that emerged from and documented the farmers’ movement on Delhi borders  against the Modi government’s three farm laws.