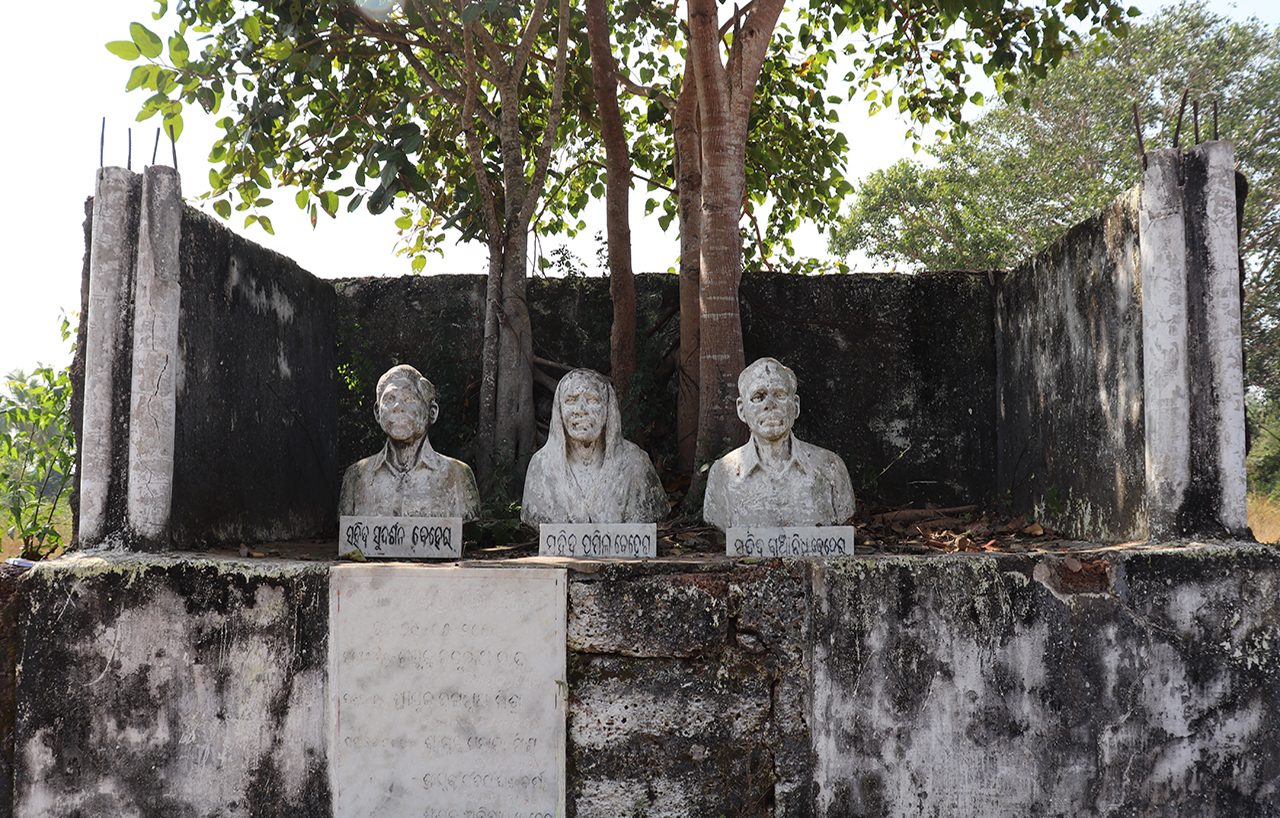 29 May marked the 23rd year of brutal atrocity by the state, in which five fisherfolk were killed in a police firing in Chilika in Odisha as the community took to direct action in dismantling illegal prawn gherries.  GroundXero publishes excerpts from Chapter 6 : Chilika Teere from the book Resisting Dispossession: The Odisha Story, written by Ranjana Padhi and Nigamanand Sadangi. The book, published in 2020, documents the struggles, based on testimonials of the people who lost their land, livelihood, culture, dignity as well as the lives of their relatives, friends and members of their community to the various government-imposed ‘development’ projects. The excerpts trace the events that led to the Sorana firing.

Three whitewashed busts under a small thatched canopy at the entry of the village remain as tragic reminder of the events of 29 May 1999. That night, Pramila Behera, Banchhanidhi Behera and Lingaraj Behera from Sorana were killed in police firing. Sudarshan Behera from Bhusandapur and Digambar Behera from Jagulipadar were also killed. When collective resistance of the fisherfolk had peaked once again, it was brutally crushed. Let’s trace the events that led to the Sorana firing, when the fisherfolk took to direct action in dismantling illegal prawn gherries.

Based on the Committee report, the Odisha High Court delivered a verdict on 23 November 1993 that upheld the rights of the fisherfolk. The Court banned prawn cultivation and held the government responsible in preventing the entry or proliferation of mafias. Nothing much changed on the ground.

On 27 June 1996, the revenue minister reported in a meeting held with the chief minister that illegal prawn cultivation was taking place in almost 20,000 acres in the districts of Puri, Khurda and Ganjam. As a result, by September, notice was served to dismantle all such illegal gherries. A programme named Operation Clean Chilika began in October under the supervision of the Puri Collector. He was in charge of clearing 14,000 acres of the total area under forcible occupation. The Sub-Collector Dharmananda Dalai, directly in charge of the operation, was transferred within 24 hours. That was the end of Operation Clean Chilika (Manab Adhikar Sangathan 1999). Yet another public interest litigation was filed in the Supreme Court by a Gandhian named S. Jagannath. On 11 December, the Supreme Court banned prawn cultivation in Chilika and ordered the dismantling of prawn farms and gherries. Next year on 5 July 1997, members of the Matsyajibi Mahasangha met a parliamentary delegation that had come and registered protest against continuing prawn cultivation and lack of access to their fishery sources.

The persistent demands of the Mahasangha to free Chilika of the prawn gherries and implement the High Court and Supreme Court orders were going unheeded by the government. The victory of the Mahasangha in preventing the sale of a portion of the Kalijai island had galvanized their energy and unity. As Anadi Behera recalls:

The collective action against the selling of Kalijai had revived our movement. In 1999, we intensified the struggle to free Chilika. People were in despair. There was no fish left. There was emptiness all around. Jana maana sunyo hoi golaa. If we were to survive, the prawn gherries had to be dismantled.

The months of March and April in 1999 saw organized resistance building up. Over 3,000 fisherfolk with 300 boats gathered to take up the clearing of the prawn gherries on their own by 24 April. This happened at Barkul:

Seeing the gathering of fishermen, the district administration of Puri and Khurda came to talk to the Sangha and promised them that the eviction campaign would begin on 28 April in Khurda and 2 May in Puri districts. But the Sangha did not swallow the sugary promises of the administration and began direct action on 24 April. They cleared around 1,500 acres of land by destroying big prawn gherries in the Krushnaprasad block. Meanwhile, it was declared that the Puri collector would come for discussion and Sangha should not take law into their hands. The administration arrested 67 fishermen and confiscated four boats at the tail end of the campaign. They were forwarded to court on charges of dacoity. On 27 April, some 5,000 men, women and children blocked the National Highway at Balugaon for five hours demanding unconditional release of arrested fishermen. (Manab Adhikar Sangathan 1999)

The cry to free Chilika of the hold of the mafia reverberated across Odisha and outside. The massive demonstration was unprecedented and made breaking news. The administrations at Khurda and Puri were compelled to dismantle gherries, but the big ones owned by the influential were left untouched. The Mahasangha announced in a press conference in Bhubaneswar that they were exhausted of the manipulations of the government and would resort to direct action again.

Our situation was becoming more and more tragic. We could neither feed our families nor move around in the waters. The local moneyed men had forcefully occupied our leasehold areas and expanded it more. They would take over 20 to 30 acres. The gherries would sometimes stretch up to 5 km from the village boundary. Chilika Matsyajibi Mahasangha appealed to the government, the district administrations and everyone who mattered. We appealed to the courts for remedial measures. Nobody heard us. Gradually, the resentment smouldered more and more compelling us to take direct action. In 1999, representatives of 145 villages met and decided that we need to demolish the gherries ourselves. When our leaders gave the call, we all rose up in unity. Our lives depended on freeing Chilika. We were ready to risk anything to stave off starvation. The Mahasangha intimated the district collectors of Khurda, Ganjam and Puri. They began their operation from Balugaon and destroyed some gherries in the Parikuda area. After the second day of operation, we halted at Sorana in the evening to decide the future course of action.

On 29 May 1999, the people cleared up 1,000 acres and destroyed 11 big gherries belonging to Baradihi, Nairi, Tarapi, Baulabandha and Balia of Khurda district. Around 11–11.30 pm, the District Collector along with police forces reached Sorana. They woke up the leaders who were fast asleep and threatened them not to continue the operation. The leaders replied that they began this operation as the administration did not do anything. They were forcibly put into police vans. Word spread that the leaders were being taken away. As the news spread, people woke up from their sleep and rushed to block the vehicle in which their leaders had been held captive. They blocked the path of the vans and a terrible clash ensued.

A woman named Magi Behera in Sorana who was present that night narrated:

After the day-long anti-gherry operation led by Mahasangha, our leaders were resting in a room. Food was served for the people who had participated in the operation. Suddenly, 10 vehicles with armed police along with mafia reached the spot. They arrested the leaders and took them away. As the leaders called out to the people, hundreds of people came and blocked the vehicle in which our leaders were kept. There were women and children and the elderly too. In the darkness, police lobbed teargas shell and opened fire. The mafia sprayed chilli powder and glass powder loaded in small pipes all over us. With our bodies hurting and eyes blinded, we crawled to block all the vehicles. We saw Pramila Behera of our village lying on the ground hit by a bullet on her thigh and writhing in pain. We bandaged her wound with a piece of cloth. As we moved ahead, we found three more people. They seemed dead. When police tried to take our leaders, we started beating up the police. They used lathis on us. Then they left with the dead bodies and our leaders too. It was the administration that killed and incarcerated us, yet we were held guilty and had to face police charges for years.

It was not just the police that descended upon them that night. There were men who were brought in by the non-fisherfolk or mafia. The two terms are interchangeably used. The police began using lathis, hurled tear gas shells and opened fire! Four people died on the spot. And another person died after four months of being hit by a bullet on his chest. Sixty seven people were arrested, slapped with false cases and later released on bail.

Mahadev Behera from Sorana from the Matsyajibi Mahasangha recalled:

At that time the CM Giridhari Gomanga declared Rs 100,000 compensation for the deceased and Rs 20,000 for the injured. Till date, Lingaraj Behera who died after four months has not received the compensation and his mother has been approaching me since then. The government set up an enquiry committee headed by P.K. Tripathy and suspended the Collector. After some time, the Collector got a promotion. And the Commission concluded the killing to be justified and held the deceased responsible! This is the justice done to us!

Pramila Ghadei, a CPI (M) activist, was eager to share about the protest against the police firing:

We went for the rail roko programme in Bhubaneswar. Around 2,000 women participated in it. It was mostly women. We packed some food and went to Bhubaneswar a day before the programme. We stayed overnight on the platform. Around 6.30 or 7 am, we sat on the rail lines and did not allow any train to pass. We occupied the tracks and refused to move. It continued for three hours or so. Soon, the police arrived. They persuaded us to withdraw. But our leaders and CPI (Liberation) leaders insisted on continuing. Finally, more police arrived and started lathi-charge around 11 am. People ran here and there out of fear. Many people had their legs and hands broken. They were taken to hospitals. We reserved buses and came back home late at night. I could barely move for days as one of my joints was injured.

Everybody was shocked. The CM Giridhar Gomango was quoted in newspapers, he admitted that he was ‘kept in the dark about the incident.’ That reflected the combined power of the district administration along with the upper caste and business sharks. They had come to rule Chilika. The lake that sustained the fisherfolk, the dolphins and myriad other creatures, with legends of its power to protect itself and its people, stood helpless when corporate greed and state oppression gripped it with its tentacles. The mythical flock of flamingos could perhaps only capture the imagination and scare away lesser evils. This was a whole new beast altogether. And Chilika was gasping for breath.

We are thankful to the authors and the publisher, Palgrave Macmillan, for granting us permission to reproduce the excerpts from the chapter on Chilika Teere in the book for our readers. The paperback edition is available with Aakar Books.