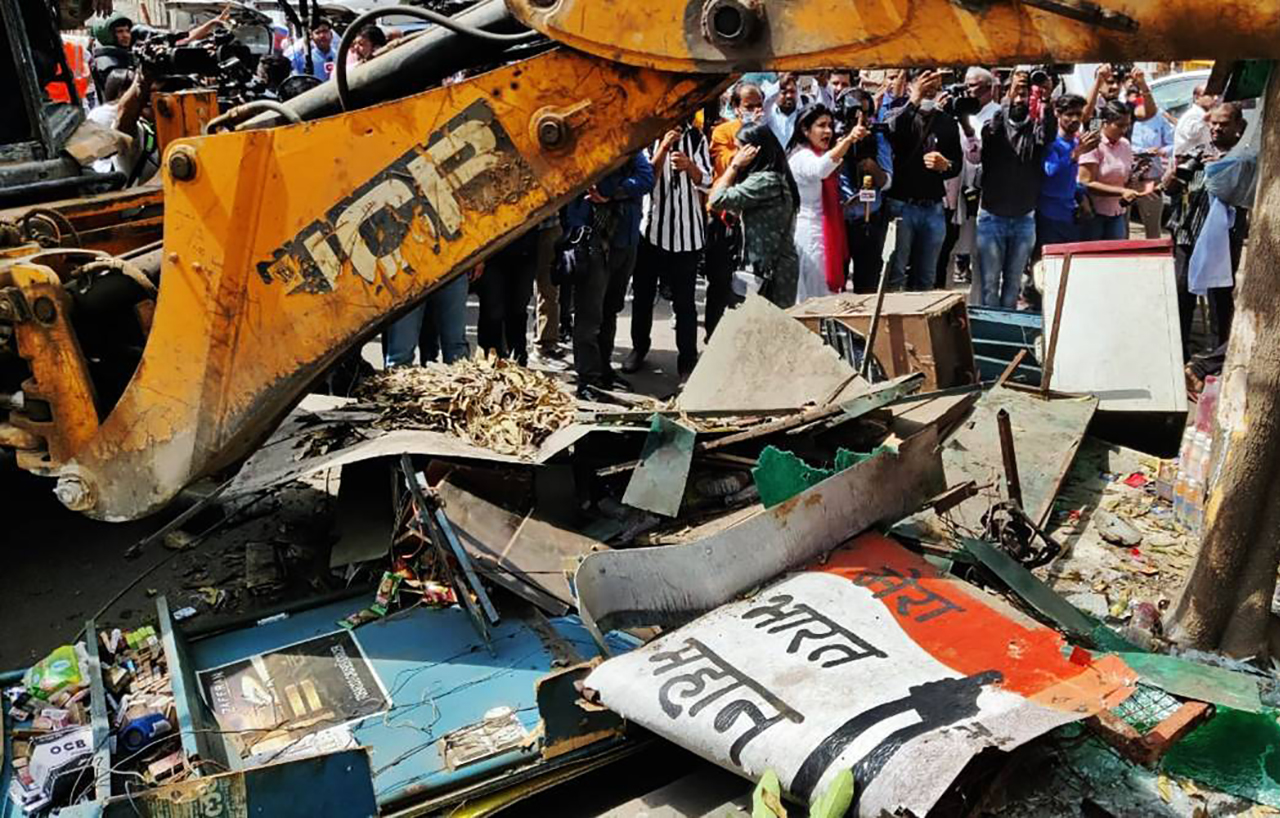 The demolitions at Jahangirpuri in Delhi is a curious case of communalization of eviction, where almost every house and property that were destroyed, belonged to the Muslims, while the Hindu property and temples remained more or less intact. This communalized encroachment upon housing rights has diluted minority substantive citizenship claims to a great degree, with each new demolition or step towards privatization is met with little to no resistance. Lack of resistance on the part of the civil society at large, in such cases is no shock, as through deliberate withdrawal of the state with the post-1990s turn towards neoliberalism globally, a consensus has been created over the erosion of the public good, writes Shambhavi Sharma and Shourya Majumder.

The Jahangirpuri demolitions on 20th April were a sort of culmination of the new face of BJP-RSS’s anti-Muslim rhetoric, which has been unfolding since the Hijab ban controversy in Karnataka. Following a spate of communal violence in different states across North India during Navratri, the ruling regime has taken to the old script of blaming Muslims themselves for the violence. However, in case of the Jahangirpuri demolitions, the state has taken to a different albeit oft-used script of illegal encroachment to justify its actions. Reporting over the incident has shown that the demolitions were targeted towards the Muslim community, while temples and Hindu property in the area were left untouched.

It is no surprise that the past two campaigns of the Sangh Parivar have hidden behind values of secularism, uniformity and legality to deny Muslims the right to education and the right to housing. Thus, it is imperative to ask today, what has led to the complete hollowing out of these rights which were once seen as substantive elements of the fundamental right to life enshrined in the Indian constitution. While the RTE Act of 2009 and several Supreme Court judgments on housing have read these rights as fundamental as part of Article 21 of the constitution, their formal adoption has been repeatedly weakened through neoliberal government policies which erode the very basis of the idea of rights and public good itself.

The hijab ban row along with Jahangirpuri demolitions show that today’s fascist regime relies on a language which is in stark contrast with fascism as we have recognized it historically. While earlier fascism has been characterized by a blatant negation of the right to life, the image of the Nazi concentration camp symbolic of such an order, today we are seeing an attack on hollowed out rights which substantively make the right to life negligible. On the other hand, so-called fringe and criminal elements of the Sangh have routinized violence towards minorities and dalits. Thus, legality and criminality have been deployed together to do the work which was once the sole domain of a totalitarian state.

Let us take the case of the ‘hijab ban’ in Karnataka pre-undergraduate colleges. Under the Bharatiya Janata Party-led state government in Karnataka, the entry of Muslim students and teachers wearing headscarves or the hijab was restricted in February 2022. This was done by, first, vigilante groups associated with the ruling party inciting majoritarian hostility on campuses and, then, the state government retrospectively citing provisions in the Karnataka State Universities Act, 2000 regarding prescribed uniforms in public schools. This was challenged before the Karnataka High Court for discrimination against ‘essential religious practices’. The court ruled in favour of the state government and, in effect, the vigilantism which led to the de facto ban.

What we find here is that exclusion of targeted religious minorities from public life, a hallmark of fascistic regimes, has been couched in the language of ‘uniformity’ in education. The de jure adoption of a fundamental right to education has been de facto nullified through rapid privatization, now being fast-tracked through the provisions of NEP 2020. Gross enrollment ratio for Muslim girls was at a mere 15.8% prior to the ban. Additionally, an AIFRTE report from 2016 shows that despite committing to provide education to all, of the children admitted in class 1, only about six percent of STs, eight percent of SCs, nine percent of Muslims and ten percent of OBCs are able to complete schooling till class 12. This means that more than 90% of these sections already stand outside the ‘shrinking’ public education system.

In a similar vein, while Supreme Court rulings over time have read Right to Housing as part of the right to life, and various policies have been drafted to ensure relocation and resettlement in case of demolitions of slums, such demolitions have continued on a routine basis, in the name of weeding out encroachers or even in the name of upholding environmental laws as was the case in Khori demolition last year. Additionally, state laws require the authorities to give prior notice before demolitions. Both provisions, of resettlement and prior notice, were not followed on the 20th. A fact-finding team of COLLECTIVE visited the site on 21st April. Most residents in the area are registered voters of Delhi and have authorized electricity connections. In addition to the demolition of the mosque, major loss of property and income has been incurred by Muslim shop owners in the area. Majority of the inhabitants had in fact been resettled in Jahangirpuri by the government itself in 1975, thus calling into question the use of illegality for the demolition and eviction.

This encroachment upon housing rights has diluted substantive citizenship claims to a great degree, with each new demolition or step towards privatization being met with little to no resistance. Lack of resistance in such cases is no shock as through deliberate withdrawal of the state with the post-1990s turn towards neoliberalism globally, a consensus has been created over the erosion of the public good. Beginning in the 1980s, neoliberal policies were enforced globally through various trade agreements such as the WTO-GATS, wherein adoption of such policies was made a precondition for developing nations to avail development aid, loans and foreign trade. The neoliberal adage of individual freedom and hard work has now taken firm precedence over any role of the state in providing dignified conditions of life and work.

The BJP-RSS recourse to emptied-out democratic ideals of secularism and legality must be exposed for what it truly is – a steadfast march towards a fascist order. The future of any resistance to this onward march cannot rely only on legality as it exists today, rather the realm of legality must be expanded beyond its neoliberal confines. At every step, we must ask for the substantive implementation of citizenship rights, if we are to avoid slipping into upholding the right to life in its present empty and hollowed-out form. The language of rights provided to us by the constitution must not be allowed to be eroded by the twin forces of neoliberalism and fascism today. It is only through organized movements and resistance that new life can be breathed into Indian democracy, towards ensuring an expansion of the Right to Life in its truest sense.

To read our fact finding report on the Jahangirpuri demolitions, visit the following link: shorturl.at/eiF89