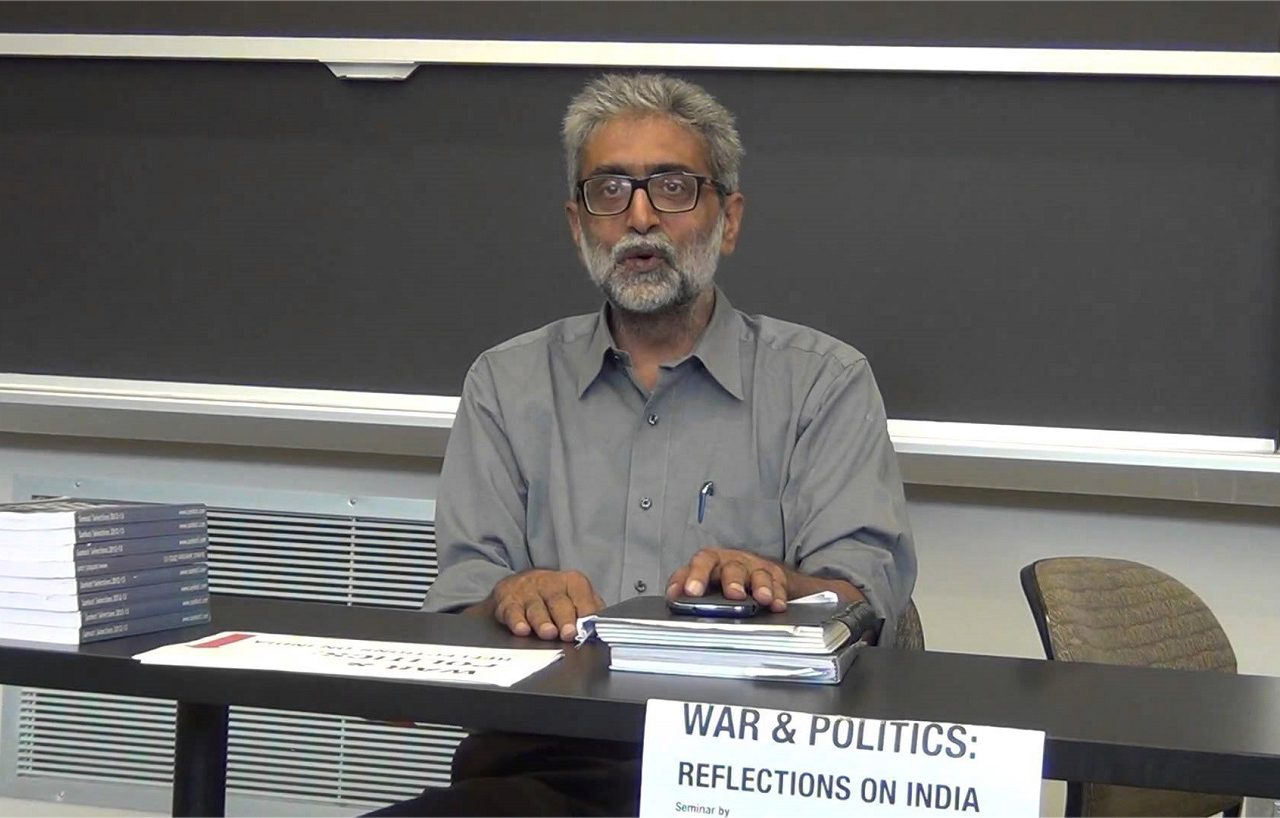 When the Process becomes the Punishment

When the Process becomes the Punishment

14th April 2022 marks the completion of two years of PUDR activist Gautam Navlakha’s surrender before the NIA. One of sixteen accused in the infamous Bhima Koregaon case, Gautam has been imprisoned in Taloja Central Jail, Navi Mumbai since 25 May 2020.  For more than six months now, since 12 October 2021, the nearly 70 years old Gautam, an undertrial suffering from multiple health problems has been in solitary confinement in one of 33 cells in the ‘anda’ circle, the High Security Area of Taloja Jail, a space meant to segregate those guilty of heinous crimes.

The day before Gautam surrendered he wrote the following lines, of which he has become living proof :

I can now begin to face the actual legal process, which accompanies cases where provisions of Unlawful Activities (Prevention) Act are invoked. Such Acts turn the normal jurisprudence upside down. No longer is it the axiom that ‘a person is innocent unless proven guilty’. In fact, under such Acts, ‘an accused is guilty unless proven innocent’.

Draconian provisions of the UAPA are not accompanied by stricter procedures regarding evidence, especially electronic, considering the stringent punishment provided for under the Act; the procedures, which otherwise provide tighter rules regarding evidence, are instead made elastic. Under this double whammy, jail becomes the norm, and bail an exception. In this Kafkaesque domain, process itself becomes punishment.

My hope rests on a speedy and fair trial for myself and all my fellow co-accused.

Two years have passed since then, but the trial that Gautam and the other co-accused were hoping would start has yet to begin.

The point made by Gautam about process becoming punishment in cases where the accused are charged under provisions of the UAPA, cannot get more real. No case of pretrial incarceration could be starker than that of 83-year-old Stan Swamy who passed away on 5th July 2021, after being denied bail and medical treatment, asking to be allowed to return home.  Gautam, too like Stan and several of his co-accused has had to approach the courts for the most basic rights beginning with receiving a replacement pair of spectacles when his earlier pair broke. Gautam has very poor eyesight but was forced to do without spectacles for over a month.  Currently Gautam’s request for a chair because of severe back-pain too is pending even as his petition for house arrests on grounds of his poor health and age is before the Bombay High Court. Confinement in the anda circle, a concrete area with no greenery and sunlight, limited space and segregated from the rest of the prison has been physically and mentally exhausting.  Gautam has had to approach the Sessions Court to get permission to step outside the anda circle which allowed him to do so only as recently as 15 March, after 5 months of solitary confinement, for 30 minutes daily! On 5th April it came to light that Taloja Jail had twice refused to hand over a PG Wodehouse novel citing “security reason”. This was however not the first time that books and letters addressed to him have been returned.

The NIA has opposed Gautam’s petitions for bail, medical relief etc. vehemently at every juncture citing prima facie guilt, and the jail authorities have ensured that Gautam is “punished” even while guilt still has to be proved.  The NIA court has repeatedly relied on evidence that at times has been presented in sealed envelopes to deny regular bail. It seems immaterial that suspicion has been cast over the entire case by the evidence of hacking of Rona Wilson and Surendra Gadling’s computers found by Arsenal, and the absence of the alleged plan to assassinate the Prime Minister in the chargesheet filed. Moreover the NIA has still not provided to the accused cloned copies of the files containing the “incriminating evidence “despite several applications.

It is ironical that the Taloja Jail authorities who are mandated otherwise to protect inmates awaiting trial, have clearly been working in tandem with the NIA,  to ‘punish’ Gautam even before guilt is proven and judgement pronounced.  All the instances mentioned above amount to “soft torture”, a term coined by Stan Swamy to describe the insidious nature of coercion exercised by authorities against prisoners in custody. Repeated denial of medical bail by NIA courts begs the question as to whether being implicated in a case such as Bhima Koregaon, divests an accused of other legal rights , such as the right to life , due to all prisoners? Looking at the number of times that Gautam has had to approach courts for relief on being denied services and routine items by jail authorities, this definitely seems so.