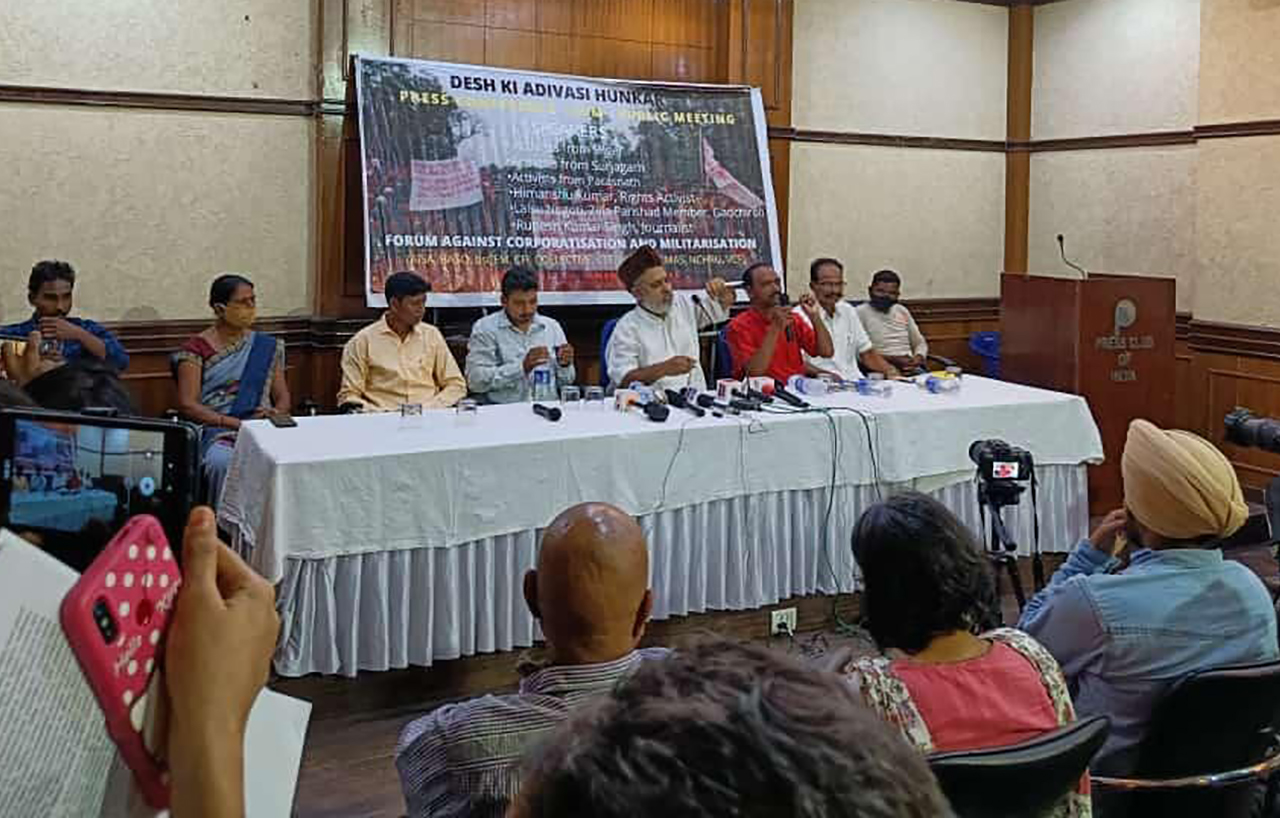 Public Meeting by Forum against Corporatisation and Militarisation

First speaker Sainu Gota from Gadchiroli, Maharashtra addressed the conference saying that any dissent against Iron Ore Mining in Gadchiroli is met with brutal repression from the state forces. Forty thousand acres of land is being grabbed for the iron ore mining in Gadchiroli alone. He said that the livelihood of adivasis is completely dependent on the forest and the paramilitary forces harass people when they go to collect the forest produce.

Lalsu Nogoti, Zilla Parishad member of Gadchiroli said that the primitive tribes are always targeted. He said that no constitutional provisions like PESA and other laws belonging to 5th and 6th Schedules are negated completely and land is being grabbed for big mining projects benefiting the corporates. Additionally the entry of big corporates means entry of paramilitary forces who harass, torture, rape, kill adivasis in fake encounters. In 100 villages, around 25 people have been charged with UAPA. He also said that there are adivasis who are incarcerated for years in central Indian states. He also spoke about how Gondi as a language is being suppressed in the Gondwana region. He also mentioned that their demands are not being heard and that is which prompted them to come all over to Delhi to speak.

Raghu from Moolvasi Bachao Manch, Silger spoke next. He said that there is immense repression by the state forces daily at the protest sit-in against the setting up of a police camp in Silger. He said that all the assurances given by the government are proving false. Tens of adivasis are being picked up by the police and are charged with false cases by branding them as Maoists. He said that the violence and atrocities on adivasis have been going on for years. Even the people who were celebrating Constitution Day were arrested under flimsy charges. He made an appeal for the media to write about Silger and the ongoing anti camp resistance there.

Gajendra from Moolvasi Bachao Manch, Silger addressed the conference next. He said that the roads and camps are nothing but to destroy the adivasi culture in the name of development. He said that the adivasis also need development but not at the cost of their land, natural resources and culture. He mentioned that the protestors are being threatened by the police and administration by losing false cases and death threats. He himself along with Raghu, another leader of the Silger movement, were stripped and beaten up by the police for five days which resulted in severe injuries.

Anil Kisku from Jharkhand Jan Sangarsh Morcha spoke on the anti camp and anti mining resistance that is going in various parts of Jharkhand. He said that innocent adivasi youth are being picked up and killed in the name of ‘Encounter’ by the paramilitary forces. In the Parasnath mountains of Jharkhand, tens of police camps are being built. He said that the Police do not even inform the families of those they detain or arrest. He described an incident whereby one individual was detained by the police and falsely implicated in a case. In Dholpatta, in 2017 June, a person named Motilal Baske was killed by the security forces, and was described as a Maoist. When it was publicies in the media, people checked and it was found out that he was no Maoist.

Rupesh Kumar Singh, independent journalist from Jharkhand spoke about Operation Samadhan – Prahar. He said that like Operation Green Hunt, the Indian Government is waging a new war against Adivasis of central and eastern India for looting the mineral rich land. He spoke about the immense militarisation that is underway in various parts of the country under this operation. He spoke on the unholy alliance of the central Government and state government of Jharkhand in silencing the voices of adivasis protesting against setting up of police camps and looting the natural resources of Jharkhand. He said that any one who speaks against the anti people policies of the government and the capitalist loot is branded as a Maoist and targeted. He said that this new policy of operation samadhan is to clear the way for big corporates to loot the vast natural resources.

Himanshu Kumar, prominent Gandhian and Human rights activists spoke about the abuse of power by paramilitary forces in Chhattisgarh and various other states like Jharkhand and Maharashtra. He started by talking about the way in which Muslims were made to be terrorists because the areas they lived in had oil. Similarly, he said, the Adivasis face the attack of the government because they live in areas that are mineral rich. He said that the most number of paramilitary forces are in Adivasi locations, to capture the minerals. Not for the development of the poor, but for the capitalists. He said that a perennial war is going on against the people in central Indian states, comparing it with the Ukraine – Russia War.  He said that Gandhi had once said if the English model of development is deployed in India, it would lead to destruction. Because that model says the one who has more, is more developed. One can only have more by violence.

The biggest war that the Indian state is engaged in is the war against its own people. He also said that this violence will reach us as well and will not stay limited to the Adivasis. The issue is related to the environment and hence will affect everyone. The Adivasis are currently preventing it.

Forum against Corporatisation and Militarisation – Delhi