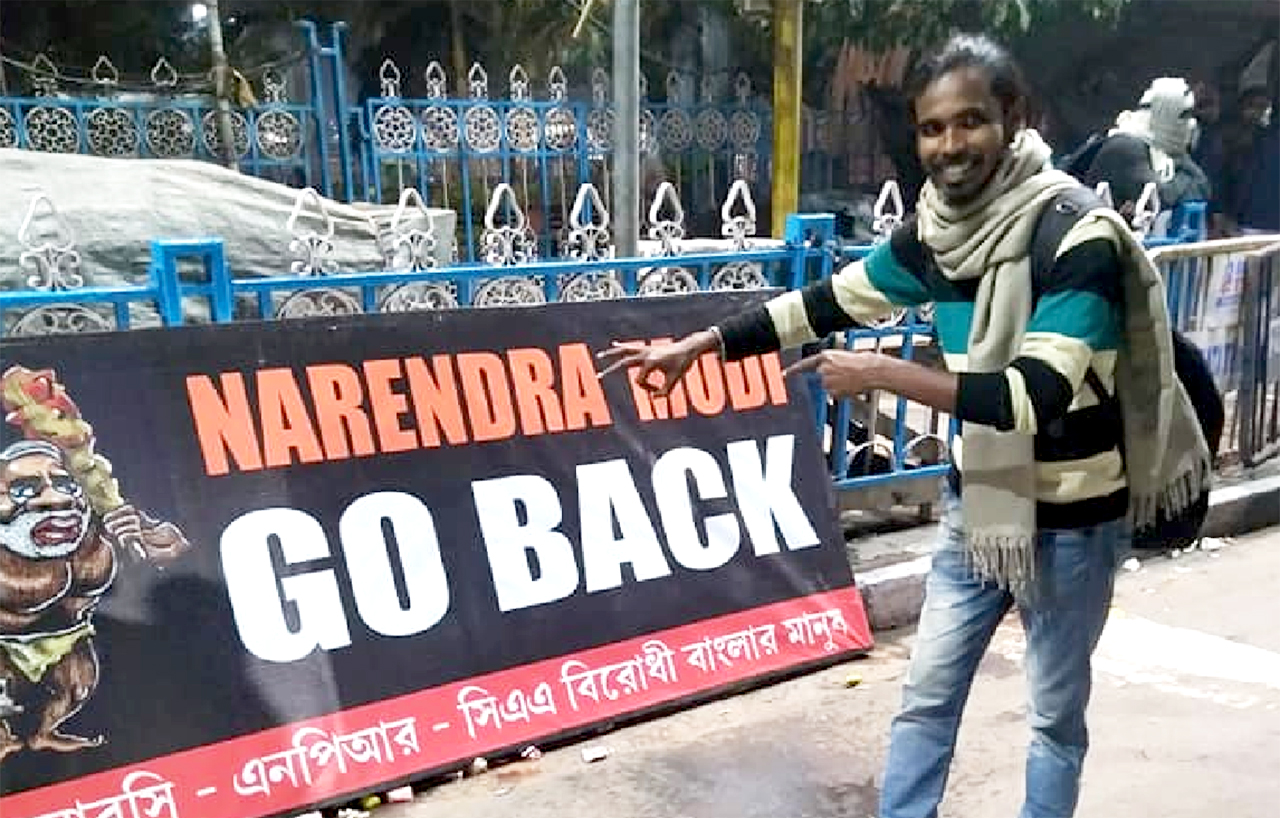 Bengal has a history of glorifying political violence. Killing, torturing and threatening political opponents have become normalised in West Bengal. Mamata Banerjee’s  rule has taken this culture to new heights. In today’s Bengal, if one tries to organize people politically against the ruling party, oppose the local TMC-land mafia-police nexus, protest against police inaction and brutality, if one demands one’s rights, one might be simply silenced forever  – like Anish. A GroundXero report and commentary. 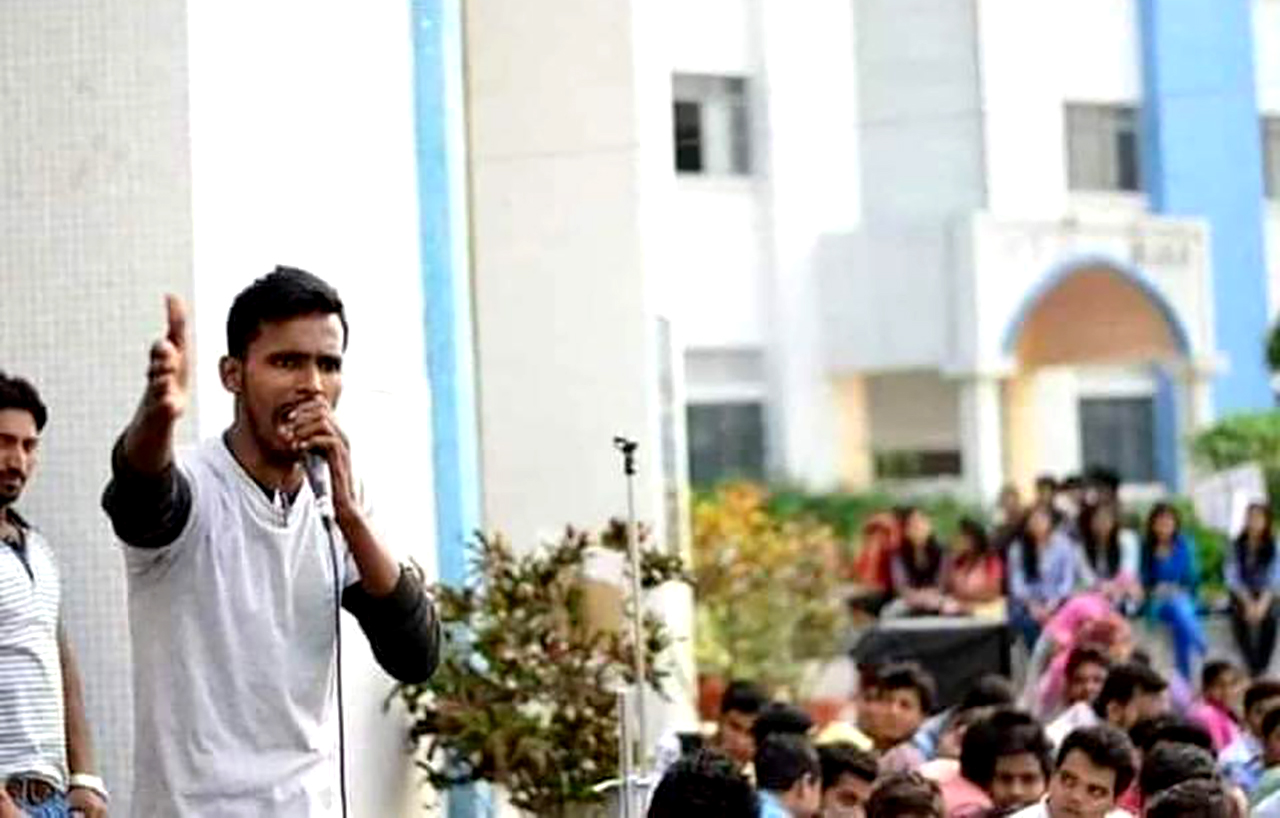 Anish Khan, a 28 year old MBA student of Aliah University and a social movement activist was murdered on Friday night. As had been reported by his family members, he was thrown off from the roof of his house in Amta block of Howrah district of West Bengal. According to their reports, a few men dressed in civic police uniform barged into their residence that night around 12.30 am. They came looking for Anish, found him and after torturing him, threw him off from the roof of their three-storied house.

Salem Khan, father of Anish, lodged an FIR on 19.02.2022 in the Amta Police Station, holding the persons dressed as policemen responsible for killing his son. He wrote, “They deliberately killed my son. I don’t know their names, but will surely recognize them.” As per the FIR, “a few persons dressed as civic police from Amta Police station began to  create a ruckus outside our house, they started kicking at our main door, and were calling me by yelling my name. I woke up hurriedly, and saw a few persons dressed in civic policemen’s dresses, armed with guns, and with no woman police, threatening to shoot me down if I didn’t open the door. Scared of my life, I opened the door and they barged inside, pushing me down. They tore down the mosquito net, where the women of the house were sleeping, and kept abusing and asking where Anish was. They were using highly indecent language and even physically assaulted our women. Finding Anish, they dragged him upstairs, repeatedly thrashing him, and killed him. To hide evidence, his body was thrown down from the roof. Crying and shouting we ran and found our son dead.” 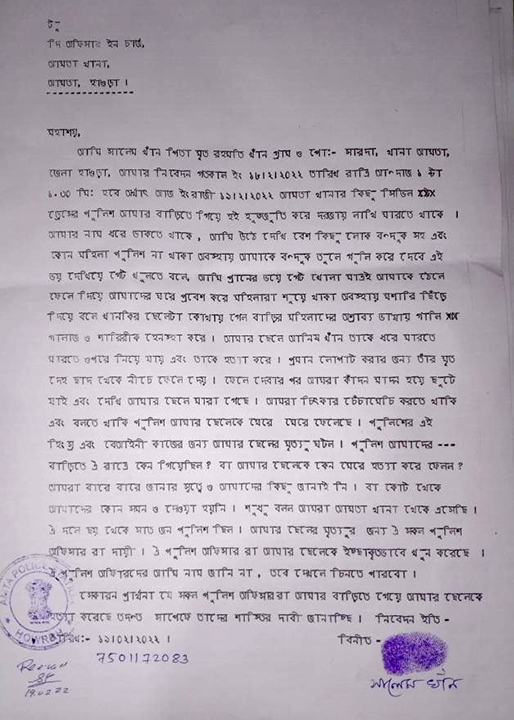 Copy of the FIR lodged by Anish’s father

Salem further wrote in the FIR – “Why did the police go to our house that night? Why did the police thrash and kill my son? They didn’t tell me anything even after my repeated pleas? Nor were any summons from court shown. They only said we have come from Amta PS.“

So far, the Amta Police has denied that any personnel from the forces had gone to Anish’s house on that night. Soumya Roy, SP, Howrah rural, said if the policemen had gone to his house, they would have brought him to the police station. Then who killed Anish? It it were not policemen, who can have the audacity to dress in police uniform and carry out such a heinous murder and simply fled away? It needs no James Bond to figure out the involvement of local toughs who are hand-in-glove with ruling party leaders.

Anish’s activism and political beliefs had put him in conflict with local TMC leaders and hooligans. Anish has been on the streets against the fascist RSS-BJP; he also raised his voice against various immoralities and injustices of the ruling TMC party in the state. His activism was not confined to walking and participating in rallies and protests in only Kolkata and Aliah University campus. He opposed various misdeeds of the TMC in his local area, and was actively engaged in mobilizing people against them. 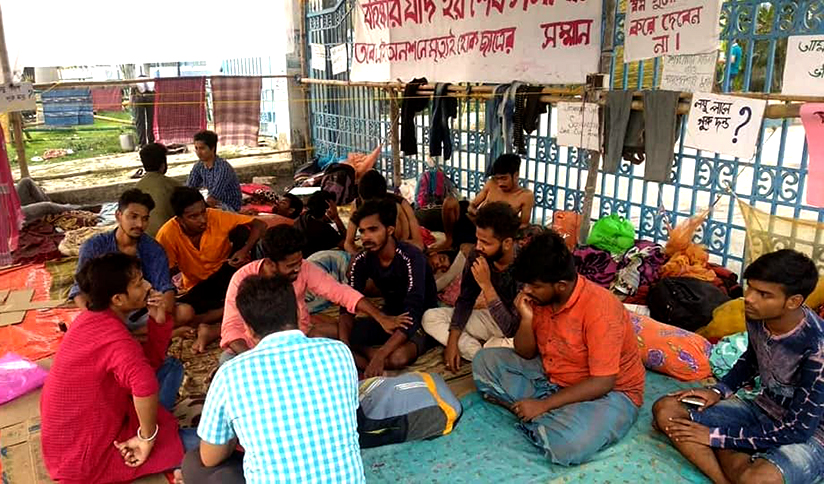 Anish sitting on a hunger strike at Aliah University

Anish was one of the primary organizers of the ongoing student agitation against various irregularities, and corrupt practices of the university administration in Aliah. He played an active role during the anti-CAA/NPR/NRC movement, and was a regular at the Park Circus protest almost from its very inception. During his college days, he was a member of Student Federation of India (SFI). Staunchly anti-BJP and anti-communal, Anish had also worked for the Indian Secular Front (ISF), and was a regular face in various protest rallies on pro-people issues. During the pandemic, the 28-year old had protested against the local nursing homes in his area fleecing people for profit, and was involved in organizing protests, demanding reduction in hospital charges. 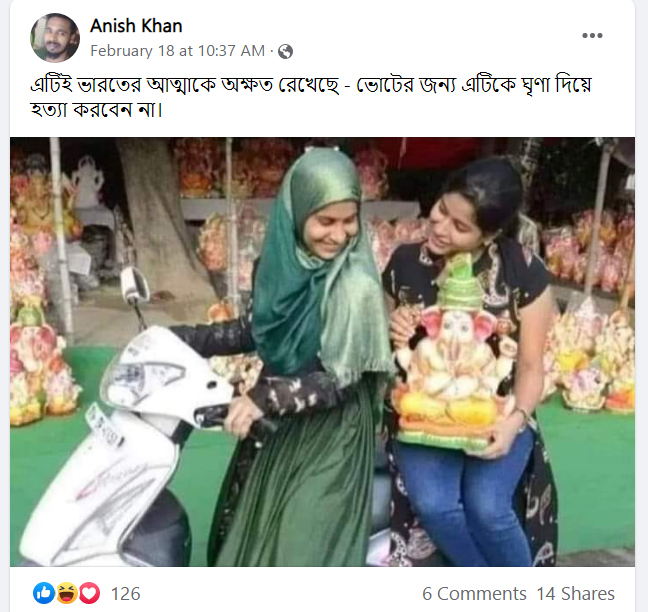 He has been threatened many times. In reality, Anish had become an eyesore to the local ruling party leaders and goons. Anish knew of this, and apprehended some form of retaliation to his opposition to the ruling party. A letter, written by Anish, to the Officer-in-charge of the Amta Police station and other state officials dated 24th May, 2021, has been circulating on social media. In this letter, Anish had drawn attention of the authorities about the danger that he felt had been posed to his life, and that of his family members’ and property from local TMC goons. He had mentioned an incident of how his efforts to organize a blood-donation camp in the locality had led the local TMC to threaten him and his family with dire consequences. As usual no action was taken on his complaint. 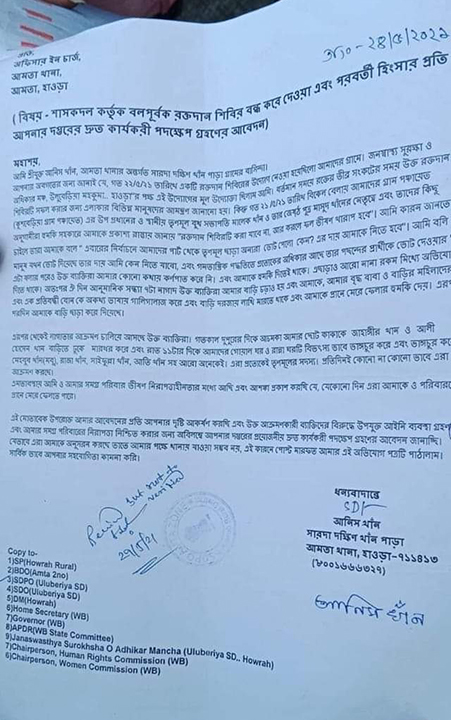 The letter that Anish wrote informing police about the threat to his life.

The police who sit and stand on the orders of the ruling party leaders can’t be expected to provide him security. Nor can they be relied upon to investigate his brutal murder in a free and fair manner. The top ruling party leaders have already floated the theory of a ‘great conspiracy’ to defame the state, government and their party. So it won’t be surprising, if the police instead of booking the real culprits starts looking for the ‘conspirators’.

The brutal murder of Anish and the way he was killed has shocked and rattled the political class and civil society at large. His killing is a chilling reminder of the state-party terror unleashed on leftist youths during the 70s of the last century. As news of his murder became public, on Saturday evening, students from Aliah University and other activists took out a candle light rally from the varsity campus in Park Circus, and blocked the busy seven-point crossing.

As is the norm, the opposition party leaders have condemned the murder. Communist Party of India (Marxist) politburo member Md. Salim described the incident as one of the most “gruesome murders” of a student leader in the state in decades. Leader of the Opposition and BJP MLA Suvendu Adhikari has blamed the police for the incident. CPI (ML), West Bengal State Committee, in a statement had said, the Mamata government must take responsibility for this brutal murder and file a murder case against the police, and has demanded a judicial inquiry into Anish’s murder. ‘Bengal against Fascist RSS-BJP’, a platform which launched the ‘No Vote To BJP’ campaign during the last assembly elections, has also demanded the immediate arrest of Anish’s killers and appealed to the people to speak out against the heinous murder.

Bengal has a history of glorifying political violence. Killing, torturing and threatening political opponents have become normalized in West Bengal. Mamata’s rule has taken this culture to new heights. In today’s Bengal, if one tries to organize people politically against the ruling party, stand against the local TMC-land mafia-police nexus, against police inaction and brutality, if one demands one’s rights, one might be simply silenced forever — like Anish.