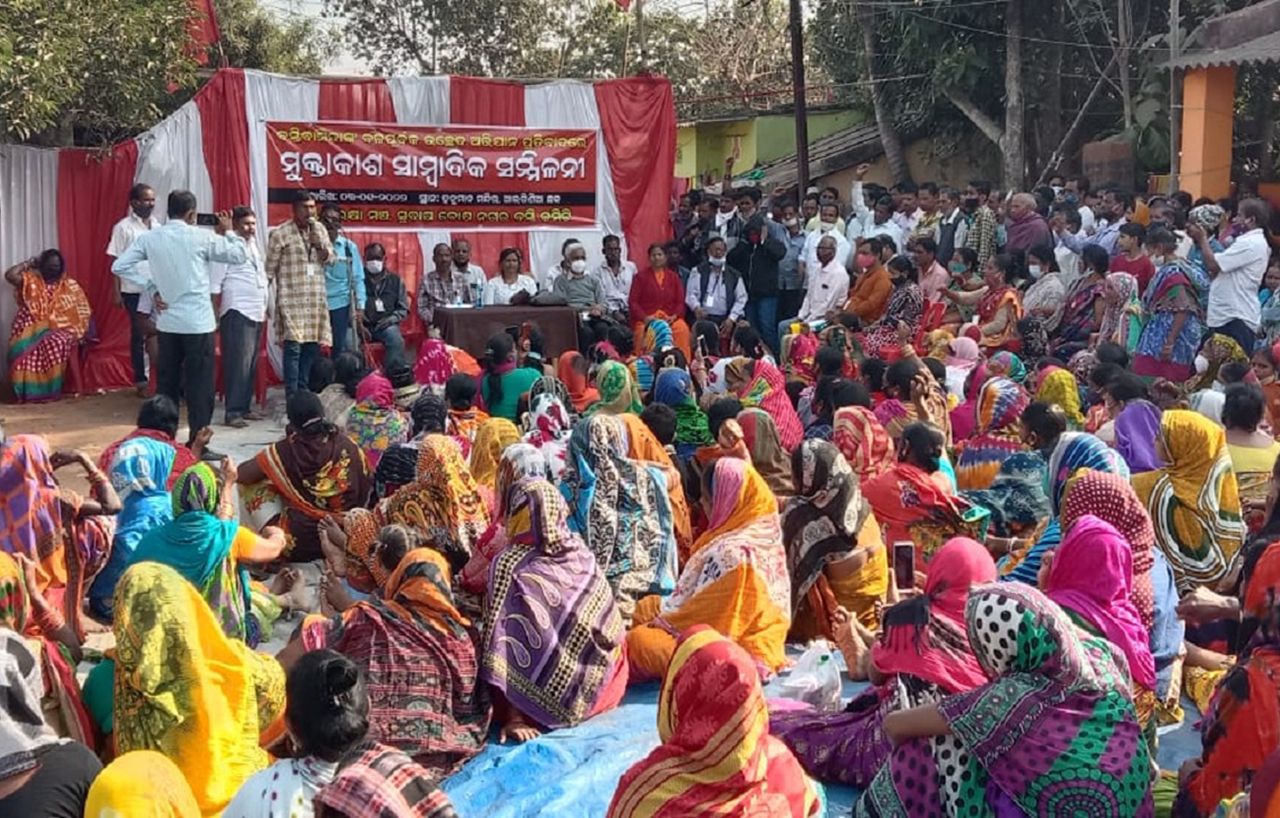 On 3rd January, 2022, over 2000 slum dwellers, mostly women, gathered to meet the press in Bhubaneswar to bring to public attention, how the policies and statutory rights acknowledged by the Odisha state government for slum redevelopment are not implemented in any measure on the ground. Unfortunately, the presence of mainstream media was negligible on an issue affecting the “life line” of the city – the labour of those who keep the city running. Therefore, this report is made for Groundxero by the activists on the ground to bring to the attention of wider public, the promises made by the BJD-led government in Odisha and the reality of the situation. 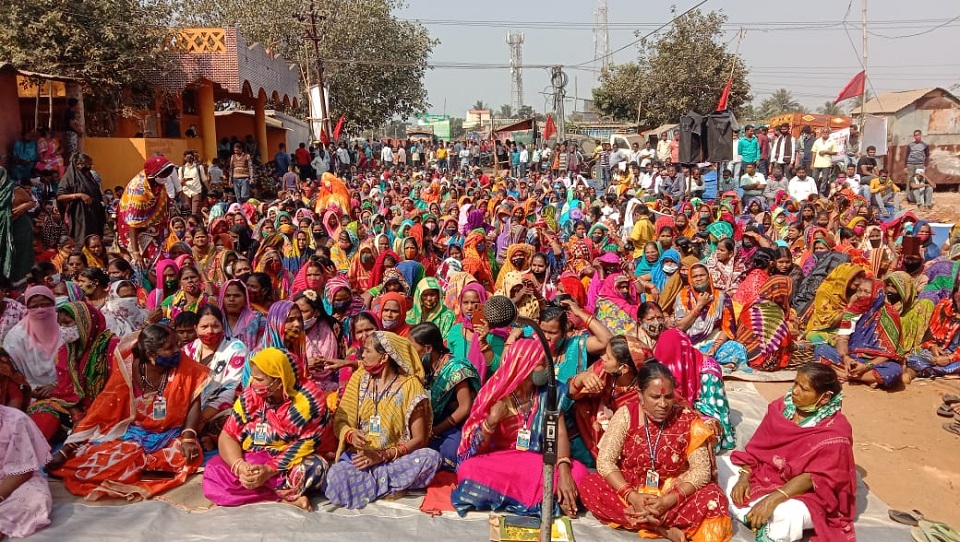 From the 2003 Odisha government policy of developing slum areas to the 2017 policy of declaring “slum dwellers as the lifeline of cities and towns” to win the confidence of slum dwellers that they have every right in the cities and towns they live in; the Odisha state government has declared another policy on 31st of December 2021. In this context, to let the urban poor, working class people and the people of Odisha in general know the truth of these declared policies, an open-air press meet by Basti Suraksha Manch (Odisha) and Subash Bose Nagar Basti (Dumduma) was held at Subhash Bose Nagar Basti on 3rd January, 2022. People from other slums joined in the programme. Thus, over 2000 slum dwellers, mostly women, gathered to meet the press.

Slum dwellers asked in the press meet whether all slum dwellers have been provided pucca houses as declared by the Prime Minister in 2014. There was a provision for “tenable slums” which means development work will be carried out on the land of slum dwellers without demolishing their slums in Section 21 of the Odisha Corporation Ordinance 2003. That Ordinance was passed as the Odisha Corporation Act 2003 and the rights of slum dwellers had been recognised. However, while on one hand slum dwellers got legal rights, on the other, in the very next year in 2004, the administration went on to demolish the Subash Bose Nagar Basti. A strong and spirited protest campaign of the people halted the demolitions.

All of us are well aware of how the state Cabinet on 10 August, 2017 took the decision to accord land rights to slum dwellers. The Corporation Amendment Act, 2017 was passed to provide basic facilities and development measures to slums. The passing of the Act in the State Assembly legally acknowledged the property rights and the right to access basic facilities and civic amenities in city areas.

The largely rural population migrates to the cities in search of better lives through economic opportunities; the victims of the current development model that makes people homeless and robs them of their land and resources also come to cities for livelihood. But lack of affordable housing areas, skyrocketing land prices, and the hazards in urban development planning contribute in the formation of slums in Odisha and across the entire urban landscape in India. Thus, the population that dwells in slums is largely of the working class that does back-breaking labour to keep all essential human activity in towns and cities running with meagre income and abysmal living conditions.

The residents of Subash Bose Nagar Basti have been living here for 30 years or more. Most of them are daily wage labourers, domestic helpers-workers, construction workers, small vendors, rickshaw pullers and drivers.

As citizens of this country and as per the above-mentioned laws, we have an absolute right to minimum housing rights to be able to live with dignity. We are shocked that on 3rd December 2021, the Bhubaneswar Municipal Corporation (BMC), Bhubaneswar Development Authority (BDA) and State Housing Board authorities threatened openly to demolish the slum. We all know what a terrible night it was as the weather department had announced heavy rainfall and all precautions were being taken to ensure safety and protection to people in anticipation of a cyclone. Even then on December 4, the day of the cyclone, with all our resolve and united strength, we forced the government agencies to go back. 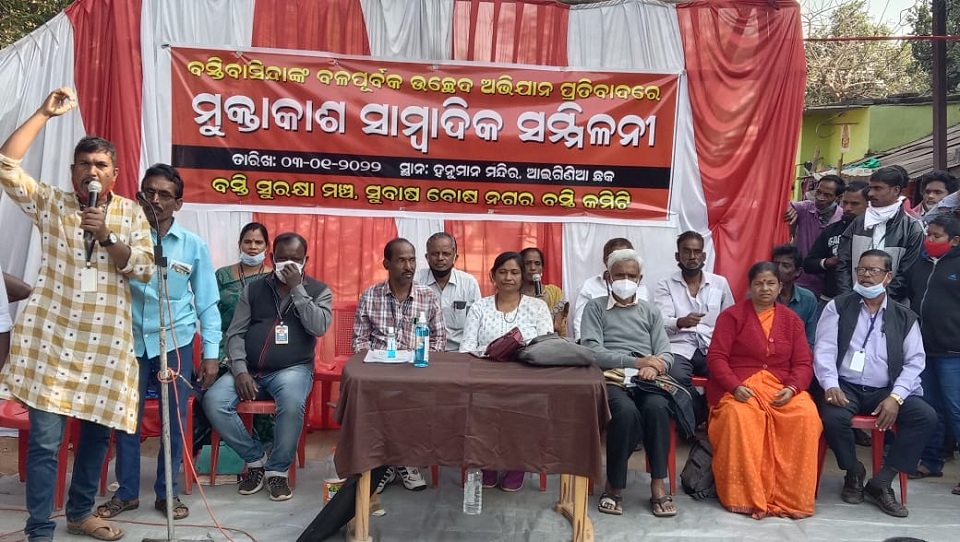 We can never forget the attack by the agencies to demolish the slum in April 2017. Thousands of people of Subash Bose Nagar marched and gheraoed the BMC office in July that year demanding to stop slum demolition and provide housing rights near the workplace.

We won the amended 2017 Corporation Act that established land rights to slum dwellers. From 2017 until the end of 2021, representatives of Basti Suraksha Manch from Subash Bose Nagar Basti have met with the local MLA, Minister, the Chairman of the Housing Board and held discussions in various phases. Despite the verbal assurance of housing rights given to slum dwellers each time we meet, this sinister move was made to demolish the slum on December 3 2021. Such an act on the part of the municipal authorities is not only illegal, it is undemocratic, anti-people and criminal.  While everybody was safe in their houses that day, slum dwellers were forced to sit in dharna for 24 hours on 4th December 2021 while the cyclone was going on. This dharna was attended by the President and Secretary of Basti Suraksha Manch and of various slum leaders and mass organisations. From Sanjukta Kisan Morcha to the leaders of CPI (ML) Red Star, and from Congress to BJP, all have come to this dharna and expressed support for the demands of the people of Subash Bose Nagar Basti.

The government stands exposed by attempting to demolish the slum on the stormy day of 4 December on one hand and making a false declaration for slum dwellers on 31 December. This declaration is also a smoke bomb like the erstwhile declarations and laws for slum dwellers. We have seen from the ground reality how the ordinances of 2003 to 2021 are nothing but a gimmick to hoodwink the slum dwellers, snatch their lands and give it to the corporations, private builders and land mafia. It is a criminal conspiracy. 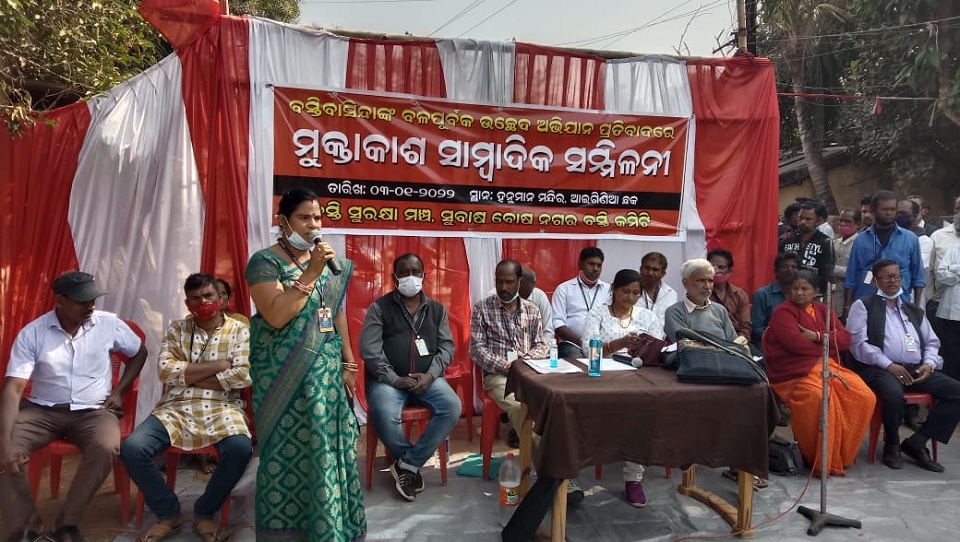