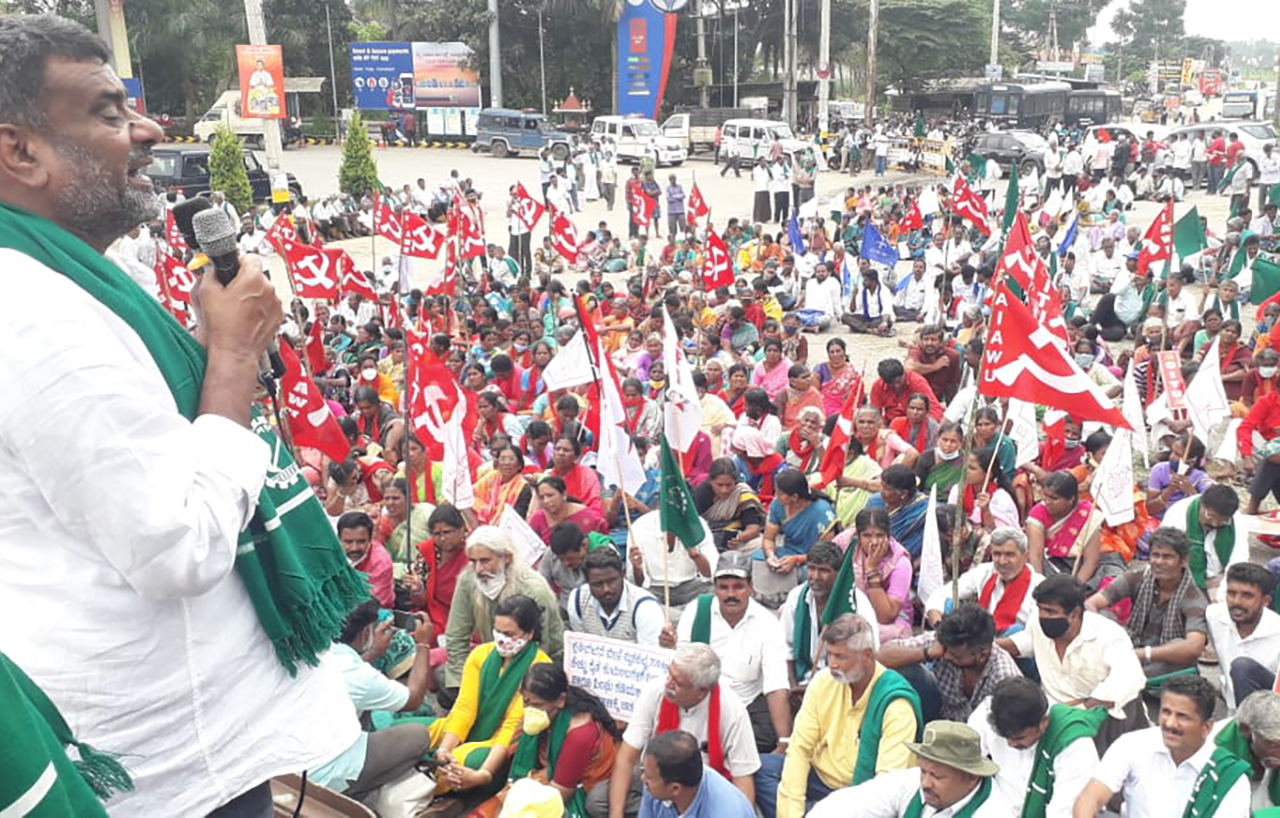 Karnataka farmers unions come together, block highways across the state

Farmers’ unions, mass organizations and left political parties across the country are observing this 26 November by holding solidarity programs in the form of rallies, demonstrations, blockades etc. to mark the completion of one year of the farmers’ movement on the Delhi borders, demanding repeal of the three pro-corporate farm laws enacted by the Union government in September last year. Besides, expressing solidarity with the protesting farmers camping on the borders of Delhi, the day is also being celebrated as ‘victory’, though partial, of the farmers movement, as the Prime Minister rattled by the year long movement, ultimately, on 19 November, announced his decision to completely withdraw the controversial laws in the Parliament’s winter session, scheduled from 29 November.

While solidarity and protest programmes are going on in different parts of the country, the farmers’ unions and other organizations in Karnataka, under the banner of Samyuka Horata – Karnataka, as a part of Samyukta Kisan Morcha (SKM), today, blocked key highways at about 20 different points across the state. Along with showing solidarity with the 6 demands put forward by the SKM in an open letter to the PM after the repeal of the laws were announced, the protesters in Karnataka are also demanding that the BJP ruled state Government of Karnataka repeal the anti-farmer ordinances and laws that it has passed, including the recently amended Land Reforms Act, APMC Act and the Karnataka Prevention of Slaughter and Preservation of Cattle Ordinance, 2020.

Karnataka and Uttarakhand were among the BJP ruled states which brought in their own laws based on based on the Union government’s controversial farm laws.  In December last year, the BJP government in Karnataka passed the  Karnataka Agricultural Produce Marketing (Regulation and Development) (Amendment) Bill, 2020, its own version of the Centre’s Farmers’ Produce Trade and Commerce (Promotion and Facilitation) Act, 2020, which sought to modify the APMC law. It also came up with a law to liberalise land as part of its “agricultural reform”. The Karnataka Land Reforms (second Amendment) Act, 2020, was also passed in September 2020 amid much protest from farmers in the state.

The PM’s sudden announcement to withdraw the three farm laws on 19 November has caught the Karnataka government completely unawares and ‘confused’. J.C. Madhuswamy, the state’s law and parliamentary affairs minister said, “While we need to discuss the amendment to the APMC Act with the Union government, we will not withdraw the land reforms act since it is a state act and will have no impact from the union government’s decision.”

The farmer unions and opposition parties in the state, however, are demanding the state government to withdraw all the legislation enacted to facilitate corporate penetration of agriculture sector in the name of ‘reforms’. This is more so, after the Modi government, unnerved and rattled by the political fallout of the year long farmers’ movement, on the eve of upcoming crucial assembly elections in UP and Punjab, has now decided to take back the controversial laws.

Farmer leaders including Kodihalli Chandrashekar, Badagalapura Nagendra and Kuruburu Shantakumar amongst others had requested the people to join their protests and co-operate with the farmers.

In Bengaluru, the protest started with a public meeting, where activist and writer BT Lalita Nayak read out the preamble to the Constitution at Maurya Circle. This was followed by a bike rally from Maurya Circle to Srirangapatna by Karnata Janashakti, which was flagged of by farmer leader Kavita Kurugunti. 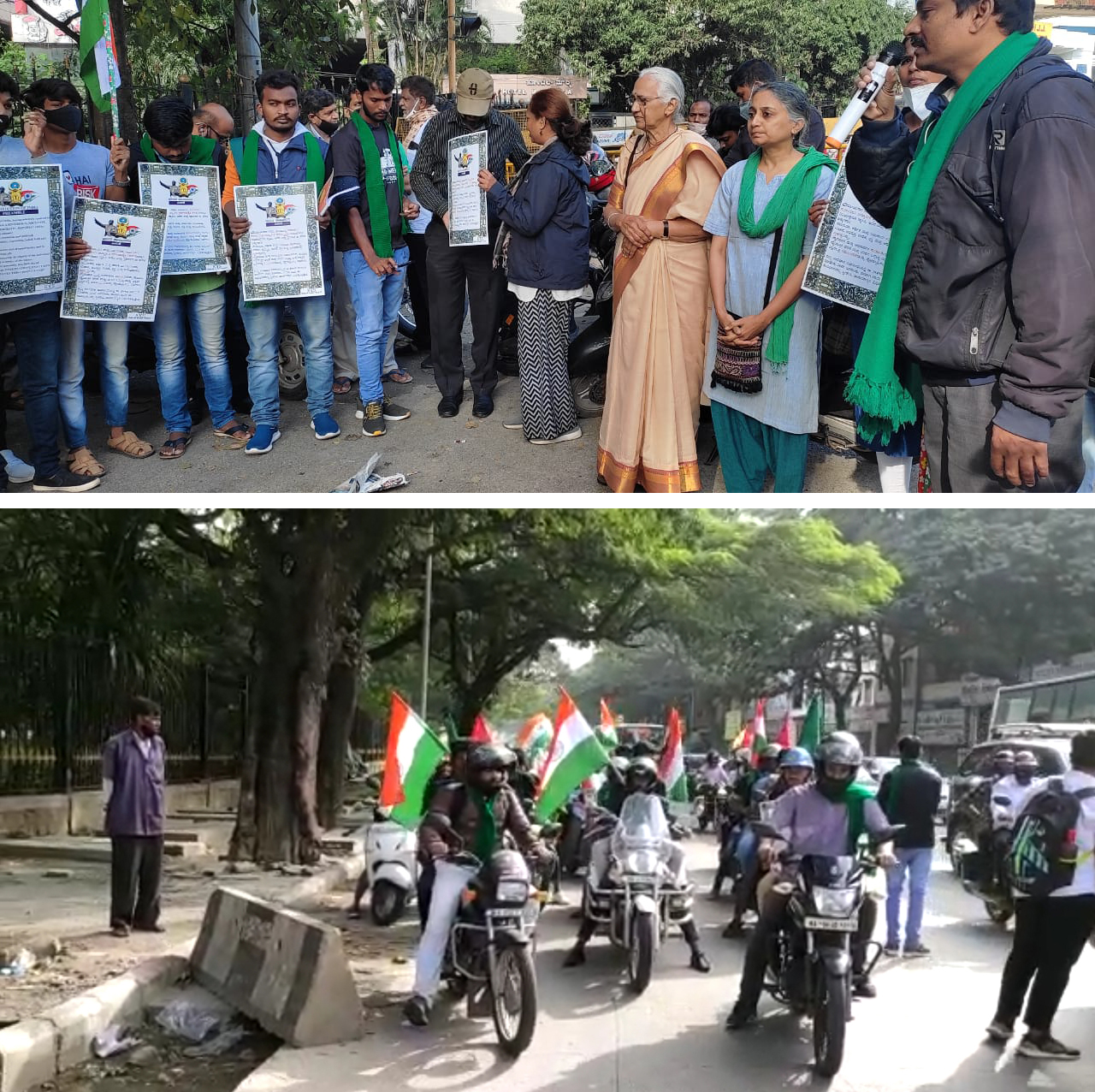 The sit-in by protesters at Srirangapatna on the busy Bengaluru-Mysore highway was accompanied with songs and music. 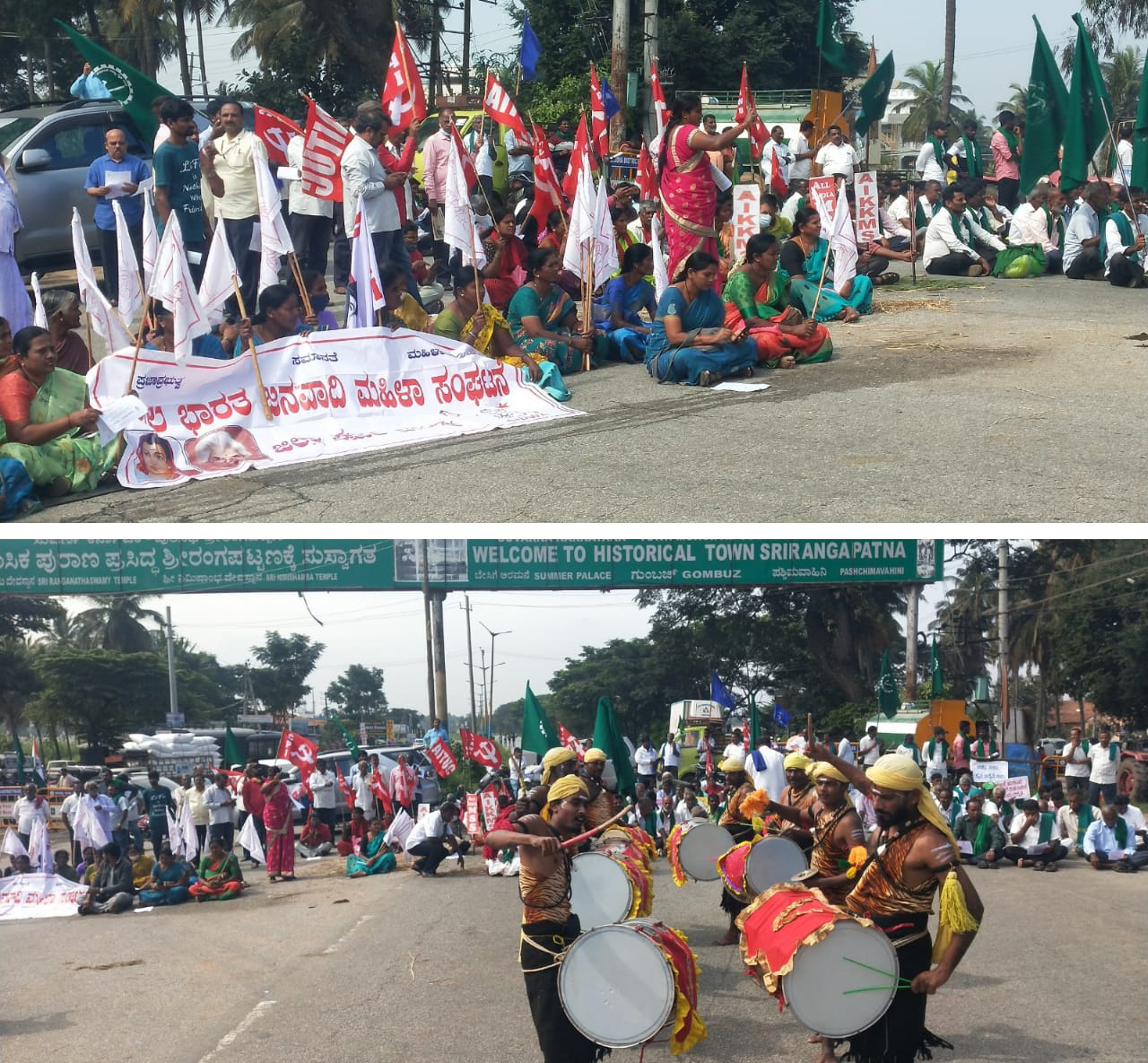 In Vijaypura-Bhagewadi, women took the initiative to block the NH toll plaza.

In Chikballapur, farmers marched in tractors to block the highway. 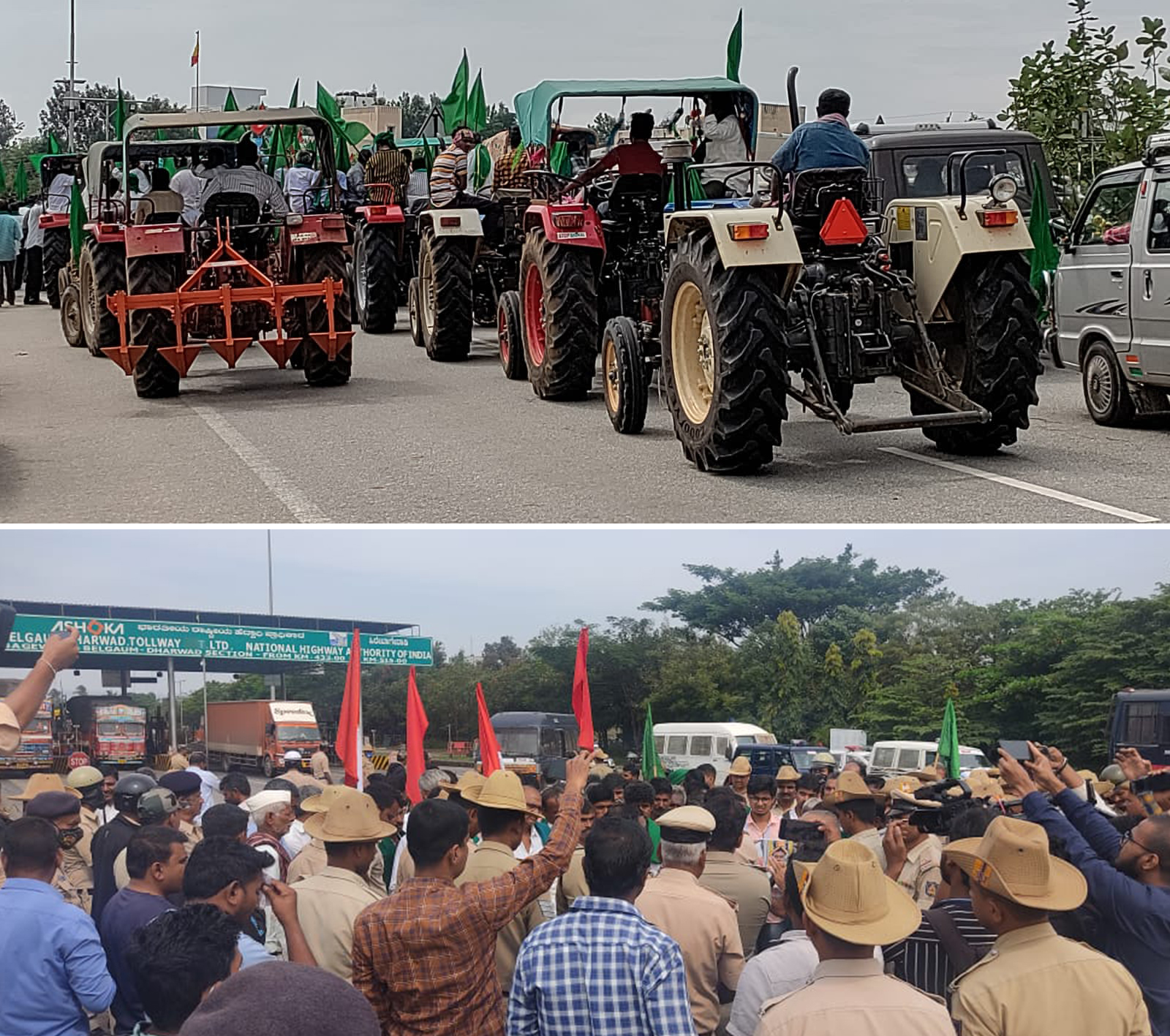 Protests were held in many districts such as Shimoga, Raichur, Bellamy, Hospet, Chamrajnagara, Mysore etc. 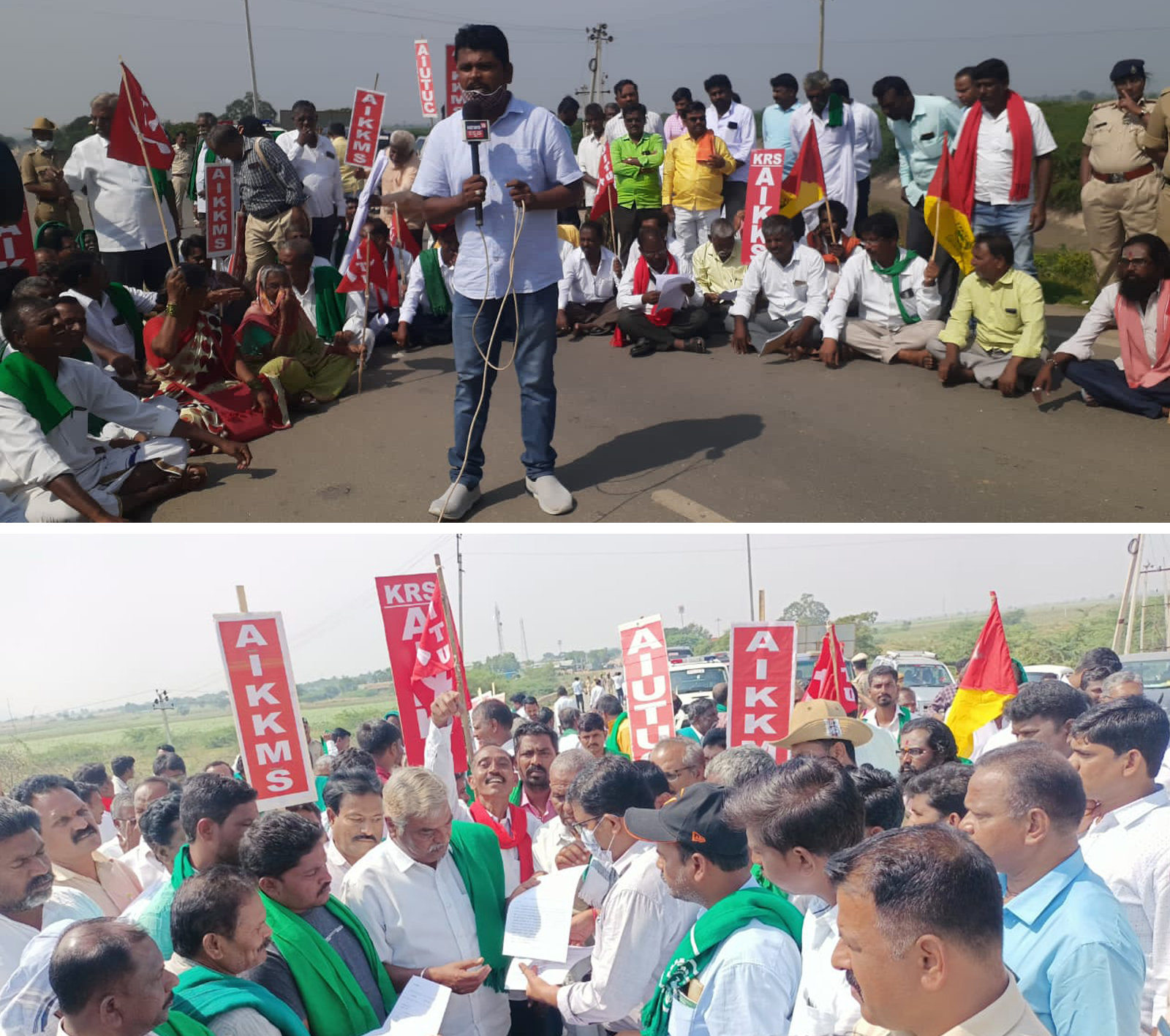 The police and administration made attempts to thwart this unified protest and celebration. In Shimoga, many protesters were arrested. 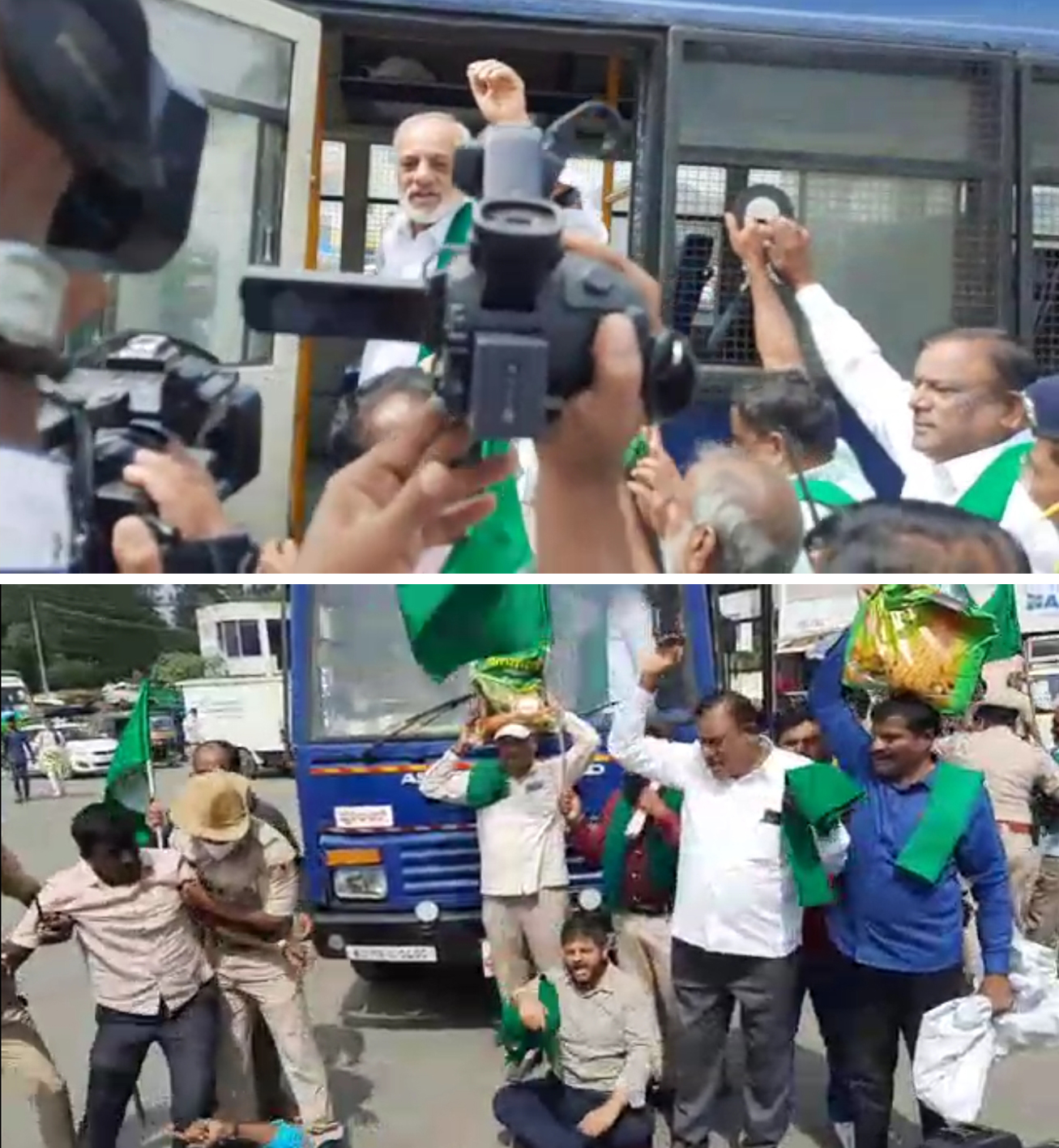 But the protests spread wide across the state of Karnataka are going on in unison with the demonstrations by farmers and activists all across the country. Karnataka Janashakti has taken a lead role in organizing the protests. Besides village campaigns and webinars on the farm laws explaining their adverse impact on farmers and agriculture, and today’s protest, activists are firm on intensifying the protests in coming days if the state government does not take back the anti-farmer ordinances and laws that it has passed.