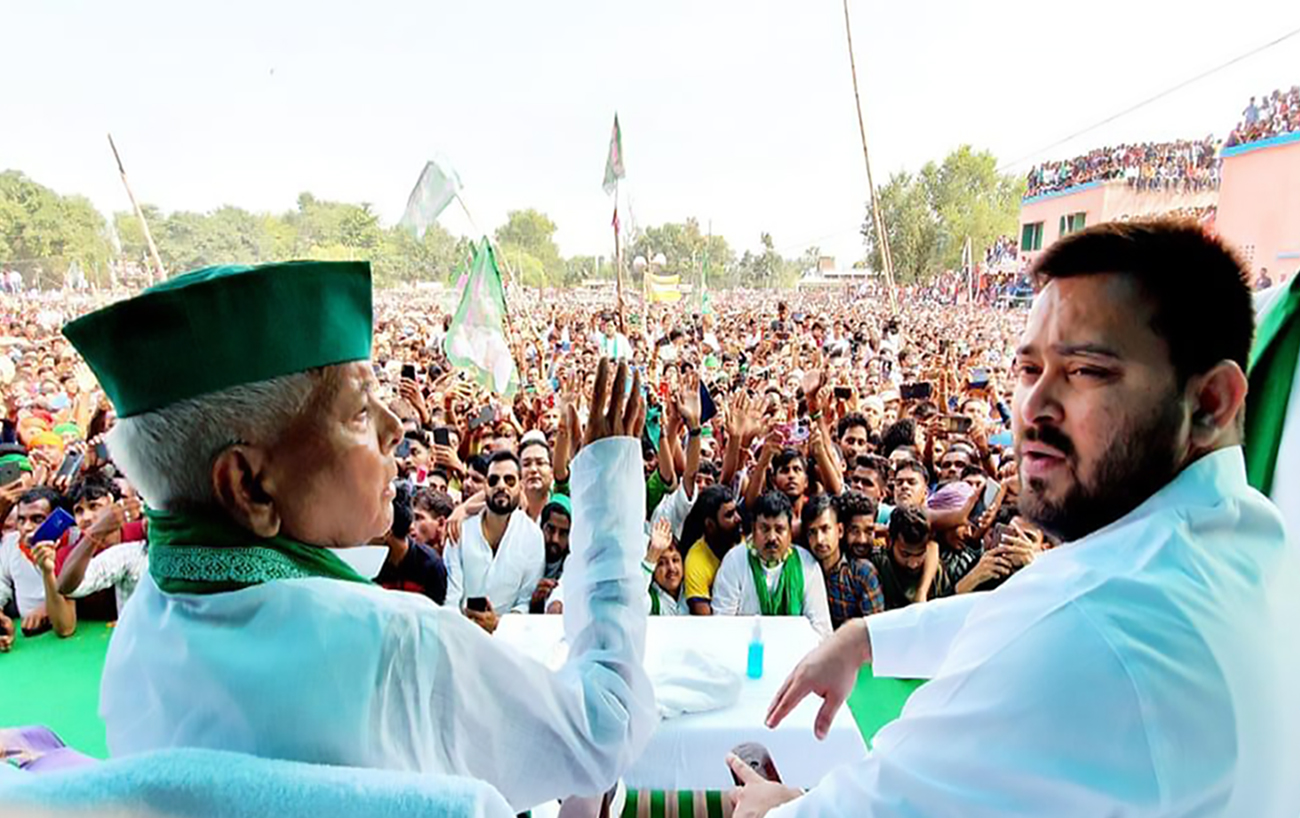 Bihar Assembly bypolls : The outcome to impact political alliances in the State

A lot of political developments have taken place in Bihar in the last one month. By-elections in two assembly constituencies will be held in the state on 30 October. The election has laid bare the contradictions in the Grand Alliance between Rashtriya Janata Dal (RJD) and the Congress. The result of the by-election on November 3 will impact the future realignment of political forces in Bihar, writes Anis Ankur.

By-elections to the two assembly seats in Bihar, Kusheshwar Sthan and Tarapur, will be held tomorrow on October 30. The by-elections to the two seats, which were won by Chief Minister Nitish Kumar’s JD(U), have been necessitated by the deaths of MLAs Shashi Bhushan Hazari (Kusheshwar Sthan), who died after a prolonged illness, and Mewalal Choudhary (Tarapur), who died of Covid-19. The results of the by-polls, which will be out on November 3, though, are unlikely to have an immediate impact on the stability of the Nitish Kumar led NDA government. However, they will likely have a bearing on the wider political situation in the state. Particularly, it could act as a catalyst to new realignment of political parties and forces in the region. So, the by-elections have evoked a keen interest amongst the political observers and forces.

The bye-elections are significant for multiple reasons. First of all, the Congress and RJD have snapped their two-decade-long alliance, and are contesting the by-polls separately, each putting up its own candidate in both the seats. Consequently, the by-elections can prove to be important political testing grounds for both parties. Secondly, after many years, Lalu Prasad Yadav, the most popular political leader in Bihar, has campaigned and addressed election rallies for RJD during the period preceding the by-election. The outcome will be a test of his sway on the electorate, particularly the Yadavs and Muslims.

Split in the Grand Alliance

The Congress and RJD are old allies in Bihar. Both the parties, along with the left parties, stitched together a grand alliance to take on the JD(U)-BJP led NDA in the last assembly election in 2020. The RJD-Congress-Left alliance led by Tejashwi Prasad, lost the election by a narrow margin of few seats.

The NDA has a very thin majority in the Bihar assembly. Both the assembly seats of Tarapur and Kushewar Sthan were won by Nitish Kumar led ruling Janata Dal (United) in the 2020 assembly election. In the 2020 assembly polls, RJD got 75 seats, Congress 19 and three left parties together won 16 seats. The Grand Alliance bagged 110 seats in the 243-member Bihar assembly. BJP won 74 seats and JD(U) 43 seats. Together they have 117 seats, but with the support of smaller parties (VIP led by Mukesh Sahni and HAM led by Jitan Ram Manjhi ), NDA managed to cross the majority mark of 122.

In the upcoming by-election, RJD has unilaterally fielded candidates in both the Tarapur and Kusheshwar Sthan assembly seats. This has created a rift between the two alliance partners. In 2020, both the seats were contested by Congress with its candidates losing to JD(U) in both the seats. In fact, the Congress was expecting that RJD would cede at least one of these two seats to it, particularly, the Kusheshwar Asthan, a reserved seat in Darbhanga district, which the Congress lost by a margin of less than 7,000 votes in the last assembly polls.

The RJD was wary of giving the seats to Congress in the by-election. It justified its decision to contest both seats, following the dismal performance of the Congress in the last assembly election, when it fought 70 seats, but could win in only 19 seats. According to RJD, leaving the seats for Congress to contest would have meant gifting them to the NDA. There is a strong feeling among RJD as well as Left alliance partners that, had the Congress fought fewer seats leaving more seats for RJD and Left parties to contest in the last assembly election, the Grand Alliance certainly would have won a few more seats and it would have been difficult for the NDA to form a government in Bihar. As Prem Kumar Mani, an intellectual, sympathetic towards RJD, commented, “In the last assembly election, Congress contested 70 seats and could win only 19. The RJD and Left won more than fifty percent of the seats they contested. Today, if there is an NDA-led government in Bihar, it is because of Congress. They should have accepted the responsibility for the defeat.”

However, the Left parties — CPI, CPI(M) and CPI-ML (Liberation) have decided to support the RJD candidates in both the assembly seats.

Old Relationship between Congress and RJD under strain

The by-election has certainly widened the rift between RJD and Congress and put the two decade old relationship of the parties under strain. The Gandhi-family led Congress and Lalu Prasad led RJD’s alliance in Bihar have stood the test of time.

In 1990, Lalu Prasad became chief minister of Bihar, after replacing the decade-long rule of Congress. The coming to power of Lalu Prasad was termed as the victory of social justice forces in Bihar’s political landscape. After 1990, Congress could never return to power in Bihar on its own strength. But when Lalu Prasad’s decade-long rule came to a halt in 2000, Congress came to his rescue. In 2000, Nitish Kumar became chief minister for seven days, but couldn’t prove his majority, therefore, Lalu Prasad returned back to power with the help of Congress. From then on, the alliance between Congress and RJD in Bihar has continued till date. In 2004, Lalu Prasad became the Union Railway Minister in the Congress led UPA government at the centre. Lalu supported the Congress at the national level, while in Bihar, Congress accepted its fate as a “junior partner” of the RJD. The relationship continued, despite many ups and downs. They fought the 2020 assembly election together, along with the Left parties.

While the relationship between two parties have degenerated to such a level that the political slugfest that had begun a while back, has now come out in the open, in the meantime, an important development has occurred in Bihar with former JNUSU president Kanhaiya Kumar having joined the Congress after quitting CPI. RJD leader Tejashwi Yadav’s antipathy with Kanhaiya Kumar is well known. It is also a catalyst in the distancing of the two old partners.

Lalu Prasad was out of the state and away from politics since December 2017, when he was convicted in the fodder scam cases and lodged in a jail in Jharkhand. Entry of Lalu Prasad after a gap of almost three and half years has heightened the political excitement in Bihar. Lalu Prasad, despite ill health, campaigned in Tarapur (Munger) and Kusheshwar Asthan (Darbhanga) on the last day. Lalu addressed a rally in the state after six years. Last time he did so was during the 2015 assembly elections. As always, his caustic comments, particularly about Congress’s Bihar in-charge Bhakta Charan Das, have invited sharp reactions not only from Congress but also from the NDA.

Lalu Prasad’s two comments, in particular, have created huge amounts of furore in the election campaign. First was about Bhakta Charan Das, Congress’s Bihar in-charge and the second comment targeted Nitish Kumar, Bihar chief minister. Bhakta Charan Das had accused the RJD for having stitched a secret understanding with the BJP. When a reporter asked Lalu Prasad about this allegation of Congress’s Bihar in-charge, Lalu Prasad sarcastically commented that ”Bhakta Charan Das is Bhakchonahar (Idiot) Das”. Lalu Prasad’s use of the adjective ‘Bhakchonhar’ (Idiot) for the Congress Bihar in-charge have been condemned by not only Congress as anti-dalit, but also by the NDA leaders, who termed it as an “unparliamentarily” and “derogatory.”

Lalu Prasad’s next target was chief minister Nitish Kumar himself. He attacked Nitish Kumar by saying that he would ensure the ‘visarjan’ (a religious term used for immersion of idols in water) of Kumar and the National Democratic Alliance (NDA). While responding to the Lalu Prasad jibe Nitish Kumar reacted by saying that “Lalu Prasad could get me shot but could do nothing else.” Lalu Prasad further responded by commenting, “Why will I do it? He will himself die.”

The Feud in Yadav Family

The RJD president Lalu Prasad not only has to  fight BJP and Congress, he is also facing a family feud in which his elder son Tejpratap has raised the banner of revolt against his own party  led by his younger son Tejasvi. Stories of bitter Yadav family quarrels have come out in the open several times. Various comments of Lalu Prasad’s elder son Tejpratap keep coming against his own party and RJD senior leaders. Even recently, Tej Pratap Yadav created a drama by staging a dharna in front of the gate of his mother Rabri Devi’s house, after he was stopped from meeting his father after his return to Patna.

In a public statement Tejpratap commented, “I am unhappy. Jagdanand Singh, state RJD president, is an RSS agent who keeps humiliating me. And I have a word of caution for my younger brother Tejashwi Yadav as well.” He further added “I often say he (Tejashwi) is like Arjun and I, like Lord Krishna, I am committed to helping him get what is his due. But he must realize he is no longer a kid to be breastfed by a mother. If the party continues to function in this fashion, he will never become chief minister.” Lalu Prasad Yadav has to step in to control and pacify the warring brothers. The by-election will also be a test of his personal charisma.

Lalu Prasad and his younger son — leader of the opposition in the Bihar Legislative Assembly, Tejashwi Yadav — are facing tough challenges on various fronts. RJD is engaged in a fierce electoral battle in the two assembly seats. It has taken a big risk by alienating its longtime political ally Congress. How this decision will affect the outcome of the elections in the two seats will surely impact Bihar politics in the coming days.

At present, the state Congress leaders and their Bihar in-charge have been heard saying that not only in this by-election, but in the next parliamentary election too, Congress will not have any alliance with the RJD. This might be political rhetoric to energize the Congress workers, but after many years, the Congress party seems to be fighting the election with renewed vigor. Senior congress leaders are campaigning at the grassroot level. The result on November 3 will show where the Congress, on its own, stands in Bihar. A good show by it will definitely increase its bargaining power with RJD, during the 2024 Parliamentary elections.

The result of the by-election is also important for Nitish Kumar. If JD(U) is able to retain both the seats, it will strengthen the stability of his government. Nitish who seems to be suffocated by an aggressive BJP dictating terms to him, will feel a little relieved and will be in a better position to assert his indispensability in Bihar to BJP leaders in Delhi.

(Anis Ankur is a freelance journalist and theatre activist from Patna in Bihar.)