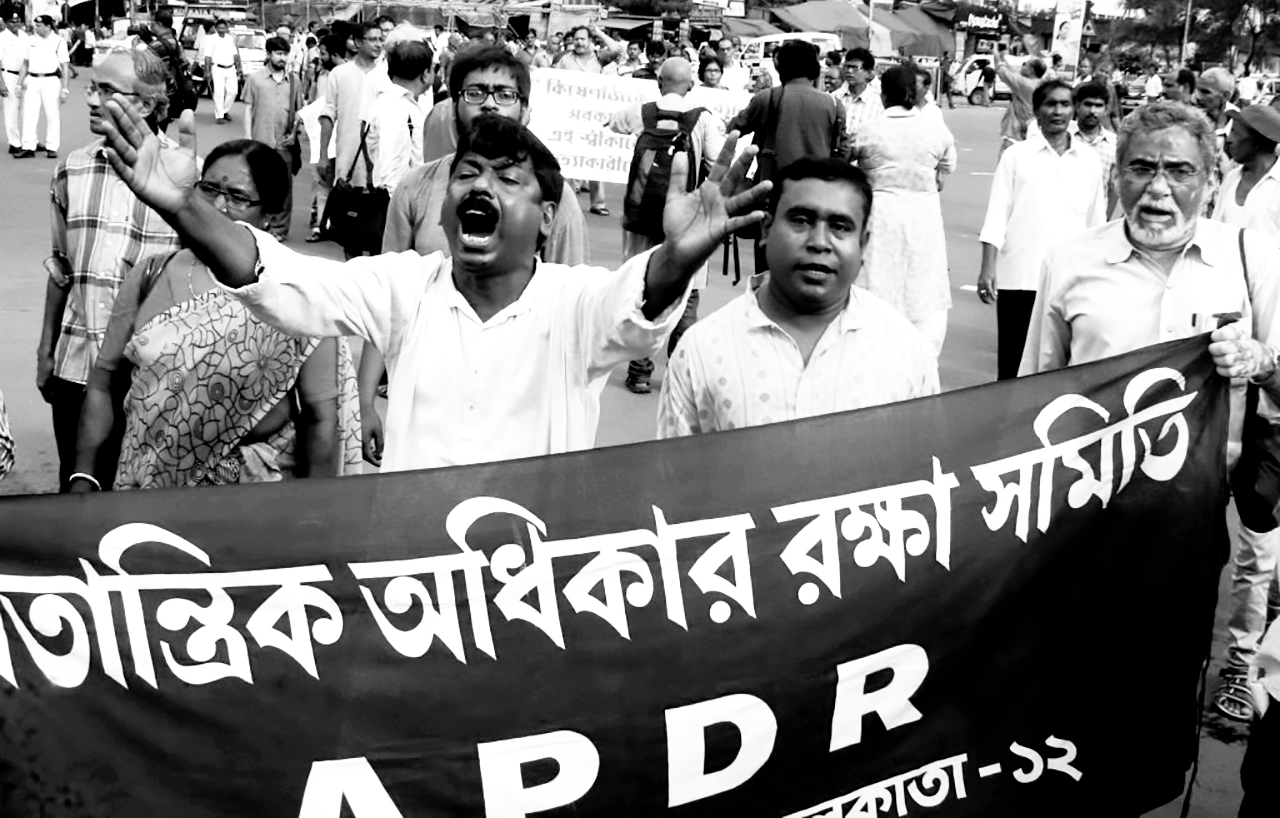 On the eve of APDR’s 28th conference scheduled to be held on 23-24 October, at Sheoraphuli, in Hooghly district of West Bengal, Groundxero, is publishing edited excerpts, chronicling the 50 years epic journey of APDR from Nilanjan Dutta’s forthcoming book, Civil Liberties Movement in India. The Part 2 of the excerpts briefly presents APDR’s efforts to release political prisoners and extend solidarity to the hunger strike by them inside jail.

In response to the second appeal, letters poured in at the APDR office and relatives and friends of political prisoners and victims of torture began to contact. And it was from the vicinity of this house that a historic procession of the “mothers, sisters, wives and other relatives of political prisoners” rolled out on the main street on 12 February 1973 with heavily armed police forces forming a moving cordon on all sides. Calcutta had not seen anything like that for a long time, as all voices of protest had been suppressed brutally. Most of the marchers, mostly women, too, had never taken part in a rally before. Rather than raising slogans, they were just yelling at the police personnel around them, taking them as the immediate representatives of state power. On their part, it was a spontaneous outburst of pent-up anger; for the numerous onlookers, it was a spectacle of protest. Tilottama Bhattacharya has reminisced, “We had a tough time marching with those delirious women. But I would say our procession was successful, because the common people had shed their tears that day.”[i] A five-member women’s delegation met the chief minister Siddhartha Shankar Ray in his office and handed over a memorandum, although he sounded quite dismissive in talking with them. After this rally, the APDR began to attract wider attention from the public, the media as well as the state. Like the ‘2 Palm Place’ address of the Civil Liberties Committee, ‘18 Madan Baral Lane’ now came under strict surveillance. In fact, because of police harassment, the office of the APDR had to be shifted several times before the Emergency — from Kapil Bhattacharya’s house to Sanjay Mitra’s house at 20 Kalidas Singha Lane to Dr Amiya Bose’s house at 99/5/1 Ballygunge Place to Forward Bloc leader Bhakti Bhushan Mandal’s house at Park Street Extension.

It was impossible for the state intelligence to understand the civil libertarian motivations of those who were trying to defend even those communist revolutionaries with whom they had wide political differences. So, they reported that here, people like Kapil Bhattacharya and Promode Sengupta were trying to bring the scattered rebel groups on a common platform. They further apprehended that using his old Indian National Army (INA) contacts, Promode Sengupta was preparing the grounds for a revolutionary movement over the whole of South and South-East Asia. He had to pay the price of his civil liberties activities till the end of his life. In February 1973, at the age of 66, he applied for a fresh passport intending to visit his ailing mother-in-law in Germany. The Government of India sought the opinion of the government of West Bengal. On 3 September 1973, the intelligence branch reported, “He is associated with the Ganatantrik Adikar Raksha Committee [a distortion of ‘Ganatantrik Adhikar Raksha Samiti’, the Bengali name of APDR] formed by the CPI to support Naxalite prisoners.” It was not safe to issue a passport to such a person. After being refused, he applied again — and was refused again because of the secret reports. The chain of secret notes went on up to as late as 1975 — until an officer discovered that the person concerned was no longer alive. The file was closed with the last note saying that Promode Sengupta had died on 18 November 1974.[ii] Sanjay Mitra became general secretary after his death.

Several other organisations such as the Legal Aid Committee, Prisoners’ Release Council and even the CPI(M)-influenced Democratic Lawyers’ Association worked closely with APDR, although there existed serious debates regarding forms of movement, reliance on legal proceedings and defending those held on charges of violence and murder. Committees also grew up with the objective to act on specific cases, like the Committee against the Parvatipuram Conspiracy Case and the Committee against the Fifth Tribunal Case. Both APDR and Legal Aid Committee — which had several common members —  became popular and got warm response to their appeal for funds to meet the court expenses and for sending clothes and other necessities to the prisoners. In one instance, four political prisoners detained in an Orissa jail themselves collected Rs 100 and sent it to the Legal Aid Committee.[iii]

Political prisoners at Alipore Central Jail, Presidency Jail and Midnapore Central Jail undertook a hunger-strike on 26 February 1974 demanding recognition of their political prisoner status and facilities according to the Jail Code. Before that, they had sent a copy of their charter of demands to APDR, which made it public at a Press conference on 23 February. As the demands were not met, the political prisoners again went on fast from 17 May, which continued up to 14 June. This time, they had added some demands concerning other long-term convicts and low-paid jail guards too. Prisoners in other jails also joined the movement. The news of their agitation was spread by the APDR far and wide. Solidarity messages were wired from Canada, USA and West Germany. A statement signed by well-known academics and journal editors from North America and Europe said:

We, the undersigned, are deeply anguished to know that many of the political suspects detained in Indian jails are on indefinite fast since May 17, 1974 to press their demand that they be recognized as political prisoners. We also deeply deplore that tens of thousands of political suspects have been kept rotting in Indian jails for several years without even proper trials and subjected to the most inhuman conditions as well as to physical torture. Most of these detainees are young people who are merely suspected of being Naxalites. We are aware that the Defence of India Rule, Preventive Detention Act, Maintenance of Internal Security Act, and a continual series of trumped up charges are among the means used to keep these people in custody in spite of the Indian legal framework. We are horrified that in a democracy such flagrant violation of people’s fundamental rights could go on. We urge the Government of India to stop it. More specifically we urge the Government of India to recognize these detainees as political prisoners and to bring them to fair and speedy trials. We also ask our fellow academics and intellectuals in India to do their utmost for the same ends.

From 29 May, women including relatives and friends of the prisoners began a relay hunger-strike at Esplanade in the heart of Calcutta city at the initiative of the APDR and Legal Aid Committee. A convention was held at Calcutta on 30 May and noted intellectuals like Satyajit Ray, Mrinal Sen and Soumitra Chattopadhyay issued a statement supporting the demands. People flocked around the women’s fast venue in increasing numbers and all Opposition parties sent their representatives to address them. Under public pressure, the state jail minister Gyan Singh Sohan Pal went to a jail, met the prisoners and accepted one or two minor demands. The hunger-strike continued both in and outside the prisons and solidarity meetings and marches were held all over the state every day. Representatives from the APDR, Legal Aid Committee and Forward Bloc visited the jails to check the condition of the fasting prisoners. The delegates, Sanjay Mitra, advocate Arun Prakash Chatterjee and Bhakti Bhushan Mandal found that despite losing weight and suffering from ill-health, their spirit was unbroken. Some inmates of the Dum Dum jail had been hurt when the authorities tried to force-feed them.

Eight Left parties including the CPI(M) issued a joint pledge on 13 June to build up a bigger agitation in support of the prisoners’ charter and appealed to them to withdraw their fast. The next morning, the jail minister again appealed to the prisoners to lift their fast, but they refused. In the afternoon, a delegation of the Left parties led by Bhakti Bhushan Mandal went to meet them and this time they relented. The APDR issued a statement saying, “We pay our respect to the political prisoners at the end of their protracted glorious hunger-strike. We hope those who have given them some assurances would remain faithful to the pledges…. We will continue this movement unitedly.” As a result of the hunger-strike and solidarity actions, the prisoners were able to secure certain rights, such as regular visits by their relatives and access to non-proscribed newspapers and periodicals. Clothes were to be supplied by the authorities to under-trial prisoners whose relatives were not in a position to do so.[iv]

Meanwhile, on 3 May, about 250 women workers of nine parliamentary Left Parties who staged a civil disobedience agitation protesting rising prices were detained in Presidency Jail for 24 hours. Within this short time, they found out despite the best of efforts by the authorities to prevent them that there were seven young Naxalite women prisoners cast away in a separate enclosure beside the ‘lunatic cells’. Every month, they were taken to the Calcutta Police headquarters at Lalbazar and tortured severely in the name of interrogation. Shukla Daw, wife of APDR vice-president Baren Daw, was one of the detained women who met them. Hearing the harrowing stories from her, the APDR got a statement prepared by her and three of her comrades Gita Sengupta, Bani Majumder and Nupur De and released it to the Press immediately. It created a furore all over the country. The jail minister met the women prisoners. Though they refused to speak to him, he said in public that the allegations were false. Then CPI MP and APDR member Indrajit Gupta visited them and brought out the truth. After this, the torture stopped.

Solidarity to the democratic rights movement in West Bengal was also extended by international organisations such as the Committee of Concerned Asian Scholars, USA, Indian Workingmen’s Association, UK, Indian People’s Association in North America (IPANA) and Amnesty International (AI). An AI representative first visited the state in early 1973. After making a thorough investigation into the situation here and in the country in general, the organisation sent three memoranda to the state and central governments, dated 15 March 1973, 19 October 1973 and 1 February 1974. During the prison hunger-strike, the AI prepared a Short Report on Detention Conditions in West Bengal Jails, which it sent along with some recommendations to the Prime Minister of India and the Chief Minister of West Bengal on 14 June 1974. An updated version of the report was published in September the same year. [v] The APDR maintained live contacts with the AI.

*Edited excerpts from Nilanjan Dutta’s forthcoming book, Civil Liberties Movement in India. The author is a human right activist and an independent journalist.