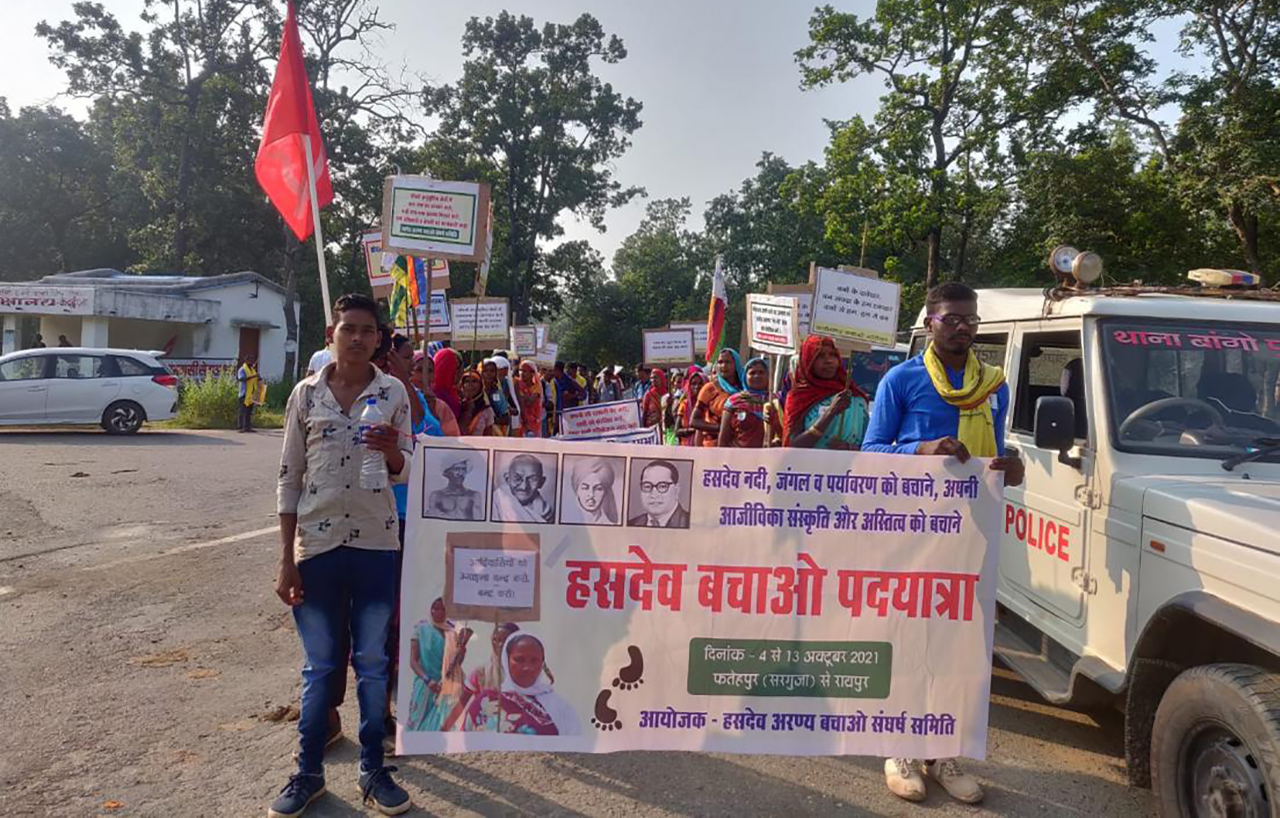 Around 250 residents of Chhattisgarh’s Hasdeo Arand started a march from Surguja district to Raipur, around 330 kilometres away, on 4 October 2021, demanding cancellation of all coal mining projects in their region. Environmentalists and activists also took part in the march. After covering more than 300 km distance to the capital, Raipur over 10 days, the marchers reached Raipur today, where they will submit their demands to the state Governor and Chief Minister.

Starting from 4 October 2021, more than 250 Adivasi residents from 30 villages of the Hasdeo Aranya region of Surguja are currently marching under the banner of the Hasdeo Bachao Padyatra. The villagers began their foot march from Madanpur village, covering the more than 300 km distance to the capital, Raipur over 10 days. The padayatra (foot march) reaches Raipur today, where they will submit their demands to the state Governor and Chief Minister.

The representatives of all 30 villages of Hasdeo Arand  region are part of this padayatra demanding justice from state and Central government by cancelling all coal mining projects in the region. The 300 km long foot march from Madanpur village to Raipur is a crucial assertion of Adivasi’s rights over their land and resources.

Local Adivasi communities and Gram Sabhas have been continuously protesting since 2014 against the central and state government’s approval of coal mining projects which will decimate the Hasdeo Aranya forest region of north Chhattisgarh. The region occupies some of India’s pristine and largest contiguous tracts of forest land. These are full of perennial water sources, rich biodiversity, and sustain the livelihoods of Gond Adivasi communities in surrounding villages. In 2010, the government itself declared that Hasdeo Aranya should be treated as a ‘No-Go’ zone for coal mining, but this decision was later reversed.

Mining corporations have been attracted by the massive coal reserves in the Hasdeo Arand Coalfield, which is estimated to have over a billion metric tonnes of coal spread over 1,878 sq. km. (of which 1,502 sq. km. is forest land). The villages and forests of Hasdeo Aranya have been divided into 18 coal-mining blocks that will be distributed to companies. So far, 4 coal blocks have been allotted to state-owned companies, which have contracted Adani Enterprises Limited (AEL) as Mine Developer and Operator (MDO).

Even though most of Hasdeo Aranya region is a Schedule V area, crucial laws for protecting the rights of Adivasi communities – including the Panchayats (Extension to Scheduled Areas) Act, 1996 and Forest Rights Act, 2006 – are not being implemented here. Community forest rights claims filed by villagers remain pending. Environmental and forest clearances have proceeded despite strong opposition from gram sabhas. In some cases, such as the Parsa Coal Block, the forest clearance was awarded based on fake gram sabha proceedings. The government has also attempted to acquire land for mining under the outdated and draconian Coal Bearing Areas (Acquisition & Development) Act, 1957 to bypass established processes for public consultation and consent from gram sabhas.

NAPM stands in full and firm solidarity with the Hasdeo Aranya Bachao Sangharsh Samiti and local Adivasi communities who are foot-marching to Raipur to assert their rights over their forests, lands and resources. NAPM call upon the Governor and the Chief Minister of the state to meet the yatris today at Raipur and concede to all their legitimate demands. We also urge other democratic groups to extend support to this crucial struggle.

The demands of the Hasdeo Aranya Bachao Sangharsh Samiti are: