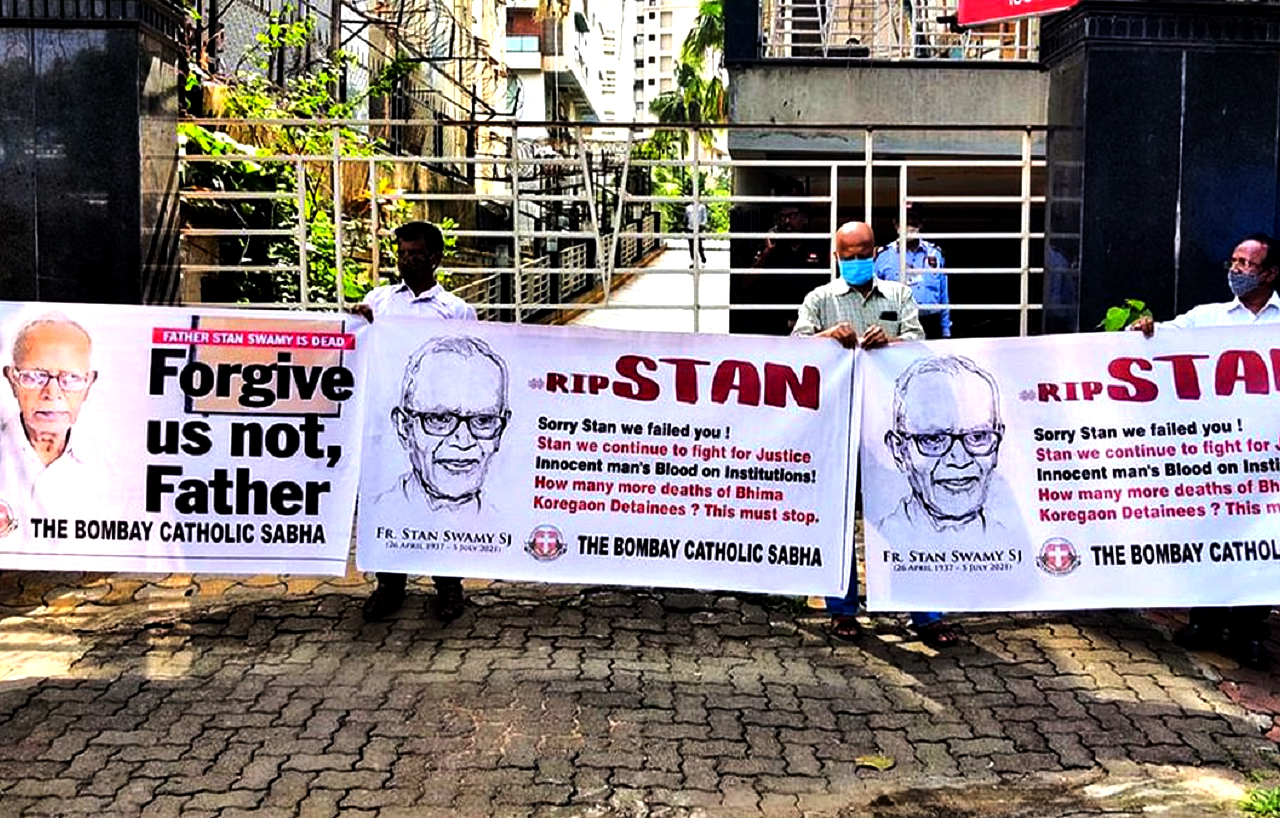 Stan was certainly a rebel. He revolted against the widespread injustice in society. And he was convinced that only through the popular movements a just society could be achieved, writes Sanjay Basu Mullick.

“As flies to wanton boys, are we to the gods

They kill us for their sport”

Quoted a friend from Shakespeare’s King Lear after hearing the news of Stan’s demise, as it fitted the actions of the Indian state in our times.

Father Stanislaus Lourdusamy (Stan Swami) passed away at 1.30 in the afternoon of the 5th of July 2021, in the Holy Family Hospital, Mumbai, after a prolonged illness caused by the cruelty of the despotic state that boasts of being the world’s largest democracy! In the blind eyes of the judiciary of the land, he was ‘sympathetic’ to the banned Maoist organization of the country. Consequently, he was made an accused in the infamous Bhima Koregaon case. National Investigation Agency (NIA) charged him with sedition before putting him in the notorious Taloja prison in Mumbai. Before that the sleuths ransacked his one room residence in Ranchi at Bagaicha and seized his laptop. Whatever ‘proof’ they had against him to substantiate the accusation was never produced in the court of law.

The fact is that when the Adivasis of Jharkhand joined the Maoist movement en masse, a large number of innocent women and children were nabbed by the paramilitary forces and put them behind the bars and not only during the so-called the ‘Operation Green Hunt’, Stan raised his voice against it and tried his best–through legal means largely–to get them released. There were many incidents of killing of innocent villagers who had nothing to do with the Maoists. Stan organized several fact finding missions to probe such incidents. He also criticised the BJP-led government of Jharkhand for displacing a large number of villagers, mostly Adivasi, in the name of ‘development’. His major ‘crime’ was to support the ‘Pattahlgadi Movement’ that the Adivasis of Jharkhand organized to assert their rights enshrined in the Provisions of Panchayat (Extension in Scheduled Areas) 1996, commonly known as the PESA and declare their villages as autonomous, community-governed areas.

And the major eyesore of the state was the Bagaicha, literally meaning the ‘garden of learning’ that Stan established and headed as a centre for building awareness for the people of Jharkhand about their rights.

Stan was a Jesuit priest. He was born in a devout Tamil Christian family of the village Viragalur in Tamil Nadu, on the 26th of April 1937. He entered the Society of Jesus in 1957 and became an ordained priest in 1970. The suffering of the downtrodden, especially Dalits and other working people, found life-long resonance in the mind of young Stan, who strongly believed in the theology of the oppressed. He had chosen Jharkhand, the land of the Adivasis as his field of activism. Exposure to the Adivasi world began when Stan was a student in the St. Xavier’s College, Ranchi in 1962. The Philippines, where he had gone for higher studies in theology and sociology, provided another opportunity to witness the tribal life and struggle from up close. Finally, he received his degree in Social Work in Belgium in 1975.

Stan was also a Marxist, and tried to find out the root causes of oppression and exploitation of the Adivasis and Dalits in India. Marxism provided him the tools and the idea of socialism gave him the solution. His theology and ideology merged into one and prompted him to take the path of social action in the stormy 70s. He had joined the Jamshedpur province of the Jesuit order. This brought him closer to the Adivasis of eastern India. Stationing himself in Chaibasa in West Singhbhum, he motivated a large number of priests and nuns to take up social action in the fields of human rights and social justice.

Stan was certainly a rebel. He revolted against the widespread injustice in society. And he was convinced that only through the popular movements a just society could be achieved. He had expressed this view through his books, numerous articles in magazines and journals and posts in social media. Stan was present in the peoples’ movements of all kinds, be it the land and forest rights movement, or the anti-dam one; be it the movement for self-rule of the Adivasis or the movement to protect the important clauses of the land tenure acts that safeguard the tribal land, form being diluted by the state government.  He led the life of an activist and decided to remain outside the clerical bindings. His political convictions led him to take up the cause of the Adivasis and soon he became the voice of the people – a dissenting voice.

What had made the state so scared of him? How can a man of his age, a near-invalid struggling with Parkinson’s disease for many years, be a threat to the nation? People all over the world are raising this question today. People are also questioning the treatment that the judiciary meted out to him while he was in prison. In a letter he wrote from his prison cell, he praised the jail mates who fed him, helped him to take bath and took good care of him. The jail authority did nothing to provide him any assistance. He was treated like a criminal and denied even basic medical support for which his lawyer kept praying in the court of law. And when eventually a few small things were granted he was on the verge of death. When shifted to the Holy Family Hospital in Mumbai, he had already contracted COVID-19. A tireless social worker and patriot of highest order, Stan was left to die the death of a ‘conspirator against the country’, the country that he loved so much.

Today how many Stans are languishing in jails of India? How many face the cruelty of the state? No media tells us such stories, nor do the politicians protest it. But one Stan’s demise has been able to sound the wakeup call. Condemnation from all corners of the country and the world is renting the moist air of the cloudy sky. A silver lining of hope illuminates the pained faces of the people, for whom stood up Stan, following Christ the liberator.