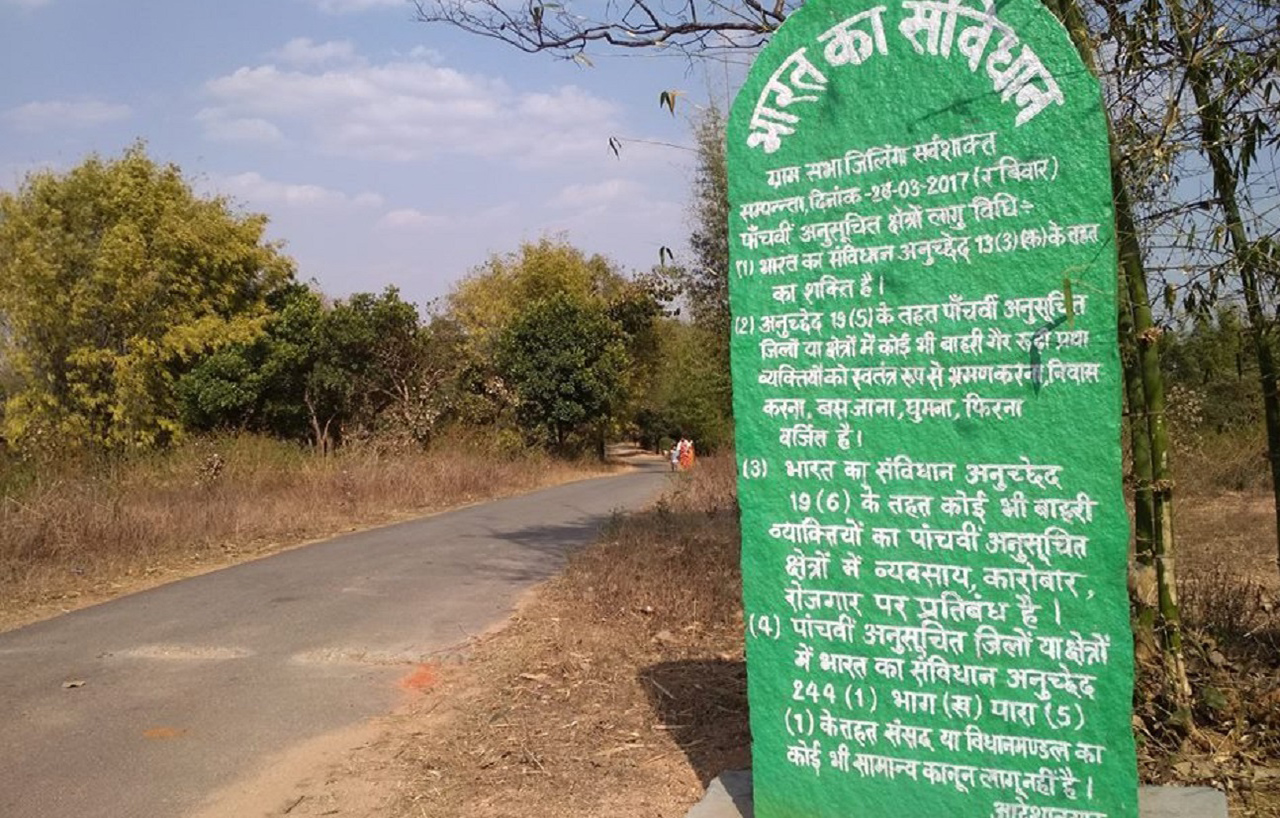 ‘WHERE ANTS DROVE OUT ELEPHANTS’ by Stan Lurduswamy

Amidst the huge outpour of shock, anger and rage over the death of Father Stan Swamy, which has been described by many as ‘institutional murder by an inhuman state’, we need to remember that the late Father Stan Larduswamy was a pioneer of the peoples’ struggles to protect ‘Jal-Jungle-Jameen (water-forest-land)” from state and corporate aggression in the state of Jharkhand. He became an eyesore for the state and its corporate allies, his crime being none other than being involved in actively organizing and leading the indigenous Adivasi people in such struggles.

His arrest in the Bhima Koregoan case in 2020, was, in fact, a deep conspiracy of the corporate-state nexus, one of whose primary objectives was to destroy the anti-displacement movement of the Adivasis from their traditional forest-land in Jharkhand. A few days prior to his arrest, Fr. Stan, through a recorded video message, informed us of the state’s conspiratorial motive to arrest him, by falsely accusing him of harbouring links with the banned Maoist outfit.

Stan has written several articles on the anti-displacement movement, the state of Jharkhand, and the role of the state, which were published in the magazine Praxis Review. We are republishing here an article penned by Stan in 2013, which will help us understand his work and thoughts.

Story of people’s resistance in Jharkhand

Displacement is painful for anybody. To leave the place where one was born and brought up, the house that one built, with one’s own labour can be even more painful. Even more, when no alternate resettlement has been worked out and one has nowhere to go, it is most painful. And when it comes to the Indigenous Adivasi people for whom their land is not just an economic commodity but a source of spiritual sustenance, it can be heart-rending.

A very conservative estimate indicates that during the last 50 years approximately 2 crore 13 lakh people have been displaced in the country owing to big projects such a mines, dams, industries, wild-life sanctuaries, field firing range etc. Of this, at least 40%, approximately 85 lakhs, are indigenous Adivasi people. Of all the displaced, only one-fourth have been resettled. The remaining Adivasis were given some cash compensation arbitrarily fixed by local administration and then neatly forgotten.

Independent studies done during the mid-1990s reveal that in Jharkhand about 15 lakh persons have been displaced and about 15 lakh acres of land alienated from mainly Adivasi people. Needless to say, during the last 15 years a lot more displacement of people and alienation of land have taken place. Strange but true, rehabilitation of the displaced was never taken seriously by any government during all these six decades when the process of industrialisation for ‘national development’ has been in vogue. In fact there was no rehabilitation policy at all.

MOU- signing spree after the creation of Jharkhand

The real reason for the creation of Jharkhand as a separate state in November 2000 was not so much to respect and honour the long cherished wish and struggle of the indigenous people to govern themselves as per their culture and traditions but in view of opening up the vast mineral resources to national and international mining companies whose pressure was increasingly brought to bear on the government Quite understandably one MOU after another were signed between the state government and various companies without any reference or consultation or consent of the mainly Adivasi people in whose lands all this natural wealth is stored, Legal safeguards meant to protect Adivasi land from being alienated to non-Adivasis such as The Chotanagpur Tenancy Act (1908), The Santal Parganas Tenancy Act (1949), The Constitutional provisions through the 5th Schedule, The Provisions (Extend3ed to Scheduled Areas) Act (1996), some significant Supreme Court judgments such as the Samanta Judgement (1997) were and continue to be neatly ignored  by the central and state governments in generously awarding vast tracts of land to industrialists at their asking. Over hundred such MOUs were signed during 2001 and 2010. Rough estimates indicate that about 1.4 lakh acres of land have been signed off. A cruel betrayal of the Adivasi people for whom land is not just an economic commodity but a source of spiritual/cultural sustenance.

In a span of three to four years the Jharkhandi people began to realize that the centre and state governments were not for people’s welfare but that they were laying steps to sell off people’s land, their water, and forest resources together with all the mineral riches to corporate houses. They decided to act. Wherever projects together with land requirements were announced people mobilized and organised themselves and said an emphatic ‘no’ to the government and companies. People’s Resistance Movements Against Displacement sprang up in different parts of Jharkhand from 2004 onwards. Even as people stood together in the form of micro-resistance movements, the industrialists, local administration, police, lower judiciary, most of the print and electronic media and the urban middle class joined forces. They began to sing songs of ‘development’ and accused the people’s movements as ‘anti-development’. The police started to harass the leaders of people’s movements as ‘obstructing government work’ and as having extremist leanings. It is this situation which brought together activists leading anti-displacement struggles, some socially concerned intellectuals, few members of the media, and a few folk artists and some journalists. After a series of discussions and reflections it was decided to bring together the various anti-displacement movements under some umbrella organisation so as to strengthen the people’s struggle and to express support and solidarity to each other. Three to four such macro bodies emerged. Public meetings, rallies, advocacy, and press conferences were held to educate and motivate people in the struggle. It was made very clear that these anti-displacement movements will not enter into any dialogue with the government or the company to discuss rehabilitation facilities for particular projects since it would imply that people accept to be displaced.

OPERATION GREEN HUNT… meant to hunt out the people and clear their green fields and forests to give to mining companies. A new philosophy was created to the effect that development is not taking place in the tribal belt of central India because of the ‘menace of Naxalism’ and if the naxals/Maoists can be eliminated, the government will undertake systematic development programmes and the tribal population will catch up in the developmental process. Hundreds of police and CRPF jawans were sent into the villages of the so called ‘red zones’. They did not have the guts to go deep into the jungles and confront the naxals. Instead they gave vent to their frustrations on the helpless innocent village folk. They harassed them, beat them up, ransacked their houses, humiliated the elderly, dishonoured the women and arrested or shot any young person. They were not accountable to any civil authority. The peaceful life of the village communities was shattered.

Protests against state repression by human rights and civic rights groups started in good earnest. During 2010 public meetings, rallies, advocacy work condemning state action against its own citizens were conducted. At the same time, resistance to displacement was also strengthened. The end result was despite the state coming down so heavily on them, the indigenous Adivasi/mulnivasi people steadfastly refused to part with their land for the industrialists. Out of about 100 MOUs signed by the Jharkhand government with industrialists, hardly three or four companies have succeeded in acquiring some land, setting up their industries and starting partial production. This too they did by dividing local communities, enticing them with false promises or threatening them by using hooligans. Most significantly, the big companies which asked for hundreds and thousands of acres of land were turned away empty handed. This is indeed a heroic achievement of the poorest of the poor against the mighty industrialist giants.

‘Operation Anaconda’ brought in a change of strategy in the state’s war against the Adivasi people. It was unleashed in August 2011. Anaconda, the huge serpent of the Amazon basin in Latin America, was the code name. A thickly forested area by the name of ‘Saranda’ in Singhbhum district which had been under the influence of CPI (Maoists) was chosen as a fore-warning of things to come. So now on it will not be a hunt spread out over a large area but pinpoint smaller compact areas as ‘terrorist affected’ and swipe the Adivasi people out even as Anaconda swipes everything on its way.

Thousands of police and paramilitary forces were brought in from the different parts of the country to do the swiping operation. Even the names of these battalions (“Greyhounds”, “Cobras”, “Scorpions”) were supposed to evoke a sense of fright among people. They were mostly outsiders who did not know the culture, language, of the Adivasi people. Their achievement during these months was three villagers dead, three in deathbed, several houses destroyed and granaries incinerated. They swept through village after village, destroyed the straw roofs, drove the people out of their homes and burnt their clothes, valuables, stole their money and killed their cattle.

This cruel action of the state was brought to light and condemned by human rights activists, artists, leftist political parties, press and electronic media. An appeal was made to the National Human Rights commission which was good enough to respond and made its investigation although its final report is still awaited.

The central and state governments have gone into face-saving exercises. They ended the infamous Operation Anaconda, offered some monetary relief to the victims and are now speaking of developing Saranda-villages with top bureaucrats in command.

The end result of this cruel exercise on people is that the Jharkhand government has allotted iron-ore to 19 steel companies.

At the same time, the Adivasi people who have nothing to lose but the end of state repression, will continue to resist displacement and land alienation.