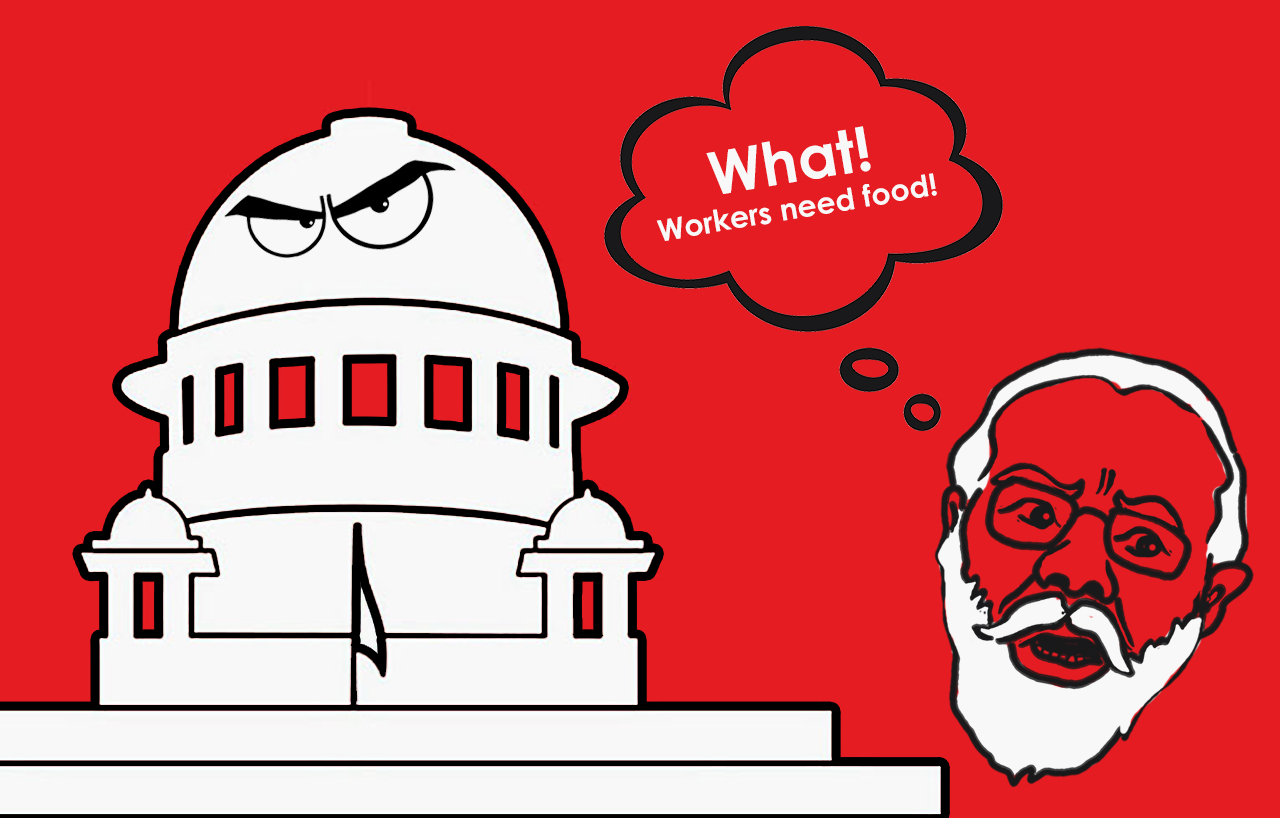 The Supreme Court of India on Thursday in an interim direction asked the Union of India, the state governments of Delhi, Uttar Pradesh and Haryana to provide free dry ration to migrant workers in National Capital Region (NCR) with effect from May, 2021.  The court further added that while providing dry ration the Central and State governments shall not insist on an identity card. The government should also arrange transport for those stranded migrant labourers in the NRC who want to return home.

The Supreme Court bench of Justice Ashok Bhushan and Justice M.R. Shah, while hearing a Suo Motu Writ Petition filed by a group of social activists, in regard to problems and miseries of migrant labourers due to the lockdowns announced by various state governments in wake of the second wave of the pandemic, directed these governments to open community kitchen for stranded migrant labourers so that they and their family could get two meals a day.

Harsh Mander, Anjali Bhardwaj and Jagdeep Chhokar have in the petition filed jointly through advocates Prashant Bhushan and Cheryl D’Souza have pointed out that nearly 8 crore migant labourers are facing acute hardships because of the second wave of Covid 19. They pointed out that last year, in 2020, when the nationwide lockdown was imposed on 24 March, migrant labourers were the great sufferers because of cessation of their employment, they being left with no financial support to sustain themselves leading to large exodus from metro cities like Delhi and Bombay.

The petitioners said that in view of the surge of second wave of COVID-19 after March, 2021, National Capital Territory (NCT) of Delhi and other States have brought fresh restrictions, night curfews and lockdowns in April, 2021. So, there has been loss of livelihood of migrant labourers and they have started to move to their home districts fearing that lockdown may continue bringing more miseries to them. They highlighted the fact that exorbitant fares are being charged from migrant labourers who wanted to go home by private bus owners ranging from 4 to 5 times of normal fares.

Last year the Central Government has announced Atma Nirbhar Bharat Scheme where for the period of two months May and June, 2020, 5 kg food grains and 1 kg pulses were announced to be given to the migrant labourers who were not covered by the Public Distribution System under the National Food Security Act. The petitioners pleaded the court to ask the Central Government and State Governments to immediately put in place mechanisms to provide rations to all migrant workers and their families who have been excluded from the National Food Security Act and PDS programmes. They stated that at the time of such immense crisis, self-declaration on need of rations should be accepted to ensure maximum access for the marginalised.  They also prayed that it is crucial to provide free cooked food through networks of community kitchens, hunger relief and feeding centres especially at places where distressed migrant workers are congregating such as industrial areas, homeless shelters, bus stations, train stations and other areas. Lastly, they asked for the migrant labourers who want to go to their home town should be extended transport facilities by the State Governments.

After hearing the counsel for the parties the SC bench directed the Central Government as well as the Government of State of Delhi, U.P. and Haryana (for the Districts included in the NCR) to file a reply to the application suggesting means and measures by which they shall ameliorate miseries of stranded migrant labourers. The court also issued notice to the State of Maharashtra, Gujarat and Bihar to file their reply giving the details of the measures which they propose to take in this matter.

And, in the meantime, the Supreme Court issued the following interim directions:

The Court, as a last chance, gave further 10 days’ time to the NCT of Delhi, State of Uttar Pradesh, State of Haryana, State of Bihar, State of Gujarat, State of Maharashtra and State of Orissa to file their specific responses to steps taken or to be taken and within how much time necessary required steps will be taken in regards to its earlier orders about the migrant workers dated 09.06.2020 and 31.07.2020.  With respect to other States, the Court said that further directions will be issued later and the matter was put up for hearing on 24th of May, 2021.

The pdf of the full order is attached below: