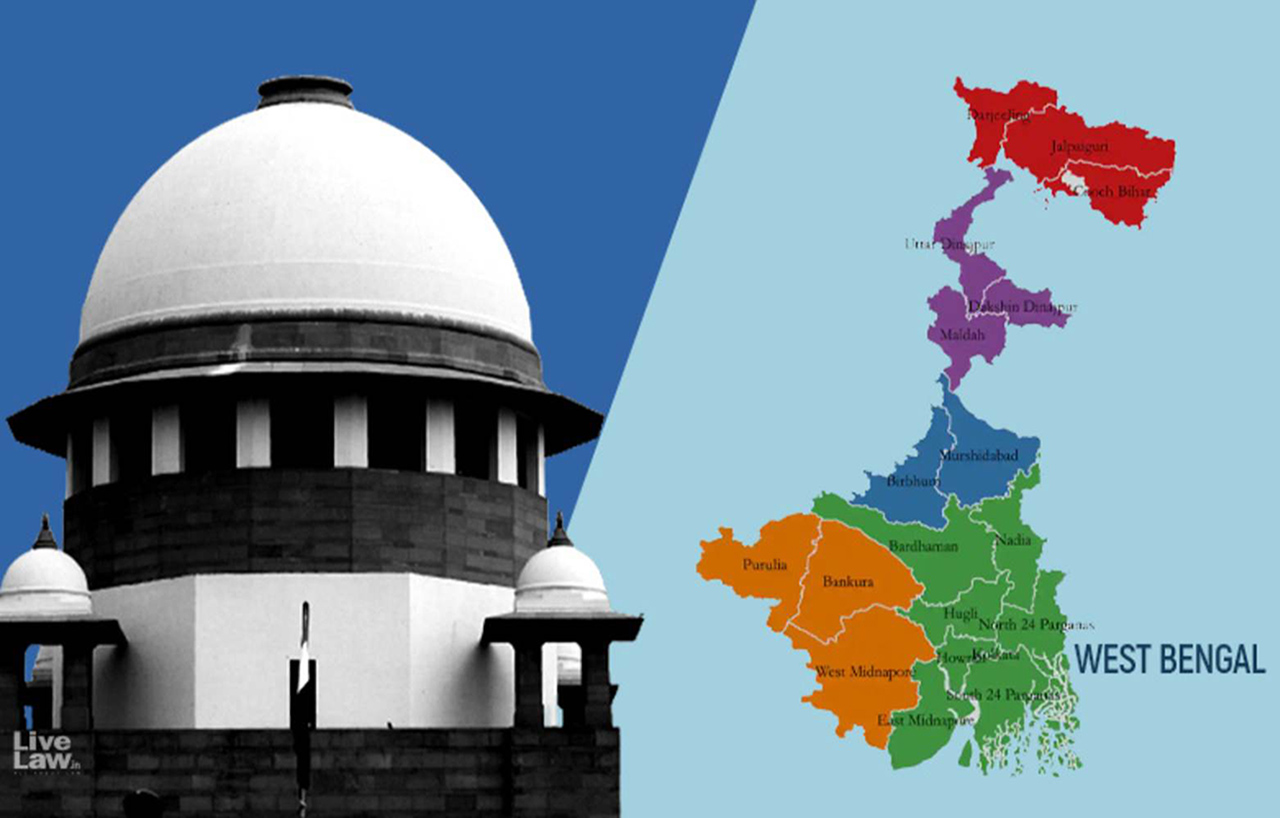 The epic victory of Mamata Banerjee in the assembly election was marred by bloody clashes which broke out in many parts of the state. More than 14 persons belonging to various political parties have died so far in the political violence that erupted after the poll results were announced on 2 May. The supporters and leaders of BJP have raised the clamour for imposition of President’s rule in the state. A plea in this regard has even been filed in the Supreme Court. Pritha Paul examines how tenable is this demand and what is the real motive behind raising it.

Post-election violence is an old tradition in India, particularly in West Bengal, one which has cost numerous lives. It cannot be disputed that such acts of deplorable annihilation of political opponents as a celebration of victory in a democratic process is worthy of nothing but condemnation. However, along with this clarification, it must also be addressed that it is hardly a sufficient ground to call for the dissolution of a state government which has achieved majority support from the people, that too by such a large margin. The call for President’s Rule in Bengal right after the historic loss of BJP in the 2021 election is hardly surprising. The central government has time and again attempted to popularize the imposition of President’s Rule to capture all dissenting states, especially the ones which do not adhere to the communal Hindutva ideology propagated by the centre.

Under Article 356, when there is a constitutional breakdown in the state machinery, the President can declare ‘President’s Rule’ in the state. The declaration by the President has to be approved by both Houses of Parliament and if not approved, the declaration becomes ineffective at the end of two months. However, if approved, it allows the union government to suspend the state government and take control of the state. The union government controls the state machinery through the Governor who is appointed by the President and is therefore, “an agent of the centre”. Though the article grants the centre exceptional powers and threatens the federal structure of India, the constituent assembly did not intend for this Article to be invoked, except in the rarest of the rare cases. It expressed the belief that Article 356 “will never be called into operation and [it] would remain a dead letter.” However, the framers of the Constitution were aware of the potential of the Article to be misused and hence identified two steps that need to be taken by the President, besides exercising caution and good faith, before a President’s Rule is declared in a state (in Dr. B.R. Ambedkar’s words):

“I hope the first thing he will do would be to issue a mere warning to a province that has erred, that things were not happening, in the way in which they were intended to happen in the Constitution. If that warning fails, the second thing for him to do will be to order an election allowing the people of the province to settle matters by themselves. It is only when these two remedies fail that he would resort to this article.“

However, this has hardly been followed. Article 356 has been widely misused by central governments to topple down state governments which did not adhere to the politics of the party holding power in the centre. The Article has also been abused as a tool to threaten state governments to conform to the centre’s policies. Till date, the Article has been invoked more than 100 times, and 24 times, state governments have been dismissed in favour of President’s Rule despite the Chief Minister enjoying majority support in the Legislative Assembly. This practice, however, was fortunately brought to an end by the nine-judge bench in the 1994 landmark judgement of S.R. Bommai v Union of India.

In view of the ground reality where the central government dismissed state governments on personal vendetta, the judgement laid down restrictions on imposing Article 356 and also illustrated situations where Article 356 could not be invoked. One such situation was listed as:

“A situation of maladministration in a State where a duly constituted Ministry enjoying majority support in the Assembly, is in office. Imposition of President’s rule in such a situation will be extraneous to the purpose for which the power under Article 356 has been conferred. It was made indubitably clear by the Constitution framers that this power is not meant to be exercised for the purpose of securing good government.”

The court essentially limited the power of the President to declare President’s Rule. The court held that a declaration without a warning to the state government or an opportunity to rectify the troubled situation would amount to an improper declaration. Only in cases where delay may lead to “disastrous consequences” can the service of such a warning be done away with. The court also clarified that such a declaration is also subject to judicial review. The court supported its view on the foundation of federalism. It held federalism as not only a tool to facilitate efficient governance and administration but also as an essential feature of the Constitution of India ensuring autonomy and sovereignty of the states with respect to their designated subject-matters. The law, therefore, is clear in this regard. The state government in West Bengal which won more than two-third seats in the just concluded assembly election cannot be dismissed merely on the premise of “bad administration”.

This is where the circulation of false news of communal violence against Hindus in Bengal and the allegations that the communal violence is condoned by the state government become relevant. While the court in S.R. Bommai had held that “bad administration” is not a sufficient ground for declaration of emergency, it had found that violation of secularism is a sufficient ground for the same. This is because secularism is part of the basic structure of the Constitution, violation of which would amount to violation of “the provisions of [the] Constitution”. It is, therefore, important for the centre to establish that the violence which is taking place in Bengal is unlike previous post-election violence. In order to justify President’s Rule in Bengal, it is important for the centre to establish that this year, Bengal is witnessing not merely a political killings, rather a state sponsored persecution based on religious identity. While the claim of religious persecution itself is hypocritical, besides false, coming from a Centre government which is infamous for its communal ideology, it forms a perfect legal justification for a Presidential proclamation.

This is especially important since the court’s power to judicially review a declaration of President’s rule is limited in scope. While every judge in the Bommai case agreed that a proclamation under Article 356 is subject to judicial interference, the majority judgement held that the court cannot interfere with a proclamation as long as it is based on some relevant material, “even if part of the material is irrelevant”. Meaning, if several grounds are advanced to justify a Presidential proclamation, as long as one or some of the grounds are relevant, the court cannot interfere with the proclamation even if the others are frivolous grounds. Communalisation of the political clashes in post-2021-election in Bengal along with the accusations against the state government that it failed to control the same, therefore, not only serves the ‘Hindutva’ brigade’s objective of victimising Hindus and spreading fear and hatred in their minds but also provides a “relevant” ground to the brigade’s leaders to call for President’s Rule in Bengal. 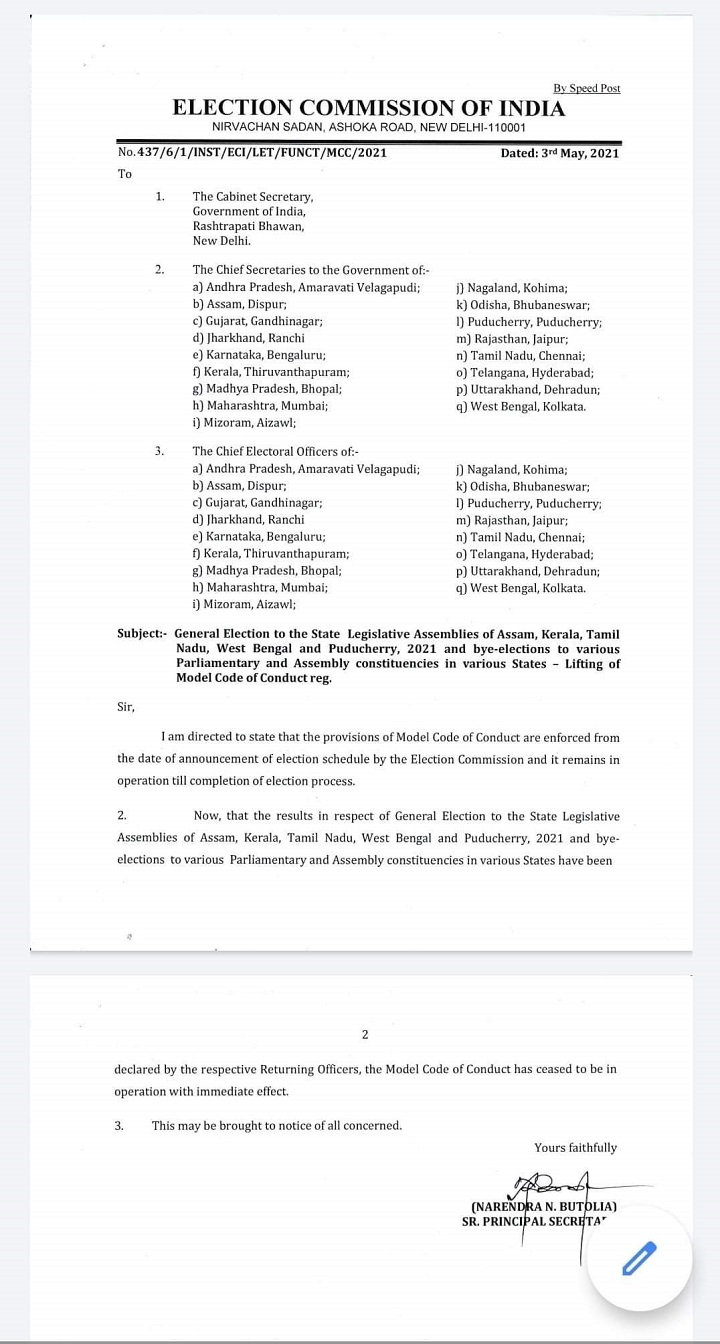 A notification by the Election Commission

Mala fide intention of the centre can also be established by examining the pattern of its behaviour after every state election. Each time a state election went against BJP, the party currently running the central government, cries for President’s Rule in the state erupted. It happened after Indian National Congress secured a majority in Rajasthan. Plea was also filed for declaration of President’s Rule in Shiv-Sena run Maharashtra citing bad governance and bias after Sushant Singh Rajput’s death and the demolition of Kangna Ranaut’s office in Mumbai. Nishikant Dubey, a BJP Member of Parliament, also sought President’s Rule in Kerala citing state endorsed violence on BJP and RSS supporters, including women and children. While fortunately none of these attempts could be made successful, Article 356 seems to be a ready-made solution to the problem of losing a democratically conducted state election.

The Bharatiya Janata Party (BJP), which currently runs the government at the centre, had also implemented other methods to obtain power undemocratically in states where they lost the elections. There have been allegations that it indulged in horse-trading to usurp power in states like Karnataka, Madhya Pradesh and Maharashtra. In Maharashtra, the governor secretly and hurriedly performed the swearing ceremony of BJP’s Devendra Fadnavis despite Shiv Sena’s Uddhav Thackeray being declared the Chief Minister by the Congress-NCP-Shiv Sena coalition. Fadnavis quickly resigned from his post when the Supreme Court ordered a floor test to check his majority support. BJP’s attempts at circumventing the democratic and federal fabric of the Constitution to impose their governance on unwilling citizens is the usual plan they follow after losing an election. Inciting and encouraging calls for President’s Rule in Bengal is nothing but a part of this plan. The chain of identical incidents resorted to by the BJP clearly exposes mala fide intention of the centre which shall make any Presidential proclamation in Bengal ousting a majority-holding government ultra vires and unconstitutional.

Political violence in India, especially in Bengal is a deep-rooted vice. It was unleashed by the Congress upon the Left supporters. CPIM during its rule used it to eliminate workers and supporters of Congress and later TMC, also Naxalites and supporters of other left organisations. The Sai family massacre is infamous for the brutal murder of Congress supporters. Student activists and protesters too were and still are not spared by the state-party machinery. This culture had been carried forward by the TMC in their attacks on their opponents which mainly consisted of CPM supporters in the previous years. With the dramatic rise of the BJP in the state, though not remotely close to what the centre and BJP-controlled media had been propagating, TMC’s violence against BJP after winning the election is in keeping with the horrific tradition. However, the violent clashes like every other post-election violence are political, not communal. The BJP too, after being humiliated by the election result, is provoking and inciting the post-result violence and giving a communal spin to its clashes with TMC cadres. Its central and state leaders, their sponsored media and the infamous IT cell are spreading fake pictures and videos with provocative communal messages to create chaos and instability in the state to emphasize on their demand of imposition of President’s Rule which began even before the new government took oath. As we unequivocally condemn the culture of unleashing violence on opposition political workers after winning elections, it is also important to beware of the wolf that is planning to grasp power in our State through the backdoor by turning the political clashes into communal riots. While we raise our voice against the violence perpetrated by the TMC, we must at the same time resist the clamour of the right-wing rowdies as exemplified by the widely circulated tweet of Kangana Ranaut arguing that the Prime Minister must show his ‘virat roop’ of ‘early 2000s’ — which besides being an admission of Narendra Modi’s involvement in the 2002 Gujarat riots, is also a call for another Gujarat like genocide of minorities in our state.