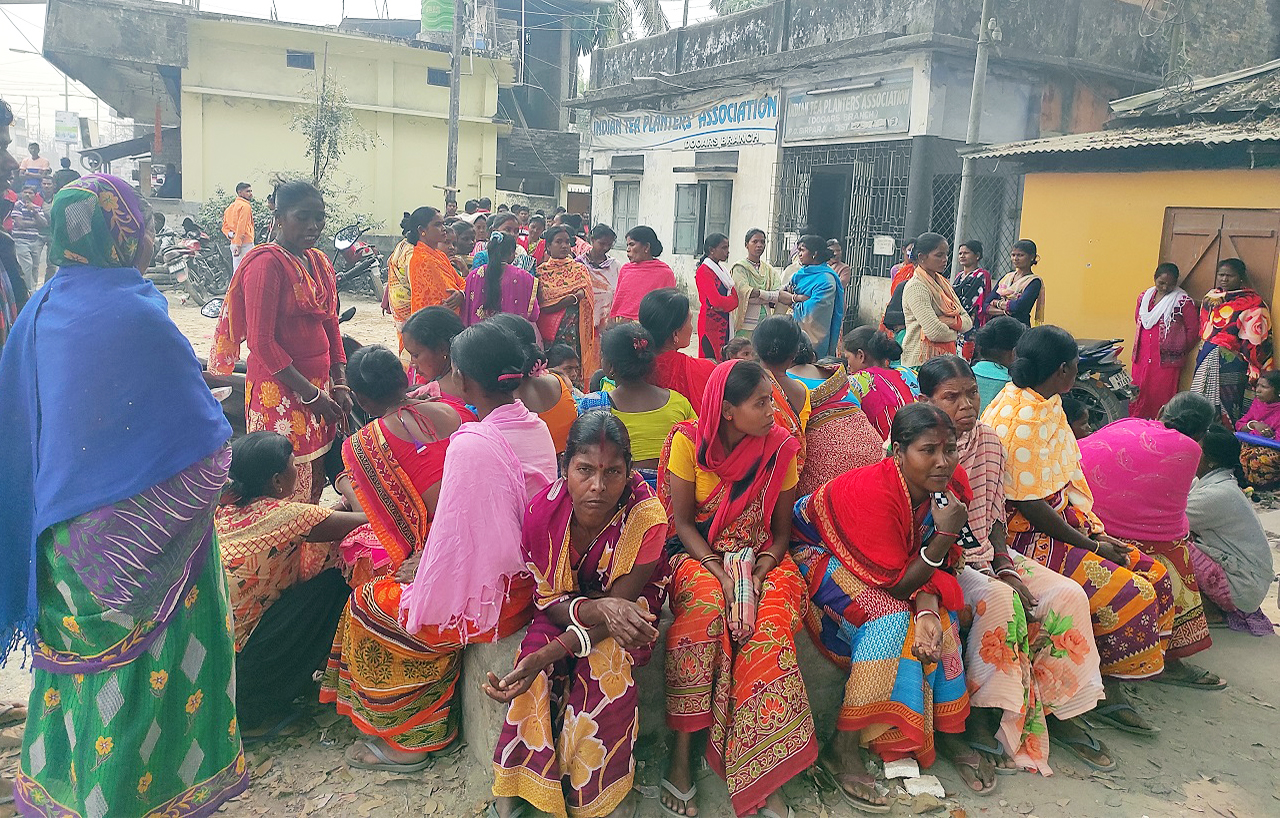 Hundreds of workers of the Jateswar Division of Birpara Tea Garden have begun a struggle to prevent the illegal and unjust takeover of their garden by Merico Agro Industries Ltd. According to the workers, they have put in a lot of effort to turn the garden into a paying venture, after it was abandoned by the Duncans. Now that it is in profitable condition, a new greedy owner is planning to take over the garden. The tea garden workers demand payment of total dues amounting to Rs. 6,33,83,000 be paid to them before takeover of the garden by the new owner.

About 1300 workers of the Jateswar Division of Birpara Tea Garden have begun a struggle to prevent the illegal and unjust takeover of their garden by Merico Agro Industries Ltd. They have read from the newspapers that a meeting has been organised by the West Bengal Labour Department between trade union leaders and the management of Merico Agro Industries Ltd. They received no information of this meeting. Nor were they consulted in any way. Also present at this illegal meeting was local MLA, Manoj Tigga.

Birpara tea garden (GP – Shishujhumra, Dist – Alipurduar) was abandoned by the Duncans Pvt Ltd in 2015. It was temporarily opened in 2017 by Duncans , but was again abandoned in September 2019. After this, the Jateshwar Division of Birpara garden made a collective of their own to run the garden. 1300 workers started working on 405 acres. Since then, the workers have received Rs.10 per kg for plucking leaves. Thus, many workers were able to earn around Rs 250-300 per day during the season. The collective started saving right from September 2019 and has now successfully saved so much by selling green leaves that each tea garden worker of Birpara Jateshwar division received Rs 11280 as bonus from the surplus savings on October 7, 2020. They have also recently received money for their paid leave (“saal chutti”) during the off season. Workers feel the past year has been better for them than even when Duncans was there.

On 13 February 2021, in a workers’ meeting in the garden, the tea garden workers came up with the following 3 demands:-

According to the Tea Board, the total dues which needs to be paid to the workers are Rs. 6,33,83,000 (till 2016- gratuity not included). If gratuity and interest is included this amount would be more than Rs.10 crores. The workers have been only paid an interim relief of Rs 1,76,44,000 by the government of West Bengal due to a Supreme Court order. The 2623 workers of the Birpara garden have not been paid their Provident Fund dues since last 20 years. They have also been not paid their gratuity since 2007.

The workers are especially upset about the agreement that took place between so called trade union leaders and Merico Agro India Limited in the presence of the Labour Department because this is in contravention of both High Court and Supreme Court orders .On 20 September 2016, in a case filed by Duncans Industries Limited (MAT 562 of 2016), the High Court gave an interim order that states as follows:-

The 7 gardens (Lankapara, Gairganda, Tulsipara, Hantapara, Dumchipara,Birpara and Dimdima)  thus belongs to Duncans and they are not allowed by Court Order  to give these gardens to any other owner. They are to run the gardens and return dues to workers.

There is also a Supreme Court order (CONMT.PET.(C) No. 16/2012 In W.P.(C) No. 365/2006), in which the Supreme Court had ordered that workers in over 50 closed and abandoned tea gardens (including the 7 Duncans gardens) in 4 states to receive all their dues , including Provident Fund and gratuity. Also, each tea garden owner was ordered on 11.12. 2019 to deposit an amount of Rs.2 Crores which to this date have not been deposited by Duncans, Merico or any other of the tea garden owners.

According to the workers of Jateswar division, they have put a lot of effort to turn the garden into a paying venture, after it was deserted Duncans. Now that it is in profitable condition a new greedy owner is wanting to take over. The workers are angry with the management as well as the government, and do not have any faith in the new employer who didn’t even consulted with them before taking this decision.

So, the workers have decided that they will not allow any company to enter the garden unless and until all their demands are fulfilled.

Today, the workers have met the MLA, Manoj Tigga and informed him about their intentions. They have also sent a letter to the Labour Minister Shri Moloy Ghatak, and to the Additional Labour Commissioner and have given a deputation to the Assistant Labour Commissioner at Birpara. 15 women workers are meeting the police and teams of workers are going to the BDO and DM.

Updated on 16 Feb : Today, over 500 tea garden workers from Birpara tea garden gathered at the plantation’s factory as the Merico Agro Industries Ltd tried to take over management of the garden illegally. The tea garden workers demanded that the new employer should talk directly to them, instead of holding secret meetings with a select few so called union leaders. They insisted that the management must clarify how their dues of around Rupees 10 crore would be paid to them.

While the new employer seemed ready to negotiate at one point, the arrival of a vested TMC union leader led to a change in stance. Using the large police force present, the management with the support of a section of trade union leaders refused to negotiate. The tea garden workers’ representatives were not even allowed inside the factory.

TMC goons harassed tea garden workers and threatened them to leave the factory. Local MLA Manoj Tigga, as well as MP John Barla were also heckled and chased away.

Workers of Jateswar division along with the support of a large section of main division workers have decided to continue the struggle with total non-cooperation with the management, as the takeover of the garden is in contravention of a High Court order that forbids Duncan India Limited from giving the garden to any other owner