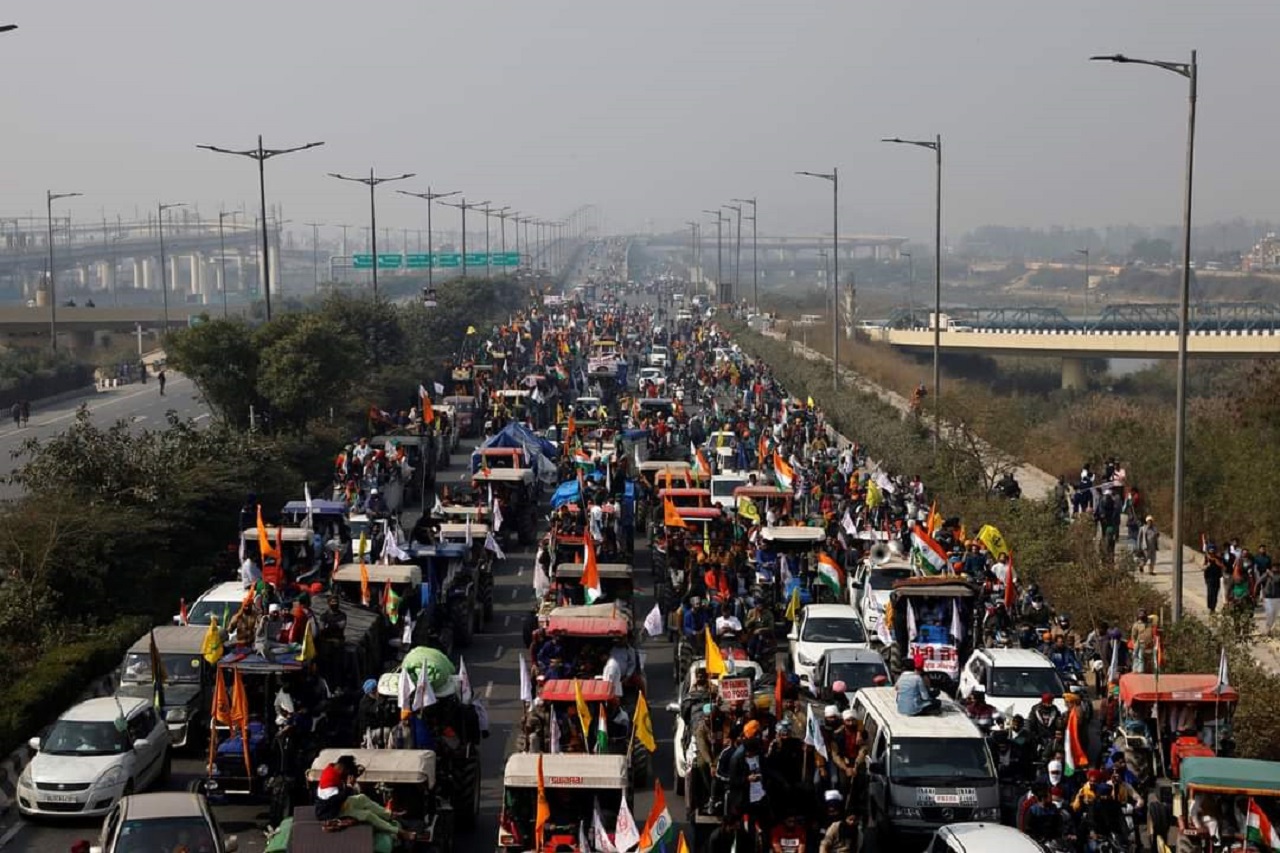 The lessons of the Indian farmers’ struggle

The Farmers struggle and its partial advance has shown us the way. Strong movements from below can have the potential to take on the Hinduvta juggernaut much more than stitching electoral alliances. What will be the fate of this movement six months down the line? We don’t know but it is worth recalling the ancient Chinese proverb “a journey of a thousand miles must begin with a single step”, writes Sushovan Dhar.

No other Republic Day witnessed such unprecedented levels of public claims over their nation. The streets of Delhi were enlivened with spontaneous marches of hundreds of thousands of peasants who wanted a serious say in Res Publica or public affairs. Within a bouquet of lame excuses intended to stop the peasant march, one had been particularly ironic. That this demonstration was a “conspiracy” to defame India before the world by way of doing a tractor parade in the capital on Republic Day. The struggling peasants proved that they held high the banner of the “world’s largest democracy” when the present regime is hell bent at trampling down and doing away with whatever democratic values are left in the country.

Earlier, in an interesting twist to the tale, the Union government on January 20, proposed to suspend the three contentious farm laws for one and a half years and set up a joint committee to discuss the legislation at the tenth round of talks with farmer unions. However, Samjukta Kisan Morcha rejected the offer the very next day. It resolutely clarified the continuation of the movement till the three anti-farmer laws were completely repealed. The AIKSCC was also determined to carry out its scheduled Tractor Parade on the Republic day.

A few days ago, the Supreme Court had expressed intentions to stay the implementation of the controversial agricultural laws while proposing to form an independent committee chaired by a former Chief Justice to “amicably resolve” the stand-off between the farmers and the government. Of course, there were serious questions about the “independence” of the committee nevertheless, the first signs of backing down were obvious.

Given its belligerent and antagonistic attitude of the present current government – more so after it was elected for the second time in 2019 – the Union Agriculture Minister, Narendra Singh Tomar’s announcement might have appeared a little unusual but not entirely surprising. The government hoped that this announcement would force the unions, determined to take out a tractor rally on Republic Day to rethink their months-long agitation and vacate their blockade of the national capital, tamely. Various measures, including threat and intimidation, to dissuade the farmers were tried and tested earlier but it was all in vain. In an attempt to discredit the agitation, a section of the ruling dispensation hurled accusations of infiltration by Sikh separatist elements. This foul play resulted in a backlash and the government ministers in charge of negotiations with farmers’ unions had no options but to dismiss the allegations, washing their hands off.

The continued agitation by the unions, the imminent nature of Republic Day protests and the highest court’s refusal to ban it were just the immediate reasons for the compromise formula. A desperate and a last ditch effort to contain this growing agitation which can potentially spread to other parts of the country, more vigorously. The fascist brigade’s parent organisation, i.e. the RSS was also nervous about the indefinite continuation of this well organised protest. Suresh “Bhaiyaji” Joshi, the number two of the Sangh Pariwar, expressed his apprehensions about the stability of the government in the face of such resolute defiance, in an interview to the Indian Express.

Can this be termed as a partial advance? Sure. Are there reasons to celebrate? Of course, yes. While it is important to abstain from being overwhelmed or getting carried over, there are enough reasons to feel confident about this collective action that has put the government on a back-foot. Certainly, the credit goes to millions of peasants of this country who relentlessly fought with their backs on the wall. The peasantry is clearly fighting for a control over its own destiny (lives and livelihood) against corporate control of agriculture ushered in by this government. Neither the deep agricultural crisis engulfing the country since the last three decades which has led to over 3 hundred thousand farmers committing suicides due to severe indebtedness nor the chronic rural distress which forces thousands to leave their villages to migrate towards urban centres in search of an uncertain future can be undone so easily. We surely need a larger political battle to overcome that but the current struggle is an earnest way towards that direction. It has instilled hopes in the minds of millions who want to fight this fascist regime and regain the democratic soul of the nation.

The recent farm bills plus the new Labour Codes are attempts to carry on an unprecedented degree of reforms that gives the big bourgeoisie a free hand to run the economy. No doubt they are backing it very strongly. While the labour codes are an attempt to flexibilise employment by giving owners the right to ‘hire and fire’ employees and do away with minimum legal guarantees for the workers, the former can be seen as a response to the agrarian crisis from the Right. They are ably supported by the media and a pet group of economists – so impressed about the new farm acts – attempting to craft popular public opinion about the laws. Many have gone to the extent of heralding these laws as something that will revolutionise the Indian agricultural sector. Fortunately, the farmers are oblivious towards such enlightened counsel.

The strength and the prestige of this agitation stems from the courage and tactical ingenuity of a movement that has a real economic base. It is an endorsement of the fact that the neo-liberal agenda, internalised by all political parties in India including sections of the mainstream Left, continues to be resisted from below. The resilience shown by the peasants, mostly from Punjab and Haryana, and their organisations are exemplary and frankly, much more radical than the politics of the existing Left parties.

The crisis of the Left

The crisis of the Left partially explains the relative lack of inertia on the part of the trade unions and the overall workers movement to come out in full support of the current protests. There have been minuscule attempts by workers to join in unison with the agitating farmers and one fears that they are squandering a golden chance to launch similar offensives, in their own interests, just when the iron is hot.

Unfortunately, the major trade unions of the country are controlled by one political party or the other. In the absence of genuinely independent organising, these unions instead of acting as authentic expressions of the working class, function as the transmission belts of their “parent organisations”. Perhaps, this party-unionism explains the weak working-class response to the current farmers’ movement. Can the situation be reversed? Difficult but not impossible! Is it worth giving a try? Yes, we have no other choice! Without the self-organisation of the class it has already conceded a lot, as evident in the current scenario and historically too.

This movement is very important for the left. While any attempt to see this as a peasant uprising to capture state power would be fool-hardy it is also not “a movement of only rich peasants” as per certain sections of the left or more precisely, some adherents of a stage-ist Socialist Revolution. The farmers are fighting for their immediate and longer term survival. It would be criminal for the left either to be steeped in deep sectarianism or squander this opportunity to form a redoubtable opposition to Hindutva coming out of their time-worn ideological cocoons. We must seize the moment and make all efforts to transform these protests into wider peoples’ struggles against the fascist regime and to give it an anti-capitalist character. The current momentum can be deepened by including the demands of various sections of working people. Demands for employment generation, food security and food sovereignty among others would serve to reinforce the appeal and strength of this movement among the masses across different regions. Pursuing these demands would not only help the movement to gain support among the working people, but it will also push the representatives of the sections of the rich peasantry to the margins. There is an urgent need to build solidarity with the working-class struggles going elsewhere.

The current struggle also helps us to throw light on another important question. Can the fascist forces be defeated by forming electoral coalitions or are they best dealt with by powerful mass mobilisations from below? While not entirely ruling out the possible electoral scopes, we need to pay attention towards the evolution of Indian elections and the trajectory of the Right wing. The Sangh Parivar and the other Hindutva forces have maintained a consistent ultra-right direction since the 1950s unhindered either by electoral defeats or any alliance with “secular” forces. One vividly recalls the optimism of a section of the liberals when the extreme-right entered the Janata party to form the government in 1977. With Vajpayee as the foreign minister in Morarji Desai’s cabinet many saw the Hindutva project contained, tamed and civilised. History has treated such optimism with contempt. No electoral misfortune is enough to uproot this agenda and any genuine battle against Hindutva project must acknowledge this. A long-term political project to deal with it must be based on class struggle and our search for a lesser evil, i.e. relatively ‘harmless’ bourgeois allies, will act as serious roadblocks to vibrant opportunities for class agitation and mass movements.

The Farmers struggle and its partial advance has shown us the way. Strong movements from below can have the potential to take on the Hinduvta juggernaut much more than stitching electoral alliances. What will be the fate of this movement six months down the line? We don’t know but it is worth recalling the ancient Chinese proverb “a journey of a thousand miles must begin with a single step.”